Feminist Lens: A Perspective - The Awakening

During the late nineteenth century, a woman’s place in society was confined to the reverence of her children and constant submission to her husband. The Awakening, by Kate Chopin is a novel about Edna Pontellier whose life was embraced through the frustrations and triumphs as she attempts to cope with the strict cultural demands in which she was confined. This essay focuses specifically on the feminist critical perspective, however, The Awakening can be perceived to also observe the historical or psychoanalytical critical perspectives as well.

Don't use plagiarized sources. Get your custom essay on
“ Feminist Lens: A Perspective – The Awakening ”
Get custom paper
NEW! smart matching with writer

First, the story can be interpreted using the psychoanalytical perspective by the using the events and emotions experienced by the characters within.

According to South University Online (2010) defines both perspectives as follows: “the psychoanalytical perspective aims to reveal the influence of the unconscious in the text’s plot, setting, conflict, symbols, point of view, language, and character development” (p.2). Whereas, the “historical perspective, look at the political, social, racial, cultural, and economic structures in place as well as the traditions and counter traditions of the literature.

” (p. 4) Consequently, Edna battles the pressures of 1899 that commanded her to be a submissive and devoted housewife, while contravening the stereotype of a “mother-woman”. The Awakening supports, as well as, inspires feminism by as a way for women to challenge their gender role, embrace symbolisms implied in life, and establish their individual identity.

Feminist theory argues that “to say gender is socially-constructed means that ideas about women’s and men’s roles, behaviors, and abilities come from human choices rather than from actual physical differences” (South University Online, 2010, para.

5). Chopin gave Edna’s role as a feminist in many ways by her indulging her more selfish needs. During a conversation with Madame Ratignolle; “she would never sacrifice herself for her children, or for anyone” (Chopin, 2005, Chapter 16, para. 10). Subsequently, this embodies the theory that if Edna were to give up her soul, the very base of her womanhood and what she stands for in life, then her world and existence would be over. Therefore, she would end up drifting away into the void of commonality.

Edna believes in herself and senses her inner individuality by moving forward to achieving her sexuality and opinions. She does so by strongly imposing the beliefs of feminism to intimately discover one’s mind and body, the ultimate freedom. Expanding on the many different definitions of feminism, there are “Clues showing beliefs about gender are in every aspect of the text, and you can choose which thread you care to examine.” (South University Online, 2010, para. 2). The focus remains on what Edna is not: “…Mrs. Pontellier was not a mother-woman” (Chopin, 2005, Chapter 4, para. 4). This is Chopin’s way of defining Edna of all the things she is not, thus showing Edna’s rebellious power against what was considered “normal” for women. For example, the relationship between Edna and Leonce Pontellier demanded a conflict due to Edna challenging the ideas as her role to be restricted to a wife and mother.

Subsequently, Chopin narrates the feelings and emotions of Edna by the use of symbolism by the mention of birds to suggest that Edna has finally found her Awakening. From the start of the novel to the very end, the birds play a very dominant part in the imagery of Edna’s Awakening. The parrot yells: “Allez-vous en! Allez-vous en! Sapritsi!” (Chopin, 2005, Chapter 1, para. 2), translated in Edna’s language, “Get out! Get out!” is a clear clarification of Edna’s way to communicate to her husband Leonce. Thus, the parrot is representing Edna by symbolizing being confined in the cage of motherly and wifely duties craving to be released, but held back by the bars of society. The urge to break free from her husband’s display that Edna is nothing but labeled as property, his possession. Clarified by Chopin, “He looked at his wife as one looks at a valuable piece of personal property which has suffered some damage” (Chopin, 2005, Chapter 1, para. 10). Chopin also uses the bird to symbolize how a caged bird eventually finds itself seeing no end in sight, thus confirming the existing bars and losing all sense of its ability to spread its wings. Mademoiselle Reisz tells Edna, “The bird that would soar above the level of plain tradition and prejudice must have strong wings.

It is a sad spectacle to see the weaklings bruised, exhausted, fluttering back to earth” (Chopin, 2005, Chapter 27, para. 12). This advice not to be taken lightly, but to say that if Edna does not waver in her determination to burst out of her deteriorating cage, she will never gain the strength to defy the stereotypes of submissive women. Therefore, the story providing what the future will hold for Edna and how it may set her free. Furthermore, Chopin cleverly introduces Alcée Arobin to symbolize a kind of bird. His name means “A – robin”. Suggesting he, like a robin, is a bird with no regard to social restrictions that has the freedom to fly from nest to nest at will. Although he is not in search for love, but rather on a quest to obtain his ultimate Awakening life has to offer. Alcée speaks to Edna in terms “that astonished her at first and brought crimson to her face” (Chopin, 2005, Chapter 26, para. 2).

Intrigued, Edna immediately appreciates and even envies his lifestyle – free as a bird, no cages holding him back, doing whatever pleases him. Her envious behavior causes her to crave the way of Alcée by gliding through the world with a sort of sophistication, liberation, and inner peace to be free. Edna defines her earliest kiss with Alcée as “the first kiss to which her nature had really responded. It was a flaming torch that kindled desire “(Chopin, 2005, Chapter 27, para. 20). No doubt, this evanescent affair revolutionized Edna’s inner inhabitations to let go, to be free with her sexuality by showing complete independence and defying society. Finally, the symbolic representation of the bird becomes the ultimate conclusion to Edna’s passage to obtain her independent identity. Chopin explains that Edna is like the “bird with a broken wing” that she observes, “beating the air above, reeling, fluttering, circling disabled down, down to the war” (Chopin, 2005, Chapter 39, para. 23). This describes the ultimate struggle in Edna’s constant search to find her inner identity of independence however, ended in suicide.

Her suicide portrays the unfortunate deterioration of this otherwise feminist piece of literature by allowing Edna’s action to somewhat discredit the classification of feminism. Edna maintained many solid qualities needed to be successful in her feminist way of thinking and might have lived a longer life if she only obtained one simple quality required. Edna’s beliefs were that if she was not able to obtain her wants immediately then all her maneuvers within her life were considered worthless and insignificant. This explained after Robert leaves for Mexico. Edna feels as if his “going had some way taken the brightness, the color, the meaning out of everything” (Chopin, 2005, Chapter 16, para. 2) In other words, Edna allowed Robert as her connection to her vulnerability while keeping her feminist stance towards establishing her inner identity. “She felt no interest in anything about herself” (Chopin, 2005, Chapter 18, para. 5) because with never understanding this concept, she cannot grasp her femininity entirely. After Robert departs from her side, Edna finds “there was no one thing in the world she desired” (Chopin, 2005, Chapter 39, para. 22).

Edna, descending herself into believing that life is a steady stream of disappointing setbacks that will never change, thus ultimately thinking that there is nothing further she could do to bring about any further change within her life. Throughout, The Awakening, Edna grows gradually depressed and submissive behavior toward life due to her “inability” to express her belief that she will remain unhappy forever unless she gets exactly what she wants. Even though Edna’s efforts to liberate herself from an oppressive society remain respectable, her suicide is an appalling waste of her struggles, thus defying the very personification of feminism.

In conclusion, The Awakening is known as the story of a woman who is determined to be awakened in every sense of the word, while refusing to accept the gender role that society used to maintain control and power over women. Chopin’s use of symbolism not only inspires readers in ways never imagined possible, but showed the harsh reality of what could happen if the value of self-worth is never obtained or recognized. Therefore, with Edna only in her death is Leonce and society completely powerless to her promiscuous ways.

Feminism giving the main focus of Edna’s life by her achievement of true empowerment, which was a position not often qualified by woman during the nineteenth century. Even in the 21st century where social restrictions are nearly a thing of the past, just because we are considered “a free people” does not mean man or woman will conquer the struggles placed in front of them. With limited social restrictions set in place, it does on guarantee a person the will to find their identity, inner peace, and the strength to fight for what they believe in. However, Edna with all the restrictions and constraints placed in front of her, she defied the voice of reason and remained alive even after death. Chopin narrates: “The voice of the sea is seductive, never ceasing, whispering, clamoring and murmuring, inviting the soul to wander in the abysses of solitude” (Chopin, 2005, Chapter 39, para. 23).

Feminist Lens: A Perspective - The Awakening. (2020, Feb 05). Retrieved from https://studymoose.com/feminist-lens-a-perspective-the-awakening-essay 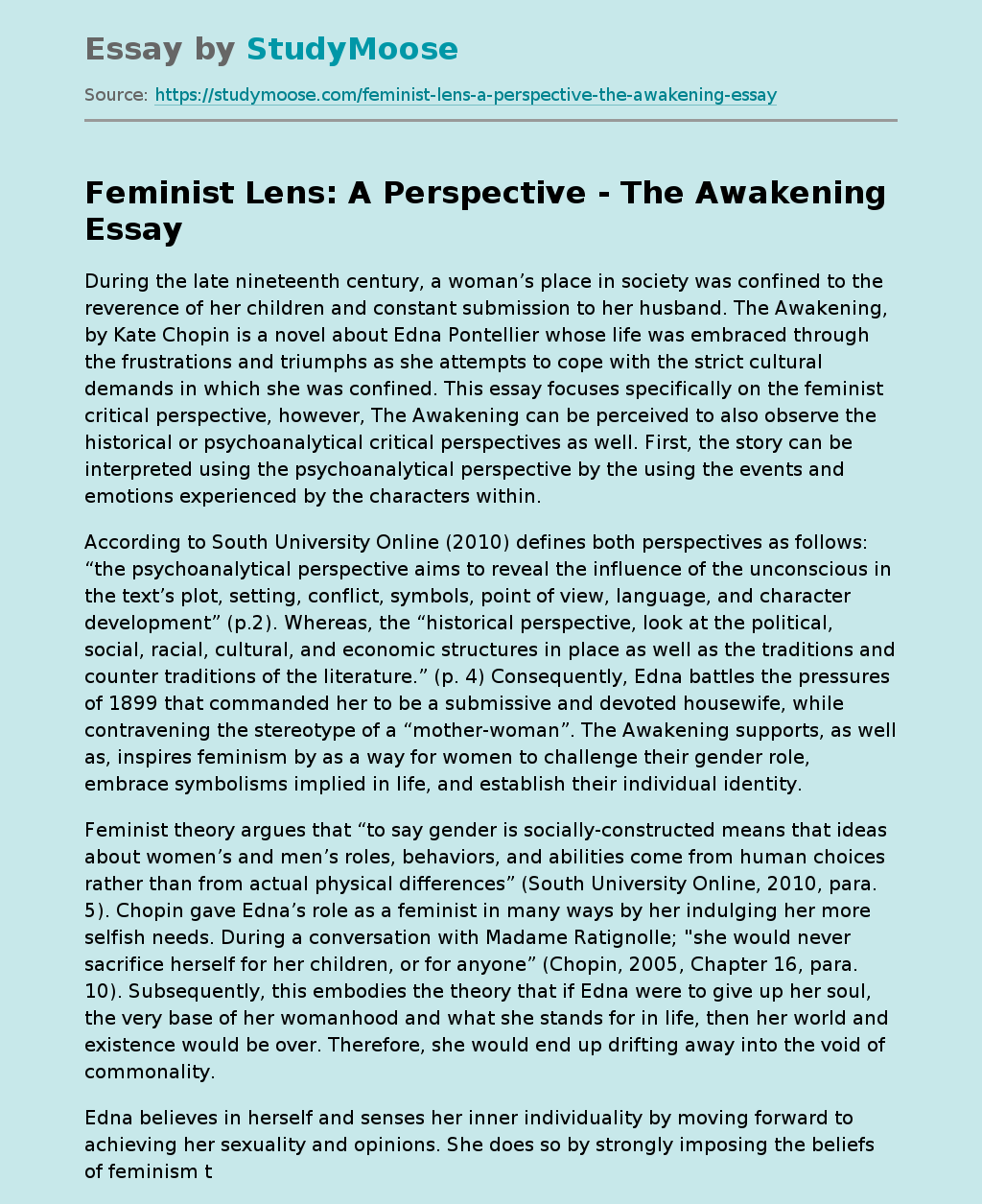