The Age of the Disposable Tissue

In both stories, The Crucible and Fahrenheit 451, people are treated as disposable tissues. Being treated like a disposable tissue is when somebody uses another person for what they want, and then getting rid of them when they don’t need the person anymore. In The Crucible, characters are accusing other characters of witchcraft in order to relieve themselves of the blame and guilt. In Fahrenheit 451, characters get what they want out of their lives, and then they try to escape life by committing suicide.

Turn in your highest-quality paper
Get a qualified writer to help you with
“ The Age of the Disposable Tissue ”
Get high-quality paper
NEW! AI matching with writer

In The Crucible, characters are accusing other people within Salem of witchcraft in order to relieve themselves of the blame and the guilt. One person who starts the blaming is Abigail Williams. She is the first person to pass the blame onto other people. The person whom she accuses is Tituba, the slave. This first accusation shows the validity of the disposable tissue theory when Abigail passes the blame from herself to Tituba.

A second example is when Tituba and Abigail together accuse Sara Good and Sarah Osborne. Both Abigail and Tituba together are feeling a lot of pressure to the community to confess to their sin, but they both choose to pass the blame onto other members of their community. Both of these accusations by Abigail Williams and Tituba exemplify the disposable tissue theory when they use Goody Good and Goody Osborne to pass off their blame, and then both Goody Good and Goody Osborne are hung.

A third example is when Abigail Williams accuses Elizabeth Proctor of witchcraft. Something that Abigail wants to come out of this accusation is for her to be able to continue her relationship with John Proctor, Elizabeth’s husband. Abigail has had an affair with John, and she wants to resume this affair. In order for her and John to continue an affair, Abigail must get rid of Elizabeth Proctor. This accusation further exemplifies the theory of the disposable tissue because Abigail uses John for an affair, then throws away his wife in order to get what she wants. All three sets of accusations show the validity of the theory because characters in The Crucible use other characters to get what they want, and then throw them away, or in other words, they are hang.

In Fahrenheit 451, characters are trying to get everything they want in life, and then they throw it all away when they don’t want it anymore. One person who gets what they want is Mildred Montag, Guy Montag’s wife. She has three televisions, which Guy works hard to provide for her, and she also has seashell radios in her ears. With these things, Mildred doesn’t have to have a care in the world. All she wants to do is sit down and talk with her TV’s. With her seashell radios, she doesn’t have to listen to anybody speak to her. After a few days of living her life with these things, she decides that she doesn’t want to live anymore, and she tries to commit suicide. She takes a bottle of sleeping pills, and she throws her own life away. Guy finds out and has a man come and vacuum her stomach out, so she doesn’t die. This shows the theory of the disposable tissue when Mildred gets what she wants out of her life, and then she tries to throw it away when she is done with it by trying to commit suicide.

A second example is when Mildred is with her friends before Guy reads the “Dover Beach” poem. One of Mildred’s friends is talking about her husband who is fighting in the war that is happening during the story. She is saying how if either of them dies, they agree not to feel sorry for each other and that they would move on right away to find another spouse. This exemplifies the theory of the disposable tissue because they are using each other as a spouse, just to have temporary love, and they are willing to throw their love away if they die and they would be ready to move onto another person. A third example is when the mechanical hound can not find Guy Montag after he runs away, and the TV station is using a random stranger walking the sidewalk as a target to kill to end the chase.

Guy is running away after he burns his fire captain, Beatty. The police squad sends out the mechanical hound to find and kill Guy, but Guy changes his smell and ran too far away for the hound to find him. In order for the TV station to keep the watchers interested, they must find somebody walking the street to kill and make it look like they find and kill Guy Montag. This further exemplifies the disposable tissue theory when the TV station uses the stranger to end the chase, and then throws his life away as the mechanical hound kills him. All three of these examples show the validity of the theory because characters in Fahrenheit 451 use other characters for what they want, and then they are willing to throw it away when they don’t want them anymore.

In today’s world, we find that many people use other people like disposable tissues. For example, in the Connecticut Shooting that happened just a few days ago, a boy used his mother to provide for him, to teach him, and to give him love. The boy then threw that all away when he went on a shooting rampage at his mother’s school and killed her and other students at the school. In the book The Crucible and the book Fahrenheit 451, we see that characters are using other people for what they want, and then they throw it away. In The Crucible, Abigail Williams starts a chain of accusations where she accuses other people of witchcraft in order to pass of the blame and guilt from herself to others.

She then throws their lives away when they are hanged for witchcraft. In Fahrenheit 451, Mildred, Mildred’s friend, and the TV station use other people for what they want, and then they are willing to throw it away when they are done with using that person. Mildred tries to commit suicide, Mildred’s friend is willing to give up her husband, and the TV station is willing to kill a random stranger. In both of these stories, the validity of the disposable tissue theory is shown when people use other people to get what they want, and then they throw it away when they don’t want it anymore.

The Age of the Disposable Tissue. (2016, Oct 22). Retrieved from https://studymoose.com/the-age-of-the-disposable-tissue-essay 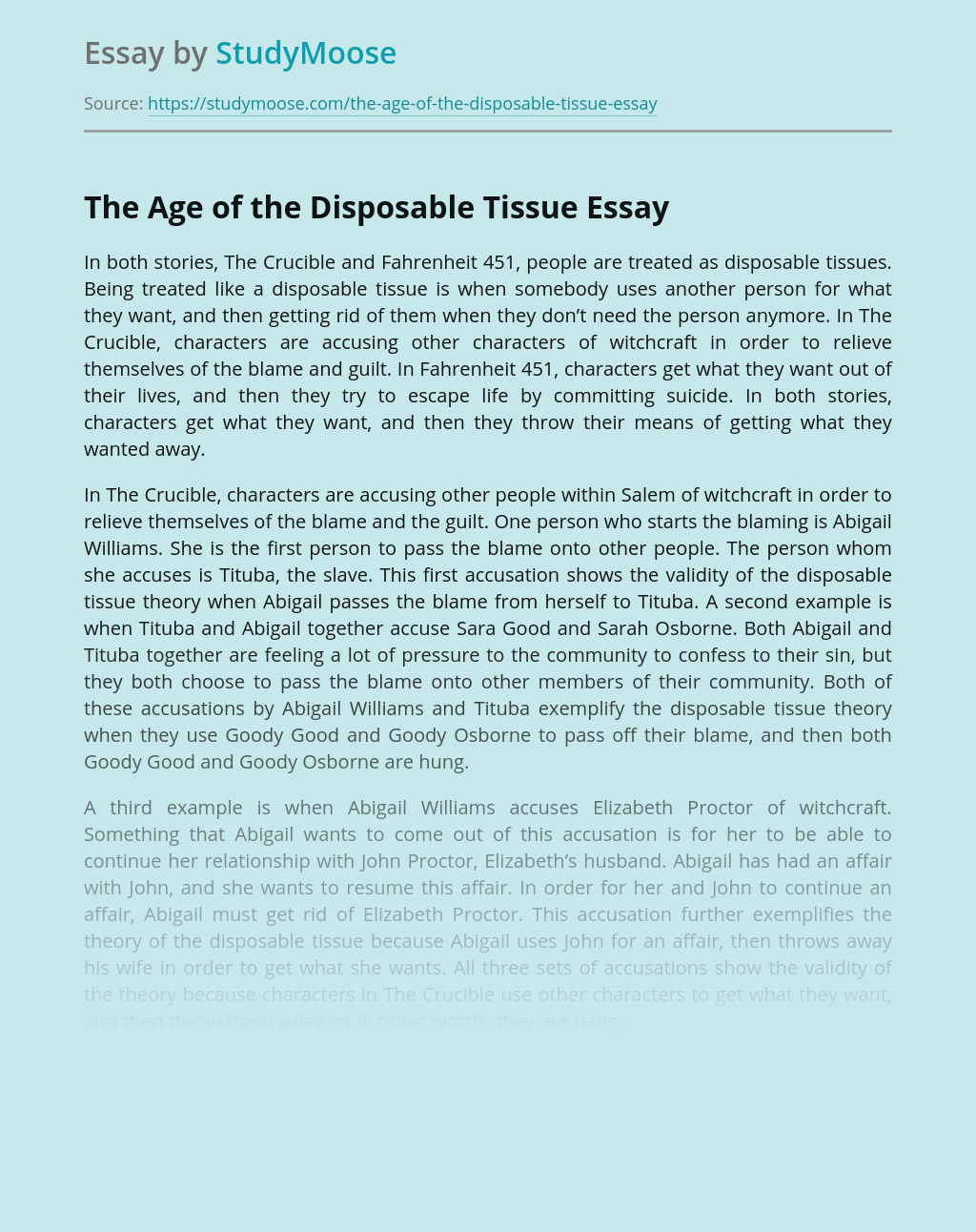 Turn in your highest-quality paper
Get a qualified writer to help you with
“ The Age of the Disposable Tissue ”
Get high-quality paper
Helping students since 2015
Stay Safe, Stay Original