The Administration of Theodore Roosevelt

Theodore Roosevelt was the 26th President of the United States. Roosevelt, who was 42 when he became President after the assassination of William McKinley, was the youngest man ever told to hold that office. “Teddy” or “T.R.,” as he was called, was one of the nation’s most dynamic and colorful Presidents, remembered perhaps as much for his spirited personality as for the accomplishments of his administration (Pringle, 2006).

Roosevelt had tremendous energy and wide-ranging interests. He was a patrician and a reformer, a cowboy and a scholar, a big-game hunter and a conservationist, and a soldier and a Nobel Peace prize winner, As President, he promoted progressive reforms and a strongly nationalistic and expansionist foreign policy.

Don't use plagiarized sources. Get your custom essay on
“ The Administration of Theodore Roosevelt ”
Get custom paper
NEW! smart matching with writer

A popular writer and forceful speaker, Roosevelt coined many phrases that are skill quoted.

He denounced the “malefactors of great wealth” and sought to curb these powerful businessmen by a variety of means. Antitrust legislation was enforced (“trust busting,” as it was called); the Food and Drugs Act was passed; and conservation laws were enacted to keep the nation’s natural resources out of the hands of private exploiters (Beale, 2004).

His domestic program was called the “Square Deal,” from a speech in which he said he wanted “to see to it that every man has a square deal.”

“Speak softly, carry a big stick, and you will go far,” was another of Roosevelt’s sayings. He often applied it in his conduct of foreign, as well as domestic, affairs. When negotiations to acquire the Panama Canal were at a standstill, Roosevelt recognized a rebel government in Panama, made a treaty with it for a canal zone, and authorized digging the canal.

When a crisis with Japan seemed close, Roosevelt spoke softly but sent the “Great White Fleet” around the world to demonstrate the new naval might of the United States. Under Roosevelt, the United States became a major military and commercial power and gained an influence in world affairs (Mowry, 2004).

Roosevelt’s administration saw the beginnings of 20th-century social legislation. Since the Civil War, big business had become monopolistic, operating in total disregard of the public interest. Roosevelt wanted “square deal, no more and no less” for everyone and his administration began a campaign of “trustbusting,” aimed at curbing the abuses perpetrated by big business. In 1902, Northern Securities Company, a railroad trust, was sued by the government under the Sherman Antitrust Act. Eventually, the U.S. Supreme Court held the trust to be illegal and ordered it dissolved. The Elkins Act, passed in 1903, banned secret rebates to favored shippers, a monopolistic practice that had been much criticized.

In 1902, when owners of anthracite coal mines refused to accept arbitration to settle a long strike, Roosevelt threatened to use the army to operate the mines. The owners back down (Harbaugh, 2005). In 1903, the president pushed through Congress a bill to create a new executive department—the Department of Commerce and Labor—whose purpose was to promote industrial growth and improved working conditions.

In addition, encouraged by endorsement at the polls, Roosevelt became more clearly a champion of progressivism. His progressivism, however, was aimed more at the correction of immediate abuses that at any radical change in American ways of life. He urged enactment of workers’ compensation laws, a graduated federated income tax, and federal taxation of inheritances to curb what he viewed as the menace of “swollen fortunes” (Blum, 2006).

He, as mediator, succeeded in bringing to an end the Russo-Japanese War with the Treaty of Portsmouth in 1905. For this accomplishment he was awarded the 1906 Nobel Peace Prize. He also helped to arrange the Algeciras Conference, called to settle differences between Germany and France over Morocco. Roosevelt urged use of the Hague Peace Conference failed to deal with limitations on armaments, he sought Congressional approval for a naval building program he felt necessary for the security of the country (Pringle, 2006). To demonstrate the nation’s preparedness, Roosevelt sent the entire America battle fleet, called the “Great White Fleet,” on an around-the-world cruise.

Furthermore, in 1913, Roosevelt visited South America and explored Brazil’s jungles in search of a tributary of the Amazon called the River of Doubt, which he found and explored for 900 miles of its course. During the trip, he contracted a tropical fever and begged his party, including Kermit, to leave him, as starvation threatened them. When they refused, he insisted on pushing on. The exertion probably undermined his health.

When World War I started in Europe, Roosevelt urged military preparedness and an international tribunal backed by force to execute its decrees. When the Lusitania was sunk, he urged a trade embargo against Germany, assailing Wilson for “weakness.” In 1916, the Progressive party again nominated Roosevelt for President, but he withdrew when the Republicans nominated Charles Evans Hughes (Blum, 2006).

The Administration of Theodore Roosevelt. (2017, Mar 17). Retrieved from https://studymoose.com/the-administration-of-theodore-roosevelt-essay 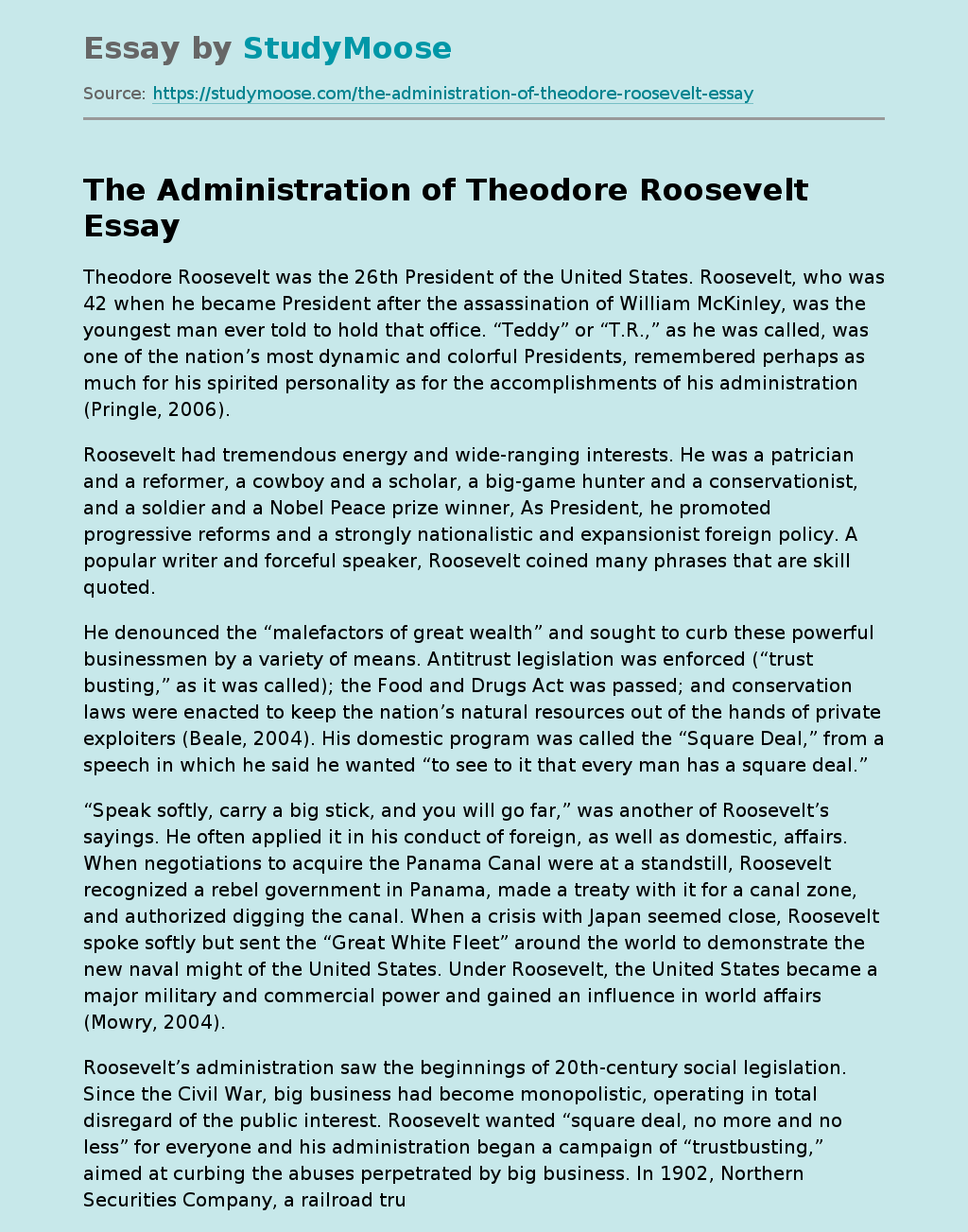