Thank God I am not married

In other words, every male should have the traits of her father, good looking, confidant and romantic. With this “criteria” her search for a man became difficult. “He wasn’t quite good enough for me. ” Oak was obviously interested in her; only her vanity blinded her to what he truly felt. Troy was only interested in her physical appearance while Boldwood only fantasised due to her scheming tactics to win him over. All the while, Oak remained at one with nature, his high status among the community failed to be recognised in the eyes of Bath, although she did admire his skilful hands whilst shearing the sheep.

Don't use plagiarized sources. Get your custom essay on
“ Thank God I am not married ”
Get custom paper
NEW! smart matching with writer

Being stunning and flirtatious, it was all the more difficult for Oak to reach, for she constantly searched for a better man. Unfortunately she found it undoubtedly in Troy. Oak, compared to Baths “ideal” thoughts in a man were shockingly different. Oak is much more simple minded. The full extent of his simplicity can be seen in his proposal to Bath.

It is devout of any romance and as of this, he is doomed to failure in his attempts to woo bath. He offers her a simple life in the cottage where they can play the piano and live happily when this is not what she wants at all. ”

Come… think a minute or two…will you marry me? I can Make you happy… you shall have a piano. ” She wants action and does not wish to settle down and lead a slow life.

Bathsheba is not interested in the mundane and ordinary and wishes to be tied up in romantic adventures. She has a wild spirit and it is not until this spirit is halted that she will be worthy of Oak and able to see his positive qualities. “She was going to be a governess once, only her spirit was too wild”. In the beginning of the book, her views on positive qualities are tainted and unjustified. She sees attraction in the corrupt men such as Troy.

Her superficiality and vanity prevents her from seeing the horrible truth about troy. Oak can see Troy’s faults and dishonesty, but until Bathsheba is educated she will not be able to. Because of his lack of romance, he failed to woo bath. Which is exactly what the superficial Bath wanted in a relationship. Constant wooing and flirtatious behaviour is what she desires. It must be noted though that this is a flaw in Bath rather than in Oak. After she denies his proposal, his flock was slaughtered, his income, everything he owned, the means by which he lived, is lost.

“All the savings of a frugal life had been dispersed. ” Because of this, he had nothing to offer his beloved Bath, and therefore was half-glad she didn’t accept his hand in marriage. Gabriel is obviously very dismayed and the acceptance of this tragedy by Oak in this stoic manner is a reflection of his character. It is an indication of Oaks bright positive attitude, not seeing the glass half empty but rather half full. This incident in particular was looked upon as an excuse, his acceptance of tragedy made him optimistic. “Thank God I am not married”

Therefore, I conclude that Gabriel’s main fault in not being able to win over Bathsheba in the beginning of the book is that he is a simple, caring and calm individual. “He was young man of sound judgement, easy motions, proper dress and general good character”. However, these are not flaws but positive qualities. The problem is that Bathsheba starts off like the populations in the municipal, and has turned her back on the indispensable qualities in Oak. It is only after Bathsheba has experienced much pain and hardship from her vain and superficial actions, she can finally see that what she has done is wrong.

Then, Bathsheba will finally be able to appreciate the wise words of Oak and see that his good qualities are the ones that will manufacture happiness and the ideal life. I would say that the quality that separates Oak’s qualities with many of the society in Hardy’s lifetime and ours, in that he sees other interests above his own. This is a rarity and to find someone like this is a revelation. This is because the human instinct is greedy but Oak shows no sign of this. He is even willing to promote Boldwood so that Bathsheba does not marry troy and get hurt in the process.

This is a true act of selflessness and such acts as this is not common. “He would base his appeal on what he considered the unfair treatment of Boldwood”. Throughout her confusion with men, Bath feels for Sgt Troy, but cannot see his corruptness. Her mind is still not educated enough unlike Oak who can see that Troy will only bring unhappiness. This is another example of Oak’s good judgement and it is seen here that he is on a higher plateau to bath, in that he can see these faults such as in Troy very clearly. He knows that Troy will manipulate Bathsheba and wishes to protect her.

There is dramatic irony present, for she does not see devastating fate foreseen in her future. Otherwise, if she were to stay with Oak, he is the safest option, perhaps not the most romantic, but definitely where true love stands in Oaks eyes. Her thoughtlessness and “care-free” approach remains throughout the book, she expresses this through her non-consideration of consequences and feelings when sending Boldwood the valentine, leading him on and giving him attention made his mind obsessed and bedazzled by her. “When Bathsheba’s figure shone upon the farmer’s eyes it lightened him up as the moon lights up a great tower”.

Oaks mind is very plain, he knows he is the better Shepard and farmer but remains modest and un-vain. He shows his talent well, when he, among all the farmers is the only one with the knowledge to cure the sheep (when they ate too much clover). Because of this, Bath was forced to call upon him for the second time to help; she was to make a decision between her sheep and her pride. At first, the stubborn streak in her character rejected his call of assistance. With no choice in the matter, her way around the problem was to send someone else to ask for help, rather than her do it herself.

This was obviously noted by Oak as he sent the messenger back, asking for a “civil” approach. In doing so he was teaching her a lesson, making her stand up to her self, not to become weak in asking, but to be strong in character. She was to request his aid in a letter. From then onwards he remained on the farm. Another important aspect is when Bathsheba is initially described. All emphasis is on her beauty and vanity and not on important qualities such as a good will. She is seen looking in a mirror and seems only concerned about her appearance. She does not seem to have any positive qualities beside her beauty.

The evidence towards her vanity is as she “looks in the glass”. This is why is use to being the centre of attention and adores it. Therefore, when Boldwood does not take any notice of her and disregards her, it causes her much annoyance as it dents her pride. Bathsheba wishes to be admired by everyone and when this is not the case, she acts upon it to ensure that Boldwood will take notice of her. This is where some of her thoughtlessness and insensitivity is shown. She sends a valentine to Boldwood and does not consider the consequences of her actions. The valentine fascinates Boldwood and his obsession towards Bathsheba begins.

Bathsheba begins to regret sending the valentine as she sees the effect that it ha had on Boldwood. she does show some kinds of remorse and regret, but she keeps that side of her hidden. “His equilibrium disturbed, he was in extremity at once”. It is evidence that Bathsheba has a conscience but does not let herself act upon it. “Concluded that she was herself responsible for Boldwood’s appearance there. The only time I recognised her act of kindness is her excuse for turning down bolwoods proposal, she seems to create a superior image but contradicts herself when turning down bolwood’s proposal by saying “you’re too dignified to suit me for. 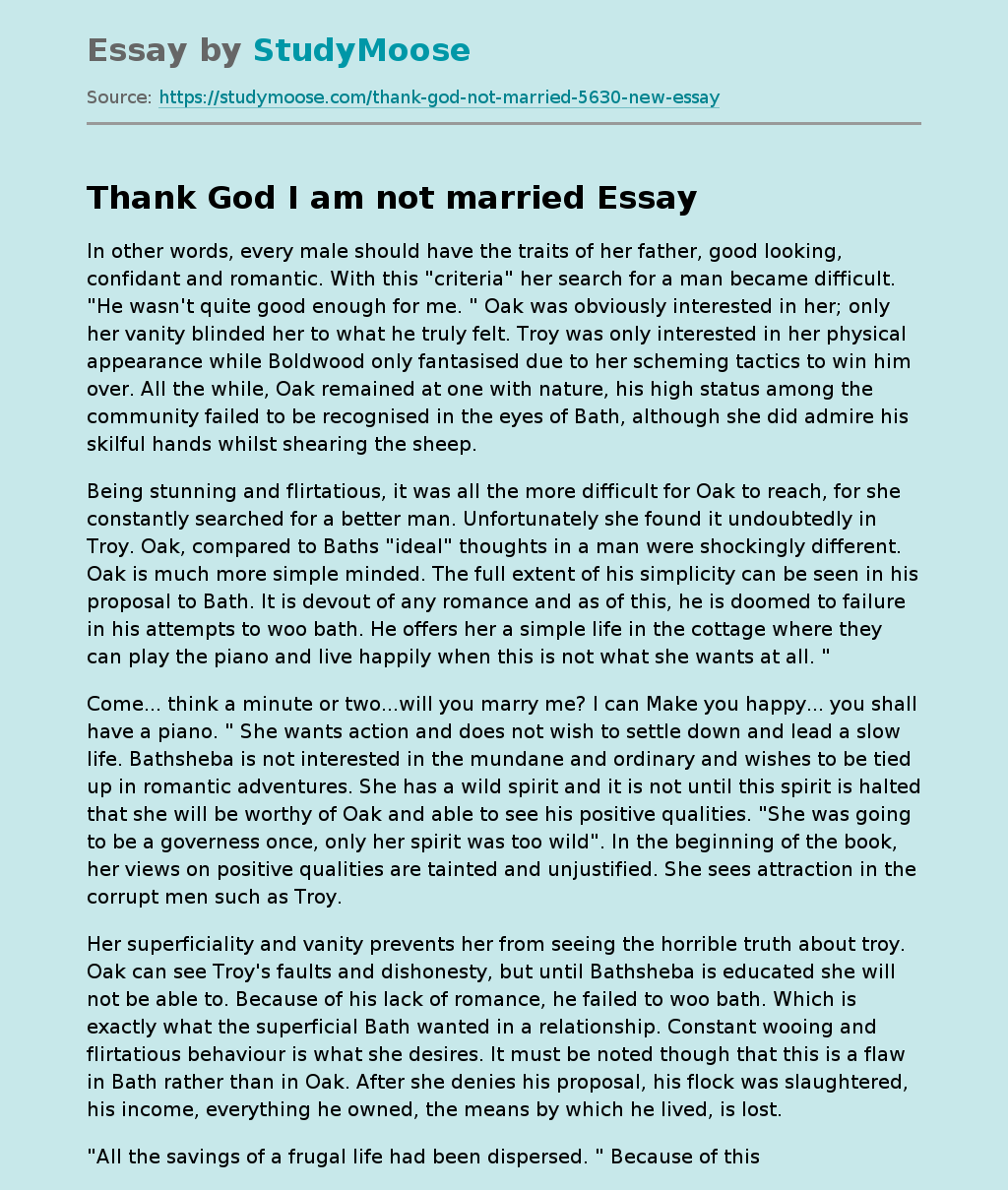