The use of an unnamed first-person narrator in Edgar Allan Poe’s “The Tell-Tale Heart” contributes to many purposes. Throughout this story, one may notice that the narrator is a little off, and seems to have a type of disorder. Right off the bat the narrator admits he is “dreadfully nervous” and has a disease. One can conclude he suffers from paranoia or something similar. Instead of coming out telling the story that he murdered a man of no real reason, he begins by telling the crime from a first-person point of view.

The first-person standpoint from which the “Tell-Tale Heart” is told provides the reader with a factual awareness as to of why the main character murdered the old man, and the details about it. In the first sentence the narrator says that he “had been and am” nervous, which could mean that he was not in the right frame of mind. Nobody stood in the way of the main character murdering the old man.

He explains that the old man is loved, then later speaks, “many a night, just at midnight…it has welled up from my own bosom.” This reason could be the reason the crime rests in the disturbed mind of the narrator.

The main character’s purpose is to be detailed to try to convince the reader of his sanity. The narrator tells the story very calmly, like it wasn’t a big deal. He says the story with no remorse, thinking it would make him sound sane, but in fact it does the opposite.

The narrator claims his sanity throughout the whole story which gets the reader to believe he is crazy, not normal. The narrator states, “If you think me mad, you will not longer when I describe the wise precautions I took for the concealment of the body.” The fact that the narrator goes in to detail about how he dismembers the body like it is not a big deal creates an awareness for the readers. The narration of the story tells the crime itself.

At one point in the story, the main character examines the body of the dead old man, the old man that he murdered. He convinces the readers that the body is “stone dead.” Although the body is “stone dead” it is said that the main character believe he can later hear the heart beat. Poe’s use of an unnamed first-person narrator creates a mysterious blank throughout the poem. It adds to the creepiness of the poem. The murderer’s plan unfolds when the police come into the old man’s house after a neighbor hears a scream of the victim. Ironically, instead of the murderer focusing on the scream, he is worried about the heart. He believes that the beating heart can’t be heard through walls. As the murderer takes the police through the house, his behavior is very strange. The strange behavior raises suspicion for the police. Once again, the murderer is claiming his sanity throughout the whole story. The first-person narrative is told from a viewpoint of a person who is not all there. Because the poem is told from this perspective, it allows to reader’s imagination to go wild and focus on some points being overworked.

Also this point of view stresses what the narrator sees, so that the reader can see it as well. All the details, the setting, the feelings and everything is overlooked only to see what the narrator sees. I wonder if the readers found at points in the story, the narrator tries to chance the point of view. He shifts from first-person, to second-person, and then back to first-person. He says “You should have seen me,” or, “Oh, you would have laughed to see how cunningly I thrust it in” to the old man’s room. After reading this poem, the reader really gets to understand how sick and demented the narrator really is. It is very disturbing knowing that the murderer has to write in first-person to claim his sanity, yet ironically he proves himself as an insane man who murdered an old man for no real reason, other than the fact that his eye was crazy.

During the night of the crime, the narrator explains that he approaches the old man’s bed and knows what the victim “had been saying to himself.” This contradicts the first-person narrative. Also the narrator believes he can see into the minds of the officers. How could this happen if the narrator is not the murderer? The narrator should not know how the murderer feels unless he in in fact the murderer. In one of the last paragraphs it states, “Yet the officers heard not… Was it possible they heard not? Almighty God——No, No!” Yet again, in this case the first-person narration can not be supported. The narrator is slowly blowing his cover by interrogating himself.

Towards the end, the narrator claims to have a sharp comprehension of hearing. The narrator bring to our attention his ability to “hear” the beating heart of the old man. Yet at the beginning it was said the body was “stone dead”. How can we “hear” what the narrator hears if this is told in first person? Although it is brought to our attention that we can get inside the murderer’s head and know what he is feeling, no dialog is mentioned in “The Tell-Tale Heart”.

Many points throughout this poem the narrator slowly reveals his part in the crime. By using visual imagery and repeating phrases creates an insight for the readers by repeating, “cautiously, oh, so cautiously,” “a very, very little crevice,” and “how stealthily, stealthily.”

To make a long story short, the use of an unnamed, unstable, first-person narrator in “The Tell-Tale Heart” achieves a few main points.. In particular, this point of view allows the reader to understand why it was told in this manner. It was told in this manner because the murderer is trying to claim his sanity in the beginning by staying calm and collected, yet towards the end it is apparent that the narrator was actually the murderer and is very very deranged. It gets us to understand the motive behind the murder. Most importantly, using first-person perspective in “The Tell-Tale Heart” enhances the dramatic parts to get the reader to see what the narrator sees, and to hear and feel what the narrator does as well. Switching from first-person to third-person creates a sense of awe because while reading this poem, we are said to believe that the narrator had no part in this crime. But towards the end we then realize that the narrator is crazy and unstable, and he committed this crime. As stated earlier, it creates a dramatic impression. 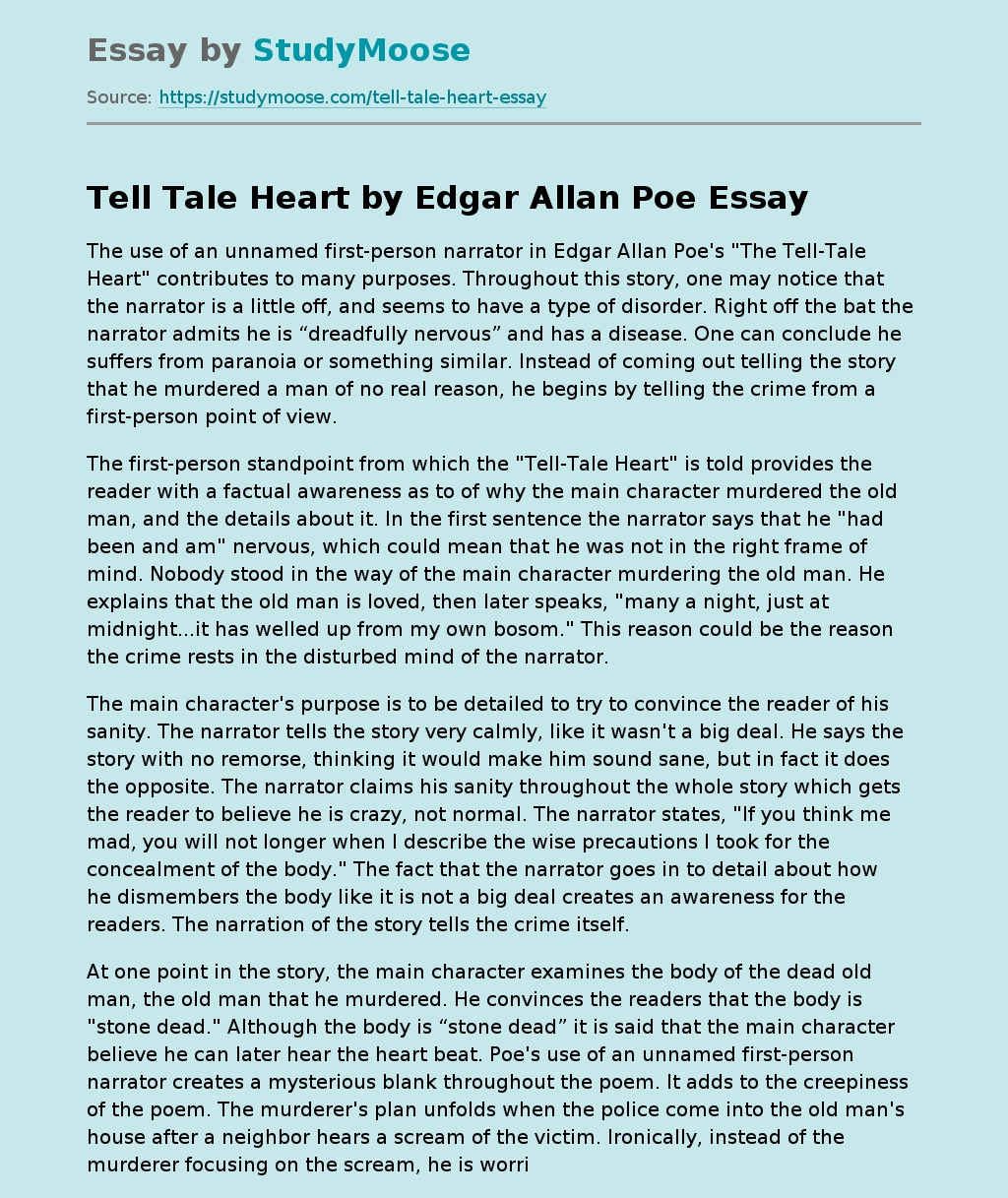