It will be a surprise to hear that there is a Pinoy who is not aware of what teleserye is. Surely, the Filipinos who have lived in the year 1990’s would definitely remember the terrible fate of Judy Anne Santos in the hands of Gladys Reyes in their roles as Mara and Clara. Almost everyone is aware on how Yna Macaspac and Angelo Buenavista fought for their tragic relationship despite the interference of Amor Powers and Claudia Buenavista.

Don't use plagiarized sources.
Get Your Custom Essay on Teleserye: The Emerging Popular Culture of Filipinos Just from $13,9/Page

The 90’s kids would be able to differentiate who Marina, Dugong, and Lorelay are. And certainly, someone would remember how Anne Curtis uttered the words, “Yes!

I’m a slut. But I’m the best slut in town. ” These are just some of the manifestations on the great impact of teleserye’s in the lives of the Filipinos. The Filipinos have been introduced to soap operas more than 60 years but it is only in the year 2000 that the word teleserye was coined, with the combination of the prefix “tele” referring to television, and “serye” pertaining to the Filipino term for series.

And now, teleserye can already be considered as an emerging popular culture of the Pinoys, not only situated in the Philippines, but also for some of those in the diasporas.

The term “Pop Culture” originated in the 19th century, or even before, that denotes the culture of the lower classes which is very different from that of the high classes until the term evolved referring to the trending culture of the mass. To have a concrete meaning, pop culture or popular culture is defined as aspects of culture, whether ideological, social, or material, which are widely spread and believed in and/or consumed by significant numbers of people (Hinds & Harold, 1990). Therefore, we can infer that the main characteristic of pop culture is mass support.

As Leslie Fiedler defines it, “Pop culture is simply Majority’s Culture. ” Secondly, Browne (1984) figuratively described pop culture as “the everyday world around us… [it] is the voice of the people. ” This connotation implies that pop culture came into existence as an expression by the mass. Another meaning suggests that pop culture is a commercial culture, mass produced for mass consumption by the mass media (Goncalves, 2008). These definitions of the popular culture coincide with the effect of teleserye in today’s era. Firstly, as mentioned earlier, teleserye’s have been in existence for more than 60 years.

And even before televisions came into the common household, when it was only radio that was the source of entertainment, Filipinos are already addicted to series that were aired. It was ABS-CBN who produced the very first “soap opera. ” The term was invented because soap products were the common sponsors of these segments. Ever since, these stories have caught the attention of the mass. According to Professor Abad, PhD of Ateneo, Filipinos are a “story telling race” even at the primitive era and that is the reason why many are into watching these TV soaps (Cheche Lazaro Presents, 2013).

It was during “primetime” that these teleserye’s are commonly aired. After a long day of work, Filipinos would eagerly come home to rest and to watch these fictional stories and waiting for the next turn of events. The timing of these teleserye’s was really strategic and the genres were very traditional. These teleserye’s have become the simple joy for many Filipinos and, truly, it has been part of their everyday lives. Traditionally, Pinoys are very emotional.

Even on a recent study in the United States, Filipinos came out to be the most emotional people in the world (ABS-CBN News, 2012). That may be the reason why they got “hooked” to so many teleserye featuring heavy drama with slapping of the face of a poor girl, near-insanity vain women with a broken heart, martyr wives with sadistic husbands, and lovers with a lot of challenges. And it is in fact evident that Filipinos are fond of pitying someone like Flor de Luna, Mara, and Via and more importantly, they like to hate someone intensely like Clara, Amor Powers, Selina and even Margaux.

These are the traditional elements and conflicts of many teleserye that Filipinos were used to. In the same manner, these may also be the reason why the mass is patronizing this kind of entertainment. History speaks of the abuse of the Filipinos from the hands of foreign and abusive nations. Pinoys were always the kawawa. And now, teleseryes reinvent that history as a voice and expression – their pity on the bida who represents their selves and their hatred for the contrabida who brought back to life the oppressors of our country.

Last of all, these teleseryes are being produced by the three main television companies in the Philippines namely, ABS-CBN, GMA Network, and TV5. These three oligarchs of the telecommunication industry compete with each other for ratings. And almost daily, teleseryes are topping the list of the highest rating shows of these networks (Pep, 2013). Even the international channels of these local companies air the very same teleseryes shown in the Philippines confirming the patronage of Filipino migrants to the same soap operas.

A week or so before a serye end, surely, commercials of an upcoming teleserye will be aired. This verifies the compromising supply to the high demand for this type of entertainment. Teleserye accurately suits the meaning of pop culture as a commercial culture mass-produced for mass consumption by the mass media. As a developing nation, the Philippines is home to a very dynamic culture. From speech to practices and from clothing to music, it is visible that the Filipino culture is at constant change.

An addition to our rich culture is our teleseryes that speaks of the emotional side of the Pinoys all over the world. For 60 years, teleserye has never ceased to quench the thirst of Filipinos for drama. Significantly, these series has been an important part to the lives of the Filipinos in terms of their leisure time. It is clear that this pop culture will have a special place in the hearts of the Filipinos, and without doubt, there will be more stories aside from Flor de Luna, Mara Clara, Esperanza, Marina, Pangako Sa’yo and Be Careful with My Heart that Filipinos will keep an eye on. 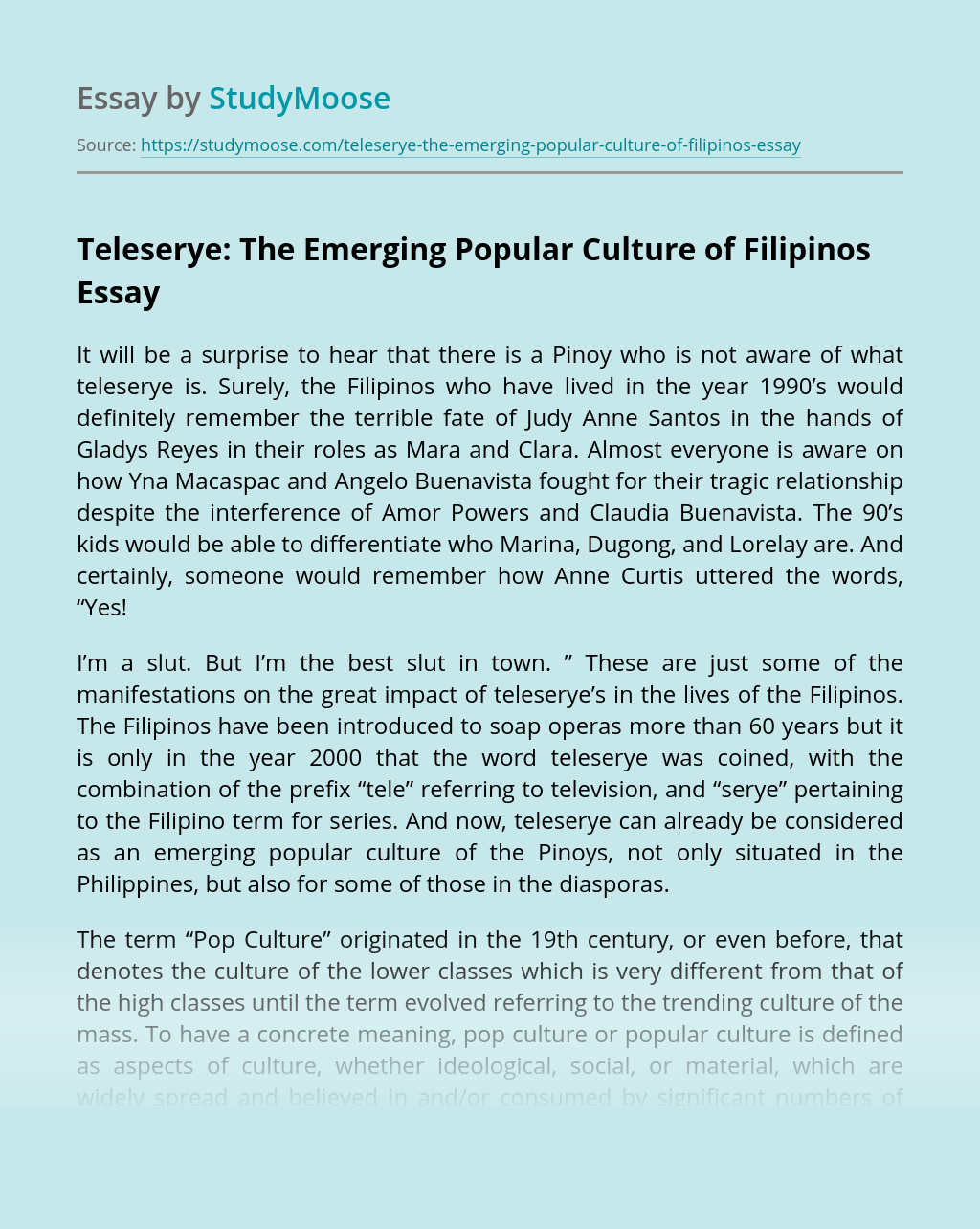