“Teenage pregnancy is defined as a teenage girl, usually within the ages of 13-19, becoming pregnant” (Fact Sheet). The term in everyday speech usually refers to girls who have not reached legal adulthood, which varies across the world, who become pregnant. Teen pregnancy is less often planned and hence less regulated by contraception. Even though teen pregnancy rates have declined over the past few decades, the fact of the matter is that the United States happens to have the highest teen pregnancy rate in the Western part of the world.

Don't use plagiarized sources. Get your custom essay on
“ Teen Pregnancy 13-19 ”
Get custom paper
NEW! smart matching with writer

Teenage childbearing from the ages of 15-19, “emerged from social invisibility during the 1950s and early 1960s, when the rate of childbearing among teens reached historical peaks” (Teenage Childbearing as a Social Problem, pg.

13). “Huge number of teens entering the population created by the baby boom first began to be noticed in the 1960s” (Teenage Childbearing as a Social Problem). What initially caught the attention of the public was fewer teenagers married and had fewer martial births to offset the growing number of births to single women. “As part of the teenage development stage, many teenagers become curious about the rapid changes in their body, and the strange passion of emotional feelings and attraction for the opposite sex.

It is during this period, that teenagers, if see in movies or in magazines, resulting in teenage pregnancy” (Cocorioko).

When it comes to teenage pregnancy, I think society is held most responsible for teenage pregnancies. “In 2008, there were approximately 746,500 teen pregnancies involving young women and girls under age 20… Among the different groups, in 2008 the pregnancy rate per thousand for young women age 15-19 was: 43.3 for non-Hispanic white teens, 106.6 for Hispanic teens (of any race), 117.0 for black teens” (Teen Pregnancy Rate and Teen Abortion Rate in the United States, para. 4). Since the 1960s our rates of teenage pregnancy has gone down in a sense but there is still an overwhelming number of teenage pregnancies happening weekly. “Even though births to teens aged 15 to 17 have declined, a quarter of teen births occur in this age group — nearly 1,700 a week, according to the U.S. Centers for Disease Control and Prevention” (U.S. News). As the U.S. News noted, we can’t stop caring even though the rates have gone down, people still need to make more process in reducing health disparities; being teenage pregnancy. Over time, teen pregnancy rates have slowly gone down but are still at a very high rate to where society and children need to be educated upon the situation of what can happen if you have sex.

Society plays a big role on how teenagers pursue their lives on a daily basis. From what they wear, how their make is, how to act “cool”, and it also has a major role on Teenage Pregnancy. As the MTV show 16 and Pregnant and Teen Mom, advocate that teenage pregnancy is okay for someone to do. “The results of our analysis indicate that exposure to ’16 and Pregnant’ was high and that it had an influence on teens’ thinking regarding birth control and abortion,” (Study: MTV’s ’16 and Pregnant’). I chose this quote because MTV ’16 and Pregnant’ allows teens to think that if they happen to get pregnant that it is expectable to get an abortion. I believe that when someone get pregnant and chooses the root of abortion is considered still pregnant, and is considered killing an innocent child.

Along side with society, our parents can play a major role as well when it comes to teenage pregnancy. When parents choose to neglect their children, and show no interest in them as parents, it can make a teenager feel like an outsider and chooses to have a kid so she has someone to love. “The quality of parents’ relationships with their teenagers can make a real difference in the decisions that their children make about sex,” (Parental Influence and Teen Pregnancy). I chose this quote because I thought it emphasized on how much parents play a major role their children’s life. Having a good relationship with their children is a must! “Overall closeness between parents and their children, shared activities, parental presence in the home, and parental caring, support, and concern are all associated with a reduced risk of early sex and teen pregnancy,” Parental Influence and Teen Pregnancy).

Sexual education can also have an influence on teenage pregnancy. When teens go off to high school, they are surrounded by peer pressure and curiosity with the other sex. “Third, to panicky parents, worried about their ability to protect their children from AIDS and other STDs, comprehensive sex education offers a reassuring message: The schools will teach your children how to protect themselves,” (The Failure of Sex Education). Having sex education will teach the children everything the parents leave out when they try and talk to their kids about sex. Without sex education, we are allowing more curiosity to run through teenager’s heads.

While teen pregnancy is often a result of irresponsibility, there are some slight advantages of bearing a child at a young age. These advantages include a healthier mother and higher likelihood of a safe birth, more energy to raise the child, and it makes an example of the mother so others will not make the same mistake. From a biological standpoint once a woman hits puberty she has reached an age of sexual maturity and therefore is ready to bear a child. Teen pregnancy can also result in mothers much more fit to keep up with a young child’s high energy levels due to their own youthfulness. Perhaps one of the greatest birth controls of all time is seeing another teen with a baby and we live in a world where it is sometimes necessary to see someone else make a mistake to realize how wrong it is. In the case of teen pregnancy what better way to show teens how their irresponsibility could hurt them then by showing them other teen parents. While these are fairly solid reasons, they simply do not outweigh the bad.

Society is not ignoring teenage pregnancy but society isn’t making it a high enough priority in the world. The groups of people that will continue to suffer from this only going problem if we do not find solutions are teenage girls from the ages of 15-19. Many things have been done about the problem, but from research a lot of solutions tend to fall through and end up not helping the problem. When the show on MTV, 16 and Pregnant first aired, the intentions of the show were to show teenagers that there are ways to protect you from getting pregnant. They wanted to show the viewers of the show the consequences from getting pregnant at a young age. The show did not do a good job to portray that, instead it showed teens that their parents would be there in support and pay for the baby supplies. Another solution that fell through was providing sex education in all of the schools.

This feel through, primary because of how much money it was costing to provide teachers, classrooms, and the books or supplies that were to be used for the sex ed. classes. The government isn’t able to provide extra money for teachers to teach sex ed. in classes in the United States. Teenage pregnancy is a major problem in the United States and it needs to be more prioritized by everyone so that we as a country can work on the problem and lower the rate of teenage pregnancy. 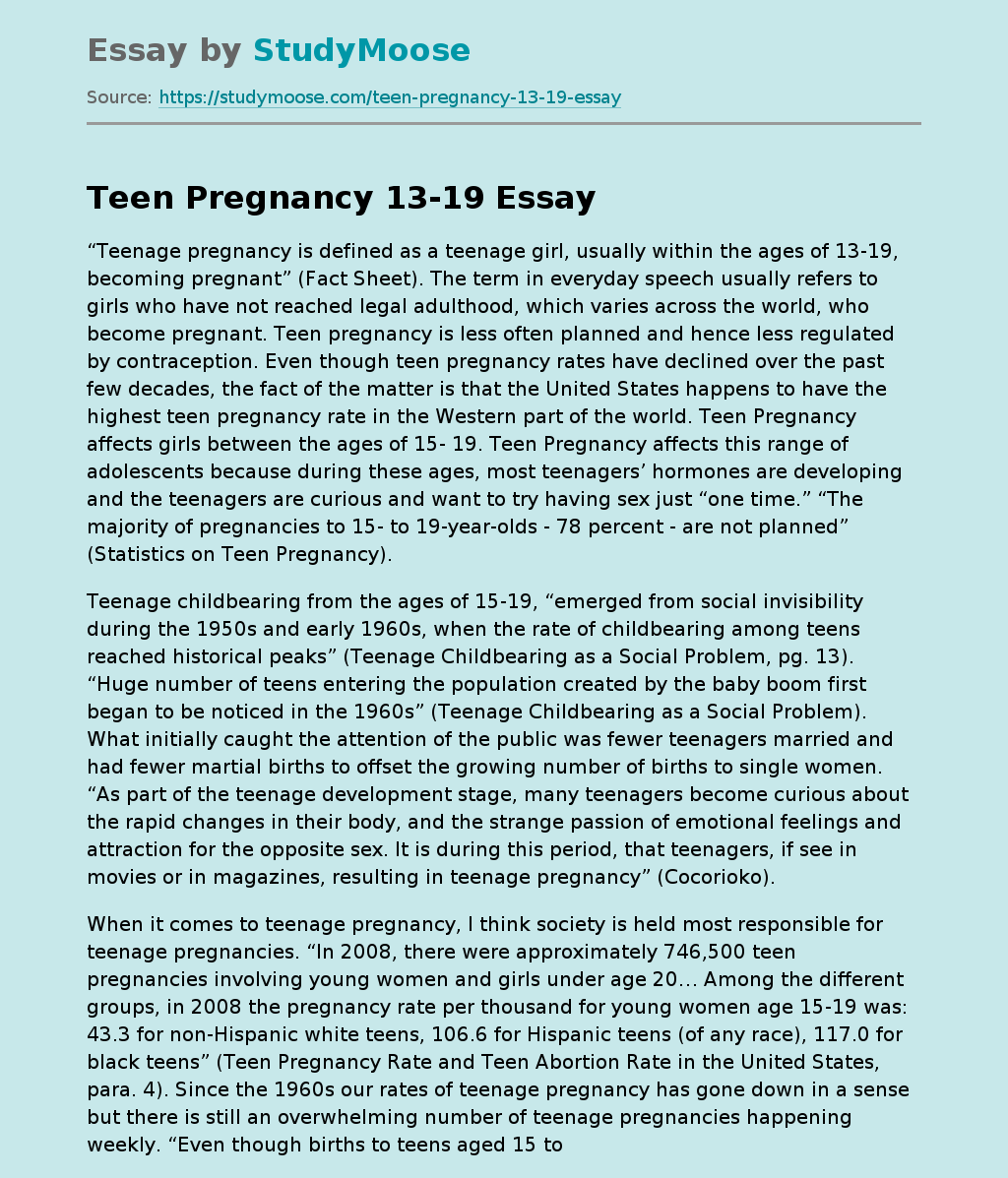