Teens everywhere think about drinking, but they usually don’t think about the consequences. In fact, one out of 10 children ages 12 and 13 uses alcohol at least once a month. In a single year, 522 children under age 14 were arrested for driving while intoxicated, (113 of them were under 10 years old). 70 percent of all teenagers drink alcohol. 60 percent of all teen deaths in car accidents are alcohol-related. To most people, these numbers are just statistics. And most teens never think of themselves as a statistic.

It’s easier to picture other people as one, so what would happen if your best-friend tried drinking for the first time, and decided to drive home because she thought she was sober “enough”?

You probably wouldn’t see her much, because her chance of making it home safe are smaller than her chances of getting arrested for a DUI, her parents finding her in a hang-over, or her getting in an accident and killing herself. Or, imagine your little sibling is being taken home by his or her friend’s mom after a fun play-date, and there is a raging party right down the street.

Bam. Your little sister or brother just became one of the 16,000 people a year that die from a drunk-driving incident. It’s not just a statistic anymore, it’s personal. These are the kind of questions that teens should be asked, to get them thinking about the repercussions about drinking then driving.

First of all, a teenager, shouldn’t be anywhere near alcohol; especially if they’re a driver.

After reading the first paragraph most teens would think, “I’m only a teenager. What am I supposed to do to?” Teens are supposed to make sure that they are not the one who is putting others in danger, it’s the only thing they alone can surely, and effectively do. And what does that mean? It means no drinking at all, not even a beer. It’s just not worth it! Going to parties isn’t bad. There are teenagers out there that go to parties, and don’t drink, and have a great time!

Teenagers afraid of being judged need to hang out with those kinds of people, and they won’t feel the need, or pressure to drink. Of course, a party without alcohol is the safest party, even if they themselves know they’re not drinking. If others are, the sober one is still in danger. There needs to be more teens that would be the one in their group of friends to say, “Hey, that party just looks like bad news, lets go to the movies instead!” They might get shot down, and they might not be as “cool” anymore, but it’s much better than their mother having to look at an empty bed everyday after their bad accident coming home from the party. Teens need to put their life in perspective, and set their priorities straight.

Too many lives have been lost due to alcohol. Schools need to address the problem more forcefully and frequently. Frankly, I don’t believe that one week a year is enough to teach kids about the dangers of drinking underage, and driving under the influence. The problem is partially due to the fact that in almost every school, elementary through high school, that on week is the same week, every year! Red Ribbon week is great, however there needs to be more. The school board is worrying too much about the money and not enough about the children’s well-fare.

If a little extra money gets put towards a campaign to stop teen drinking, instead of that money going to re-paint the railings in the whole school, then that would make a massive difference. Little things can make a big difference if adults get involved and look at what really matters. Teens don’t want to listen, so it seems nearly futile to lecture them, especially when they are being told what is and isn’t good for them. That’s why more drastic measures need to take place more often, as a wake up call. Visuals, real-life stories, and fundraisers need to be utilized in order to save lives.

As a final point, there is not enough being done to make those percentages go down. Every life is precious, and valuable, therefore we should do everything we can to make sure it is sustained. Those statistics can only rise if nothing is done, so it is critical that action takes place now. 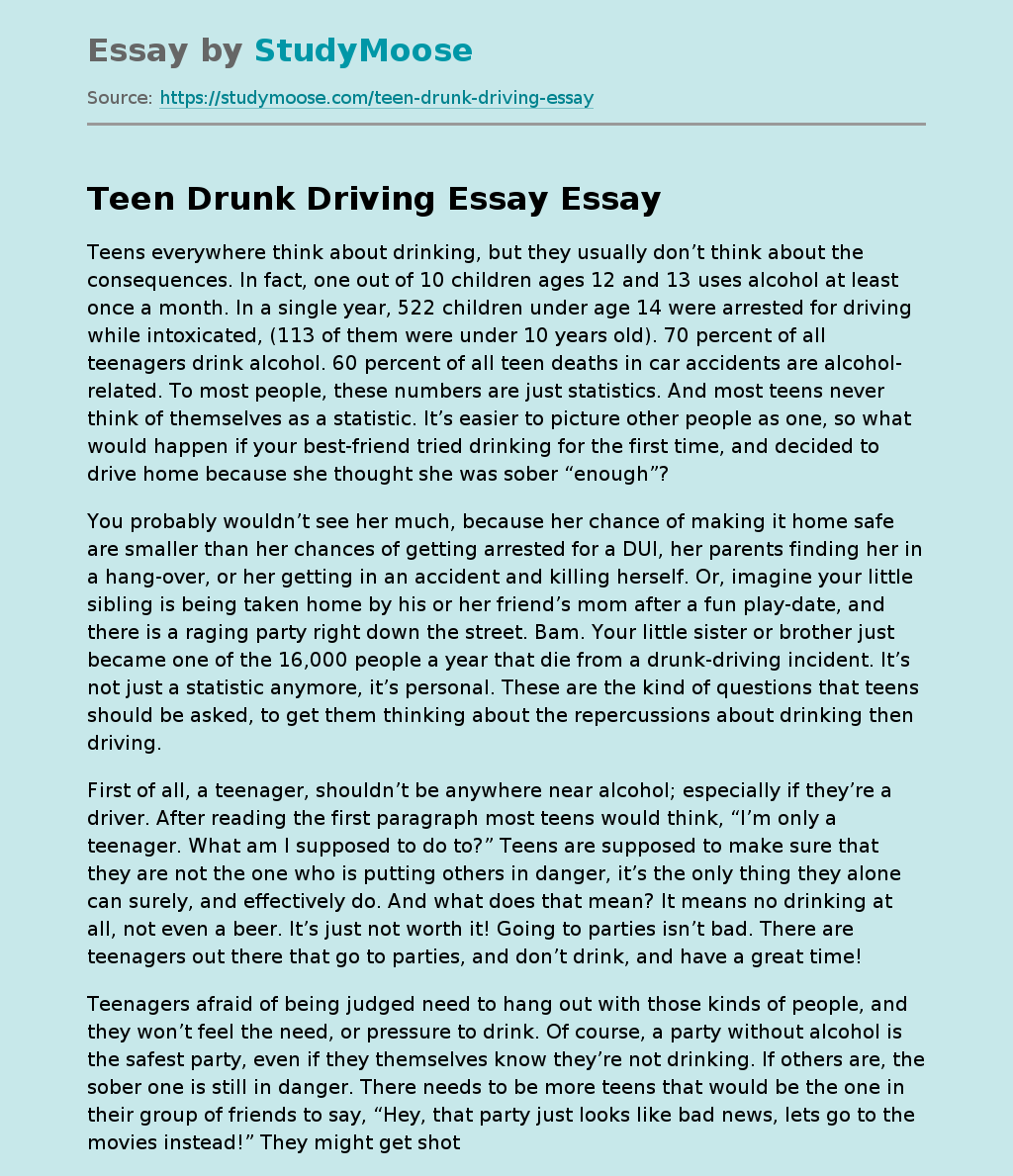