Technology is the process of adjusting systems, methods and tools to resolve a certain challenge. However, technology has established itself into a sort of virus that has found its way into our daily lives.

The current world is mostly relying on technology in various ways and its advancement has made many people to be dependent on it. There are those who believe that technology has taken over our daily lives, others think that it only stands to benefit our lives and some do not think of or care about how technology is affecting our lives (Misa et.

Don't use plagiarized sources. Get your custom essay on
“ Technology and social inclusion: Rethinking the digital divide ”
Get custom paper
NEW! smart matching with writer

al, 2003). Technology have shaped our world in different many ways such as through transportation, communication, social media and lifestyle. It has the ability to be the advancement of the current society but at the same time it has the capability to be its downfall and this creates the basis of argument on the topic of technology on how it has influenced our daily lives. To comprehend the concepts about technology, this essay consist the arguments and views on how technology has influenced the current society through internet, communication and social media and influence on teenagers.

Internet is one of the major advancements which have made this world a global village such that one is informed on everything which is happening across the globe. According to Diwi (2007), technology is more of a backbone for humans and not brain thus internet has made written documents and printed textbooks outdated. Internet is a wonderful resource and has currently improved the lives of many people, though it is misused by some people in wicked ways.

It gives us the capability to pay bills, search various things, and buy items which are not accessible at the local store. Teachers and students in all corners of the world are relying on this resource on research essays and papers. Abundant of information is available in the internet and students find it easy to complete their research papers without much struggles. In early days, it took a long period to access the necessary information but currently it only takes some minutes to access the same information due to the mediums on the internet which consist a mass of information. The current society is almost switching from traditional books, pens and papers to completely digital era of electronic books and forwarding papers through emails. If applied for the right purpose, internet has been the most valuable tool in various backgrounds of a person’s life.

Nevertheless, rather than being the significant advancement of technology, internet has completely modified the mentality of human being. It has brought some kind of addiction because many people cannot do anything without relying on it. Basically, internet has made people to become indolent in all fields in term of thinking and in term of doing things (Woodford, 2006). For example, numerous students do not pay attention in class due to distraction of the internet by use of their phones and laptops thus weakening their power of thinking. Moreover, internet has demoralized the society through the access of abusive and naughty information such as phonography videos thus leading to immoral activities.

Another huge advancement of technology in the society is communication and social media. For instance, take the invention of the phone. The phone has transformed the way we communicate with others in the world. Think of it, not long time ago when we were sending letters that would take months for one just to receive but now one is able to call someone in Europe and wait no longer than thirty seconds. In addition, the application of electronic mail is making communication easier across the globe whereby one can communicate with a person who is many miles away. Social networks such as twitter, google+, Facebook, WhatsApp and yahoo have all contributed to the revolution of technological advancement. (Warschauer, 2003) argues that the distribution of ideas and news is very fast because it only takes a few minutes to reach a wider audience.

The current research show that almost 85 percent of the American population own phones. Introduction of smartphones and iPad has led to development of short message service and new texting language thus contaminating the official language. This modification of communicating language has resulted to alteration of the culture in terms of communication and lifestyle.

Young generation is one of the category which has been greatly influenced by technology in various ways. Research has shown that approximately 95 percent of teenagers in America apply technology in their daily activities. This include completion of their homework with the support of internet search, through social networking, downloading music or movies and playing online games. However, Diwi (2007) has stated that technology is taking away the ability of teenagers to think for themselves in ways such as being imaginative and creative. Moreover, technology is demoralizing teenagers through available immoral information in the internet such as phonography. But in contrary, Kumar (2007) suggest that technology is shaping the future of teenagers in many ways. For example, internet provides good youth studies in form of articles and reports which are relevant to their studies as well their homework and assignments. Kumar (2007) adds that technology gives teenagers opportunity to act together with each other and discuss relevant matters concerning their lives.

Generally, the current world has accepted all technologies in one form or another. Everybody in this globe applies technology at the moment in one way or the other. Irrespective of whether technology is taking us over or helping the world radically, either positively or negatively, we require technology in our daily lives. The demand for technology is too much and too necessary for it to ever fade and with constant advancements around each corner it becomes more challenging. We live alongside technology now and whether we control it or it controls us, it originated from us, therefore we should accept any outcome technology bring. 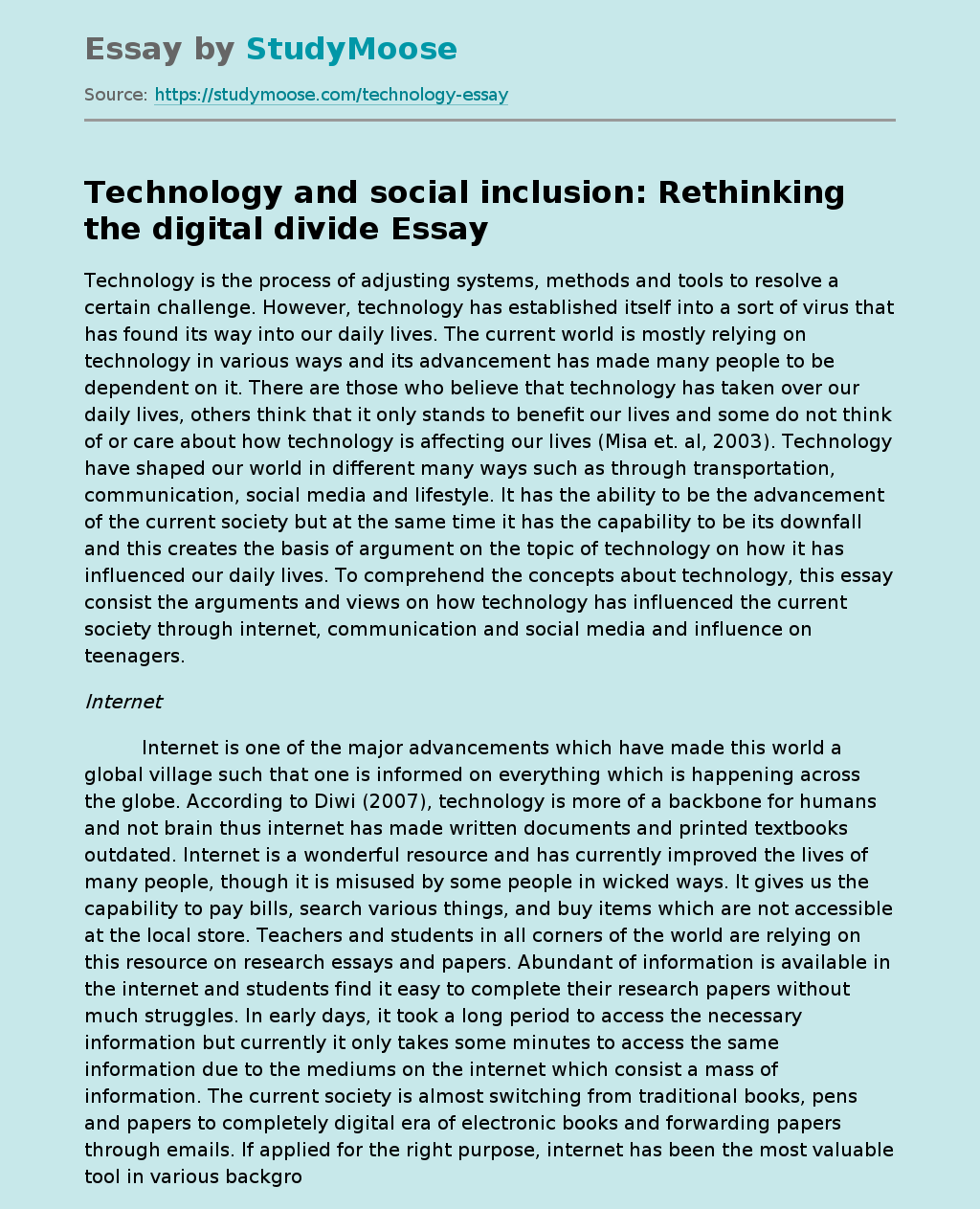