This paper will outline Madeleine Leininger’s prominent theory, its origins, and its purpose. The discipline of transcultural nursing, its distinctive language, ethnonursing research method, and Sunrise Enabler tool will also be explored. These components equipped nurses to provide patients with individualized, appropriate care; this led to improved health outcomes. Finally, the effect of Madeleine Leininger’s contributions to nursing will be examined. Her idea of congruent care was the catalyst for a multitude of federal legislation making culture a requisite, legal consideration and convinced society of the benefits of cultural diversity.

Don't use plagiarized sources. Get your custom essay on
“ Madeleine Leininger: Bridging the Cultural Divide ”
Get custom paper
NEW! smart matching with writer

Madeleine Leininger: Bridging the Cultural Divide through Care The hallmark of a true profession is the ability to demonstrate its unique body of knowledge (Mensik, Martin, Scott, & Horton, 2011).

Madeleine Leininger’s transcultural nursing discipline and its revolutionary companion theory meets this threshold. Counted as “the most significant breakthrough in nursing…in the 20th century,” she forever changed how nurses thought and spoke about healthcare (Leininger, 2002, p. 190). This paper will present a high-level overview of Madeleine Leininger’s contributions to nursing and their influence, as well as reveal the author’s connection to the theorist.

The Theory of Culture Care Diversity and Universality (hereinafter “Culture Care Theory”), Madeleine Leininger’s seminal work, was conceptualized in the mid-1950s and sought to describe, explain, and predict nursing similarities and differences in relation to care and its role in human culture (Leininger, 2001). To provide significant and effective care, the theorist reasonsed, a nurse had to know what various cultures valued about wellness, health, illness, etc.

and use this understanding to guide their nursing tasks (Clarke, McFarland, Andrews & Leininger, 2009).

Inspiration for the Theory

Purpose of the Theory

The theory’s main purpose was to “discover and explain diverse and universal culturally based care factors influencing the health, well-being, illness, or death of individuals or groups” (Leininger, 2002, p. 190). It stressed the use of “research findings to provide culturally congruent, safe, and meaningful care to those of diverse or similar backgrounds” (Leininger, 2002, p. 190). Theory Application Tools. The theorist did not want to espouse platitudes; she wanted her discipline to empower nurses and promote their autonomy (Leininger, 2002). To this end, she outlined thirteen assumptive beliefs to explain the focus of the theory and guide nurses in their practice (Leininger, 2001). Several key beliefs are outlined below:

These assumptions formed the crux of transcultural nursing and what it was intended to do. Leininger also designed three theoretical modalities to guide culturally-based nursing decisions and actions (Leininger, 2001). The first modality, “cultural care preservation and/or maintenance,” referred to generic/folk behaviors and practices that encouraged wellness and did not need to be changed when planning nursing care (Leininger, 2001, p. 41; Literature review, n.d.).

The next modality, “cultural care accomodation and/or negotiation,” involved nursing care activities which help patients of diverse cultures adapt or negotiate professional care activities (Leininger, 2001, p. 41). It encouraged the nurse to integrate generic/folk behaviors and practices when planning care to encourage healthy outcomes (Leininger, 2001). Under this modality, for example, a nurse would allow a patient to hang a healing amulet above their bed in the hospital because they believed in it and it calmed them (Literature review, n.d.). The final modality that nurses could utlize was “culture care repatterning and restructuring” (Leininger, 2001, pp. 41-42).

This modality involved activities which assist with the extensive modification, change, or repattering of a patient’s unhealthy behavior while remaining aligned with their cultural values and beliefs (Literature review, n.d.). This was the most difficult of all the modalities to employ because the nurse must know a great deal about the patient’s culture to have an optimal outcome (Leininger, 2001). As with any plan of care, the nurse had to discuss their choices with the patient and obtain their agreement (Leininger, 2001).

Since the introduction of Florence Nightengale’s Environmental Theory, nursing frameworks had traditionally focused on four metaparadigms: person, environment, health, and nursing (Dayer-Berenson, 2011). However, the Culture Care Theory broke with convention and selected care and culture as its foundational concepts (Leininger, 2001). Leininger found the standard four metaparadigms limited in scope and unsuitable for use in new discipline (Leininger, 2001). For instance, the theorist could not believe nursing’s pundits still refused to acknowledge the indispensible role of care, though they had obviously witnessed its successful impact on health (Leininger, 2001). She also considered the current trend of trying to explain nursing phenomenon with more nursing phenomenon a logical fallacy akin to answering a question with another question (Leininger, 2001).

Further, Leininger pointed out that the Western concept of person would be problematic in transcultural nursing because many cultures focused on the family or an institution, rather than the individual (Leininger, 2001). While Leininger thought environment was important, she opted not to use it as a pillar of her theory because it was not unique to nursing or provocative enough to garner scarce research funding (Leininger, 2001). She discounted the use of health for a similar rationale, citing its commonness and the plethora of existing research (Leininger, 2001). Leininger apsired to enlighten, not emulate (Leininger, 2001).

Other nursing theorists and researchers tried to shoe horn themselves into existing medical models as a means of gaining legitimacy, prestige, and funding (Fawcett, 2002). Leininger, conversely, sought to distinguish her theory from the disease-focused philosophies of the period by not seeking input from other disciplines; it functioned independently (Leininger, 2001). Always seeking to demonstrate the skill and intellect of nurses, Leininger authored a series of definitions to provide clinicians with their own distinct language and, thus, avoid the incongruous use of medical terminology when practicing transcultural nursing (Leininger & McFarland, 2002). Several of the theory’s key explanations are highlighted below:

Influence of the Culture Care Theory

Leininger’s theory generated little interest when it was introduced in the 1950s (Leininger, 2002). Nurses’ practices had begun to shift to include more administration of medication and assistance with complex medical treatments (Leininger, 2001). Additionally, they tried to emulate physicians by wearing stethoscopes, focusing on curative measures, and being very precise in their tasks (Leininger, 2001). Nurses, during this era, were medicine’s faithful “shot givers” (Leininger & McFarland, 2002, p. 76). Needless to say, this mindset was nurtured by physicians, who wanted nurses to remain on the periphery of healthcare, subservient to them (Fawcett, 2002).

Nurses, in Leininger’s opinion, willingly relinquished their power and diminished their professional value by becoming so immersed in physicians’ procedures (Leininger, 2001). With nurses so intent on obtaining medical validation, it was no surprise they found the Culture Care Theory “soft,” “fuzzy,” and “too feminine” (Fawcett, 2002, p. 133; Leininger, 2002, p. 75). The theorist jokingly recalled thinking, “Nurses have no time to learn about care and cultures, as they must keep to medical tasks!” (Fawcett, 2002, p. 113). Patient care was not a priority (Fawcett, 2002).

Its purpose was to systematically guide nurses through seven areas of influence to find relevant cultural knowledge and provide a holistic view during the health assessment process (Leininger & McFarland, 2002). Qualitative Criteria. To further support accurate interpretations and credible research findings, Leininger identified six criteria by which qualitative studies, like those performed with her ethnonursing method, could be evaluated (Leininger & McFarland, 2002). The criteria “credibility, confirmability, meaning-in-context, recurrent patterning, saturation, and transferability” received the endorsement of research experts, which led to qualitative data’s acceptance as valid scientific evidence. (Leininger & McFarland, 2002, p. 88) Dedicated Resources. Leininger also established the Transcultural Nursing Society in 1974 as a forum for intelligent discussion among nurses in the discipline, as well as to aid the dissemination of transcultural information (Clarke, et al.). Finally, Leininger launched the Journal of Transcultural Nursing in 1988 to serve as a dedicated publishing source for transcultural nursing research, ensuring the entire nursing profession also had access to her protegés’ useful findings (Clarke, et al.).

Rise of the Theory

After existing in near obscurity for several decades, the Culture Care Theory was thrust into the spotlight in the mid-1980s (Murphy, 2006). Several factors prompted its emergence from the shadows. First, just as Leininger predicted back in 1950, geographic borders shrank and the U.S. became the adopted country of choice for immigrants from all over the world (Leininger, 2002). The healthcare system became innudated with people clinicians did not understand and could not effectively assist (DeRosa & Kochurka, 2006). Desparate to address patients’ needs in a culturally respectful manner, they discovered Leininger’s blueprint for congruent care (DeRosa & Kochurka, 2006).

The federal mandates of the 1990s further catapulted the Culture Care Theory into prominence (Murphy, 2006). The directives were designed to resolve disparities in healthcare and ensure equitable treatment for those from diverse backgrounds (Maier-Lorentz, 2008). This meant that academic programs, clinical settings, and healthcare agencies now had to promote, incorporate, and enforce Leininger’s ideas of cultural competence (Murphy, 2006).

Impact of the Theory on the Author

The Culture Care Theory, developed organically from one woman’s insightful observations, has left an indellible mark on not only nurisng, but education, medicine, law, social science, religion, and so forth (Leininger, 2002). It would be far easier to name the areas of society that the theory has not impacted, for that would be a much shorter list. Amazingly, the author also owes Madeleine Leininger a tremendous amount of personal gratitude. While conducting research, the author was stunned to learn that Leininger’s theory was the motivation for her academic scholarship. The theorist’s emphasis on congruent care and its positive influence led to the Health Resources and Services Administration’s (HRSA) campaign to significantly increase the number of culturally competent healthcare professionals in critical shortage areas. The NURSE Corps Scholarship Program, which offers a full tuition grant, monthly stipend, and full-time employment to intellectually outstanding nursing students, was founded to accomplish this objective.

Because of the theorist’s tenacity and zeal, this future clinician’s ambition to serve the underrepresented was made a debt-free reality. Leininger passed away in August of last year (Ray, 2012). Ironically, the author was awarded her scholarship during this same month. Janet Jones wrote in Leininger’s obituary guest book entry, “She truly was a visionary and her work will continue to be of great significance to many more generations of nurses” (Madeleine M. Leininger, Ph.D., 2012). The author could not agree more with this statement and, in tribute, intends to contribute to Leininger’s legacy of nursing excellence by maintaining a culturally-informed practice, performing research that offers innovative knowledge to the profession, obtaining an advanced degree, and serving as a staunch advocate for the marginalized. Similar to the theorist, the author also pledges to refuse to accept limitations as to what a nurse can accomplish. The author believes Madeleine Leininger would expect no less. 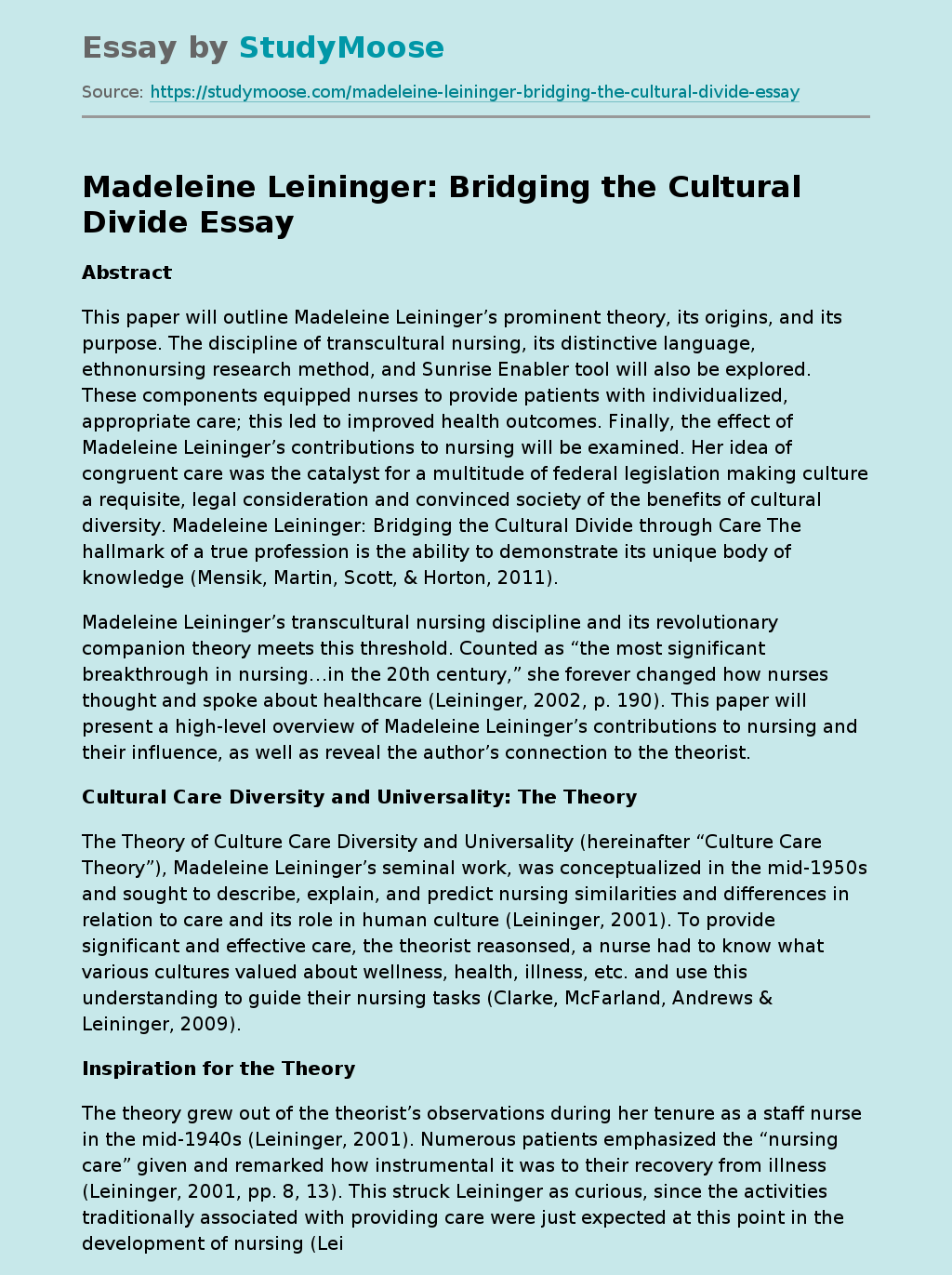