The business is called Decoded a Silicon Roundabout tech company, and it was set up in January 2011 but the workshops started in August that year. Decoded launched its first session of Code in A Day with two teachers and ten students. It has now taught more than 2,500 executives from companies such as Unilever, WPP, Microsoft and Google, the CEOs of over 450 FTSE 100 companies to creative, strategists, investors and start-ups across a broad range of industries how to code and launch an app, and visualise data.

Don't use plagiarized sources. Get your custom essay on
“ Entrepreneur Profile Assignment ”
Get custom paper
NEW! smart matching with writer

Kathryn, 31, came up with the idea for Decoded when she struggled to hire developers for her previous creative agency, The Scarlett Mark. It has the aim of taking people from zero skills and knowledge through to coding a multi-platform app using HTML, CSS and JavaScript, in a day.

The computer programming workshop they provide seeks to provide an essential introduction to the world of programming. Attendees are supposed to leave with a clear understanding of how products are built for the web.

The company doesn’t really have any competitors because there are not any other businesses that provide the same service that decoded do., which surprisingly most people don’t know how to do.

After meeting creative adman Steve Henry, who became her co-founder, she realised she wasn’t alone. She also founded the company with Richard Peters and Ali Blackwell. Parsons stands out in the tech world as she is a young woman and the other founders are all men, she definitely wants to change how women are thought of, plus many women wouldn’t even want to do her sort of job.

The company was self-funded by her and the three co-founders and the biggest challenge for them was having the confidence to spend their time and money on a business that was untested, the risk paid off as it exceeded all of their expectations. Kathryn already had one successful business under her belt before she set up Decoded. She inherited her entrepreneurial spirit from her parents, who live in Malta and have their own hotel and hospitality business.

She studied French, Japanese, Latin, Mandarin, and finally the classics at Cambridge, she had a brief stint at Condé Nast, worked at WPP’s Ogilvy Group, and then set up her first business. The Scarlett Mark, a digital media company Parsons set up from within her former job at ad agency Ogilvy, now runs itself while she focuses on Decoded. London-based Decoded has expanded its operation to Singapore and New York, and has launched pop-up workshops in Shanghai, Palo Alto, Dublin, Atlanta, Hong Kong, Chicago, Minneapolis, South Africa and more.

They chose to have it first in London because that’s where they were all based; there are also lots of tech start-ups around Old street so it’s been dubbed Silicon Roundabout. The office is a huge open-plan space designed by Italian designer Antonio Citterio of B&B Italia. The company is making such an impression that Parsons has just won the New Generation prize at the Veuve Clicquot Business Woman of the Year awards.

Since setting up the company Kathryn has learned how to code but they also have a team of digital experts who teach on the day courses. You get apply for a job with them by going on the website decoded.co and sending a CV and cover letter by email to them, and if they are successful they would be picked to go for an interview. Decoded are looking for teachers to teach the courses, sales people who can spread the word around, and developers to join their software development team, they also let people do work experience with them .It’s Parsons role to drive the business; improving the workshops through client feedback, developing new products and meeting potential customers.

The clients tend to be really successful people from companies such as Ogilvy Group, Facebook and the BBC. The company was successful as soon as it was set up this is because she had the right contacts and there was a big gap in the market for this, so people were willingly signing up for her classes, as coding is very much needed in this day and age.

They are planning to launch the Decoded Foundation this year — an educational programme to teach school-teachers from all subjects about coding and how they can incorporate it into their lessons. The new programme, which will be led by Decoded co-founder Alasdair Blackwell, has been designed specifically to train teachers on how to apply coding to their lessons across all subjects including art and geography. Code Ed has taken over a year to develop and will cover all stages of the curriculum, from
primary school through to university level.

The move forms part of its overall mission to help drive tech education. The start-up is now bidding for the mayor of London Boris Johnson’s £1m prize pot for London start-ups which could help fund the foundation’s development. Meanwhile Decoded is also poised to launch a new wave of coding classes including a Future Platforms course designed to teach people how to code for any future device including Google Glass and other forms of wearable technology.

It will also launch a “Cyber Security” course in beta in December with an official launch set for January 2014. The Cyber Security course will touch on major issues including the recent Snowden debacle, and teaching businesses to be aware of their data security.

Technology is getting more and more prominent in businesses, this means there will always be a need for what decoded has to offer. 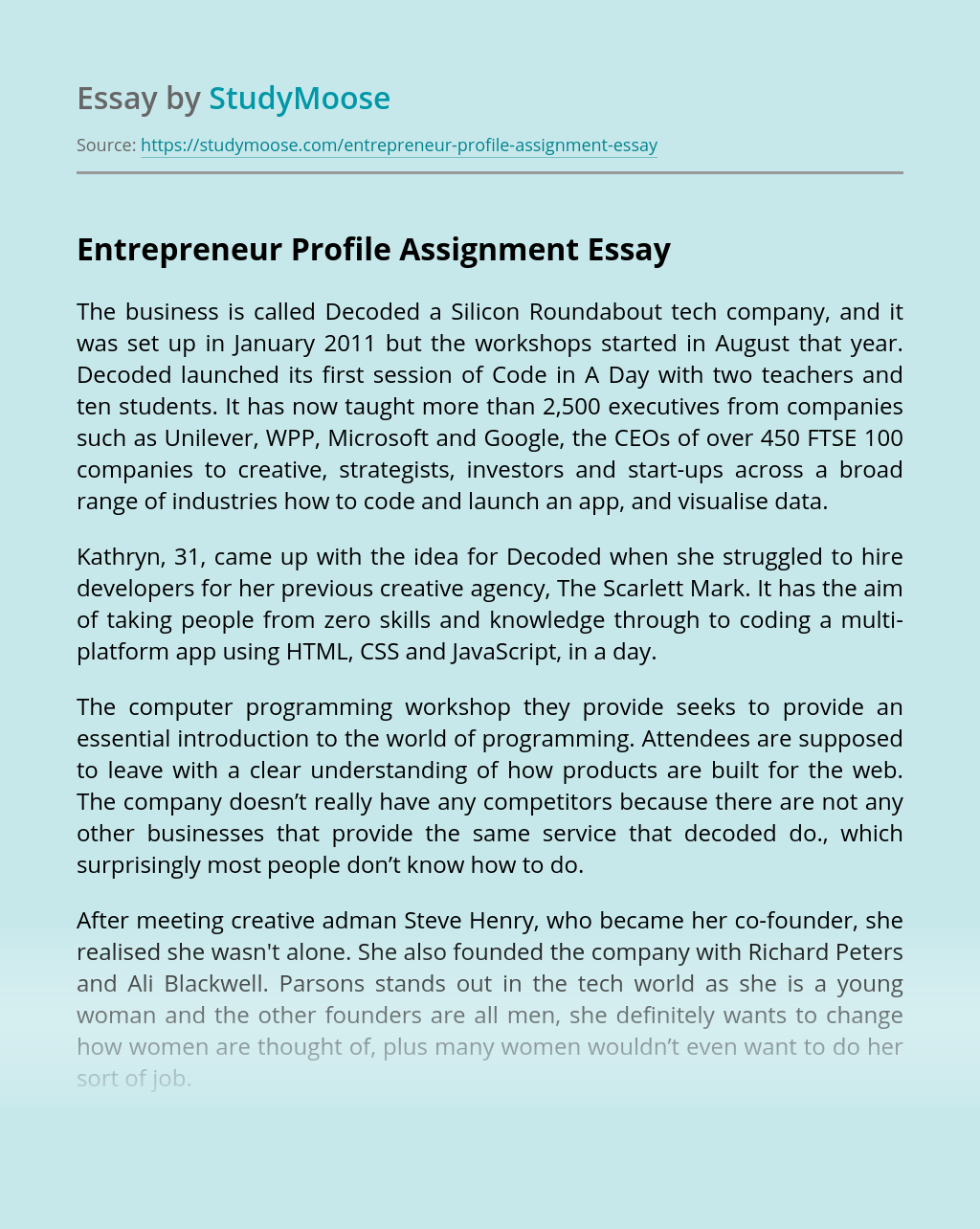