Technological Development in All Possible Areas

A society that once used a basic keypad phone are now using smart phones with the capacity of acting as handheld computers. Electronics is a form of technology that can extend and achieve various tasks in individuals’ day by day life. It has allowed an individual to multitask on the go, but to some it’s become an extension of their body and identity, especially to the children. With the rapid growth of technology and people’s busy lives, everybody is becoming heavily dependent on technology to make their lives simpler.

Don't use plagiarized sources. Get your custom essay on
“ Technological Development in All Possible Areas ”
Get custom paper
NEW! smart matching with writer

Most of today’s parents are using electronic gadgets to occupy their children while they tend to their everyday tasks without being mindful of the effects it has on their children’s development. According to the article, “Children, wired- for better and for worse,” the effect of technology depends on what type of technology is being used, how much of it is being consumed and for how long are we consuming the information (Bavelier, green, Dye, 2012).

Therefore, parents should limit their children’s daily usage of electronics and instead encourage activities that will benefit the child’s development.

As noted, there is nothing wrong with the consumption of technology but that all depends on the type of technology, how much of it is being consumed and the amount of time it’s being used. Before declaring the obvious negative effects on children, let’s not forget that technology enhanced the decision-making and problem-solving region of the brain while improving their basic attentional, motor and visual skills.

Today, many young millennials have technological advancements more than an entire generation that came before them. The usage of electronics in the classrooms is becoming progressively noticeable every year. It has allowed teachers to pass similarly more information in a shorter time than what was traditionally possible. The electronic gadgets have enabled children to attain an abundant amount of knowledge, allowed them to be more independent and also gave them access to educational resources (Alghamdi,2017). For instance, a number of shows like ‘Sesame Street’, ‘Dora the Explorer’ and ‘PAW Patrol’, have been correlated with positive outcomes such as vocabulary sizes, school readiness, numeracy skills, and language skills.

However, not all technology intended for children have positive outcomes. On the contrary noneducational children television shows appears to have a negative effect. According to the article, “Child, wired-for better and for worse,” for a show to be effective “…. early intervention programs need not only engage the young viewer, but they must also elicit direct participation from the child, provide a strong language model, avoid overloading the child with distracting stimulation, and include a well-articulated narrative structure. In addition, effective educational shows also exemplify how to resolve social conflicts and productively manage disagreements and frustration (Bavelier, Dye, Green, 2011). Nonetheless, noneffective shows such as ‘Teletubbies’ that has been linked to reduction in language skills which is shown to lack these fundamental criteria that is crucially needed to shape a child’s development as academic content would.

In addition, not only has children’s television shows become a growing problem but another concern regarding the influence of technology is the potential for it to cause an increase in behavioral aggression and violence amongst children. Regardless whether it is through television or video games, kids are frequently exposed to violent media. Depending on the content of their experiences, children start to create beliefs about social standards and acceptable behaviors. Therefore, any activity that elevates violence is probably going to be a hazard factor for violent behavior as he/she continues into adulthood. Based on the article, “Violence, Media Effects, and Criminology,” over a thousand studies on the effects of TV and film violence throughout the past forty years has shown an increase in aggression, and social anxiety, and negatively view on the world (Phillips,2017). Excessive exposure to violence media has proceed into real-life aggression and violence.

Consequently, the numbers of mass shootings among youngsters has skyrocketed throughout the years. In a world that is overrun by technology, criminologists are now having to study the correlation between media and real-life aggression and violence. On July 22, 2016, an eighteen-year-old shooter killed nine people at a mall in Munich, Germany. While under psychiatric care, they discovered his two obsessions that included mass shootings and video games (phillips,2017). Clearly, media violence can lead to violence in the real world but yet few scholars’ state that the evidence doesn’t support the claim. However, similar mass shooter for instance Nikolas Herald, a seventeen-year-old boy who killed seventeen people inside Marjory Stoneman Douglas High, played violent video games incessantly up to fifteen hours per day. While not all high-profile criminal incidents are associated with violent media content its foolish not to consider it has one of major influence towards those crimes.

In the same way, technology has been beneficial to a child’s development it will also led to a long-lasting negative effect. It has advanced today’s children in a variety of ways yet excessive usage will hinder them tremendously.

Technological Development in All Possible Areas. (2021, Dec 13). Retrieved from https://studymoose.com/technological-development-in-all-possible-areas-essay 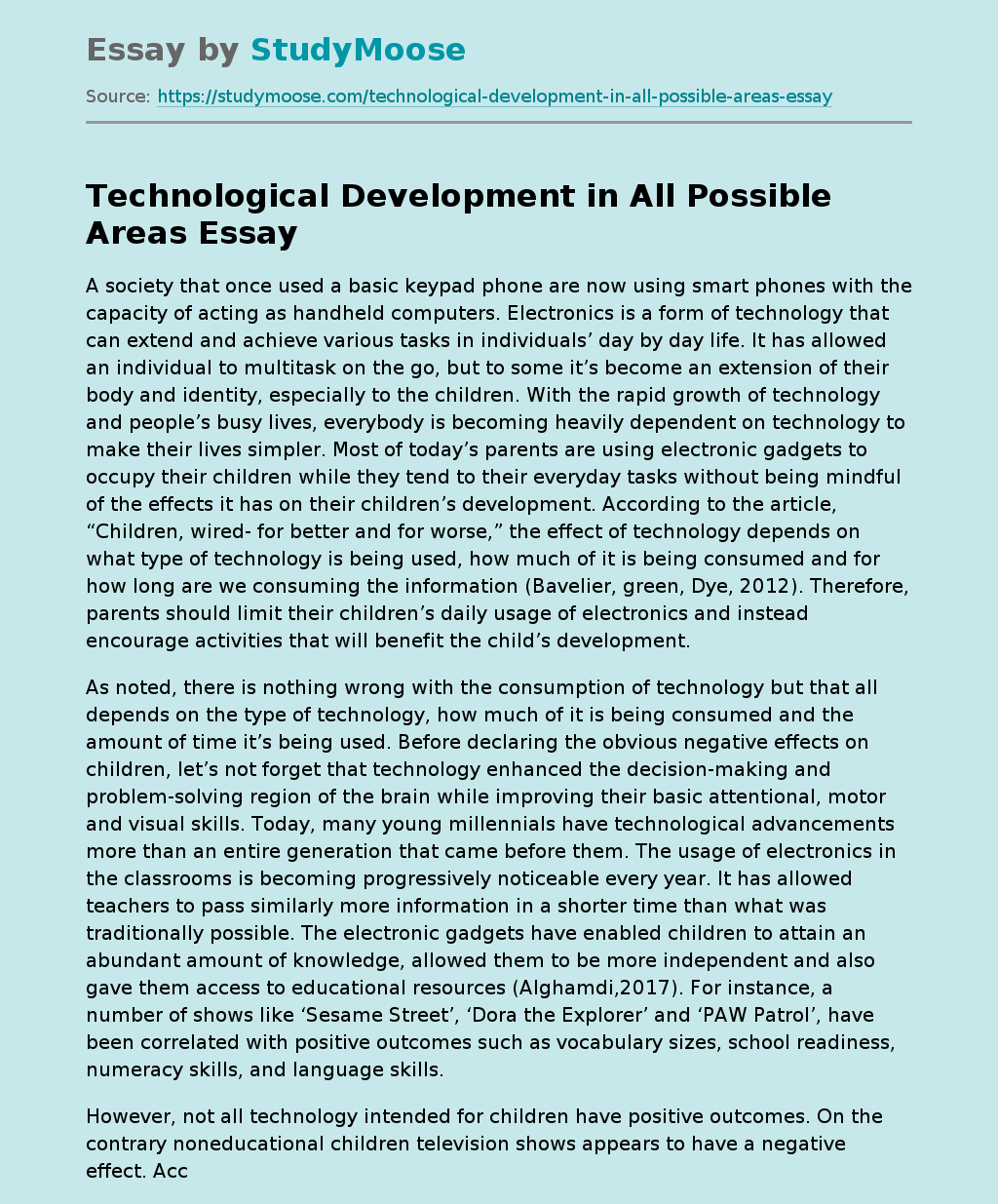