Teaching in Our Day Out by Willie Russell

Our Day out by Willie Russell is an energetic and humorous play, about a school trip to Conwy castle. The ‘progress class’, a class for illiterate children, are on a trip to Wales where the liberal Mrs Kay and the strict Mr Briggs have completely different ideas about the day should be organised. Mrs Kay and Mr Briggs have two distinct personalities that clash frequently throughout the play and Willie Russell presents both in an interesting and comical way in his drama.

Don't use plagiarized sources. Get your custom essay on
“ Teaching in Our Day Out by Willie Russell ”
Get custom paper
NEW! smart matching with writer

Mrs Kay is a benevolent and fun teacher who treats the children as if they were her own. ‘She always reminds me of a mother hen rather than a teacher’. Mr Briggs says this and it sums up exactly what Mrs Kay is like and her attitude to the children. Her aim on the school trip is for everyone to have fun with the only rule being ‘…think of yourselves but also think of others’. She genuinely cares for the children and wants them to have an enjoyable day out to assuage the social injustice that they find themselves up against.

Mr Briggs’ ideology of the children is contrary to Mrs Kay’s. Mr Briggs is a strict, intolerant and old-fashioned teacher who is has firm standards and is harsh towards the students. ‘Stop! Slater, walk…walk! You, boy…come here. Now stop. All of you…stop!’ Mr Briggs is shouting as the children get off the coach but Mrs Kay casually walks past and pours out some coffee.

At the zoo, Mr Briggs lightens up a little and we get to see more of the soft and loving side that he conceals in favour of the harsh and angry one. He is enjoying himself when he explains about all of the different animal types to the children, and in the café with Mrs Kay, he even offers to do a small presentation at school with some slides. ‘I didn’t think the kids who came to you would be too interested in animals’. He is pleasantly surprised with the interest of the children in a topic that he holds close to this heart. However, all the reader’s hopes of Mr Briggs turning ‘nice’ are dashed when the children attempt to steal the animals and he returns with vengeance back to the old Mr Briggs, and, with a ‘face of thunder’, shouts at the children again.

Mrs Kay understands that a lot of the children come from a deprived background and sympathises with their predicament. She shows this when she chooses to go on the side of the Progress Class when they attempt to steal some animals from the zoo. ‘Well I’d suggest that if you want the chaos to stop then you should stop seeing it as chaos…It’s too late for them. Most of them were rejects the day they were born…can’t we try and give them a good day out…’ She realises that it was probably the closest that they would ever get to an animal and many were just over-excited at the prospect of having something that they would never have.

Mr Briggs’ encounter with Carol Chandler is a defining moment of the play because when Carol is on the top of the cliff we can see that Mr Briggs does not know what it is like to be Carol and children like her in that situation. He is taken aback at the fact that Carol talks back at him which he is not use to. Carol doesn’t want to go back to school, she dreams of living in a ‘nice place’ and has really enjoyed the outing. Briggs thinks she is just being stubborn but what has Carol got to go back to in Liverpool? Briggs begins to see that she is a poor, innocent girl whom no one loves. After the incident with Carol, Mr Briggs changes, he sees the world from her perspective.

He becomes more relaxed, insists on a visit to the fair and lets the children treat him like they do Mrs Kay. At the fair he starts to have fun with the children and most are astounded at his attitude change – ‘I didn’t know you was like that, sir. Y’ know, all right for a laugh an’ that’. However, as the coach nears Liverpool, reality returns, and Mr Briggs purposely destroys the photo film, which held evidence of his changed relationship with the Progress Class.

It is plainly evident in the play, that Mr Briggs is the better teacher academically than Mrs Kay. The headmaster asked Mr Briggs to go along on the school trip ‘keep things in some sort of order’ and the headmaster describes Mrs Kay’s attitude to education as ‘one long game’. This epitomises Mrs Kay’s attitude to teaching as something that should be fun, entertaining and not too serious. Mrs Kay may be an incompetent teacher, but the question
that needs to be asked is: Can the Progress Class be educated? Mrs Kay doesn’t seem to think so and is more interested in letting them have an enjoyable childhood than in expanding their knowledge.

‘Teach them? Teach them what? You’ll never teach them because nobody knows what to do with them…they haven’t got anything to aim for…’

I think Willie Russell intends us to sympathise with Mr Briggs and with the children in the Progress Class, especially Carol Chandler. The children are from poor background and have no hope for the future. Carol Chandler’s school uniform ‘doubles as a street outfit and her Sunday best’. This shows just how poor the children are – their best clothes are their school uniform. Carol, who dreams of being in a ‘nice place’, is probably the child worst affected because she has no one to love and no one to love her. She comes from a rough neighbourhood because she says – ‘ That’s why we never have nothing nice round our way – ‘cos we’d just smash it up’. She took the guinea pig and was affectionate towards it because it was something that was her own and something that she could love. Also, the other children seem to ostracise her and the only person she seems to have a proper conversation with is Mrs Kay.

Mr Briggs is an intelligent man trying to educate puerile students. All throughout the play he means well to the children and it is a real stab-in-the heart when Carol says ‘ I know you hate me. I’ve seen you goin’ home in your car, passin’ us on the street. And the way y’ look at us. You hate all the kids!’ When he tells off kids, they take it but after they just ignore him and carry on as normal. He is also the only teacher who doesn’t realise (until after the Carol Chandler incident) that the Progress Class are incapable of being educated.

Our Day Out by Willie Russell is a funny and light-hearted play but with lots of hidden messages. Wille Russell presents the characteristics of Mr Briggs and Mrs Kay very interestingly and with good humour. We are left with a feeling of ambivalence at the end when Mr Briggs destroys the camera film. Has he changed for good or was it just a one off?

Teaching in Our Day Out by Willie Russell. (2016, Jul 15). Retrieved from https://studymoose.com/teaching-in-our-day-out-by-willie-russell-essay 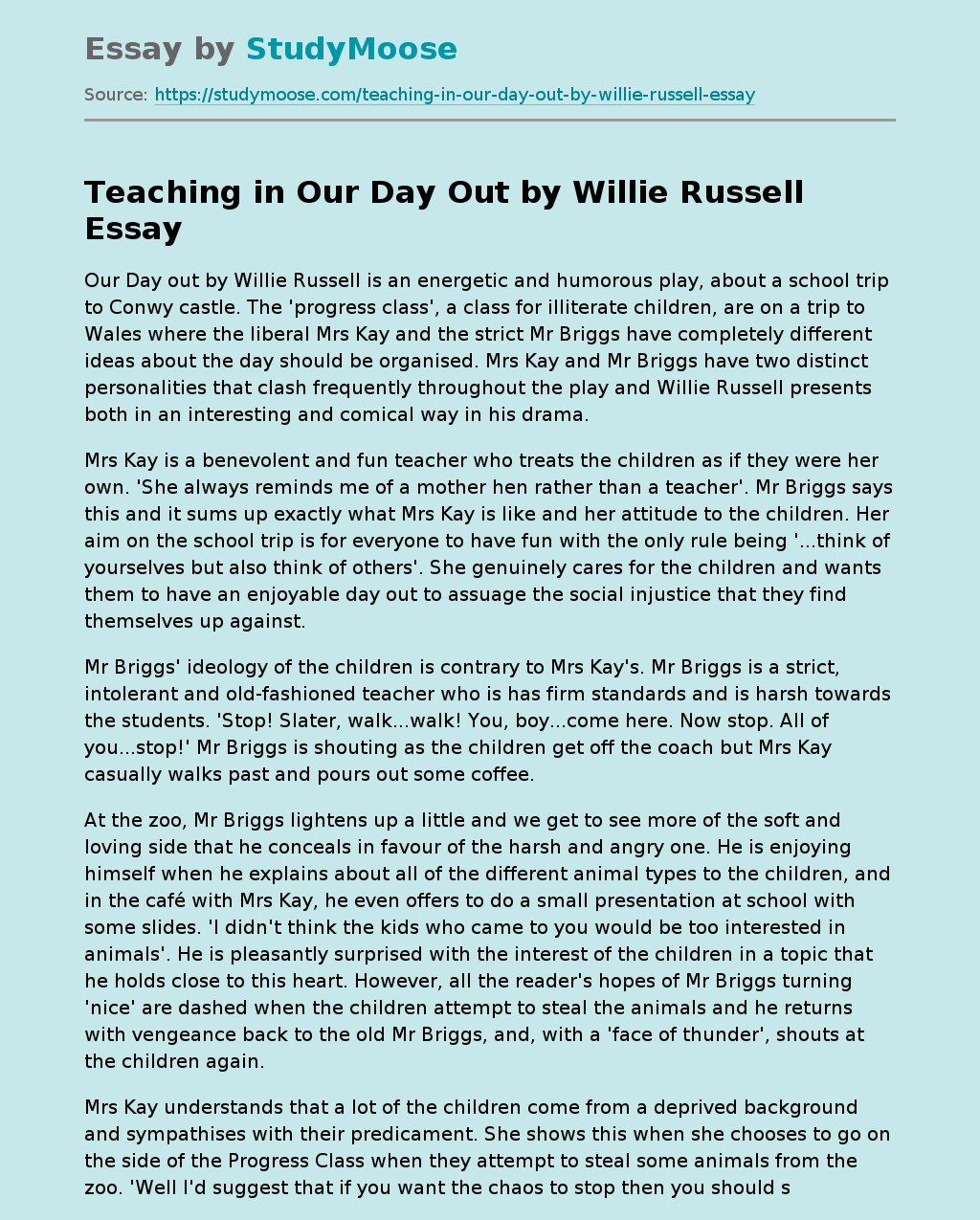