Taking a Stand Against Bullying in Schools

“You are ugly;” “why were you born;” “I feel sorry for your parents;” “you are fat;” “you are stupid;” all of these sayings are harmful and can eventually lead to serious injury or death. The people saying these mean phrases either do not think they hurt, or they do not care that the sayings hurt, but to the ones who have to hear these words it cuts deep to the bone. Most people say that they don’t have any proof that bullying occurs.

Don't use plagiarized sources.
Get Your Custom Essay on Taking a Stand Against Bullying in Schools Just from $13,9/Page

That is not always true because other people know about the bullying. Students see it happening all the time and they never speak. If any cases of bullying are reported or suspected, then the bully should get immediate punishment.

Bullying affects one in every two teenagers in the United States. I myself have not exactly been bullied but I have lost a best friend due to bullying. We were as close of friends as anyone could be.

His girlfriend was a bully. She bullied this girl that really liked him, and he really liked her, but his girlfriend split them up so she could have him to herself. I believe his girlfriend threatened him or something because he eventually would do anything she asked him to do. His girlfriend not only disliked the girl that liked him, but she also did not like me for some unknown reason, therefore she would try to bully me, and she later on bullied him to the point of where he could no longer be friends with me.

She sent me filthy text messages, told me all kinds of mean things, and she made it her goal for him to never talk to me, or be my friend again. The moment I received the text from him saying that he could no longer be my friend because she did not like it; I fell apart. I could not hold back the tears. I tried my hardest to stand up to her, and stop her from bullying people, but nothing I could do seemed to help.

To prevent situations like this from happening, or to help those who have been bullied; the bullies should suffer severe consequences, even on the first time they are caught, or suspected with valid points that they are bullying. I lost my best friend that day, and I am striving to see that no one else will become a victim of bullying or feel the effects of bullying. I thought that I had no one to talk to at that point in my life; I felt so alone and worthless. If I felt those dreadful feelings, I can only imagine how others will or have felt due to the harmful effects of bullying.

President Obama once said, “We’ve got to dispel this myth that bullying is just a normal rite of passage,” and this is very true because bullying is a crime, and should be strictly punished at the first signs of any harassment. Bullying is not a laughing matter because precious lives, relationships, and friendships are lost every day due to bullying. Let us all take a stand today against bullying. If we all do our part to prevent bullying, then imagine how much better every person’s life could be.

Taking a Stand Against Bullying in Schools. (2016, Aug 30). Retrieved from https://studymoose.com/taking-a-stand-against-bullying-in-schools-essay 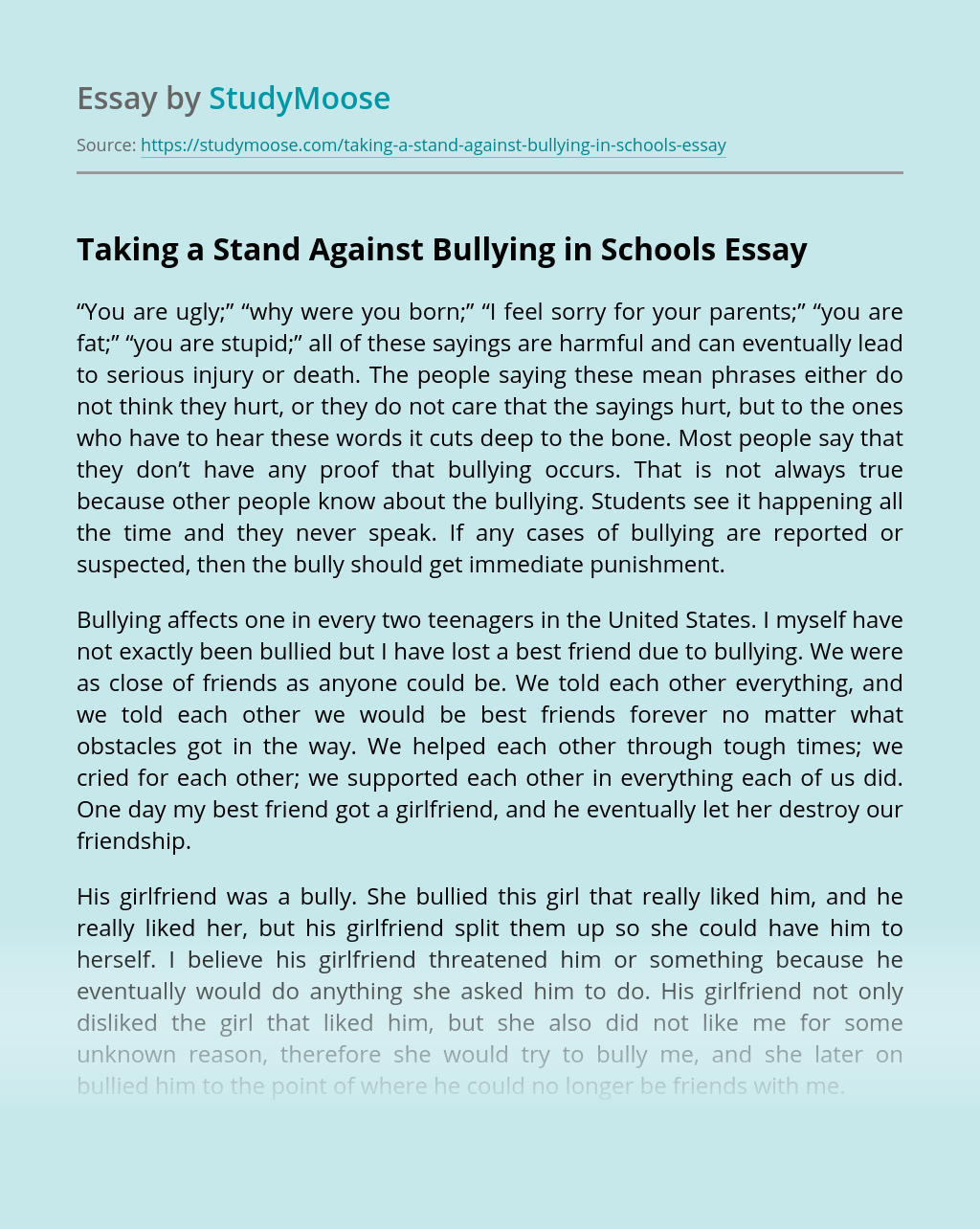 Rate this post “Give me some nude pics or I’ll post the picture of you last night at the party on Facebook ”. This is an example of cyber bullying and nearly 43% of kids have been bullied online, 1 in 4 has had it happened to them more than once. However, you hold the...

Rate this post (1) The pseudonym ‘AFriend” is ironic since the individual by this name is not a friend nevertheless a bully which is sending Avalon messages about what the other women consider her at school. ( 3) Being overwhelmed by the material of the e-mail is quite typical for Avalon generally since it was...

Get Essay
My Bodyguard

Rate this post “The Bodyguard”, launched in 1980, is a sensational movie that deals with the topic of bullying really well. This movie offers us a better look at the life of bullies, and the ones going through the horrible nightmare. It demonstrates how bullies go far for themselves among their peers, and what the...

Montana 1948 and the Abuse of Power

Rate this post In the novel “Montana 1948” you see a common issue that is around still in our everyday lives. This issue is the abuse of power and how it leads to consequences that sometimes might be devastating. You see this in our everyday lives with the Government and also many times in are...