Teenagers around the world face a lot of problems, and today I’d like to talk about bullying and the effects.

Many people retain horrible memories from school, in large part due to the bullying they have experienced. According to statistics, at least 30% of all Americans have been involved in bullying, either as the bully or the victim. Over two thirds of students in America, believe that schools respond poorly, infrequent and ineffective to bullying. But it’s important to keep in mind that there are different kinds of bullying, and different solutions:

Physical bullying is the most obvious form of bullying.

Don't use plagiarized sources. Get your custom essay on
“ Teenage Problems ”
Get custom paper
NEW! smart matching with writer

In this type of bullying, the instigator attempts to physically dominate another person. This usually includes violence and threats, which are designed to instill a fear in the victim, and possibly force him or her to do something.

Verbal bullying is when someone verbally bullies another; he or she uses demeaning language to tear down the victims’ self-image.

Emotional bullying is even more subtle than verbal bullying.

Teenage bullying that includes emotional methods aims at getting someone else to feel isolated, alone and may even prompt depression. This type of bullying is designed to get others to ostracize the person being bullied.

Cyber bullying is becoming a very serious problem for teens. This type of bullying uses instant messaging, cell phone text messages and online social networks to humiliate and embarrass others. This can be especially devastating to the people being bullied, since they cannot even find a safe place in the virtual world.

Additionally, with the internet becoming such a big part of teens’ lives, it’s no surprise that cyber bullying is increasing.

But it’s not just teens bullying teens anymore. Megan Meier hanged herself, three weeks before her 14th birthday in 2006, after receiving cruel messages on myspace. It turned out that the mother of her best friend had made a false account, to see if Megan was loyal to her daughter. The last message Megan got before her suicide, was “the world would be a better place without you”. Physical bullying is more common among boys, where girls often favor verbal and emotional bullying. Additionally, girls are more likely to use exclusion as a bullying technique than boys are. The effects: There are a number of effects that come with teenage bullying. There are the obvious physical injuries, but bullying can deeply affect teens, and can lead to depression, drug use, poor social development and even suicide.

More parents are allowing their kids to undergo plastic surgery, to make the bullying stop. For example, Nadia Ile. A fourteen year old girl, who had been bullied for many years, because of her looks. In some cases, bullied teens have violent fantasies of attacking their tormentors, in order to get revenge. It turns out that 87 percent of school shooters left behind evidence of them being victims of bullying, including Adam Lanza. The guy that shot 26 people, including his mom. The two students involved in the Columbine massacre were described as gifted students, who had been bullied for years. During the shooting, the boys killed 13, injured 24, and then killed themselves. This I why I think bullying is such a big problem. It’s because of these horrible effects.

Each teenager would like to have a peaceful life where there is no need to work to earn some money and just study to find new knowledge. But today, although living in kaleidoscopic Malaysia, teenagers still have problems. Teenagers are teenagers. They cannot handle their problems themselves. They have no backbone to face the problems in their life. So, what are the problems that burden the teenagers?

The main problem that teenagers face today is coming from their home. Even though only some teenagers who are having this problem, it has to be thwarted. Their home is full of stress. Parents are always squabbling about something. Their siblings also make a bicker. This can make teenagers feel so uneasy. Sometimes, they have to face the music from their parents’ action. The uneasy feeling make teenagers unable to focus on their studies. Their results go down badly and they feel moody everyday. So, parents and siblings at home must take action quickly so that this problem can be solved. Then, the teenagers will gain their spirit to be triumphant in their studies.

Furthermore, teenagers have bad attitude that they easily get negative influence from their friends. When they have friends, they might follow their friends’ attitude. If they have a good friend, it would be nice but if they have a bad friend, it would change their attitude to become mischievous teenagers. Although this is a difficult-to-solve problem, we can still keep our fingers crossed and make them turn a new leaf. We should tell teenagers to let the cat out of the bag and solve it properly. It can be used to reduce the problems that burden teenagers lately.

In addition, teenagers today love to do bad things. If we ask them the reason why they like to do those things, some teenagers may reply that they feel ecstatic doing a bad job that disturbs somebody else. Actually, it is just a flimsy excuse. They like to burn their fingers and get into hot water. It does not give any advantage if they still do the bad thing. Usually they are involved in vandalism and gangsterism. They have to prevent themselves from this problem. Rome wasn’t built in one day. They have to try again and again to release themselves from this problem because where there’s a will, there’s a way.

As a result, the problems that burden teenagers can be solved sooner or later. Parents including the community must see eye to eye to lend their hands to the teenagers to solve the problems. The teenagers who are free from problems and stress can focus a hundred percent on their studies. They can have their success in their studies and have a brain wave in their life. Teenagers without problems will build a harmonious family and live in a peaceful life. 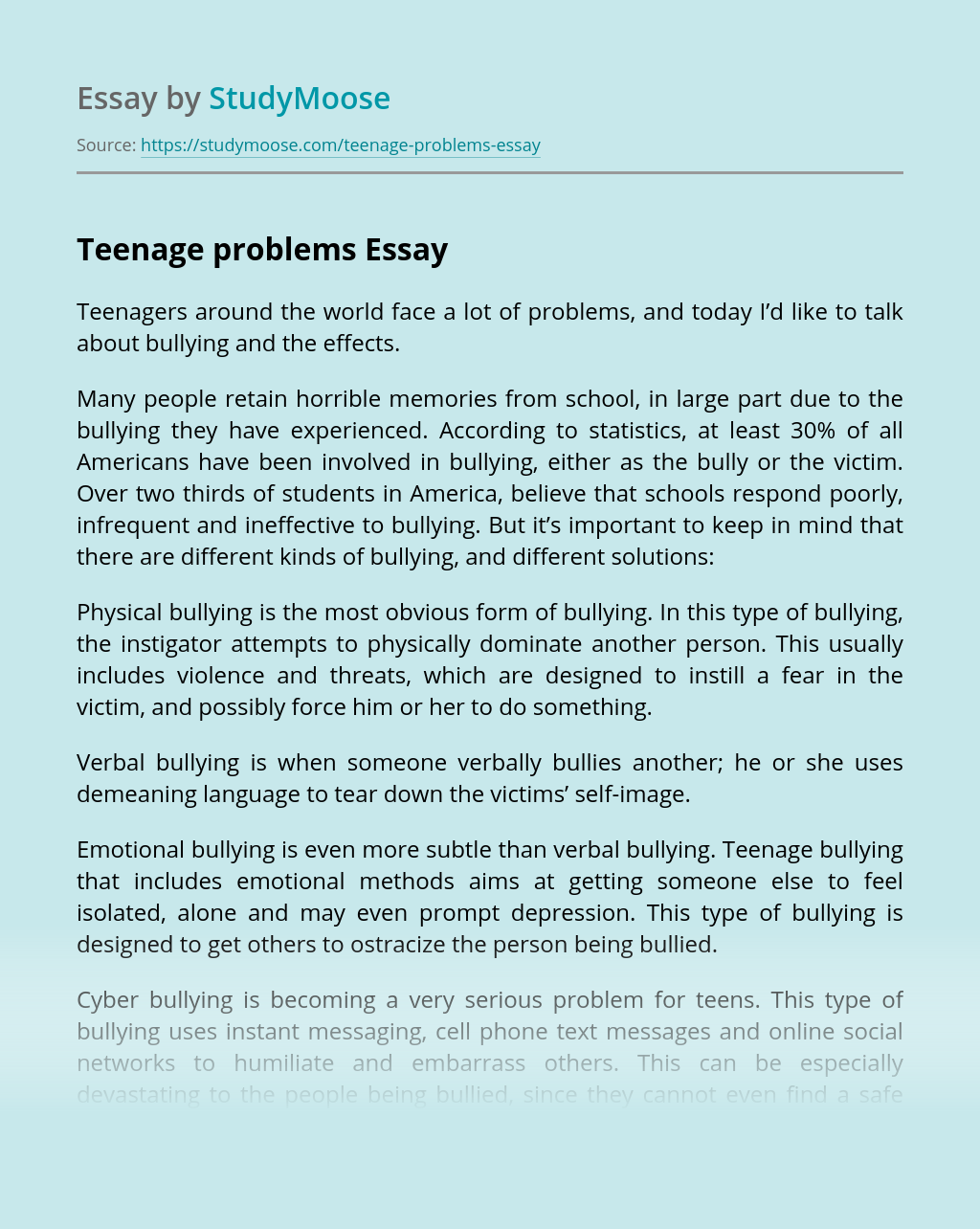