Symbols in "Perelandra" by C.S. Lewis

British author C.S. Lewis’s “Perelandra” is one of the most religiously relevant fantasy novels ever written. Set on the exotic planet of Perelandra (Venus), it contains within its pages the Creation legend of AdNOVELSam and Eve, set in our time but in a different world. “Perelandra” is a story of an unspoiled world, the Garden of Eden denied to the residents of earth but still open to the two inhabitants of Perelandra. C.S. Lewis uses this unspoiled planet to retell the biblical creation myth of Adam and Eve.

In the book, Maleldil, the supernatural ruler of the Solar System sends the English philologist Ransom to Perelandra. Once there, he finds a world unspoiled by sin, inhabited by The Green Lady and her King.

Ransom soon discovers his reason for being sent to Perelandra, when the English physicist Dr. Weston arrives. Weston is soon inhabited by the spirit of Satan, and is used as a vehicle to tempt the Green Lady into sin.

Ransom meets the Prince of Darkness in a battle for the perfection of this world, and corruption or salvation of the Green Lady. Ransom frantically tries to outwit Weston’s master by debate and persuasion, and eventually comes into physical combat with Satan in Weston’s body. At the conclusion of the story, Weston’s body is unusable to Satan, and so the Green Lady and King of this strange world remain obedient to Maleldil and free from sin, preserving the paradise planet that is Perelandra.

“Perelandra” is the tale of a great struggle between good and evil. It’s central theme – temptation – is obviously well addressed in the course of the book. In fact, the entire book is rampant with obvious symbols and parallels between this story and that of the Adam and Eve creation story, and many are explained directly through the thoughts of Ransom, which are written in the omniscient form of narration. Symbol is obvious even in the early parts of the book. Ransom makes contact with an eldila in his cottage, and this is where he is given details of the voyage he is about to make.

The eldila appear as patches of light, and come into the story as instructing Ransom in the task that has been assigned to him by Maleldil. The eldila are the servants of Maleldil, and represent the servants of god, the angels. Maleldil, obviously, represents Christ, as is proved during the course of the book. Later in the book other similarities can be seen between Maleldil and Christ, with Maleldil communicating with the Green Lady just as Christ instructed Eve. We can also clearly see Maleldil’s godly supernatural powers, like the ability to transport Ransom across the vacuum of space in just a small coffin.

He splits one open and drinks from it, and is instantly rewarded with the most pleasurable experience of his life. C.S. Lewis writes “And yet to repeat a pleasure so intense and almost so spiritual seemed the obvious thing to do…Perhaps the experience had been so complete that repetition would be a vulgarity.” Ransom is faced here with his own temptation, his internal debate over whether to obey that feeling he has not to taste again the gourd, or to give into his lust for it’s intense pleasure. This is a minor temptation, and Ransom successfully resists it.

The emergence of the temptation theme may have begun with the drinking of the gourd of the gourd, but it intensifies when Ransom comes across the Green Lady, the Queen mother of this planet. The Green Lady is alone on this planet, except for the King who she is separated from, the only other inhabitant of this planet. It is within her that the battle for the preservation of this Perelandrian Eden will be fought. Ransom soon learns that this woman is unspoiled by all the sins common to earth, and remains free, young, and innocent. In their conversation, Ransom learns of the one law of the planet told to her by Malendil. Malendil requests that neither the Green Lady nor the King sleep on the fixed land that the floating islands surround. They may enter it, but to sleep on it is against the wishes of Malendil.

This is the symbolic forbidden fruit of Perelandria. Sleeping on the fixed land and disobeying Malendil on Perelandria is to eating the apple and disobeying Christ on earth. It is over this that the battle will rage. While exploring the fixed land, the green Lady and Ransom spot a small spacecraft of some sort crash into the ocean nearby. From this, emerges Dr. Weston, who will represent the Devil while on Perelandria. Weston is sent by the Devil to corrupt the planet, and is eventually completely controlled by Satan and left a helpless shell of a man. Dr. Weston immediately makes contact with the Green Lady, begins to try to tempt her into sin.

In “The Screwtape Letters”, another book by C.S. Lewis consisting of correspondence between a senior demon and his assistant who is trying to control the soul of a mortal. In it, the senior demon Screwtape writes:

“Jargon, not argument, is your best ally in keeping him from the Church. Don’t waste time trying to make him think that materialism is true! Make him think it is strong or stark or courageous–that it is the philosophy of the future . . . ” (Screwtape 8)

In “Perelandra” Dr. Weston uses these same tactics to convince the Green Lady to disobey the orders of Malendil. Weston tells her that Malendil actually wants her to “grow older” by disobeying a minor law, in hopes that she will prove her independence and courage. He starts by painting a picture for her of the women of earth, and how courageous they are to disobey God. “They are of a great spirit. They always reach out their hands for the new and unexpected good, and see that it is good long before the men understand it. Their minds run ahead of what Maleldil has told them. They do not need to wait for Him to tell them what is good, but know it for themselves as He does. They are, as it were, little Maleldils. And because of their wisdom, their beauty is as much greater than yours . .”

Weston tries to convince her that breaking the law will make her more independent, courageous, and learned. Ransom always tries to persuade the Green Lady otherwise, by arguing against the point of Dr. Weston. Unfortunately, Weston usually has the upper hand, by convincing the Green Lady that Ransom is “young” and does not know the way of the world. Weston tries to convince the Green Lady that Ransom is trying to keep her young. He says, “He is what we call in my world Bad. One that does not accept the fruit given to him in exchange for the fruit he expected or the fruit he found last time.”

From the exchanges between Dr. Weston and the Green Lady we can see clearly that Dr. Weston does not symbolize the devil. Instead, he symbolizes the serpent from the tale of Adam and Eve. The persuader, the servant of Satan through whom Satan can act to tempt mortals. Dr. Weston is the devil’s agent, a vessel through which the devil can spread his influence. Dr. Weston never sleeps, so he can influence the Green Lady day and night, when she is awake to converse with him or so he can whisper in her ear while she sleeps. It is clear what Dr. Weston symbolizes. Understanding the symbolism behind Ransom is more difficult.

However, it is partially expressed during one of Ransom’s long internal musings. Ransom wonders at one point, “Did Maleldil suggest that our world might have been saved if the elephant had accidentally trodden on the serpent a moment before Eve was about to yield?” By this, Ransom is starting to wonder more and more if actually physical removal of Dr. Weston is what may be required to be end the constant temptation placed before the Green Lady. It is here Ransom wonders if he is not merely intended to witness the power of Maleldil, or to delay the wearing down of the Green Lady’s inhibitions, but instead possibly to act as the hands of Maleldil. It is clear that Ransom is not an angel, but if the devil could have his agent could not Christ have his? Ransom is Maleldil’s representative on Perelandra, and therefore represents an agent of Christ, like a muse or a priest.

Finally, the resolution of the conflict between Dr. Weston and Ransom (the Serpent and Christ’s agent) becomes apparent. Ransom realized that as the hands of God he must stop Dr. Weston from corrupting the Green Lady and destroying this paradise that is Perelandra. The physical struggle between Good and Evil will take place between Dr. Weston and Ransom. Maledil sets everything on the planet into a sleep, and Ransom and Dr. Weston join in battle. At first, evil gains an upper hand, but the power of Malendil flows through Ransom (an obvious reference to the Holy Spirit) and Dr. Weston is hurt badly. Ransom chases Weston about the entire planet, finally ending with Weston’s death in a cave system inside the depths of the solid land.

The battle inside the cave system and the sleep of all creatures on the planet while the battle is going on represents the ongoing invisible struggle between good and evil, concealed before the public eye most of the time, but ever present. Obviously, this battle between Ransom and Weston represents the battle between heaven and hell known in the Christian faith as the Apocalypse or End of Days. The side of good wins the battle, and so Perelandria is not destroyed nor corrupted. In the final scene, the King and Green Lady are reunited, and Ransom is welcomed by two eldila, who prepare him for his trip home, over a year having passed since he left.

Perelandra was one of C.S. Lewis’ religious fantasies, and though a fantasy novel, the religious part is equally obvious. Lewis was a great Christian apologetic in the middle and late parts of his life, publishing some of his best work on religious subjects. Many of the concepts applied to “Perelandria” are also seen in “The Screwtape Letters” another religious fantasy that strikes a bit closer to home. Lewis uses religious symbols in most of his middle and later works, and repetitive symbols and archetypes are quite common. For example, in one of his best known novels “the Lion, The Witch, and the Wardrobe”, we see the similarities between the Lion and Christ. In Perelandra, we see that Maleldil represents Christ. Symbols were used to make even more obvious the theme of the story – temptation – and it’s roots in the Creation story of Adam and Eve. Through symbols, Lewis shows us how temptation can come in many forms, and be defeated only by the strength of the good.

Symbols in "Perelandra" by C.S. Lewis. (2016, Jun 22). Retrieved from http://studymoose.com/symbols-in-perelandra-by-c-s-lewis-essay 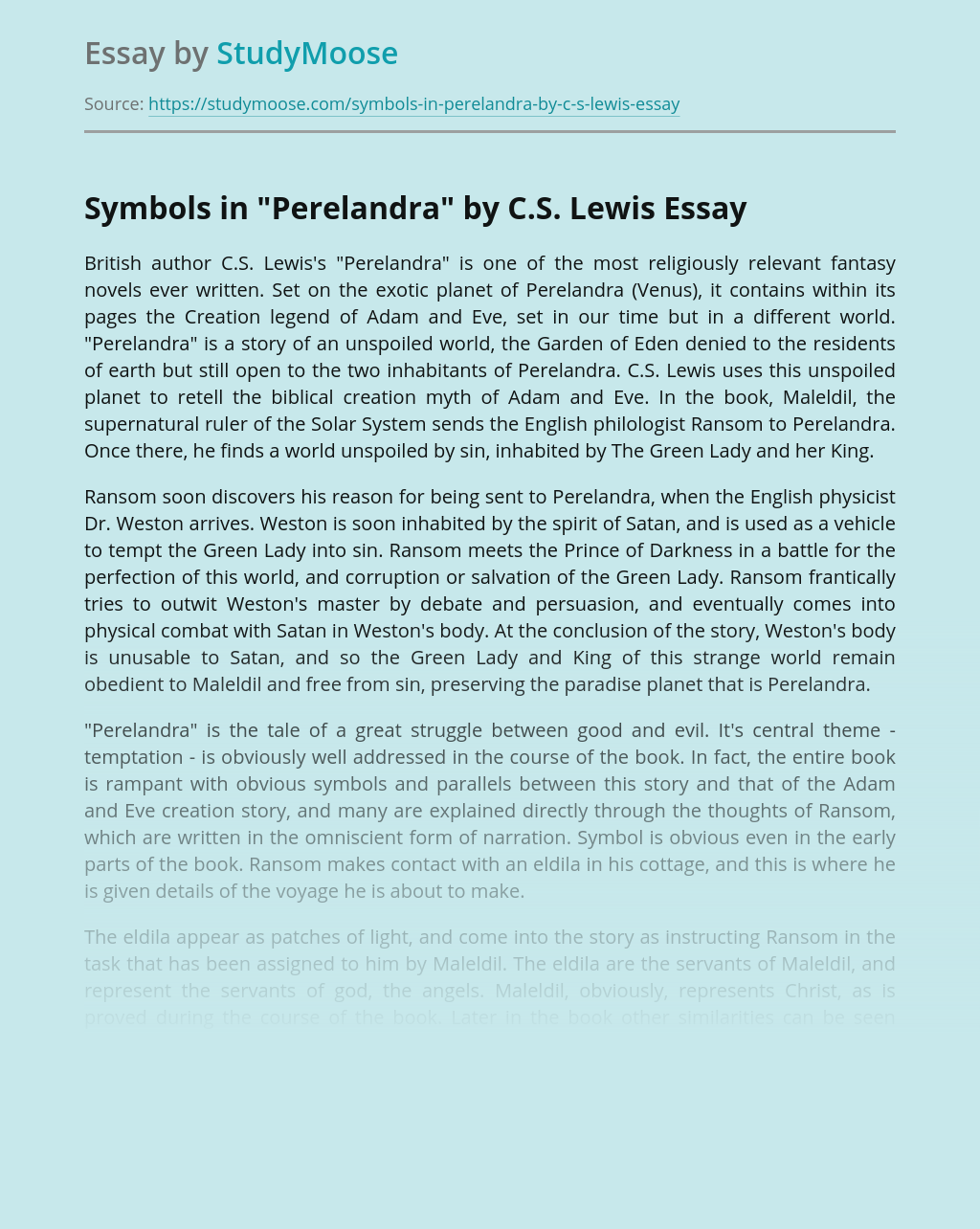 Don’t waste time
Get a verified writer to help you with Symbols in “Perelandra” by C.S. Lewis
Hire verified writer
$35.80 for a 2-page paper
Stay Safe, Stay Original