My best friends name is Brittney Lewis. We have been friends since the ninth grade. We have a few things in common, but we’re mostly best friends because opposites attract. Brittney and I met in a Physical Science class we had together. At first we didn’t talk very much if at all, but after a while we grew on each other and stated hanging out together. Since then we have remained friends and since shared many things together like good laughs, jobs, and even some times that weren’t so good for both of us.

Don't use plagiarized sources. Get your custom essay on
“ My Best Friend ”
Get custom paper
NEW! smart matching with writer

Mostly, I’m just happy to be able to have such a great friend like her.

Like I said before, Brittney and I met in a Physical Science class that we had. That class contained an abnormal group of people. There were a lot of those student types that didn’t care about school, much less class and then there were those that were class clowns who always thought they should have a minute or two to enlighten us with a joke everyday.

As you can see this class was pretty out of control and there wasn’t any way to cool us down. Brittney and I sat next to each other all the time and would sit back and watch as the rest of the people in the class made fools of themselves while receiving referrals to the principal. We always laughed and played around in that class and it made us closer as friends; seeing as how we were the only two normal ones there we sort of became really good friends.

Don’t get me wrong there have been many other times that she and I spent laughing our “asses” off, if not at other people or things then at us.

Many of our laughs come from when we started working together at Dunkin Donuts/Baskin Robbins. Boy, we sure have a lot of bonding memories at that job. We absolutely hated working at that dump and would strongly suggest that no one apply to work there.

It all started off when I got hired in the 10th grade and Brittney and I were in History together when I told her. She immediately asked if I could get her hired and I told her I supposed I could help her since she sounded so desperate when she asked. After a few days after I mentioned to my boss that a friend of mine was seeking employment and wanted to join our staff he told me to call her and tell her she was hired. She was thrilled that I had gotten her the job. The both of us were not so thrilled to find out what our job was going to be like. Soon after working there for a little over a year Brittney and I realized we didn’t have to slave for minimum wage when many of our friends had clean jobs and were getting paid way more than either of us. So, we decided to throw in the towel and quit. It wasn’t long until Brittney and I landed a job together getting paid way more and staying clean at a shoe and apparel store called The Underground Station. We loved our job. It was just another thing that brought the two of us even closer.

Some of the closest people to you, like your mom, dad, uncle, grandparents will tell you what don’t kill you will only make you stronger. During Brittney’s and my last year and a half in Savannah, before moving here, we both hit some bumpy areas in the road.

At this point Brittney and I had been really good friends for about three years. Brittney was sixteen years old and I was still fifteen, about to turn sixteen. Now, sometimes, young folks, like me, get spur of the moment ideas and run with them. The idea was to get a tattoo. I knew my mom would be devastated if she found out, but I wasn’t thinking about her. Brittney already had a tattoo and wanted another one. I didn’t have any and wanted one. Together we made an appointment to go see “P”, our local tattoo artist for under age kids wanting some permanent body art. In less than thirty minutes I had deceived my mom and still knew she would be crushed if she knew what I had done.

Well, eventually, my mom found out and killed me, like I knew she would. She was so heated she told me to get out of her house. Not having anywhere else to go I went to Brittney’s house where she and her mother comforted me for the next four days. My mom loves me dearly, but was very upset with me and needed some time to cool off. Like me, Brittney has been the typical teenager as well, only her “oops” was a baby; not a mistake, but a blessing, Brittney got pregnant at the end of our senior year in high school. I was there 100 percent to help her deal and prepare for what was soon to come.

Brittney and I have been through so many circumstances together; some good and some bad. Together we have grown as both people and friends. Even today we remain best friends. Through all of our laughs, silly jobs, and bad times we’ve never had a fall out or been upset with each other for anything we couldn’t get over in five minutes. Although my mom has since moved from Savannah, Brittney and her mother still go visit her in her new home and my mom still visits them as well. I couldn’t ask for a better friend to have to be there for me when I need it the most or to just call up when I’m bored. Brittney and I will remain best friends for a long time and so will our families. 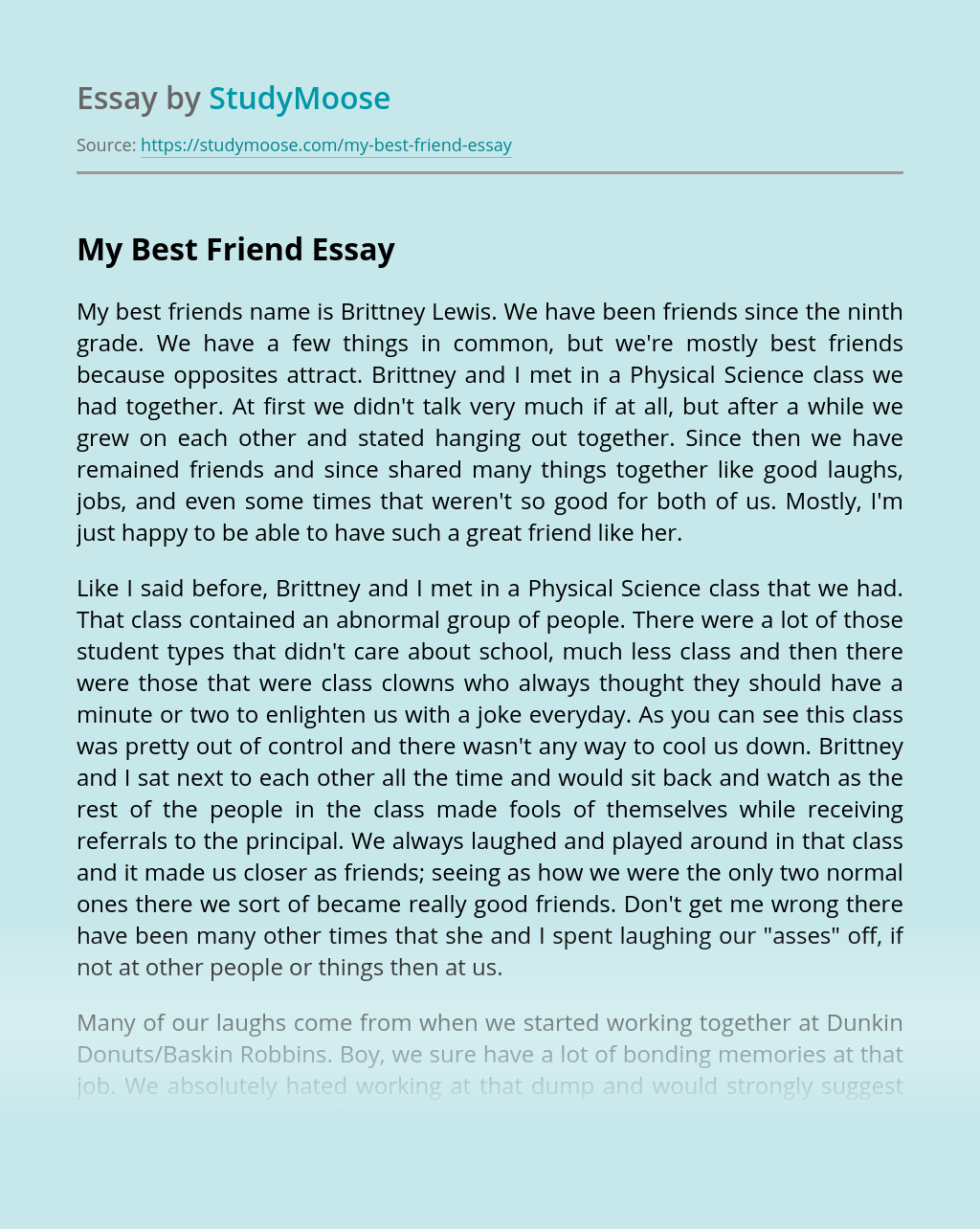