Symbols in Kate Chopin's The Awakening

In Kate Chopin’s novel, The Awakening, Edna, a strong, female character lead, ventures out of her comfort zone while breaking through the role appointed to her by society. Throughout the novel, Edna is seen discovering her own identity independent from her husband and children. Edna is seen always harboring unrealistic dreams that cannot be satisfied, thus characterizing her as a rebellious and selfish adult. Edna’s life is symbolized through a series of parrots, mockingbirds, and seagulls that all form personal and metaphorical connections of freedom between Edna’s world and her eventual awakening in reality, resembling her literal imprisonment within this society.

Don't use plagiarized sources. Get your custom essay on
“ Symbols in Kate Chopin’s The Awakening ”
Get custom paper
NEW! smart matching with writer

Throughout the novel, countless references are made specifically involving parrots. One of which being Madame Lebrun’s caged parrot that shrieks “Allez vous-en! Sapristi” (Chopin, 26) at Mr. Pontellier. Thus resembling Edna’s need to escape her middle-class life for freedom and space. Parrots are trained to only mimic what they’ve heard symbolizing Edna’s struggles to express herself because no one else does openly in this time period.

This symbolizes Edna’s literal imprisonment in this society. In, Edna and the “Woman Question,” Jules Chametzky states “the struggle is for the woman to free herself from being an object or possession defined in her functions, or owned, by others” (Chametzky, 236) despite her middle-class advantages. Furthermore, Edna’s relation to parrots expands by their ability to silent themselves before being “consigned to the regions of darkness” (Chopin, 26). Only when a parrot’s cage is covered, does the parrot stay silent.

This signifies Edna when she is with her family or husband. Otherwise, with the cage uncovered, a parrot has the right to speak. Such as to when Edna is alone, do her thoughts overcome her and she rebels.

Therefore, Edna is characterized as the parrot herself, while Mademoiselle Reisz is specifically characterized as a mockingbird. This is because Mademoiselle Reisz is Edna’s only friend who seems to understand her struggle in social and religious conventions. More specifically, Mademoiselle is seen playing the piano with songs that are not her own, such as a mockingbird who mimics sounds they hear. More precisely, “the mocking-bird that hung on the other side of the door, whistling his flute notes out upon the breeze with maddening persistence” (Chopin, 26) resembles Mademoiselle Reisz, herself. Instantly, in the beginning of the novel, both the parrot and mockingbird are seen being characterized as the same, trapped. However, the mockingbird also relates to Edna in several ways. Along with the parrot, the mockingbird is seen several times being shut-out, symbolizing, once again, Edna’s imprisonment in society. Edna finally begins to realize that there is more to the world then a perfect marriage or family. Furthermore, Edna begins making connections between herself and the birds. For example, Edna is characterized as the literal parrot herself, while the other women in this society are the mockingbird because Edna had the courage to speak the language that no one else could. Edna would attempt to be understood, but the other women would just answer back with any coherent reply, although they understood exactly what she was speaking of. This issue was, the other women in society felt too afraid to stand up for themselves as Edna did. Unfortunately, it eventually led Edna into the darkest state of mind.

Eventually, Edna feels isolated from society, loved ones, and herself. Which leads Edna out into the sea where “A bird with a broken wing was beating the air above, reeling, fluttering, circling disabled down, down to the water” (Chopin, 116) with her. The broken-winged bird symbolizes Edna’s failure to fully free herself from this society. Edna’s wings were too weak to hold herself up above the water before fully submerging. Edna, throughout the story, is seen trapped within a male dominated society, where she is unable to escape. Edna was seen willing to take any risky actions just to free herself from this society. This is why critics describe Edna as a rebellious and selfish adult. Never did Edna have a care for her children, Edna only thought of herself escaping from society.

Overall, the birds symbolize Edna’s female figure in society which provides a greater mean of emphasis on the progression of Edna throughout the story. In the end, it becomes clear that Edna has no means to fully assimilate herself with the ideal of society. This concept leads Edna to the pigeon house where she is able to eventually overcome the strength of the social and religious conventions that entrap her. However, it is Edna’s isolation that leads Edna into her eventual awakening. It becomes clear that each bird was representing a new stage of Edna’s awakening into reality. Ultimately, Edna moves into the pigeon house, which provides Edna with the comfort and security the old house lacked. The pigeon house proves to hold great importance in Edna’s awakening journey because it signifies her quest for freedom and removal of herself from social order. The pigeon house allows Enda to feel, think, act, and dress how she wants too, without the worry of society. Unfortunately, Edna still struggles with leaving behind the society she was stuck in. Edna still had her husband, her children, her friends, and her other lovers that trapped her from every leaving. Due to Edna’s imprisonment in this society, it lead to Edna’s wings becoming too weak to hold herself up anymore, thus, leaving Edna to drown in her own worries.

Symbols in Kate Chopin's The Awakening. (2021, Apr 15). Retrieved from http://studymoose.com/symbols-in-kate-chopin-s-the-awakening-essay 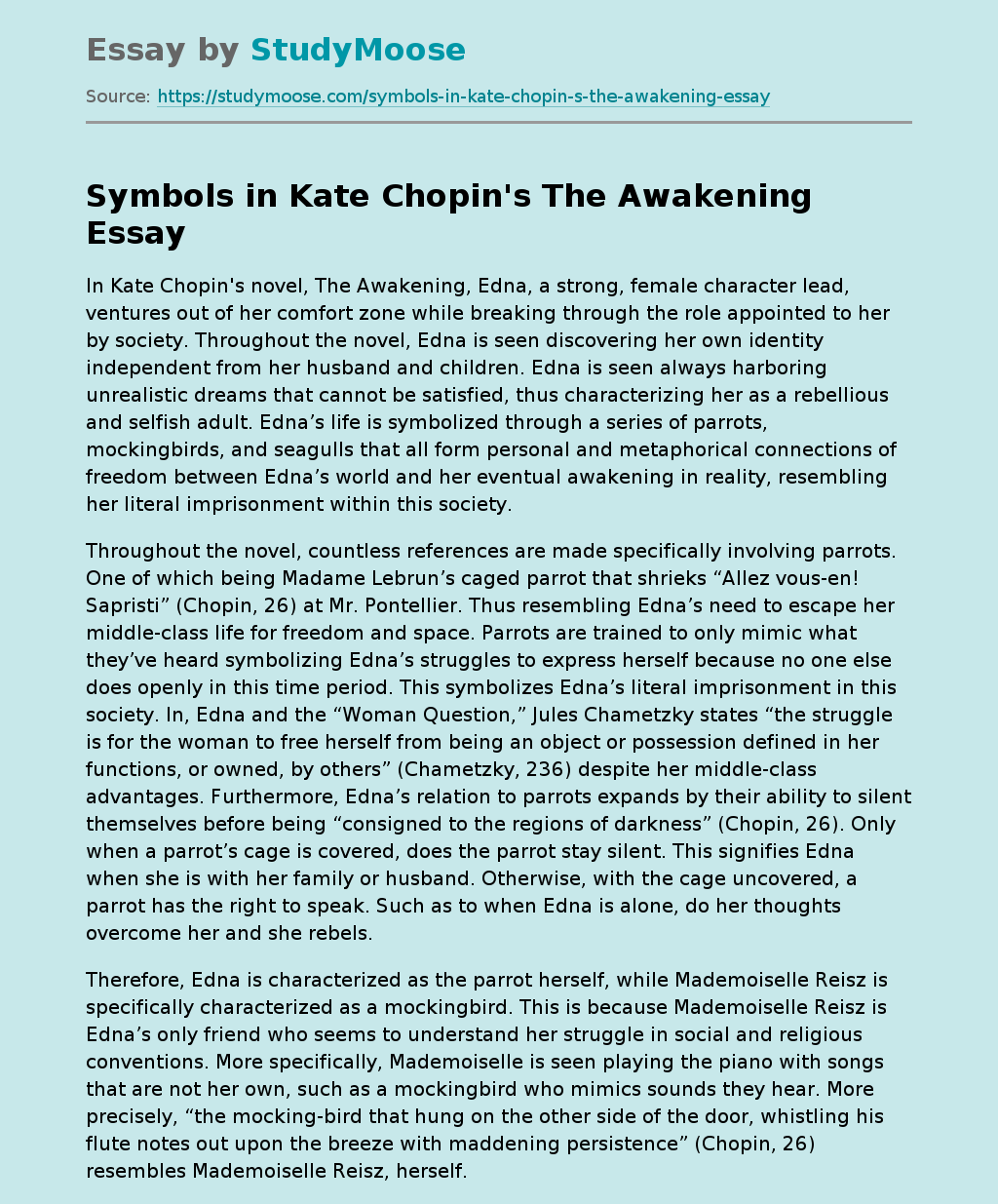