Symbolism in a streetcar named desire

One is the literal understanding, which is obviously what the above fragment suggests itself. Blanche orders Stella to stop cleaning up for Stanley. The reason for this is that she wants Stella to have some right over her husband, instead of him ruling her about; especially as Blanche’s expectations of Stanley are extremely low. Stella is the typical, domestic housewife and Blanche is angry because she feels that women should not be so forgiving and tolerant in front of men; instead, they should be equally treated.

Don't use plagiarized sources.
Get Your Custom Essay on Symbolism in a streetcar named desire Just from $13,9/Page

We can see this because she says, ‘I won’t have you cleaning up for him!

‘ This opinion followed some strong views of the public, around the twentieth century. Williams has used this fact to create a character like Blanche but at the same time, generating a very optimistic Stella! This concept of male dominance corresponds to the earlier idea of superiority. The other recognition from this quote is that the broom may be symbolising Stanley’s personality, just as the ‘red meat’ may also have done.

The focal point from this statement is that a broom is known to be a dusty cleaning up tool. Similarly, Stanley is a filthy, scruffy and ill-mannered being.

In the quote, ‘Let go of that broom,’ Blanche is talking in an ordinary way. However, Williams might be symbolising Stanley through a messy broom. In Blanche’s eyes, this ‘broom’ must be gotten rid of quickly. Putting the two ingredients together (Stanley’s power over Stella and the broom representing Stanley) the outline could be the following: Blanche wants her sister to put an end to the relationship whereby Stanley, a rude and sickening male, has authority over Stella. Throughout the entire play, various dialogues, actions and gestures have been symbolic in some sort of way.

Moving on to scene ten, Stanley rapes Blanche. We are not told this directly but from the symbols Williams has used, it is very much obvious! Firstly, Blanche is admiring her beauty in the mirror of her bedroom while Stella has just been escorted to the hospital, in the previous scene. Narrator: … she has decked herself out in a somewhat soiled and crumpled white satin evening gown… Any item that belongs to Blanche has to be white as we can see from the earlier examples of her clothes and specifically, in the above segment, her ‘white satin evening gown.

‘ More examples will follow. The fact that her ‘gown’ is ‘soiled and crumpled’, tells us that she is stained and it could be a clue that she’ll be destroyed sooner or later (‘crumpled. ‘) Again, Williams is giving signs on things that happen later in the play. This resembles the situation Blanche had been in before, when Stella accidentally spilt a drink on her clothes: Narrator: … Stella pours the coke into the glass. It foams over and spills. Blanche gives a piercing cry. ] … Blanche: Right on my pretty white skirt! … Stella: Did it stain?

Blanche: Not a bit… Stella: Why did u scream like that? Blanche: I don’t know why I screamed! [Continuing nervously]… This is a comparatively long extract with only the key points highlighted. Summarising it into simpler words, ‘Blanche gives a piercing cry’ because her ‘pretty white skirt’ has been ruined. Literally this is not true, but the subtext is that Blanche’s imaginary purity has been taken away. The purity, for example, can be the white skirt (her virginity) and the subtraction of this can be the spilling of the drink.

Later, Blanche denies the stains so this plainly tells us that she may be in a fantasy world, not wanting to accept the truth; mainly her age and her loss of virginity. She also ‘screamed’ and continues to be nervous. This shows that Blanche is shaken up about what happened and finding it hard to recover from the accident. For her, a little mistake like this is a huge catastrophe! Later in the night when Blanche and Mitch break up, Blanche talks to herself facing the dressing-table. This is the same scene as the one in which Stanley rapes her.

Narrator: She catches her breath and slams the mirror face down with such violence that the glass cracks… … Stanley appears around the corner of the building… Unlike plenty of others, this symbol is certainly not ambiguous. It has a straightforward meaning to the public. If glass cracks, it shows a sign of bad luck or a warning of some kind. The bad luck in this case, is that Blanche will soon be raped. The fact that ‘Stanley appears around the corner of the building,’ tells us Blanche’s bad luck will involve Stanley.

Williams is hinting the story line, once again. The last symbol I would like to analyse is the ‘small white radio. ‘ It has only appeared a couple of times during the early scenes of Streetcar. Stanley and his friends are having a game of poker while Stella and Blanche are relaxing. Narrator: She turns the knobs on the radio… … Stanley stalks fiercely through the portieres. He crosses to the small white radio… … With a shouted oath, he tosses the instrument out of the window. The ‘white radio’ could have been used to symbolise Blanche’s purity or innocence.

In fact, we discover later that she is not as innocent or pure as she seems to be. Just in the third scene of the play, Williams may be hinting that Blanche is gradually being ruined. Perhaps her ‘white radio’ being tossed ‘out of the window’ tells us that Stanley is already against Blanche and does not like the sound of her being around. I shall conclude this essay with a brief understanding of symbolism. It is a very useful concept and often needed to give the audience a few suggestions. Symbolism makes people think and broadens their mind with varieties and ideas.

In A Streetcar Named ‘Desire’, symbolism has been significantly used to show the roles of men and women in society and how they expect each other to be treated. It has disguised many possible sexual scenes; therefore, Williams has succeeded in transmitting some of his themes or ideas. Some of these are sexuality, madness, jealousy, racism, cruelty, loyalty, gender relationships and conflict. How does Tennessee Williams use Symbolism to pass on some of his themes or ideas, in “A Streetcar Named ‘Desire'”? AS Level English Literature, Mr. Ducker Parveen Nawab, 10W.

Symbolism in a streetcar named desire. (2017, Sep 29). Retrieved from https://studymoose.com/symbolism-in-a-streetcar-named-desire-essay 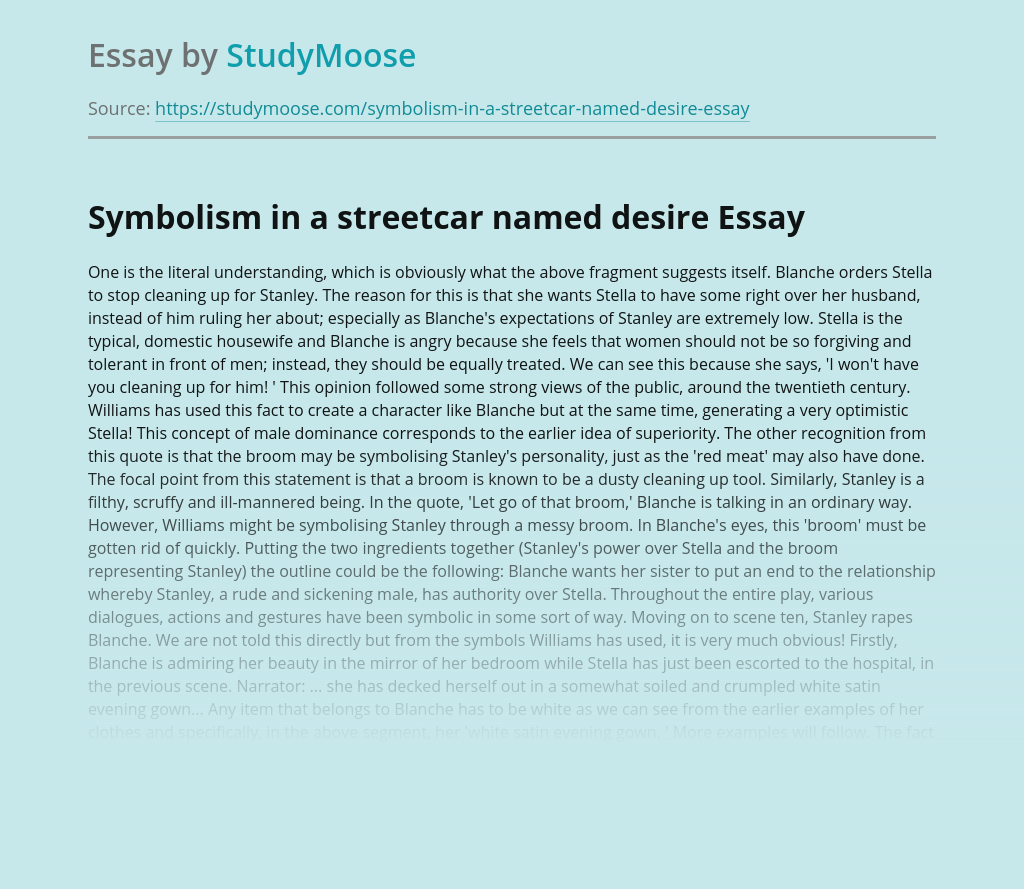 Explication of a Poem Siren Song by Margaret Atwood

Rate this post Margaret Atwood’s “Siren Song” is a lyric that consists of nine three-lined stanzas that neither possess any recognizable rhyme scheme nor rhythm. The speaker of this poem is a mythical creature, a Siren, who addresses us, the audience, when she speaks of the victims whom she lured through the enticing song she...

Rate this post The play “A street car named Desire” by Tennessee Williams is a play that explores different characterizations in the society, by using three prime characters Stanley, Blanche, and Stella. Stanley is a person who lives in the realm of reality while Blanche seeks to live in a fantasy world. Stella is person...

Rate this post There are amazing painters all around the world. Amongst those painters are Leonardo Da Vinci and Pablo Picasso. Both are famous painters with stunning paintings. Pablo Picasso was born in Spain. He took control of the Western art in the 20th century. He discovered his skill in drawing and painting at a...

Rate this post There are nine types of heroes in this world, each of them with their own unique stories, plots, cliches etc. Among those is the classic tragic hero, one who is destined to fail no matter what. In a Streetcar Named Desire, the tragic hero is Blanche Dubois, an aging Southern Belle living...

Symbolism In Poe'S Poems And Stories

Rate this post Edgar Allen Poe is an American writer, editor, and critic born in the year 1809. Poe is well known for his Poems and stories with dark themes and motifs. His works were misunderstood in his time, but since his death, he has garnered quite a following due to his unique choice of...

Rate this post Wilfred Noyce’s poem, Breathless, recorded the physical difficulty and mental stress that one encountered while climbing up the mountain. Simply by looking at the title, it can be seen that the poem describes about one’s state of being breathless and physically tortured. However, the poem does not only focus on expressing the...

Why I Desire to be an alpha man?

How does and why Orwell use Symbolism in 1984

Rate this post How does and why Orwell use Symbolism in 1984 Orwell’s use of symbols in 1984 is incredibly important in the dystopian environment of 1984. It depicts the characters attempt to remember the past and bring a sense of appreciation to what life was like before the totalitarian powers being the party, took...