The SWOT analysis is an assessment of the organization’s internal resources and abilities and the external environment’s opportunities and threats. In order to identify a strategic niche that the organization might exploit, it is needed to analyze the SWOT of Garuda Indonesia.

1. STRENGTH
Internally, Garuda Indonesia has some strength, such as:
Good services, it was proved by three awards that have been received. ICSA Award in 2001 (Indonesian Customer Satisfaction Award) in the category of Total Customer Satisfaction and also Best On Time Airline Award from Schiphol International Airport Amsterdam.

Good brand, proved by two awards received in 2001 from Mark Plus & Co for Experimental & Emotional Branding Champion, and in 2002 received from MARS& SWASEMBADA Magazine for the most valuable brand in airline category.

Good finance, After going through a tough negotiating process and succeeding in completing its debt restructuring, Garuda was awarded the ” Best Corporate Finance Deal of the Year 2001 ” from Air finance Journal-London on April 8, 2002

Good information system, it is proved by two awards.

Awards are given to institutions, businesses and individual as an acknowledgement of their extraordinary achievements or to those who have succeeded in formulating and carrying out an innovative concept or idea.

The pilot is known as good pilots that are wanted by many airlines. The adept knowledge of the Garuda Indonesia pilots is as impressive as the technological wonders they fly. Garuda pilots are one of the most experienced pilots in the world. Among 642 pilots that Garuda Indonesia has, 306 pilots are Captains with the equivalent of 408,294 flying time, or an average of 13344 flying time each. To further hone the capabilities of Garuda Indonesia’s pilots, they are rigorously trained and regularly tested in state-of-the-art flight simulators located at the Company’s modern GAT training facility in Jakarta. Garuda also have a good training program. It is proved by International Standard Training Garuda Aviation Training received an ISO-9001 certificate on 26 January 2000 from TUV, a German-based standards certification institute.

Administration (FAA) on 28 February 2000 announced the Garuda Maintenances Facility had fulfilled requirements as an “approved repair station” in accordance with FAR 145, and had satisfied the quality guarantee needed to carry out maintenance, including engine and aircraft components, on aircraft owned by US airlines.

2. WEAKNESSES
Scanning the internal environment is also useful to find Garuda Indonesia weaknesses. After carefully observation from some literature source, it was found that the weaknesses of Garuda Indonesia can be classified in four items.

1) Financial problem that is most comes from the big debt and the decline of earning.

Details as follows : Even, successfully for debt restructuring on 1998, but in this period the debt still big and in other side, unfortunately earning that is targeted equal to US $ 1.2 million estimated to go down 18% because of the decline of sales. Still facing a big problem in capital structure. Garuda have a big amount of debt and should be able to pay by installments so that is not threated as default. Till first quarterly 2003, debt position Garuda is equal to Rp. 6,121 Trilliun. The problem of this payment is more critical because of the decline of earnings. Operating income of Garuda during 2002 was declining become Rp. 9, 87 Trilliun.

There are a keen conflict between employee and management. Audit finding that Garuda Indonesia is over-employees. This time Garuda employees more than 9.089 people, by 1.906 without clearly position.

Compared to other airline in ASEAN, Garuda is not pertained big airline firm. According to the e-research result, it found that customer still have complaint on Garuda services especially in dated entertainment system, pilot announcements, unexciting lounges, no frequent flyer program and public perception.

4) Barriers of Implementation of the strategy

Struggle from subsidiaries employee that are refuse spin-off strategy. On rt6May, 2003 counted 641 technicians, from 25 domestic airport and 5 abroad menacing to conduct direct action protest this strategy. No good communication between management and employee about its strategy.

EXTERNAL ENVIRONMENT
1) OPPORTUNITY
Global airline industry: The declining of global market that was caused of the September 11, made more than 1.000 aircraft abroad was grounded. This condition has made airline in US getting problem with idled a large number of passenger jets and made them available for leasing at rock-bottom rates. Medium range jets as a Boeing 737-300 can be picked up for $45.000 a month, compared to $ 120.000 two years ago. For Indonesia airline it is an opportunity, airline firm could added its aircraft with lower cost. Travel is the primary means of getting around the country’s 13.000 islands scattered over an area the size of the United States. Economy : Overvalued currency- making it easier to pay fixed costs pegged in U.S dollars Financial problem in most new competitor airline.

Industry: Domestic flight: In years 2002, domestic airline industry, especially in Jawa Timur Province was growth 34.52%. Jakarta – Surabaya is the busiest route, for Garuda it gives the highest contribution is 70%.

Customers : Estimated that there will be 9.7 million potential air passenger in 2003 and 10,4 million in 2004 in Indonesia

2) THREATH
Government : The government regulation about reference tariff that is too low ( SK Dirjen Perhubungan Udara No. 35) Competitors: There are some of new domestic airline competitor come in airline industry such as: Lion Airlines, Tiger Air, Batavia Air, Air Asia, Susi Air. Supply chain: In the leasing world market, the secondhand aircraft prices are drop. Even though this condition give advantages, cause Indonesia domestic airliner can lease by lower price, but in other side for Garuda itself, this condition make a serious problem. New competitor can add its aircraft, and then make low-cost and low price strategy. It makes the competition in domestic route become so tight. Further, price war in Indonesia domestic airline industry cannot deny anymore. 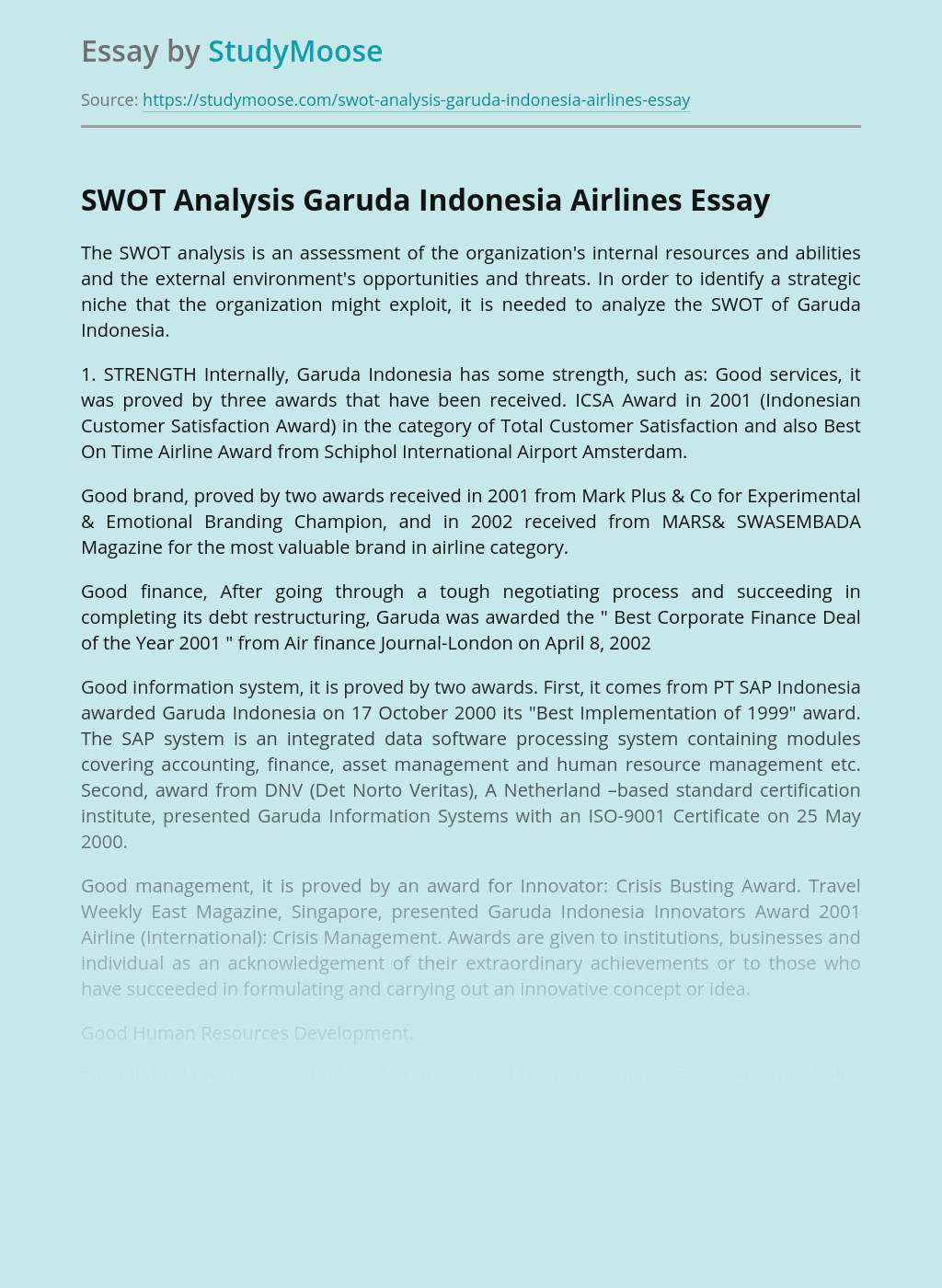