Surveillance is all around us always watching always tracking

Surveillance is all around us, always watching, always tracking our every move. It affects everyone in everyday life, and it has been a part of society for as long as people have been able to watch each other. Many books and movies have been written about it. The semblance of privacy that people are now willing to have. To forgo actual privacy to have a system monitoring your every move and somehow feeling “safe”. A camera always recording, a beady red eye following, scanning, analyzing.

Don't use plagiarized sources. Get your custom essay on
“ Surveillance is all around us always watching always tracking ”
Get custom paper
NEW! smart matching with writer

It eerily sounds like something out of a horror movie. But this is no horror movie, this is real life and we created it.

Today I will be analyzing two book covers that seem to convey this message, that surveillance is craved. Both covers show exactly how pervasive surveillance is in America. Without surveillance life would be very different, I feel that there would be a lot more crime because people tend to act differently when they aren’t being watched all the time.

I am in no way implying that all people act differently while on camera but there some individuals who behave completely opposite of their normal behavior when they are. But surveillance isn’t all bad. There are some instances actually most instances where having cameras and surveillance leads to people’s privacy being respected a lot more. Like anything in life there is always a good side and a bad side to it. These books go into detail about what exactly surveillance is and the upsides and downsides of a society that is semi obsessed with keeping track of one another.

And how advancing technology plays a huge role in integrating surveillance into everyday life. By the end of this essay you will better understand surveillance’s role in modern society.

In Randolph Lewis’s book “Under Surveillance”, he shows us how surveillance cameras in America are now synonymous with being watched and less about privacy or being protected. No matter where you’re at in America you could show any single person a picture of a camera and they would instantly recognize what it is. Most people don’t even register that there are cameras watching them because they are desensitized to them. They have become such a permanent fixture of society that people don’t even question their purpose, however there will always be some people that do register the cameras and question why they are there and what purpose they serve. Nowadays it’s gotten to the point that anyone with the funds to do so can go out and buy pretty much any kind of surveillance equipment. This has led to some radically inappropriate uses of this technology. But like any piece of technology, there is good sides and bad sides to surveillance. The good side would be the sense of security and peace of mind knowing that whatever the camera is pointing at is relatively safe because it is being watched and recorded. If anything were to happen, they would be able to figure out exactly what happened and who did it. The bad side to this would be the invasion of privacy and the inappropriate uses of surveillance equipment. Privacy doesn’t tend to mean what it used to anymore. You used to be able to be confident that your privacy was respected and that no one was watching you especially while at home. Now with the technology available to the average person you can’t even be sure that you’re not being watched in your own home through your own devices or through someone else’s planted devices. There is no such thing as complete privacy anymore.

To some people privacy is overrated, a relic, something of the past and no longer critical in today’s modern world. That constant surveillance is needed to police the people to insure safety and freedom for all. David Lyon’s book, “The Culture of Surveillance”, shows us the intricacies of surveillance and the freedoms we are willing to give up for the “greater good”. The cover depicts cameras watching a cover of themselves in a seemingly endless cycle. How we actively participate in surveillance doing this to ourselves and sometimes acting like it is something done to us. We want to be policed but at the same time we desperately want that sense of privacy we used to have. For example, many of us have apps on our phones that allow us to view our loved ones and others in general with the touch of a button. How many of you have read the term and conditions? We easily allow them access to our phones and private information because we fail to read the terms and conditions of such apps. We deem the information to mundane and overloading to read and simply hit accept. It seems like we could care less to what they have access too as long as we get what we want, that instant connection. It’s like a drug flooding our system with dopamine. Though when we perceive a breach in our privacy, we act indignant and demand it be corrected. When in fact we created this breach ourselves and now we must suffer the consequences. We demand safety and connection for all, but we also want complete privacy and complete access to everything. What a walking contradiction, we humans are.

To be watched or not the be watched, that is the question. Both these books talk about surveillance and privacy. Both have you questioning how you feel about it and what you are willing to sacrifice for them. Making you really think about how your life is affected by this. The thing that caught my eye about both these books was the Inception style layout of how the cameras seem to be watching not only everything but also themselves. I feel that is an interesting way to design the cover and it really catches the reader’s attention. Making you feel like yes, you are watching but who is watching you. For example, when you are talking to a friend or coworker about something of interest and then ads for that seem to be everywhere you look now. A sense of wariness fills you and makes you think how much they can really see and hear. The color scheme also plays a part in how the book gets you thinking. It has for the lack of a better term an institutional like feel to it. As if we are slowly creating prisons for ourselves in what we consider free, modern society. That surveillance isn’t just for people who have done wrong but also for those of us who submit to being watched for a sense of safety. The different art styles show a different perspective from each author and how they seem to view surveillance or maybe how they want people to view it. Though the similarities in both has you really thinking about surveillance because you have two opinions that differ a bit, but both seem to support each other at the same time. The concept that “big brother” is always watching seems to really hit home.

We want so much in today’s world that we seem confused at times. Do we want to be watched and kept safe or do we want the utmost privacy? Today’s technology offers us one or the other. If we want complete privacy, we would need to go completely off the grid. But if we want safety, we need to forgo some measures of privacy for it. These two book covers show us what surveillance in today’s world means and how it comes to play in our lives. It is up to you to decide what you crave most in your life. Do you want safety and connection or privacy? In the end the piper will be paid, it is up to you to decide what you are willing to give up.

Surveillance is all around us always watching always tracking. (2019, Dec 07). Retrieved from http://studymoose.com/surveillance-is-all-around-us-always-watching-always-tracking-example-essay 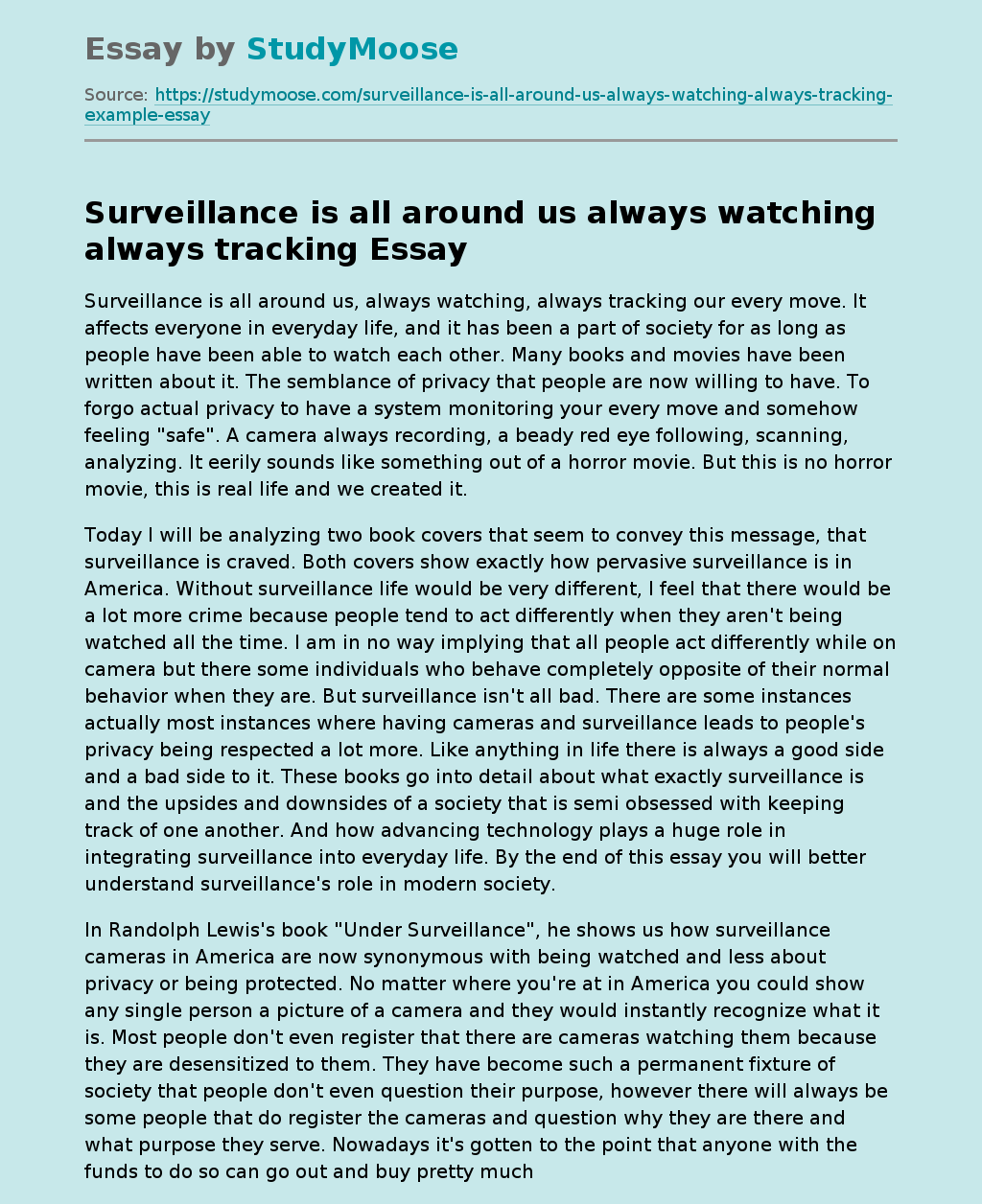