The resultingsystem has high-efficiency. This paper presents an overviewabout the comparison of the basic P&O algorithm with themodified P&O algorithm used for partial shading condition interms of complexity, accuracy, cost, and basic concept of each method.

Due to the shortage of fossil fuels, there is a huge hunt ofrenewa ble energy sources.

Energy that comes from naturalresources such as sun light, wind, rain, tides and g eothermalheat is classified as renewable energy. Photovoltaic (P V) is themost elegant method to produce electricity without movingparts, emission, or noise.

PV energy is becoming an importantpart of the world’s renewable energy. PV arrays are a reliableenergy source and an efficient t ool for the migration of globalwarming. It is known from a Power -Voltage curve of a PVpanel, there is an optimum operating point such that the PVdelivers th e maximum possible power to the load.

There are many MPPT techniques thathave been introduced and elaborated extensively byresearchers . Perturbation and Observation (P&O) can track theMaximum Power Point (MPP) all the time, irrespective of theatmospheric conditions, type of PV panel, and even aging, byprocessing actual values of PV voltage and current. P&Omethod is widely used in PV systems because of its simplicityand ease of implementation. A number of soft computing basedMPPT meth ods also have been proposed, such as Fu zzy LogicControl (FLC) and Arti ficial Neural Network (ANN) . Theadvantages to deploy FLC technique are it does not need exactmathematical model and may operate well under continuouslychanging atmospheric conditions .

Yet, the effectiveness of thistechnique depends majorly on the user information . Eventhough MPPT with ANN controller can provide goodperformance, the neural network must be trained specificallybeforehand with the PV array . Despite of the availability ofalternative MPPT techniques, Perturb and Observe (P&O)algorithm remains the most familiar and broadly utilized due toits easiness and very low price implementation cost . Besides, itcan be used practically in microcontroller or Digital SignalProcess ing System. Nevertheless, the traditional P&Oalgorithm still possess many drawbacks. Therefore, theupcoming section of this paper will give more detail s on theP&O algorithm and the changings made by many researchersto improve the algorithm, especially when the condition of partial shading occurs .

The basic idea of Perturb and Observe (P&O) algorithmincludes the perturbation of solar PV operation point matchingto the sign of the last increment of P hotovoltaic power . In thistechnique , any changes of perturb voltage V are directed bythe algorithm to the PV module operating volt age. P&O willdetermine that the operational voltage ought to be increased ordecreased by V when the procedure of observing out putpower has taken place . Figure 1 shows a lot of detail s on theoperation of the standard or regular P&O algorithm. Based onthe gathered info , P&O algorithm is in the position to predictwhen the operational vol tage is approaching the VMPP bycomparing the actual & the prev ious cond ition of the power, P,and voltage, V. In short, the next perturbation to reach the MPPwill be the same if there is an increment of P and contrariwise.

Series of steps for perturbation and observation will be carriedout until the systems reach the MPP. The two most importantconditions or the parameters for this algorithm are theperturbation step size and also the time between algorithmrepetition . Somehow, large perturbation step size is required tohurry up the respons e, however it will contribute to the loss ofpower due to the imprecise tracking. As the step size isdecreased , the MPP tracking system will slow down theresponse. As a result , the time taken to complete the algorithmextended . Studies had been done to c hange the algorithm sothat the tracking speed and algorithm correctness should beimproved. Many researchers have proposed variable step sizeconcept since P&O MPPT with fixed step size does not provide a better tradeoff .

Fuzzy logic co ntroller (FLC) to change the step size, asrepresented in Figure 2. FLC functions to determine theacceptable step size to be utilize in the algorithm. For thesimulation cause , a Buck DC -DC conver tor with Pulse WidthModulation (PWM) controller was additi onally included in thePhotovoltaic system. As a result, the changed or modifiedP&O become cap able to improve both the steady state and dynamic performance of the system.

The step size can also be varied by changing the decision partof the Figure 1. A s represented in Figure 3, whenever theperturbation goes away from the MPP i.e P < zero , the dutycycle was decreased by dividing the voltage with A and viceversa, where A may be constant larger than one . The improvedP&O had successfully united the speed of relatively biggerstep size & the smooth tracking of small step size of P&O.
The common disadvantage of traditional or conventional P&OMPPT, that is the step size issue , can be resolved bychan ging/modifying the algorithm. Most of the modified P&OMPPT have shown better performance compared to the conven tional MPPT .

a. Overview on P&O MPPT under Partial Shading Condition

The solar irradiation would be the most probably become non-uniform once there’s partial shading. In fact, the P hotovoltaicarray seldom receives unifo rm irradiation most of the time, asmostly the PV arrays are shaded by significant cloud, trees orclose buildings etc. which can cause partial shading condition(PSC). The MPP can be easily tracked when the solarirradiance is constant, as shown in Figure 4. Tracking processis started at the recent value of P&O MPPT, which is 0.

Voltage will keep increasing based on increment of perturbedvoltage. Photovoltaic power will also begin to increase until itreaches the MPP. Further increment of an array operat ingvoltage will lead the Photovoltaic power to decrease. Thesame tracking procedure will not occur when once thePhotovolta ic array experiences the PSC. As it can be seen inFigure 5, the P -V characteristic was observed to have variouslocal MPP due to t he three different solar irradiance levels.

The P -V characteristic occurred to be nonlinear & complex.

In an experiment, the operati onal voltage was unable toincrease as the power began to decrease. As a consequence , thestandard P&O MPPT wa s trappe d in local MPP even when itwas supposedly able to generate more electric power .
b. Modified P&O for Partial Shading (PS) ConditionDue to PS condition , researchers have attempt ed to modify theMPPT algorithm so that it can work effectively under anyavaila ble irradiation level. Koutroulis, E and Blaabjerg, hasproposed an up to date idea based on controlling the DC -DCconverter connected a t Photovoltaic array output, as it has been shown in the Figure 6

The converter acting as the stable input power load.
Experimental results show that under any partial shadingcondition, the algorithm was even able to track global MPP. Additionally, time taken for tracking process was muchshorter with significantly less P hotovoltaic array powerperturbation steps. The mai n advantage for this technique isthat it can be applied in P hotovoltaic arrays without need ofknowledge on the PV modules configuration within the PV.
However , another researcher suggested an easy and logicalhybrid MPPT algorithm for P hotovoltaic . sys tems. Fig.7 showing a well explained narrative about the proposedtechnique . First of all , the aim is to spot the classification ofthe appropriate operational voltage corresponding toirradiance level by using ANN. Then , P&O algorithm will beutilized to trac k MPP within the local area depending on theclassification. In general, this technique or methodologycombining the advantages of P&O and ANN MPPT.

Depending on the simulation & experimental results, hybridMPPT has comparatively less cost, urgent response, and verysimple structure compared to conventional method . An innovational checking method for P&O algorithm wasproposed by another researcher to resolve the issue of partialshading . It is a lso very direct, fast & reliable method , asshown in t he Fig 8. Mainly , checking of algorithm is used toconfirm if t he algorithm already achieves the real MPP or onlya local MPP. Furthermore, this algorithm doesn’t need anyadditional electronic component and it could find true MPP under any operational con ditions .

All the changed P&O MPPT are cap able to attain the trueMPP. Table 2 depicts the comparison between the threemethods that have been elaborated in the previous section. Thepropose d technique with the checking algorithm is absolutelythe best since it has lower value of cost and that is the simplest than the other techniques.

As a r sult, it can be concluded that P&O MPPT Algorithm isthe most effective MPPT for PV syste m bec ause of itscharacteristics of being easy, user friendly & low er costimplementatio n. Still, the step size issue and partial shadingissue have an effect on the accuracy of the algorithm to attainthe true MPP, as well as its role for the power losses . Hence,some changes must be formulated in order to increase theperformance of P&O MPPT. This paper has overviewed andcompared three modified techniques/ methods for eachproblem and as a result; the best technique is the one that cangive good accuracy, simple and low est cost. 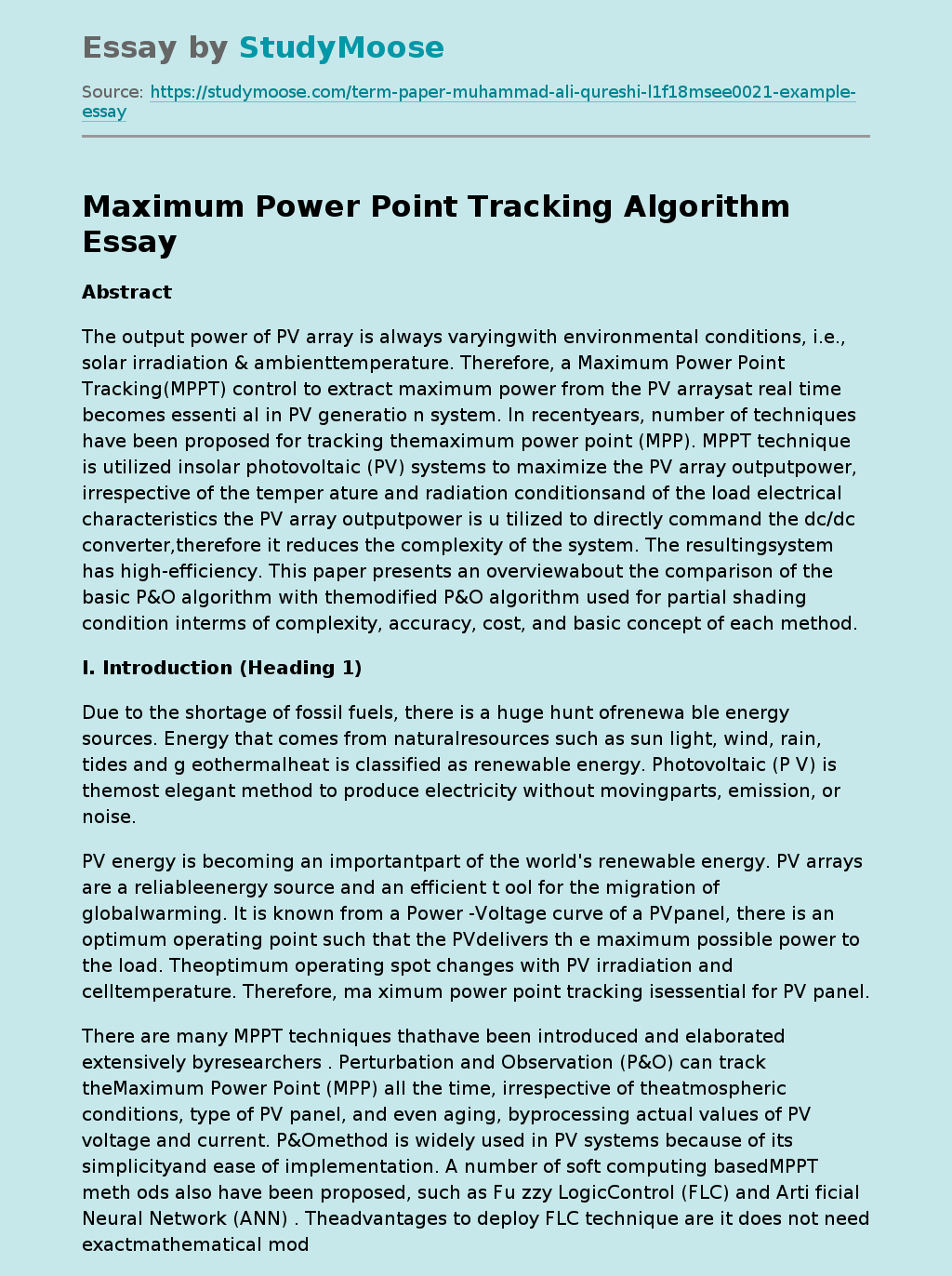