Don't use plagiarized sources.
Get Your Custom Essay on Surfaces and Guideways Just from $13,9/Page

Base Course – is the material laid on top of the sub grade consisting of crushed stone or gravel.They may be stabilized by means of lime, Portland Cement, or Asphalt Sub-grade or Sub-base – is the earth beneath the road, properly arranged and graded, compacted and stabilized. It is defined as the “supporting structure on which the pavement surface and its special under-courses rest” The design of pavements involves determination of the types and thickness of the various layers of material making up the pavement.

Failure mechanism is to be fatigue caused by certain number of repetitions of a significant load Asphalt Concrete is considered to be flexible and the failure mechanism is assumed to be plastic deformation due to the cumulative load over the life of the pavement Asphalt Concrete Pumping – is the ejection of water and sub-grade soil through the joints and cracks along the edges of the concrete pavement. Fine materials in a saturated base form a slurry with the water in the base. This is what usually happens on a faulty design method: Asphalt Concrete pavements are often used on lightly traveled roadways. It is not always necessary to use complicated design methods for them; rather design may be by precedent with standard thickness being specified for each of the pavement layers according to the type of the roadway involved (such as local street, collector, and arterial)

Design Considerations Design Considerations SN is an abstract number (SN) that represents the structural strength required for a pavement to perform in accordance with the design criteria. Gravel Equivalent Thickness Pavement Maintenance and Rehabilitation Pavements are subject to varying degrees of distress short of outright failure that reduces their serviceability. Asphalt Concrete pavements are subject to a variety of types of pavements distress or failure. these include: Transverse Cracking – Cracks approximately at right angle to the pavement center line. These may be caused by hardness and shrinkage of asphalt or differential thermal stresses of asphalt concrete or may be reflection cracking. Block Cracking – Cracks forming large interconnected polygon usually with sharp corners or angles.

These cracks are generated by hardening or shrinking e.g. asphalt or reflection cracking for underlying layers such as cement treated base. Alligator Cracking – A series of interconnecting or interlaced cracks caused by fatigue of the asphalt concrete surface under repeated traffic leading. [Cracking is due to foundation movement at subgrade] Longitudinal Cracking – Cracks approximately parallel to the pavement centerline. These are caused by poorly constructed construction joints and shrinkage of the asphalt concrete surface. Raveling – Wearing away the pavement surface caused by dislodging of aggregate particles and binders. This is usually a result of insufficient asphalt binder in the mix or stripping of asphalt from particles of aggregate. Drip Track Raveling – Progressive disintegration of the surface between wheel paths caused by dripping of gasoline oil from vehicle Bleeding or Flushing – The exuding of bitumen on to the pavement surface causing reduction in skid resistance. Bleeding is generally caused by excessive amount of asphalt in the mix or low air void content. It occurs in the mix in hot weather.

In addition failures confined to small areas, such as isolated potholes may be patched. Railroad Track Railroad track serves to provide guidance for rail vehicles and to spread wheel loads so as to keep bearing pressure on the subgrade within acceptable limits. Overall Track Structure The overall track structure typically consist of subgrade, ballast, ties, rails, and rail fastening. these are arranged as follows: 1. the ballast rests on the subgrade 2. the ties are embedded in the ballast 3. the rails usually rest on the tie plates and are fastened to the ties by spikes. other track fastening include joint bars which are fastens rails together longitudinally; gage bars, which are steel critical locations such as curves and switches; and rail anchors, which are used to resist longitudinal motion of rails relative to tiess Cross-Section of a Railroad Structural Design of Track Structural design of track is primarily a matter of selecting the correct rail sections and tie spacings.

Rail sections are designated by shape, with several standard shaped being available, and weight. The heavier the rail, the greater its resistance to bending. all other things are equal. Tie spacings determine the number of ties the wheel load is spread over, and hence the bearing pressure at the bottom of the tie. The closer the ties are to one another the less the bearing on any one tie, and hence the smaller the track deflection under the given load Different Design Procedures Talbot’s Formula Continuation Major Track Components: Ballast Major track components include ballast, ties, and rail. Ballast consist of a layer of crushed stone , crushed slag, gravel or similar material which is placed on top of the subgrade and in which the ties are embedded. Ballast has a number of functions, these include: 1. Distributing tie loads to the subgrade 2. Anchoring track against lateral vertical and longitudinal movements. 3. Providing for drainage of water away from rails and ties.

4. In cold climates, including frost heave by preventing capillary action and providing insulation for the subgrade 5. Facilitating maintenance, especially maintenance of track grade and replacement of ties 6. Retarding growth of vegetation in the immediate vicinity of the track structure 7. Providing some resilience to help absorb dynamic loads Major Track Components: Ties Ties are used to maintain gauge and to transmit wheel loads from the rails to the ballast. Railroad ties were traditionally made of wood, but pre-stressed concrete is now widely used. Tie dimensions are usually as follows: depth 7 in (180mm); width 8 – 9 in (200 – 230 mm); length 8 – 9 in ( 2.4 – 2.7 mm) for ordinary track but up to 22 ft (6.7 m) for ties used for turnouts and crossovers. Ties must me spaced a minimum of 10 in (255mm) face-to-face to allow tamping of the ballast under them; this means that for 8-in (200mm) ties a center-to-center spacing of 18 in (455mm) is the minimum possible. Actual spacings usually somewhat greater, ranging (for wood ties) from 19.50 to 22.25 in (495 to 565 mm).

Because their greater weight makes them more effective in supporting and anchoring track, spacings for concrete ties are usually even greater that this with two concrete ties being roughly equivalent to three wooden ones. Major Track Components: Rails Rails support and provide guidance for the flanged wheel loads to the tie. Rails are designated in terms of the shape of their cross section (with certain standard designs available) and by their weight per unit length, usually quoted in pounds/yard. Rail weighs in common use range from approximately 85 lb/yd (42 kg/m) to 150 lb/yd (75 kg/m) with weights of 110 lb/yd (55 kg/m) or greater recommended for lines used by 100 ton cars. In North America, rails have traditionally been manufactured in 39 ft lengths which are fastened together by joint bars. These rails are still commonly used for yards sidings and lightly traveled track. Because of their great length, these rail are subjected to high temperature stresses, wears and to metallurgical defects.

Track Maintenance Summary The Ballast In order to perform these functions effectively, it is important that ballast consist of some type of granular material. Ideally, it would be a strong, angular, open-graded aggregate, which will provide high strength and stability through interlocking of the particles as well as high permeability to drainage. The Ties The Rail Railroad track is inherently unstable structure which is subjected to heavy dynamic loads. As a result track alignment will change over time that’s why it is important to have a continues maintenance. Common maintenance task include restoration of horizontal and vertical alignment, replacement of worn or defective ties or rails, and cleaning for restoration of ballast. When possible, these are combined into a single operation, often referred to as track resurfacing. This consist of jacking up rails to the desired elevation, removing and cleaning dirty ballast, and replacing defective ties and rails.

Tamper used in Track Resurfacing 1. Traffic Loading – consists of the amount, type and weight of vehicles that are expected to use the roadway. Only truck use of a roadway facility is considered since it is these types of vehicles that are sufficiently heavy to damage the pavement. 2.Soil Subgrade Strength – roadbed soil is the foundation on which the pavement will be constructed. Soil strength must be known such that the pavement thickness is sufficient to spread the load induced by heavy vehicles on the soil without the soil deforming (rutting). 3. Pavement Material Characteristics – the types of materials that will be used in the pavement buildup (asphalt, concrete, crushed stone, rubblized base, etc.) their respective thickness and strengths. 4. Environmental – addresses the impact of environment on foundation/subgrade strength. Seasonal impacts of wet, dry, freeze, non-freeze environments will affect strength of soil and nonstabilized materials (e.g. crushed stone base).

In addition pumping is the most important failure mechanism. Pavement design method include computer optimization programs, mechanistic methods, and empirical methods and vary a great deal in complexity. Railroad track design usually involves a rational design procedure based on Talbot’s Formulas. In the design of track an important consideration is the stiffness of the overall track structure which is a result of rail weight, tie spacing and subgrade support. Both pavements and railroad tracks are subject to a variety of types of wear, distress and deterioration and are the subject of extensive maintenance program carried out by railroads and highway companies. 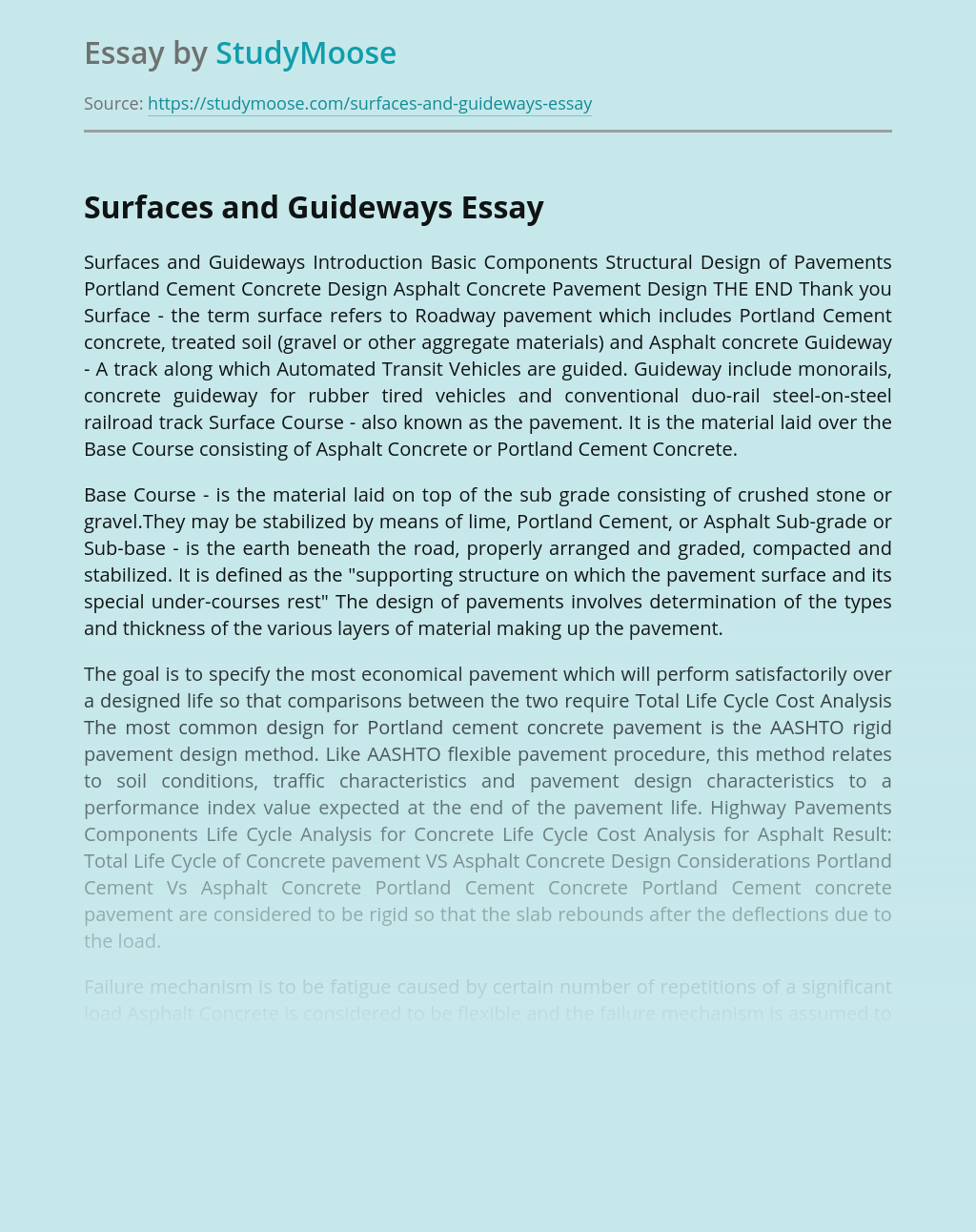 Tertiary level education is necessary for a successful life. As eschewed by, Dr. Eric Williams, the first Prime Minister of Trinidad and Tobago in the early 60’s, ‘The future of our nation lays inside the schools bags of our children.’ In those days it was very evident that the level of education in Trinidad and...

Scenario You graduated 3 months ago and are working with a home care agency. Included in your caseload is J.S., a 60-year-old man suffering from chronic obstructive pulmonary disease (COPD) related to (R/T) cigarette smoking. He has been on home oxygen, 2 L oxygen by nasal cannula (O2/NC), for several years. Approximately 10 months ago,...