Support Use Of Education

1.1. Identify the legislation that governs the use of medication in social care settings – The following legislations have a direct impact on the handling of medications within a social care setting: ·The Medicines Act 1968: basis for licensing, sale, supply and manufacture of medicines. ·The Misuse of Drugs Act 1971: this Act is designed to control the use of dangerous or potentially harmful drugs such as opiates (drugs which are derived from opium plants). This Act also is designed to prevent the misuse of controlled drugs.

Don't use plagiarized sources.
Get Your Custom Essay on Support Use Of Education Just from $13,9/Page

·The Misuse of Drugs Regulations 2001: Act which intends to prevent the non-medicinal use of certain drugs, particularly those that can lead to dependency (example: morphine) and other drugs and medicines which are derived from opium.

The Health Act 2006: It is an Act provided strengthened governance and monitoring arrangements for controlled drugs. ·The Misuse of Drugs Safe Custody Regulations 2007: relates to handling, storing and keeping records about controlled drugs. ·The Health and Social Care Act 2008: It identifies the responsibilities of the Registered Manager in a care setting for protecting people in relation to the risks presented by medicines.

– The classification of medicines are all related to The Medicines Act 1968, while working with medication it is good to have an understanding and working knowledge of the common types of medications. There are 3 categories of classified medicines under The Medicine Act 1968: * Prescription only medicines (POM): these medicines can only be obtained through prescriptions. Examples: antibiotics, anti-depressants, opiates based painkillers, heart and diabetes medications. Over the counter or pharmacy medicines (OTC or PO): these are available only from a registered pharmacist but without a prescription.

Examples: smaller packs of paracetamols (packs of 32s) and ibuprofen up to 400 mg. General Sales List (GSL): these are medicines that may be bought from any shop without a prescription and without the need for a pharmacist. Examples: analgesics, antacids, antiseptic gels and ointments. * Controlled Drugs (CDs): these are prescription only medicines, defined as ‘’potentially addictive’’ and therefore are subject to additional legal requirements under the Misuse of Drugs Act. They are the subject of abuse when taken without a medical reason. Examples: diamorphine, fentanyl and methylphenidate.

2.3. Describe changes to an individual’s physical or mental well-being that may indicate an adverse reaction to a medication. – Some changes to an individual’s physical well-being includes: rashes, breathing difficulties, swellings, nausea, vomiting, diarrhoea, stiffness, shaking, headaches, drowsiness, constipation, weight gain (whether these changes are the result of a medication), we need to check contraindications and medicine interactions before administration.

3.1. Describe the roles and responsibilities of those involved in prescribing, dispensing and supporting use of medication – The doctor’s role is to determine what medication the patient needs. It is his/ her responsibility to prescribe the correct medication, the dose, and the type of medication needed and the correct amount to be administered. – The chemist’s role is to dispense the medication that is written on the prescription. It is his/ her responsibility to make sure that the items they give out are correct and are exactly the same as what is written on the prescription. If there are any mistakes then they should contact the doctor who prescribed the medication.

– The carer’s role is to make sure that the service user gets their medication. It is his/ her responsibility to give the service user the correct medication, at the correct time with the correct dose. Everything that is given out must match what is printed on the MAR sheet and must be signed for after administration. 3.2. Explain where responsibilities lie in relation to use of ‘over the counter’ remedies and supplements. – If I saw a service user taking over the counter remedies, I would ask where they got it from and why they needed to take them, I would then inform the manager and document it in the care plan. If the client is not capable of telling me, I would remove the remedy and inform the manager again.

4.2. Describe different forms in which medication may be presented – The majority of medications are formulated for oral administration. This means that they are taken through the mouth, in the form of a tablet, capsule, liquid or suspension. These medicines come in a variety of shapes and sizes, colours and tastes. Solid dose oral formulations are made either as tablets or capsules, and are formulated to aid compliance and reduce adverse effects. Liquid preparations are measured when administered, using a 2.5 ml or 5 ml spoon, oral syringe or a medicine cup. Again, all oral preparations must be shaken before measuring out the prescribed dose.

4.3. Describe materials and equipment that can assist in administering medication – There are varieties of medical devices to enable people to take their medications. As a support worker, I am aware of the different products on the market to aid compliance with prescribed medications. Among these are the following: *Compliance aids: these are used to encourage and support people to take their medicines. *Monitored Dosage System (MDS): An MDS is usually used for solid oral medicines such as tablets or capsules. *Inhalers: a variety of different inhalers are available in the market today. Aerosols, dry powder inhalers, nebules and powder inhalers are marketed in a variety of preparations from turbo halers, auto halers, accuhalers and evohalers. *Percutaneous Endoscopic Gatrostomy (PEG) and naso-gastric (NG) tube administration: some people may not swallow medicines in the conventional way but they could be administered via PEG or NG tubes.

6.1. Explain the importance of the following principles in the use of medication: consent, self-medication or active participation, dignity and privacy, and confidentiality * Consent: medicine cannot be given to someone without their consent. Consent, or refusal of consent, should always be a decision that is made with full information. People should know about the medicines before they decide to take them, and they should also know about the potential consequences if they refuse them. If someone persistently refuses to take their medicines after they have had all the information, the refusal should be recorded and their GP informed. * Self-medication or active participation: people should be encouraged to take as active a part as they wish to in administering their medications. Example: some people want help with working out their tablets, but are fine to put on cream or lotion. * Dignity and privacy: staff should always be polite, gentle and respectful of the service user’s wishes and preferences. Privacy may be needed if there are other occupants in the home and clothing is being removed (example: removing and applying a new patch). *

Confidentiality: information about a service user’s medication is confidential. It should only be shared if permission has been given by the service user or in exceptional circumstances. 6.2. Explain how risk assessment can be used to promote an individual’s independence in managing medication – Risk assessments will not eliminate risks, but they will help identify ways to reduce the risk as much as possible. Good risk-assessments do not stop people from doing things; they should enable people to do more because safeguards are put in place to support people in doing what they want. 6.3. Describe how ethical issues that may arise over the use of medication can be addressed – There are situations where families may request that medication is stopped because they feel that someone’s quality of life has deteriorated and they should not go on. This is not a decision that families can make on behalf of someone. In the absence of a decision from the person concerned, there can be no question of stopping medications at the request of a family. Another issue can be based on personal or religious beliefs. There are people who are vegans and vegetarians and this means that some people’s religious beliefs meant they are not willing to take capsules that are made from gelatine which is an animal based product. In this instance, this problem can be resolved with the doctor prescribing an alternative formulation.

Support Use Of Education. (2016, Jun 04). Retrieved from https://studymoose.com/support-use-of-education-essay 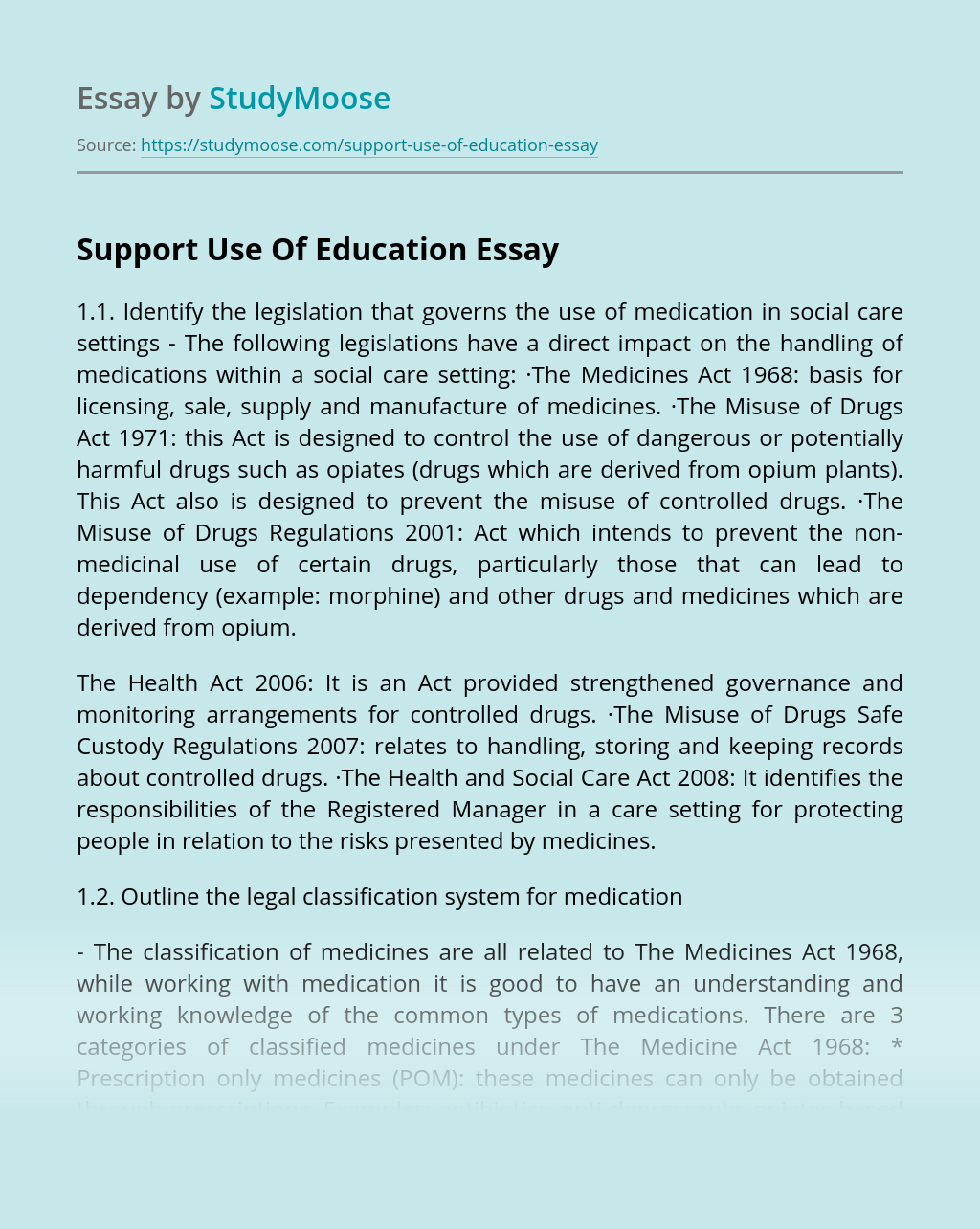 The Pros and Cons of Employee Drug Testing

Drug abuse in the workspace is a popular, global problem if we believe in an American research study done by William F. Current. He quotes, that 75% of all drug addicts who are older then 18 years work within an organization. Again, 75 % of them consume drugs at work. He assumes, that if you...

Prescription drug abuse has had a strong hold on American society for decades and it does not appear to be diminishing. While some drugs have decreased in popularity over the years others have increased. For instance, there has been a surge in the popularity of Ecstasy and other “Club” drugs and an increase in marijuana...

View sample
Drug Addiction Is a Growing Problem in Punjab

1) Throughout the border state of Punjab, whether in villages or cities, drugs have become a scourge. Opium is prevalent, refined as heroin or other illegal substances. Schoolboys sometimes eat small black balls of opium paste, with tea, before classes. Synthetic drugs are popular among those too poor to afford heroin. 2) The scale of...