As every single of our presence is an integral part of our society where we live and develop, we all should appreciate our family especially our mothers who make a big contribution for society by giving a birth to children and by raising children. Undoubtedly the desire for the golden middle, as the most favorable and harmonious state, is the goal of every woman. Engage in their own development, grow as a professional and earn well, while being a caring mother and a loving wife – this is the position that allows a woman to take place in all spheres.

Don't use plagiarized sources. Get your custom essay on
“ Measures to Support Female Employees in Japan Country ”
Get custom paper
NEW! smart matching with writer

Since the beginning of the twentieth century workforce of females increased from only 1.878 in 1965 grew rapidly and reached 2.729 in 2014 (numbers are given in 10.000 person %). If earlier only a man earned money in the family, then now the woman has the opportunity to work as well and receive salaries. Thus, a woman became less and less dependent on a man, and as a result, now we are faced with such a problem that a woman has to make a choice between a family and a career.

For many women, work is a part of life, and there are women who no longer know how to “sit” at home and raise children, as for them work and the team are necessary. Both spheres of life require a lot of time from a woman, so the question arises of choosing one over the other or balancing both together.

As Japan has been experiencing a demographic crisis: shrinking the birth rate and increasing the number of aging population for the past decades while Japan’s total fertility rate reached a postwar low of 1.

57 in 1989 and this situation provided a major stimulus for promoting Work-Life Balance (WLB) policy and to make revision for actual legal regulations in order to create a harmonized environment particularly for working mothers to raise children and to work. As if work life balance is well maintained then there will be a chance that most of the socio-economic issues can find its solution.

Low fertility rate and aging society has been one of the main issues in many developed countries especially in Japan. This change in demography of Japanese society is referred to as population aging and the total population will fall by a third from 128 million in 2010 to 87 million in 2060. One of the scholars and economists at Tohoku University created a countdown to national extinction and according to its estimations, there is a high possibility that Japan might have one remaining child in the year of 4205. It seems that the desire not to have children does not seem to be an underlying factor in the birth rate. Many family also want to have children however most of them are giving up on motherhood was not a choice but rather an unavoidable outcome of the reality of contemporary life in Japan as it was hard to make a harmonization of work and life. According to the “The 13th birth trend basic investigation” of National Institute of Population and Social Security Research, we can see that working female employees make selection between either work or marriage/maternity/childrearing.

As even in 2000~2004 only 13.4% of female employees return back to their work after using a maternity leave while in contrast more than 40% of them quit their jobs. So, this figure also indicates that even though having a very accurate legal policies and government initiatives yet the percentage of women continuing their work before and after maternity has not changed during 1985~2005 period of time. (See diagram 1) This figures gives us an idea that some social challenges still remain and there is a lack of enforcement of legal policies which was created to promote a work life balance policy. One of them is a male-centered traditional Japanese-style workplace practices.

“In order to return for a well paid jobs, usually permanent workers should provide a “flexible” working schedule that suits the company’s convenience, which typically includes long working hours, unscheduled overtime, and business trips as well as frequent relocations.”” As a consequence the number of female employees who choose family over their career growth increase as they adjust with the husband’s schedule and takes all household responsibilities including childcare duties as well. Another evidence for this case is, the time spent on housework and childcare by Japanese wives are about 10 to 15 times that of husbands. According to JILPT “National Survey of Households with Children”: Outline of the National Survey of Households with Children (NSHC) in both periods (2012 and 2014) overall time spent on housework by husbands was significantly low with only about 30 minutes while in contrast wives even with regular employment status spent more than 150 minutes on a daily basis.

Average Housework Time Per Day by Wives and Husbands

As women undertake the majority of household tasks, they simply cannot work “flexibly” according to company demands as men have done. As the result, “Most women are then sorted into a “career interruption course:” staying at home when they give birth to children and start childcare, then re-entry into the labor force when childcare duties lighten.”

Another contributing factor for working mothers not being able to keep a work life balance (WLB) is due to the “Kindergarten Waiting List” which has been occurring especially in urban areas. As if working females’ child is on the waiting list, it make the situation difficult to continue to work because it means that they cannot rely on nursery school to take care of their child and they choose either to take longer maternity leaves or quitting job. This issue has been emerging especially in urban cities of Japan such as Tokyo, Yokohama, Osaka, Chiba and etc. According to the Japan Times news on April 12, 2018, more than 55,000 children (90% of them are the number of children 0~2 years) are waiting for nursery school places in Japan as lists grow for third straight year. Besides that, there is a strict point system and deadlines for application in order to be eligible to get an offer to a daycare. Points can be added or minimized depending on a variety of factors, such as health issues, employment, marital status and others. Having higher points can secure to be enrolled but not exactly in the following months, there still might be some months to wait. Among couple of day care institutions the most desirable one are public center which are municipally run, subsidized and monthly fees are based on annual income of parents. Other options are either private (partially subsidized) and completely private centers which are expensive to afford for everyone.

Another example of social challenges to have a harmonization of work and life for working mothers is mental pressure by their co-workers which constituted to the emergence of “matahara ????” a new Japanese terminology and widely spread among nation and it is an abbreviation of “Maternity” and “Harassment” words from English. In order to take preventive measures towards discrimination and harassment some actions and campaigns have launched in a national level. One of them is “Matahara net” which was founded by one of Japanese female who suffered from the same harassment. Main purpose of this organization is to raise the awareness, especially of those who are directly and indirectly causing this issue, to organize complaints from suffered females and to develop laws and to provide both emotional and social support for victims of this harassment. More precisely, due to this type of harassment there has been arising major problems linked to demotion, termination of employment, termination of contract or making them in a condition to choose the option of voluntary resignation. It also accompanied by the high risk of miscarriage and early birth.

According to Matahara net website there are two major reasons behind emergence of this issue. Firstly, it is a gender-based division of roles. Despite the fact that in the last decades how Japanese females also heavily got involved into the workforce and reaching a managerial, senior, CEO positions, yet traditional beliefs still exist in most Japanese families which is males play a role of main financial supporter of the family and females play a role of housewife by being responsible of both house chores and child care. Secondly, it is due to long working hours. Another factor which leads to the difficulty of WLB is irregular working hours.

Although standards of working hours have been stated on LSA (Article 32) and there is exceptions to statutory working hours (LSA Article 36 (1)), on condition if there is a written agreement majority labor union or a majority representative in the place of business is concluded and its submission to the authorities is required, thus even the specified hours on the agreement goes beyond of statutory working hours, it is not considered as illegal. Hence, it has been one of the encouraging factor to have long working hours as long as it was concluded and notified in a written form regarding to LSA basic rules on working hours. On the other hand according to Act on Child Care leave Article 17, employer is not allowed to order overtime exceeding 24 hours per month or 150 hours per year (since for regular workers are allowed to work overtime for a maximum of 360 per year) for its employees whose children is not yet enrolled in elementary school. However this article is applicable only for those employees who have been working continuously for one year under the same employer.

Besides that, in 1995 more than 230,000 Japanese female workers quit their jobs in order to take care for their children as they were not able to keep a harmonization of work and life. If we take a look at the issue from company’s perspective, due to the high number of resignation of female workers because of pregnancy/maternity leave/child care leave, is being a big loss of qualified human capital and at the same time it is considered as a damage for the company’s budget. Moreover, management also has been changed; until hiring a new workforce as a replacement, burden has increased to their colleagues and it has been both time and financial demanding process for the company to hire a new employees.

The overall picture of work-life balance policies in Japan

In order to diminish the happenings of above-mentioned challenges and to effectively utilize human resources, Japanese government took some actions that enable individuals especially working mothers to keep their career growth together with their commitment to the family. 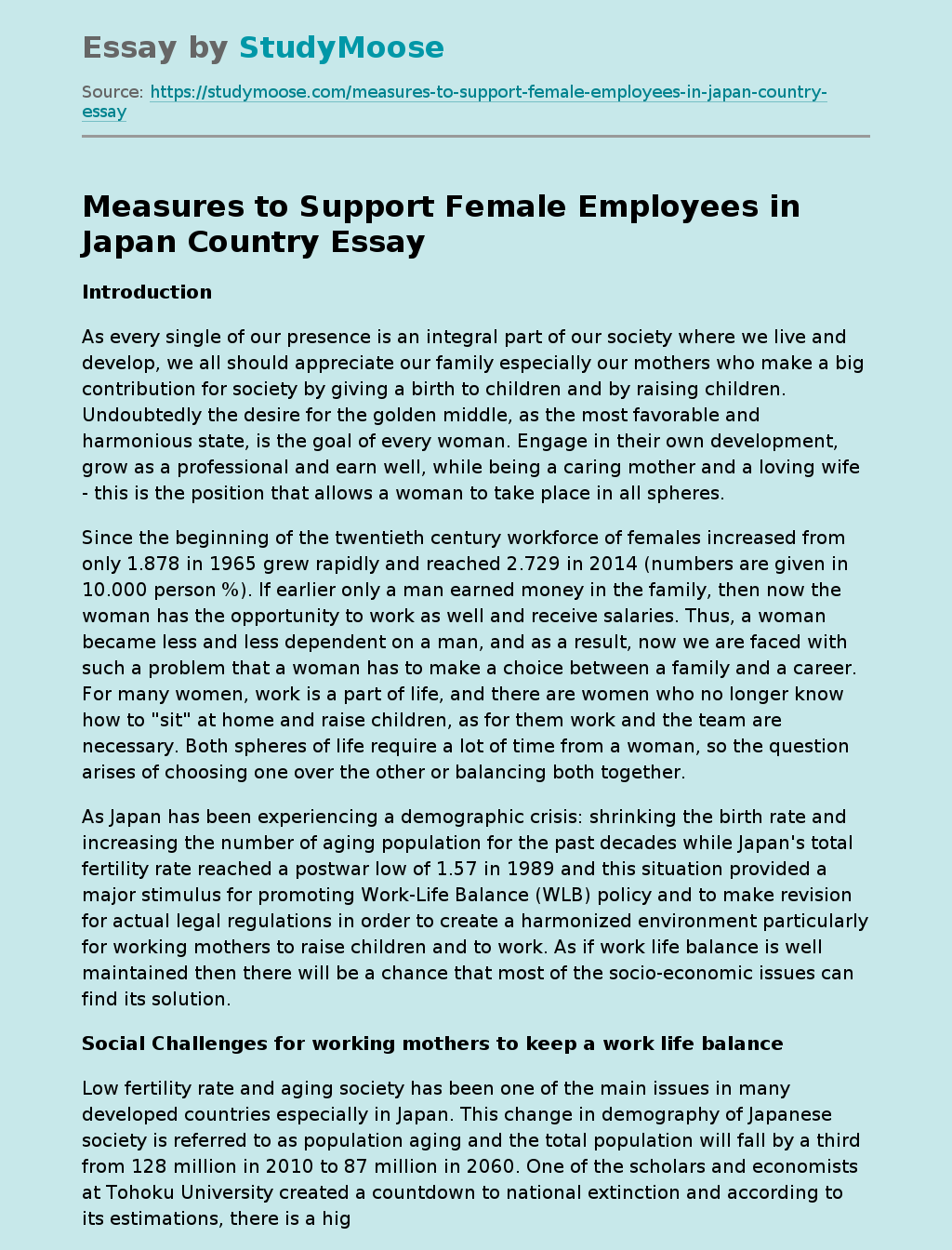