Caricature to Character: An Assessment of Jim's Development in Huckleberry Finn

Caricature to Character: An Assessment of Jim’s Development in Huckleberry Finn

In the novel The Adventures of Huckleberry Finn, Jim, the most notable black character lives with Huckleberry Finn as a slave with Miss Watson and Widow Douglas. At the first mention of his name, Jim’s character is conveyed as a stereotype of the time period: dense, dull and dim-witted. As the story progresses, Jim’s actions reveal his true nature: compassion, kindness, and intelligence.

Don't use plagiarized sources. Get your custom essay on
“ Caricature to Character: An Assessment of Jim’s Development in Huckleberry Finn ”
Get custom paper
NEW! smart matching with writer

His adherence to superstition, worldly knowledge gained as a slave, and smart decisions guide both him and Huckleberry through their journey along the Mississippi River. Jim’s development throughout the novel The Adventures of Huckleberry Finn follows a dynamic range, progressing from a reflection of a stereotypical pre civil war slave, to a compassionate character: a unique portrayal during this time period.

At the start of the story, Jim’s character follows closely to the common “Sambo” stereotype.

Characterized by laziness, jovial attitude, and a simple mind, this stereotype endured throughout the time period with constant references to it in media at the time. “Care free and irresponsible, the sambo was quick to avoid work while reveling in the easy pleasures of food, dance and song. His life was one of child-like contentment.”(Riggs, Marlon) Without the access to widespread information, guidance and knowledge was often passed within families, instilling information, or in this case, stereotypes. “A stereotype may be so consistently and authoritatively transmitted in each generation from parent to child that it seems almost a biological fact” (Boskin 12) This is evident in Huckleberry’s actions towards Jim in the start of the book.

Without outside, one-on-one interaction with Jim, they felt a sense of contempt towards him, thinking of him as nothing more than a slave, incapable of compassion or intellect. The novel often contains appalling racial speech that would be realistic in the time period.

Jim, having been born into slavery, adopted a core set of values and a reliance on superstition to explain his situations. Like the vast majority of slaves at the time, he was without education, and is assumed to be illiterate. These values that he is constantly making efforts to uphold include a specific and important one: trust. Especially in his circumstance, Jim’s interaction with others can be dangerous for him, and finding someone he can truly rely on and trust is incredibly difficult. When this trust is broken, it may never be repaired. “Dat truck dah is TRASH; en trash is what people is dat puts dirt on de head er dey fren’s en makes ’em ashamed.”(Twain 86) This quote is taken from a scene in the middle of the novel while Huck and Jim are caught in the midst of treacherous weather. The fog is so dense that Jim loses Huck in the night. Huck attempts to make a joke and play a trick on Jim, making him believe that the whole storm never happened. This is not taken well by Jim, and could potentially have compromised their important relationship.

Jim’s relationship to Hcuk throughout the novel changes drastically from its shallow beginning. Both Jim and Huckleberry share similar traits: neither are formally educated, both share good instincts and intelligence, and lastly, they are both estranged from society. This makes them both already a good fit for one another. From the moment that Jim and Huckleberry meet on Jackson’s island, his whole attitude towards him changes once they begin to have a more symbiotic relationship. This is interaction is written with Huck relying on Jim for his knowledge, instincts, and his general help with the task at hand. Regardless of the circumstances, Jim is able to bring a prior experience or tidbit of information that can aid them. On the other hand, Jim relies on Huck as his only hope to become a free man, and his source for hunting knowledge and impulsive attitude. Once they reach this equal ground, the majority of Huckleberry’s prejudice towards the black race as a whole, and most importantly Jim, completely disappears. Although Huckleberry may have been able to rid his mind of this impartial preconception to black people, he still struggles with thoughts about whose property is whose. Huckleberry still retains these thoughts during his internal conflict about whether or not to continue harboring a fugitive slave. If word of his wrongdoings were to be discovered, he could be outcasted within his community.

Throughout the novel, Jim’s character undergoes numerous changes, making him one of the most dynamic. His relationship with Huck defines these arcs. From the start to the end, his qualities are become fully developed. As stated above, Jim’s qualities at the start of the novel reflect stereotypes of the time period. and since his character was created by a white author, it both shows how the white population may have seen black individuals. Twain clearly shows optimism towards race relations during the time the book was written. While tensions were high between Huckleberry and Jim by nature of forced interactions with other characters, the mere fact that all apprehension between races had vanished while alone together shows Twain’s true feelings toward racism. While on Jackson’s island

During Huckleberry’s own moral changes during the end of the novel, he rejects institutional racist beliefs and is able to finally overcome his opinions on the “bad place” implemented by his limited civilized conscience, and decides to adhere to his own personal moral values. This finally allows him thus allowing Jim to be free. This turning point in the novel started from the very beginning of the novel, when Huck warns Jim with “get up Jim hump yourself! They’re after us!”. The significance of the word “us” in this sentence may come across as subtle and unimportant, but it shows the first moment where Huckleberry and Jim are equals. “I was the best friend old Jim ever had in the world, and the only one he’s got now; and then I happened to look around and see that paper· It was a close place. I took it up, and held it in my hand. I was a-trembling, because I’d got to decide, forever, betwixt two things, and I knowed it. I studied a minute, sort of holding my breath, and then says to myself: ‘All right, then, I’ll go to hell’ -and tore it up. It was awful thoughts and awful words, but they was said.” (Twain 214). Twain’s controversial decision to include this in the novel shows a turning point in American literature at the time of writing. Having a protagonist of a story fully commit to multiple sins, and freeing a black individual was a portrayal that is the first of its kind.

Caricature to Character: An Assessment of Jim's Development in Huckleberry Finn. (2019, Nov 19). Retrieved from https://studymoose.com/stuart-mcnaughtonmr-doubledayhonors-english-iii-american-example-essay?post 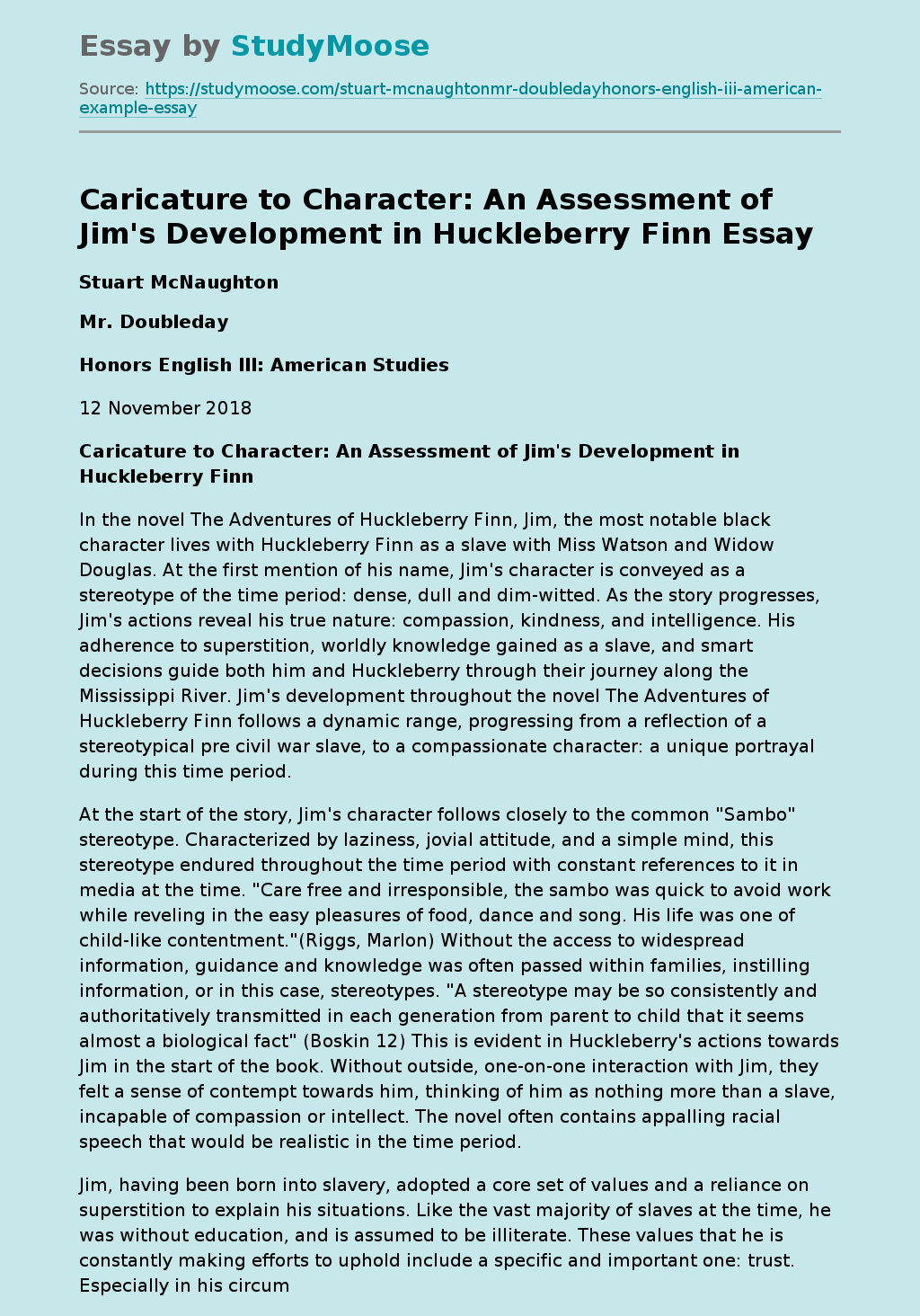