The banking and financial markets in Australia have gone through a major transformation in the last two decades. The number of bank branches has increased considerably. Banking services now can be easily accessed online. Today more than 90% of transactions are conducted electronically. In 1980s large-scale deregulation of the financial markets was initiated due to which by 2001 there were no government owned banks in Australia.

Since then the banking services are made more accessible and easier. Nowadays major banks are competing with each other for deposits through the offers of high interest rates.

Don't use plagiarized sources. Get your custom essay on
“ Structure and Activities of Australia’s Financial Institutions ”
Get custom paper
NEW! smart matching with writer

The financial market of Australia to date is stable and flourishing but this has made the investors complacent. Hence, they are underestimating the risk factor and are not equipped to face an irregularity in the market.

Changes in the Structure and Activities of Australia’s Financial Institutions

The word bank is derived from the Italian banca, which means bench. Money lenders in Northern Italy originally did business in open areas or big rooms with each lender working from his own bench.

Presently, the services offered by a bank depends upon the type of bank and the country. Services provided by a bank generally include taking deposits from their customers and issuing checking and savings accounts to individuals and businesses, extending loans, cashing cheques, facilitating money transactions, issuing credit cards, ATM cards, and debit cards and storing valuables in a safe deposit box (Wikipedia 2006).

In Australia more than twenty years ago, banking services were operated using passbooks and offered only at branches between 10 am and 3 pm, Monday to Friday.

Today, banks are effectively open 24 hours a day, seven days a week and customers need not even leave home or place of business to do their banking. Banks also realize that some customers prefer to bank face-to-face.

The number of bank branches has increased considerably. The vast majority of Australians live just a few minutes from their nearest branch. Since the advent of communications technology, several industries have adopted new ways of delivering their services. Banking is no different. In addition to being widely accessible in the traditional way, it is now also easily accessed online. Today more than 90% of transactions are conducted electronically.

In this paper an effort has been made to analyze and evaluate the performance of Australia’s financial institutions over the last 20 years, along with a study of relevant reforms that triggered major changes in the operations of these institutions.

In December 1980 the first cash management trust was established in Australia by the merchant bank Hill Samuel Australia Ltd which has been trading as Macquarie Bank Ltd since 1985 (Carew, 2006). Interest rate ceilings on certain bank deposits were removed but some limits on minimum and maximum terms on fixed deposits remained. In 1982, banks were allowed to accept deposits in savings accounts of up to $100,000 from commercial organizations and business enterprises.

In addition to that the minimum term on bank fixed deposits was reduced from 30 to 14 days for amounts greater than $50,000, and from 3 months to 30 days for amounts less than $50,000. In 1983, the Australian dollar peg was removed and the currency was allowed to float. Most of the controls on foreign exchange market were also abolished.

In 1984, controls on bank deposits including minimum and maximum terms on deposits and the prohibition of interest on cheque accounts, were removed. It was an important year for Australian financial sector as it marked massive deregulation of financial markets, including controls on merchant bank ownership, stock exchanges and securities industry. In 1985, licenses were granted to 16 foreign banks (Australian Bankers Association Ltd. 2004).

The dividend imputation system took effect from mid-year 1987. Dividend imputation allows companies to attach franking credits, which are passed on to shareholders along with dividends, to dividends paid. Those credits represent company tax already paid, and for eligible shareholders, the distributed company profits are taxed just once (Wikipedia 2006).

In 1989, a scheme relating Australian Banking Industry in Ombudsman was established which was funded by the banking industry. Its major function was to deal with different specific complaints regarding the banking services like transactions, calculations, banking practice, service quality and incorrect information etc.

On May 23rd 1990 Treasurer Paul Keating announced the ‘six pillars’ policy to prohibit mergers of six major financial institutions in order to secure and maintain a competitive environment in the financial market.

In February 1992, the government allowed additional foreign banks to operate in Australia, and the option of branch banking status was made available. The first wave of foreign banks was restricted to subsidiaries so that they would be subject to Australian law and operate on the same footing as domestic banks. This move was motivated fundamentally by a desire to increase competition in the banking sector (Reserve Bank of Australia Bulletin, 1994). In 1998 the ‘six pillars policy’ of Keating was replaced by the ‘four pillars policy’ prohibiting mergers between the four major banks.

The Financial System Inquiry also called Wallis Inquiry was announced in 1996 chaired by Stan Wallis. This inquiry was commissioned because of the significant changes occurring in the Australian financial system. The inquiry’s Report documented the degree of change occurring in the financial sector and the challenges it posed to the regulatory structure. The report noted that the most direct and transparent benefit of an effective financial system is the reduction of costs to consumers. It also indicated that even a 10% improvement in efficiency in the financial sector would result in cost savings up to $4 billion per year (The Financial System Inquiry Secretariat 1997).

Presently there are 53 banks operating in Australia, which range in size from $0.17 billion to $270 billion. Due to a large scale deregulation initiated in 1980s there are no banks owned by the Australian government. The last remaining shares owned by state were sold in 2001.

High level of deregulation has also increased competition in the banking sector. The interest rates on loan dispersal are decreasing continuously and that on deposits is increasing. For example, the HSBC Bank Australia Ltd offers an extensive range of financial services through a network of 35 branches and offices. Recently it has offered a significantly high interest rate of 6.2% on saving deposits for every month the customer does not make a withdrawal. This service requires no bank fees, no minimum opening balance and 24 hour online access. (HSBC Bank Australia Ltd 2006)

The Australia and New Zealand Banking Group is offering a scheme called ANZ V2 Plus in which it is giving services like high interest rate on deposits of value $5000 and more along with access via ATM, ANZ Branches, Internet and Phone Banking. Also it allows the client to make 5 free withdrawals per month with no account servicing fee and free internet banking. (ANZ 2006)

In Australia, the banking system is well capitalized and highly profitable, with low bad debt levels both by historical and international experience. Yet there are a number of problems in the pricing of financial risk in the system, which include the persistence of low long term bond yields and reduced credit risk premium. This optimism is also presumably behind the willingness of some investors to purchase a variety of financial assets.

Though this situation promotes efficiency and risk sharing in the financial system, the willingness of market participants to price risk rest heavily on the assumption that the inflation and asset prices will be stable and experience suggests that when economic outcomes are consistently favorable over a run of years, investors tend to underestimate the risk. It would therefore not be surprising if there is at least some element of shortsightedness in financial markets (Financial Stability Review 2006).

In this paper the development of financial markets over the last 20 odd years has been analyzed and evaluated. From the massive deregulation of 1980s to a stable and creative environment of the 21st century, the financial markets of Australia has been through a major transformation in which the financial sector has become almost autonomous to the governing body. While increased competition has resulted in higher level of efficiency, it has also resulted in under estimation of risk. Such a situation might result in some future crisis, if the risk assessment is not conducted at regular basis or if it is ignored at all. 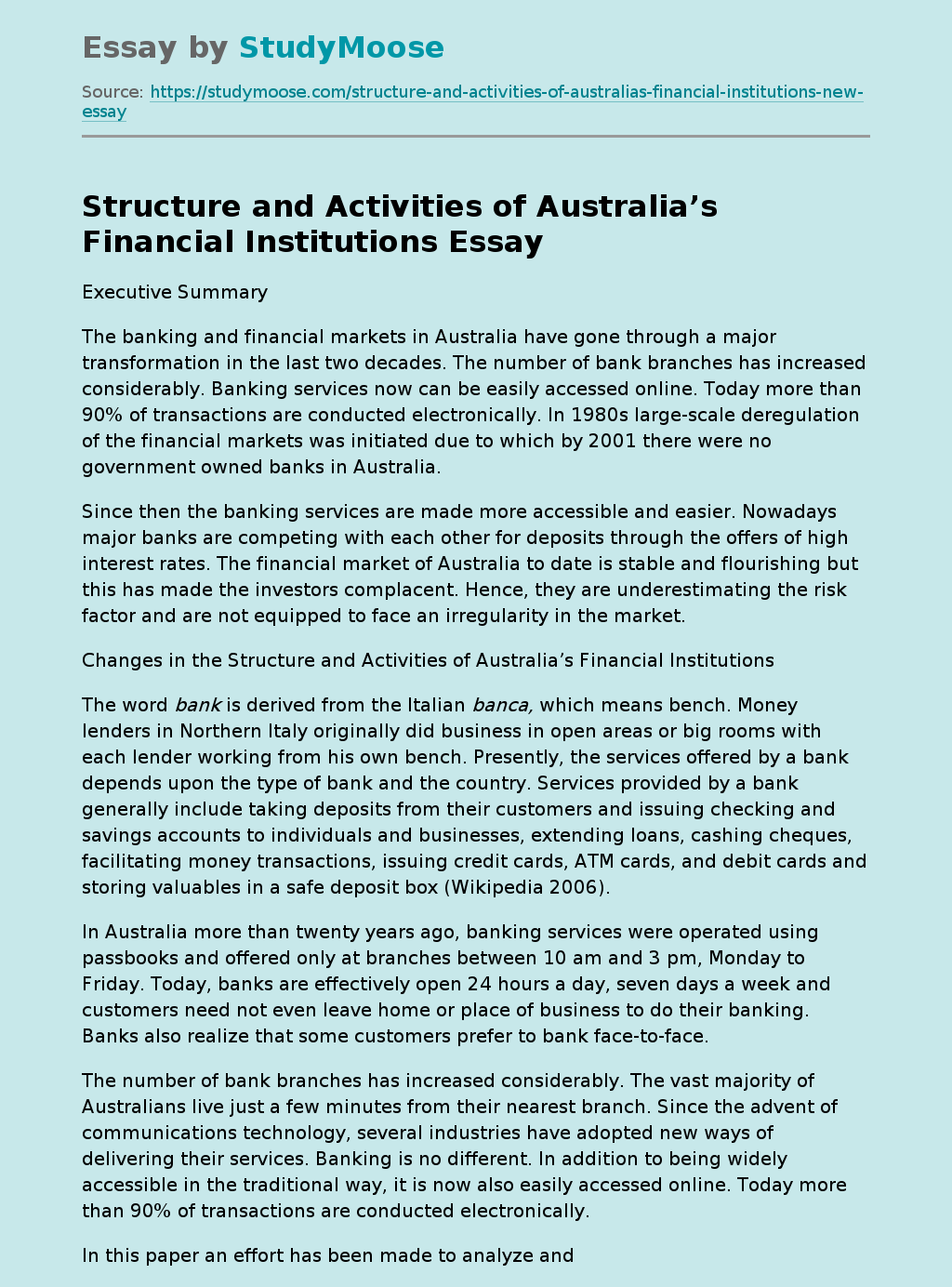