When discussing classical realism and structural realism, there is always a debate about what distinguishes the two. There are similarities between the two realisms but to really understand each, one must understand the differences. Mearsheimer uses a great phrase to differentiate the two realisms. Mearsheimer states, “For classical realist, power is an end in itself, for structural realists, power is a means to an end and the ultimate end is survival (Mearsheimer 2013: 78).

Classical Realism as Lebow states on page 61 is that “all politics is an expression of human drives and subject to the same pathologies.

Don't use plagiarized sources. Get your custom essay on
“ Structural Realism vs. Classical Realism ”
Get custom paper
NEW! smart matching with writer

” Classical realist focuses solely on the state and its source of power. Instead of looking at the big picture of the international system, classical realists care more about domestic stability and order. Structural realists on the other hand care little about why the states want power and focus more on international system and what forces these states to pursue power. Structural realism can be divided. There is the Defensive realist and the Offensive realist (Mearsheimer 2013: 78).

What Mearsheimer says about defensive realist is that states should not try to maximize their powers entirely because if they do the system today will discipline them if they try to gain too much power. An Offensive realist feels that it is a good idea for states to gain and access as much power as possible because with ensuring enough power, one will have a chance for their own survival. Classical realism compared to structural stress more on the similarities between domestic and international politics rather than the differences (Lebow 2013: 60).

With this type idea, we see classical realists stress more the ethical and stability of communities.

To me I feel that Structural Realism is an improvement upon Classical realism. The reason I say this is because in chapter 4, Mearsheimer really breaks down structural realism in a sense that we look at it in two different ways. We could look at it in the Defensive realist point of view or the offensive realist point of view. No matter which way we want to look at Structural realism, we cannot just have a major concern for power and who has it. Structural realism expands classical realism in the sense that not only is power a major concern but while we have this power, we must make sure that the powers cannot be taken away.

Classical realism still believes that power is the main concern but the stability with classical realism I feel may be an issue. If states only concern was gaining the power needed to become that hegemony power will they have the stability and order to maintain it? I feel that with Structural realism, there are more tactics that can be used in order to maintain the power seized by states without a concern of whether it will be taken or not.

Structural Realism vs. Classical Realism. (2016, May 04). Retrieved from https://studymoose.com/structural-realism-vs-classical-realism-essay 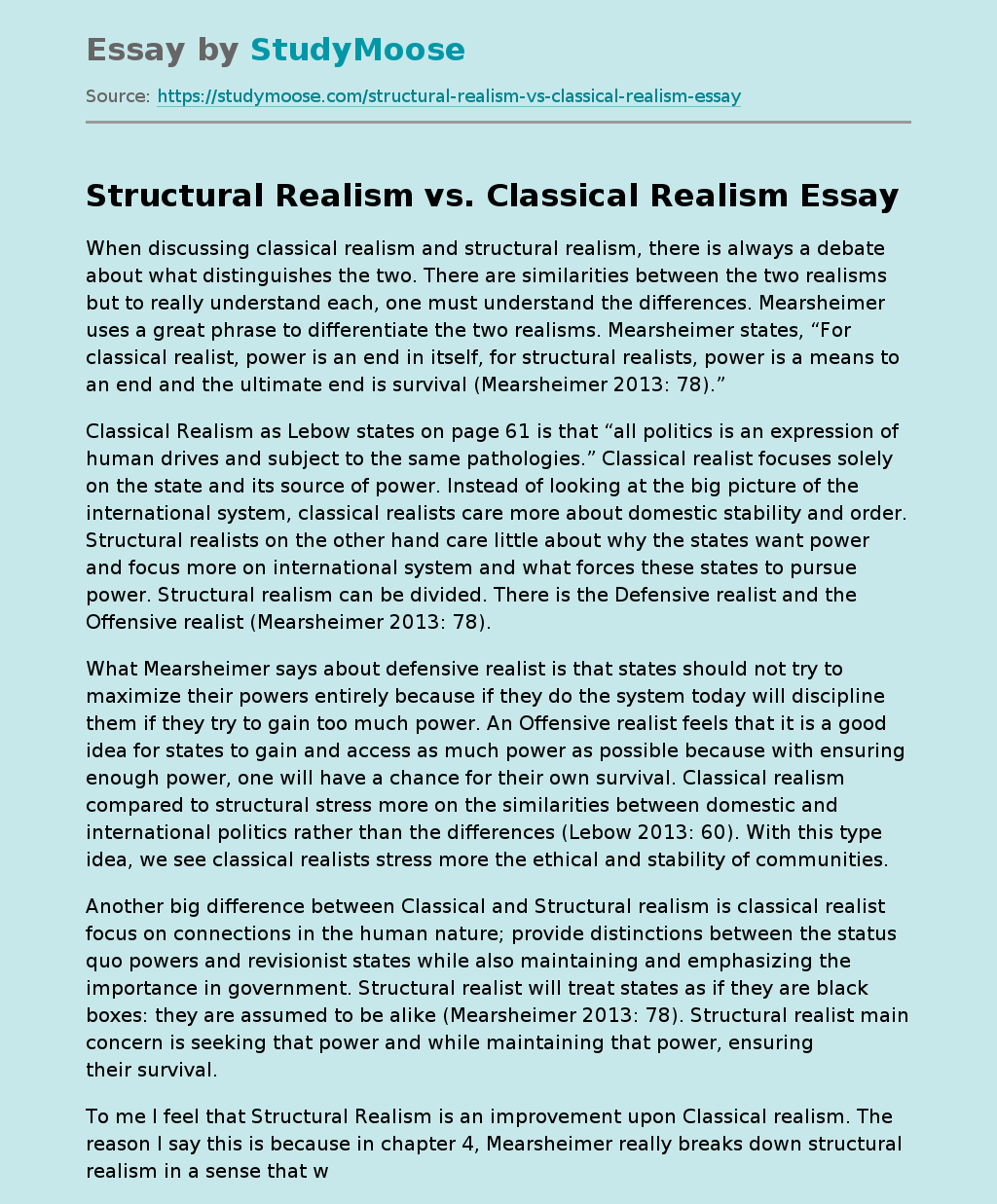