Structural firefighting can be very dangerous and can put the lives of firefighters in situations were their decision can end up being very detrimental. History has proven when the wrong choices were made, and lives and properties were lost. From past structural events the choice of choosing the wrong attack could end up being in the papers and going to funerals for firefighters. That’s why choosing the correct fire tactic is so important. Offensive versus defensive tactics need to be made by competent personnel early and evaluated often, to ensure safety and structural stability is still intact.

Turn in your highest-quality paper
Get a qualified writer to help you with
“ Fire Attack: Offensive vs. Defensive ”
Get high-quality paper
NEW! AI matching with writers

There are pros and cons for offensive and defensive attacks.

That is why command will have to continue sizing–up the situation periodically throughout the emergency to ensure there are no progressions in the fire. Safety is the most important aspect of choosing between offensive or defensive attacks. What it all boils down to is, is an offensive attack better than a defensive attack or vise versa? The need for both attack methods is vital.

There are times when one attack method is better than the other. Command or the first arriving engine has important decisions to make on which attack to do, hopefully they make the correct one for everybody’s safety and property.

An offensive attack is when “fire fighting operations make a direct attack on a fire for the purpose of control and extinguishment” (shackleford, 2009, p.104). The attack crew will enter a building with a charged hose line and get close to the seat of the fire to extinguish it.

“The most efficient use of water on free burning fires is made by a direct attack on the base of the fire with a solid stream or straight stream” (International Fire Service Training Association, 2002, p.525). The purpose of an offensive attack is for the rescue of trapped victims or a quick knock down of a fire to save the structure from further damage. That basically means the attack crew will take a direct approach to mitigate the fire. The offensive attack mode has a lot of concerns because it ultimately puts the crew in a dangerous situation.

When using an offensive attack you also should have a two man back-up team and also a two man RIT team, which will take more man power. Personally as a firefighter most offensive attacks we do are on house fires, and with the house being so smoked up it gets extremely hard to maneuver your way around. Victim’s houses that firefighters have never been in and have no idea of the house layout, firefighters can become disoriented and confused and lose their bearings. Inexperienced firefighters can also disturb the thermal balance of the room. Coordination between all the units on-scene have to be worked out correctly to make an offensive attack successful. From the initial attack crew down to ventilation operations has to be worked out to perfection. “More lives are saved by putting the fire out as swiftly as possible, while rapid locations, confinement and extinguishment of the fire depends on proper hose selection and placement” (White , 2006).

The goal of a defensive attack is to make sure the incident doesn’t worsen. Crews will also fight defensively when a building has become fully developed and they will want to protect exposures. Switching to a defensive attack means the building will probably be lost, and the only option is to go to a safer means of extinguishment. Crews will have to position the apparatus a safe distance away, and deploy a supply line to surround and drown the building and exposures. Coordination has to be very precise in the set-up of the apparatus and exposure crews to make the emergency work out correctly. Communication has to be accurate and detailed, so the command knows what exactly is happening around them. Building owners or occupants may not like this approach, but when the safety of the firefighters come into play, command has no choice but to protect their men or women on-scene.

Another area of great concern is when command decides to switch from an offensive attack to a defensive attack. “The transitional period is the critical point of shifting from the offensive mode to the defensive mode or from the defensive mode to the offensive mode”(shackleford, 2009, p.104). One of the main concerns with this mode is that you are in a transition of switching in between two modes, and you could accidently leave emergency personnel without a back-up team or start a defensive attack when crews are still inside. Communication has to be made to all the crew on-scene to make sure all are aware of what’s happening. If this isn’t done appropriately lives will be in danger. A personnel accountability check should be made on numerous occasions so command will know where all of their firefighters are located. When choosing between an offensive or defensive attack, crews need to be properly trained in the correct methods of extinguishing the fire.

The training division and the assisted chiefs have the responsibility to make sure the firefighters that fall under their command know what they are doing. The competency of each individual is very important for the mission to be accomplished. Fire departments should have their own standard operating procedures to follow when doing an offensive or defensive attack. Any type of negligence should be avoided at all cost. If fire departments do not meet the NFPA standards for the proper way of doing these attack methods, they could be held liable and could go to jail or lose there jobs. On June 18, 2007 in Charleston, South Carolina nine firefighters died in the line of duty, many more were injured. Several factors were contributed to the results of that fatal fire. “The fire began in trash outside the loading dock and spread into the enclosed loading dock.

The fire spread quickly within the loading dock and moved into both the retail showroom and warehouse spaces”(The National Institute of Standards and Technology, 2010). Fire crews responded with an offensive attack to try to extinguish the fire. Then the unimaginable happened, and the fire spread too quickly from improper ventilation and the roof collapsed on top of them. If command knew the circumstances of the structure, they never would have gone with an offensive attack. This is just an example of why command needs to know what they are putting their fire crews into. A defensive attack would have been the proper method to put out that fire. Many lives would have been saved if they went with a defensive attack. This is just a horrible incident and it could have been prevented if many of the recommendations were done before this incident ever happened. On a summer day in June of 2010, the fire department that I work for responded to a structural fire at a house with a kitchen fire.

The first in engine started with an offensive attack. But after a couple minutes of trying to extinguish the fire the room flashed on them. The incident commander pulled the crews from the interior of the building and began doing a defensive attack. In switching the attack method we lost the building but we protected the surrounding exposures. This is just an example of what can happen in a fire and having to change their attack methods. Structural fires can be very unpredictable, and methods will have to be changed. Neither method was incorrect, but when things get too dangerous you have to err on the side of safety. From past experiences, future fire department operations should learn from those horrible emergencies. Offensive and defensive attack methods have their purpose in the fire department. Command needs to know beforehand what they are sending their crews into. There is a time and place for both types of attacks. Fire departments should have their firefighters trained to recognize when the building is appropriate to do an offensive attack or defensive attack.

Safety of the crews is the most important aspect on all structural fires. Offensive attacks should only be done if a live victim is trapped in the structure or the building is save enough for crews to enter. If the structure is not safe for crews to enter they should always go with a defensive attack or go with no attack method. Both methods are essential in the fire service, and will be for a long time. Hopefully the people in charge know what they are doing and in the process they can save people’s lives and their properties. One attack method is not better than the other if they are used correctly and our jobs will be better for it, if all firefighters know what they are looking for. 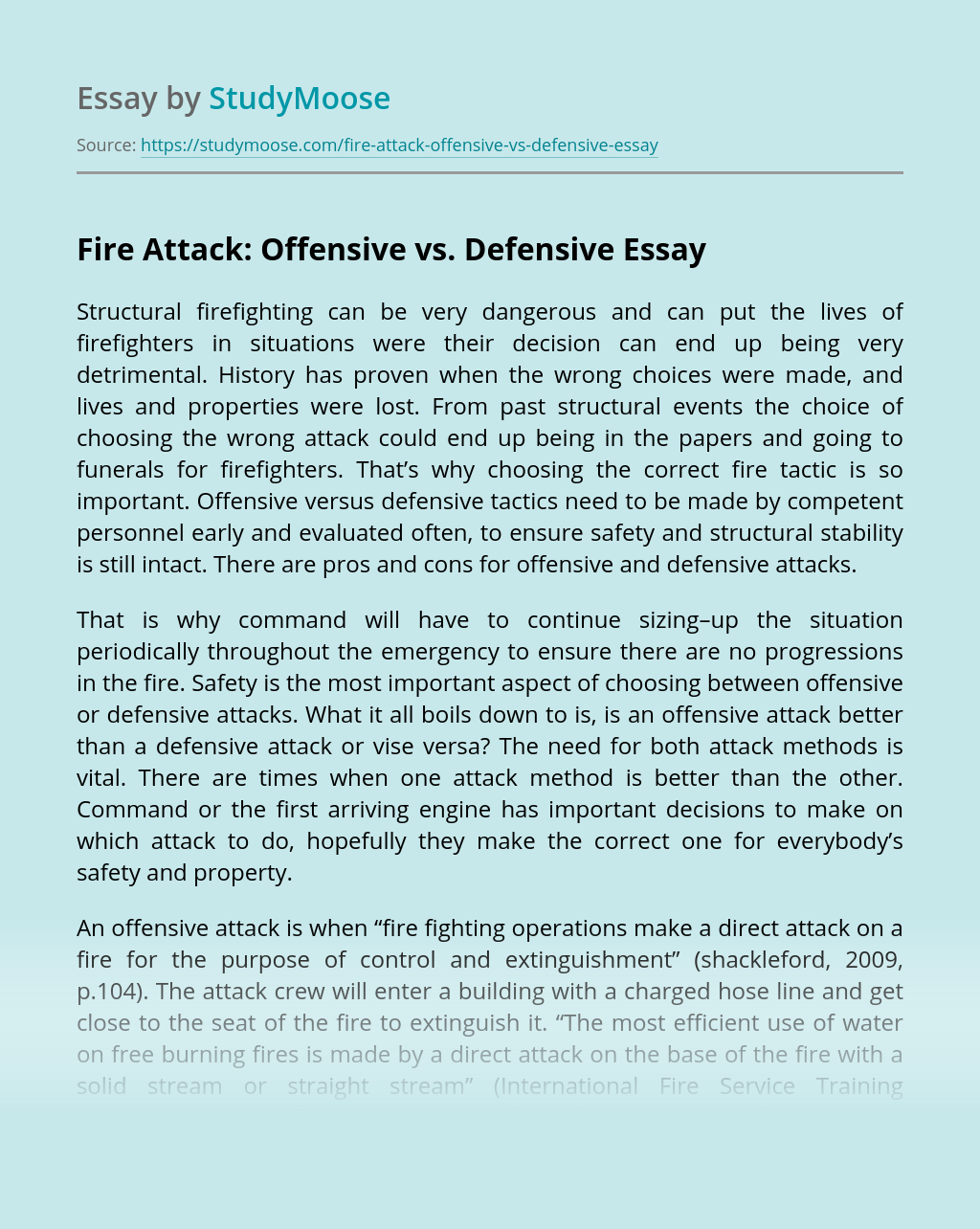 Turn in your highest-quality paper
Get a qualified writer to help you with
“ Fire Attack: Offensive vs. Defensive ”
Get high-quality paper
Helping students since 2015
Stay Safe, Stay Original