Soundtrack to My Life

Picking two songs that would best fit on the “soundtrack to my life” was in a way surprising to me. Only one of these two songs would appear on my “favorites” list, and yet, in some way, they both have become a part of me. Since the dawn of time, songs have been taken to heart by their listeners. Each song, with its own initial meaning, has been loved by someone and loved again, but for absolutely different reasons, by the person sitting right next to them listening to the same song.

Turn in your highest-quality paper
Get a qualified writer to help you with
“ Soundtrack to My Life ”
Get high-quality paper
NEW! AI matching with writers

Every song you hear is an event; some will be rapidly rising crescendos during the pinnacle moments of your life, while others will be nothing more than simple background noise. Yet they are all threads in the tapestry that we like to call life.

Bono, The Edge, Adam Clayton, and Larry Mullen, collectively known as the rock band U2 are one of the most influential bands in rock history.

U2 came out from Dublin, Ireland with their 1980 debut album, Boy. The following years saw the release of October, War and The Unforgettable Fire, but the band’s achievement of superstardom in the United States was not realized until the release of their influential album, The Joshua Tree, which was made public in 1987. The hit record contained numerous hit singles, including “Where the Streets Have No Name”, “I Still Haven’t Found What I’m Looking For” and one of my personal favorites and lead single off of the album, “With or Without You.

My favorite song, “Without or Without You” starts out with several bars of drum beats and the placid melodic tones of a synthesizer before that distinctively driving and instantly recognizable bass line kicks in. While the song cycles through the chord changes for the first times, the clean notes of an electric guitar with a delay effect, the typical “Edge” sound that we here on almost every U2 song swirls around our ears, placed above the mix of the synthesizer, enticing us and intriguing us further into the song. Bono enters, smoothly and tranquilly sings a few bars, “See the stone set in your eyes, see the thorn twist in your side, I wait, for you…” For me, this is the most thrilling part of the song, the lull before the storm to come when the song really starts to cook.

Bass beats, guitar and Bono’s soft delivery combine to produce a powerful feeling, one that makes you feel as if you are taking part in something that is larger than life itself. Then, a short-lived intimation of the chorus, followed by an additional short verse and chorus, and then the drums grow more aggressive, more driven. It seems as if Bono has been freed from the chains that bind him, and his soft, measured delivery is replaced by a melancholic wail. The way that Bono expresses himself throughout the song is so real, so full of emotion that you can’t help being drawn into the song. The wave of sound that has building since you turned the song on now starts to reach its pinnacle as the vocal part rockets skyward. “Nothing to win and nothing left to lose, and you give yourself away… with or without you.”With those words, we are instantly off on our musical journey through time and space; the song has placed a vision in our heads.

The sun has been setting earlier previous day; the temperature dropping a degree or two everyday. One night you decide to take a walk through the outdoors and you see that the sky is almost completely dark, the air crisp and clean, the celestial lights glimmering in the clear night air. A powerful feeling of yearning overtakes you out of nowhere, a feeling that is so out of character for those humid nights of the summer season, or of the seemingly continuous deep freeze of the wintry weather. No, the feeling is simply inappropriate to any other season or instance except for this one; right here, right now. You want to suck in that air so deep, look sincerely into someone’s eyes and fall in love.

This song is one of the most evocative songs I’ve ever listened to. The message that I attach to this song is somewhat simple. Maybe it is just because I have been in exactly the same situation myself, and I can empathize with the lyrics, but the hopelessness of his situation is depicted with the great contradictions. You give it all, but you want more. Nothing to win, yet nothing left to lose. The basic problem depicted in the song is that being with a girl is too hard to tolerate because you want her so much, while being away from her is too much for the same reason. “On a bed of nails she makes me wait…You give it all but I want more.” He is showing his mixed feelings. He is angry that she is letting him stay in this situation, yet he knows that she is doing all she can. This song is the story of my life.

Another song that has always resonated with my life, as short as it has been, is the song “Kiss by a Rose” performed by the R&B artist Seal. It is a song that I just cannot escape from no matter how much I try. The song is a part of me, and likewise, I am a part of it. Listening to the music of Seal without hearing a message is like watching a movie with the sound turned down. It’s style over substance, the container over the content. The song’s inquisitive 3/4 time signature, also known as waltz time, is quite unconventional for a “pop” song. The one-of-a-kind mixture of prolific harmonies and larger-than-life sound proportions, allows “Kiss from a Rose” to expound a very distinctive sound and stand out from other songs in the genre of “pop”. The song may be awkward in assembly, but it is elegant in delivery. It is one of those songs that just simply resonates with your soul and uses some luminous “images” to do just that.

The images that this song pushes upon me are those having to do with the pursuit pure love (think along the lines of Beauty and the Beast, if you will), and the song tells a story similar to that. “There used to be a graying tower alone on the sea” means he used to be lonely and unhappy, had given up hope. “You became the light on the dark side of me”; she has brought happiness to his sad, miserable life and the love she has given him gives a natural high. The title lyric line, “I compare you to a kiss from a rose on the gray” is comparing the kiss, an expression of love, to the love of his life which “the rose” refers to. She has brought the love that he needs to end his sadness and despair.

“Baby to me your like a growing addiction that I can’t deny, wont you tell me is that healthy baby” He keeps falling more and more in love with the girl every day; ultimately becoming addicted to her to the point that it becomes almost like an obsession. He’s captivated by her and cannot stand to give her up; just like a drug addict needs more and more drugs to achieve their fulfillment.

The song starts out with a slow, soulful scat-like vocal solo that sets the beat driving for the entire masterpiece; repeating, this time echoed by a smooth tones of a woodwind instruments mirroring the vocals. Acoustic guitar, jazz drums, and the silky voice of Seal melt together to form the first verse of the song; slowly gaining emotional strength as the song reaches the chorus. Enter the chorus; cue the piano, the chorus erupts into ears like a volcano, but as quickly as it starts, it is over and we are back to the vocal solo, this time accompanied by a mandolin and guitar duo. The next verse starts with a Mozart-like mixture of violins and piano. Following an additional magnificent build up of emotion, the song kicks into another vocal solo with the beat of a bass drum mimicking a heart beat. The chorus is repeated and the instruments slowly fade out of existence to leave your ears with the sounds that they were first introduced to at the beginning of the song, the echoing sounds of Seals voice.

When I was younger, I just simply enjoyed this song for its mysterious, theatrical tone, but something happened to me that made this song a diamond in the rough and take on a whole new meaning that still rings with me today. I was going through a severe downward spiral depression after losing a close friend of mine several years ago, when I came across this song on the Batman: Forever soundtrack that I had purchased when I was in fifth grade and this one song on the album lifted me back up to my secure self again and because of that very reason, this song has and always will have a special place in my heart for as long as I live. The lyrics to “Kiss from A Rose” lifted me out of the dark depression that I went through following the loss that the song is totally meaningful and even before all this happened the song was a very beautiful song to listen to. The fact that this song became one of the biggest singles of all time is one of the rare moments when a truly great and meaningful song got the praise that it deserved even though it is not even one of my favorite songs.

The true message of the song that I take away from listening to this song is to keep on keeping on even when times are at their worst, because life is beautiful in and of itself! This is some of the most heartfelt, inspirational singing I’ve ever heard and its damn near impossible to feel down after listening to such an uplifting song as this. Seal is unquestionably one of the most talented musicians in R&B, and shows that by putting out a song like this that has a strong message, warm and inspirational lyrics and a whole lot of emotion.

Soundtrack to My Life. (2016, Jul 06). Retrieved from http://studymoose.com/soundtrack-to-my-life-essay 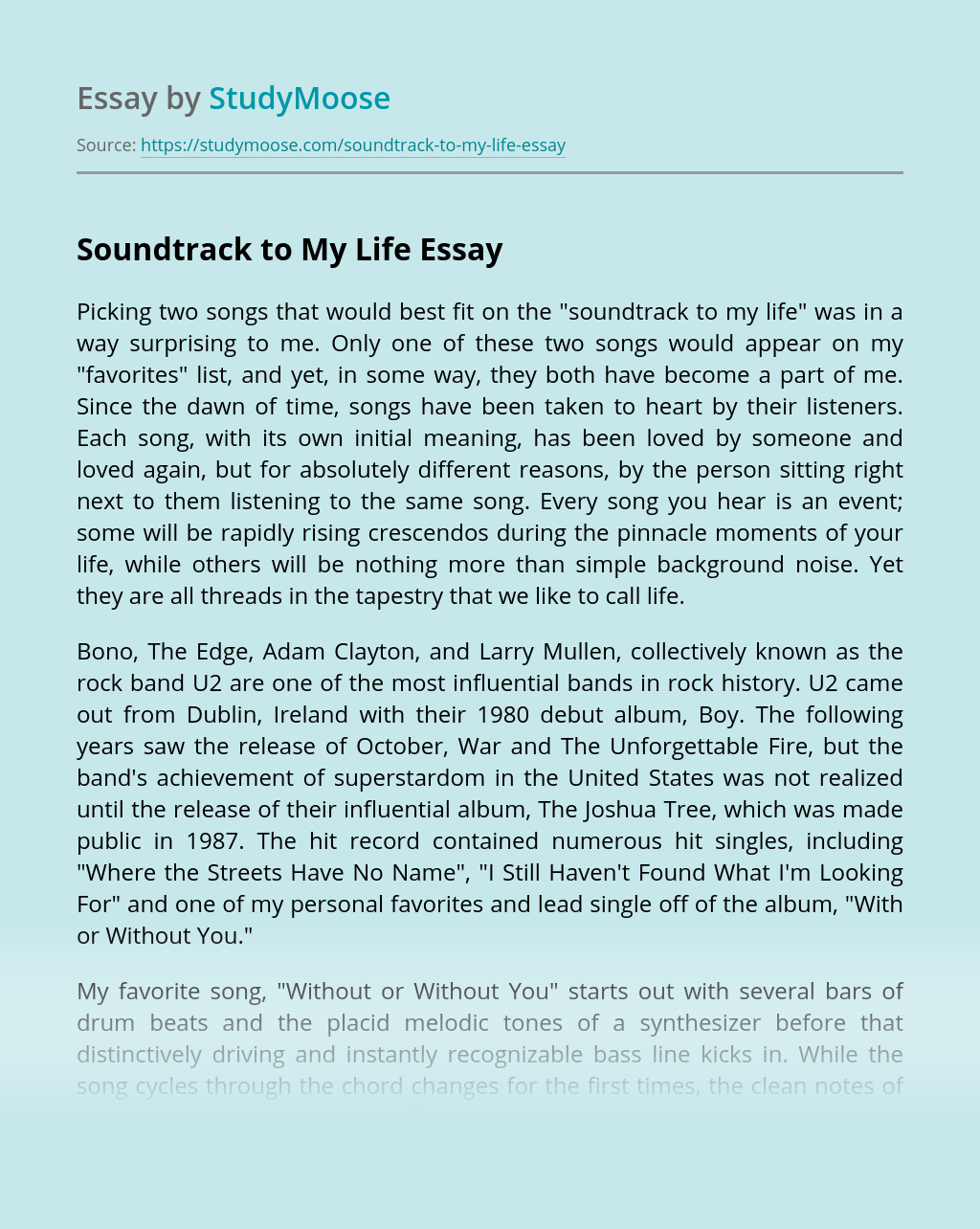 Turn in your highest-quality paper
Get a qualified writer to help you with
“ Soundtrack to My Life ”
Get high-quality paper
Helping students since 2015
Stay Safe, Stay Original