The UF Jazz Band Concert was an energetic, exciting and very entertaining. The University Auditorium provided a great atmosphere and vibe for the concert. From the start of the concert, it was very obvious how passionate all of the musicians and the director were about their performances. The band consists of five saxophone players, four trumpet players, five trombone players, and a rhythm section with guitar, piano, drums, and bass players. On saxophone were John Milado, Dustin Ferguson, Ben Greer, Monica Bello and Gregory Snider.

Don't use plagiarized sources. Get your custom essay on
“ Jazz Concert Report ”
Get custom paper
NEW! smart matching with writer

On the trumpets were Sean Bokinsky, Mark Kindy, Anthony Bobo and Bobby Polidan.

Jean Hickman directed the choir, which consisted of eight singers. The jazz concert started off with Lincoln Antonio playing a piano solo.

It was a great way to get the audience in the mood for a jazz music. The piano solo was beautifully soothing and played so well. Lincoln Antonio did not play the piano for the entire duration of the concert, as he switched in and out with two other piano players, Mitchell Morlock and Jason Bontrager. The first song that the jazz band performed together was “Needing You”.

Scott Wilson, the director, composed this song himself. The song tells about his journey to his wife and what they have been through together. He explained that he worked back and forth in another country, so their relationship wasn’t the easiest path to follow.

The song itself was a beautiful piece that had soft parts, as well as fast paced parts. This song featured Kevin Hicks on the trombone. The second song performed by the jazz band was “Slow Heat” by Neil Slater. In this song, Ben Greer had an amazing saxophone solo. The song really lives up to its name, as it starts out very somber and slow. This song was very intimate and was probably one of my favorites performed throughout the concert. I liked how the song begins, and then the saxophone takes over and leads throughout the song. “Just Friends” by Rob McConnell was performed next.

This song was an upbeat song with lots of trumpet playing in the middle of the song. The piano and drums carried the song throughout. “Softly as in a Morning Sunrise” by Sigmund Romberg was a very enjoyable song was a nice song to follow up “Just Friends”. It was a smooth jazz song. “Without a Song” by Youmans was an upbeat, somber song. It incorporated a nice even tone among all of the instruments. The soft humming of the saxophone sounded very nice with this piece. The beat of the piano carried the song and made it a very cheerful song.

The UF Jazz Choir performed “The Look of Love” by Zegree and “It Don’t Mean a Thing if it Ain’t Got That Swing” by Edenroth. “It Don’t Mean a Thing if it Ain’t Got That Swing” had a lot of scatting in it and was really fast paced. The jazz choir did a great job of using each other to compile a nice tone throughout both songs. The first song was performed completely a cappella and the second song was accompanied by a little piano in the background. After the choir performed, the jazz band played “Magic Flea” by Sammy Nestico and “Sing Sing Sing” by Louis Prima. Magic Flea” started out at a really fast pace with all of the instruments being played at once. The show ended with “Sing Sing Sing”, which is a great jazz classic. This grabbed the audience and really pulled them in for the end of the show. The jazz band members were all so incredibly into their music and instruments as they played. The passion they exuberated was phenomenal. As a college jazz band, they seemed at a much higher level than what most would think. Overall, it was an excellent experience and I was so happy to be apart of it. 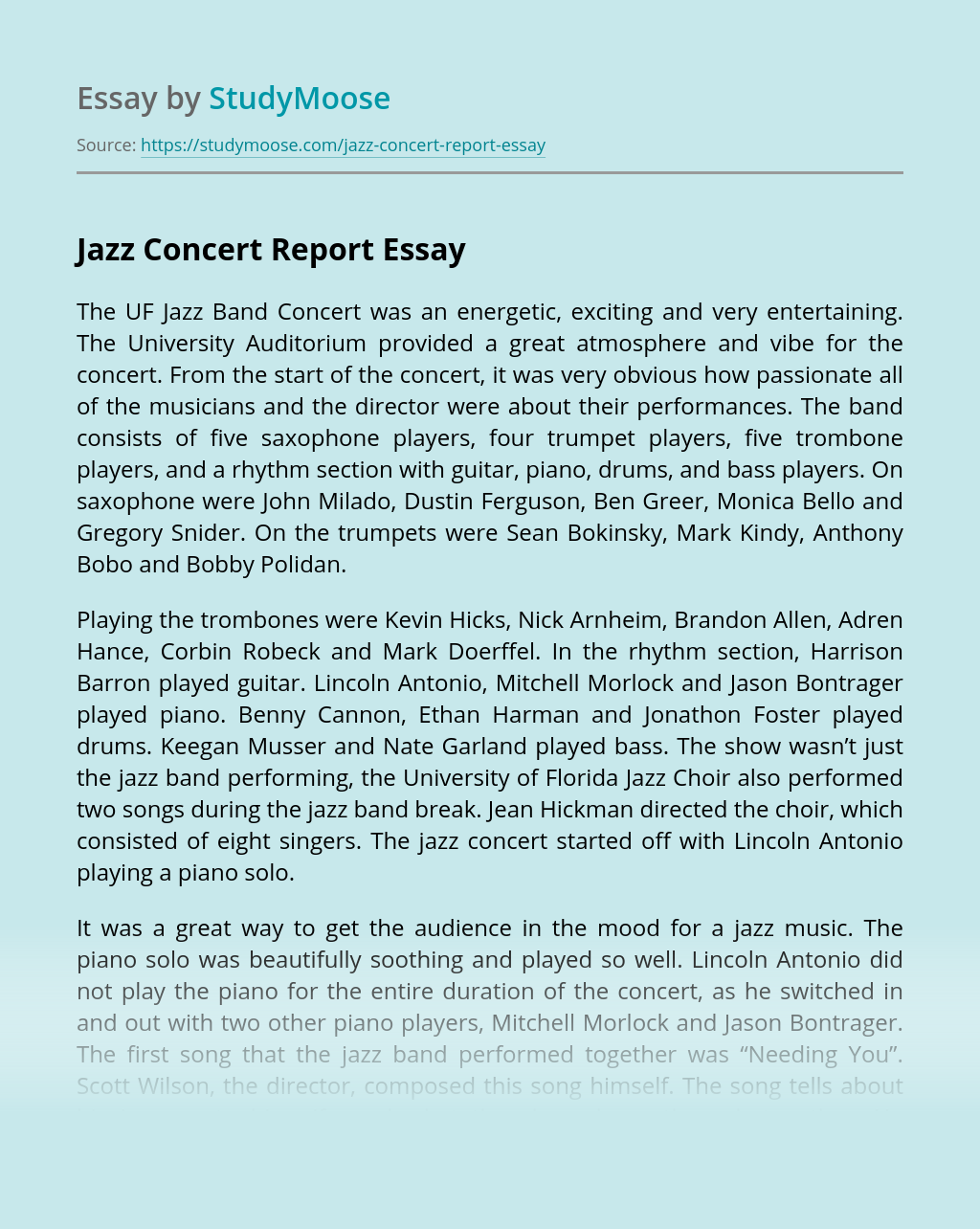