In the short story called SOLDIER’S HOME, by Nobel Prize winning author Ernest Hemingway, the main character Krebs has just returned from World War One in Europe. This is the perennial story of the hero leaving on some quest, only to return home finding everything different. Therefore, identity conflict holds the key to this story. Hemingway shows us how the hero must move on as there apparently is no such thing as a soldier’s home.

Harold Krebs returns from World War I having lost everything.

Don't use plagiarized sources. Get your custom essay on
“ “Soldier’s Home” by Ernest Hemingway ”
Get custom paper
NEW! smart matching with writer

His home town immediately impresses its demand for conformity upon Harold’s arrival. The people of the town find it odd that he should return so much later than the other men, which begins to show the conflict between Harold and the views of the local community. Hemingway paints a dark picture of how society demands that all participants fall in line with mainstream ideals.

Why should Harold be so late in returning home? Why could he not be like the other men, and arrive with them? It is as if they believe he is out to make trouble.

It lends to the idea that Hemingway himself was an outsider, and that he saw himself as an interloper in his rural home town. Krebs arrives home too late for the heroes welcome, and instead finds a society interested only in lies not the realities of war. These lies are acceptable, because they allow Krebs to fit neatly into society’s expectations of him and others.

In a so called love-thy-neighbor, Christian, all-American environment there is no room for an individual like Krebs.

As a matter of fact, many people have the opinion of America as a free country where there is room for versatility. However, I believe the fewest are aware of how our hidden double standards affect the society we live in, in America or any other country in the world.

The story takes place in an all-American Methodist community in Kansas. Hemingway might be accentuating the importance of religion in the Methodist community, by using a word such as apocryphal on page 1 line 31 (referring to Christianity) to explain what one might call urban legends familiar to all soldiers. Hemingway contrasts the setting through two pictures. In one picture he describes Krebs and his fraternity brothers from a Methodist college as very uniform in their appearance. The other picture, however, illustrates a situation where Krebs is seen with another corporal and two German girls. The neatness of detail in the former picture is not present in this one.

Krebs and the other corporal seem like two young immature kids who are suddenly put in a severe and relentless war where they are forced to grow up way too fast. Nothing is right in the picture; the girls are not beautiful and the notable river is not even shown. The picture is wrong as war itself. There is no indication of war-time romance. Hemingway works a lot with the environment physically and mentally, above and beneath the surface. A picture might be beautiful for the bare eye to see, but the characters contained in the picture might not necessarily be placed in a pleasant situation (and the other way around).

As Krebs returns to the flawless environment of Kansas in 1919, he experiences how his homecoming is far too late. Krebs enlisted but the men who had been drafted received all the glory because they came back before him. Krebs volunteered and served his country for a longer time than the other men, but there was a limit for how long time the community could celebrate the homecoming veterans for their patriotism and partisanship. Krebs needed to be heard because of all the atrocities he had seen, but nobody wanted to listen. This is the part of the text where Hemingway is implicating Krebs’s inner devotion for killing; “the only thing for a man to do, easily and naturally”.

These lines are particularly relevant because they point at Krebs’s inner emotions; or rather lack thereof. Krebs has become a fighter; a killer. However, these qualities do not fit into his hometown in Kansas. The narrator does not communicate Krebs’s inner feelings to the reader. In this way the narrator alludes to us as readers are not in Krebs’s confidence; as is nobody. When the mother confronts him at gunpoint, he cannot communicate at all, because of them not being on the same wavelength. And the mere fact that she mentions Charlie Simmons as someone who is settling in and becoming a credit to the community, she is setting the standards of what is considered normal, implying that Krebs does not meet these standards. At a loss for words he can only watch the bacon fat hardening on his plate(page 5, line 22).

Hemingway emphasizes this by giving this line its own paragraph. On top of that, the mother claims to know what goes on in a soldier’s mind by saying: “I know the temptations you must have been exposed to… I know what your own dear grandfather, my own father, told us about the Civil War…” on page 5 line 17-20. He cannot find comfort in a society based on the values of his mother and father, only his unspoiled little sister can he communicate with, without being met by demands of civilization. Therefore Krebs has to move on. The timeless significance of this story shows us how we do not, or cannot, make room for our returning heroes. This continuing problem is also seen in other literature such as The Lord of the Rings where Frodo Baggins finds no rest upon returning to The Shire after having saved Middleearth, but must continue to the Grey Havens. Whether Krebs finds peace in Kansas City, or whether he has to continue on an endless journey in the search for peace of mind, is hard to tell. But this is the question Hemingway leaves us to work out for ourselves. 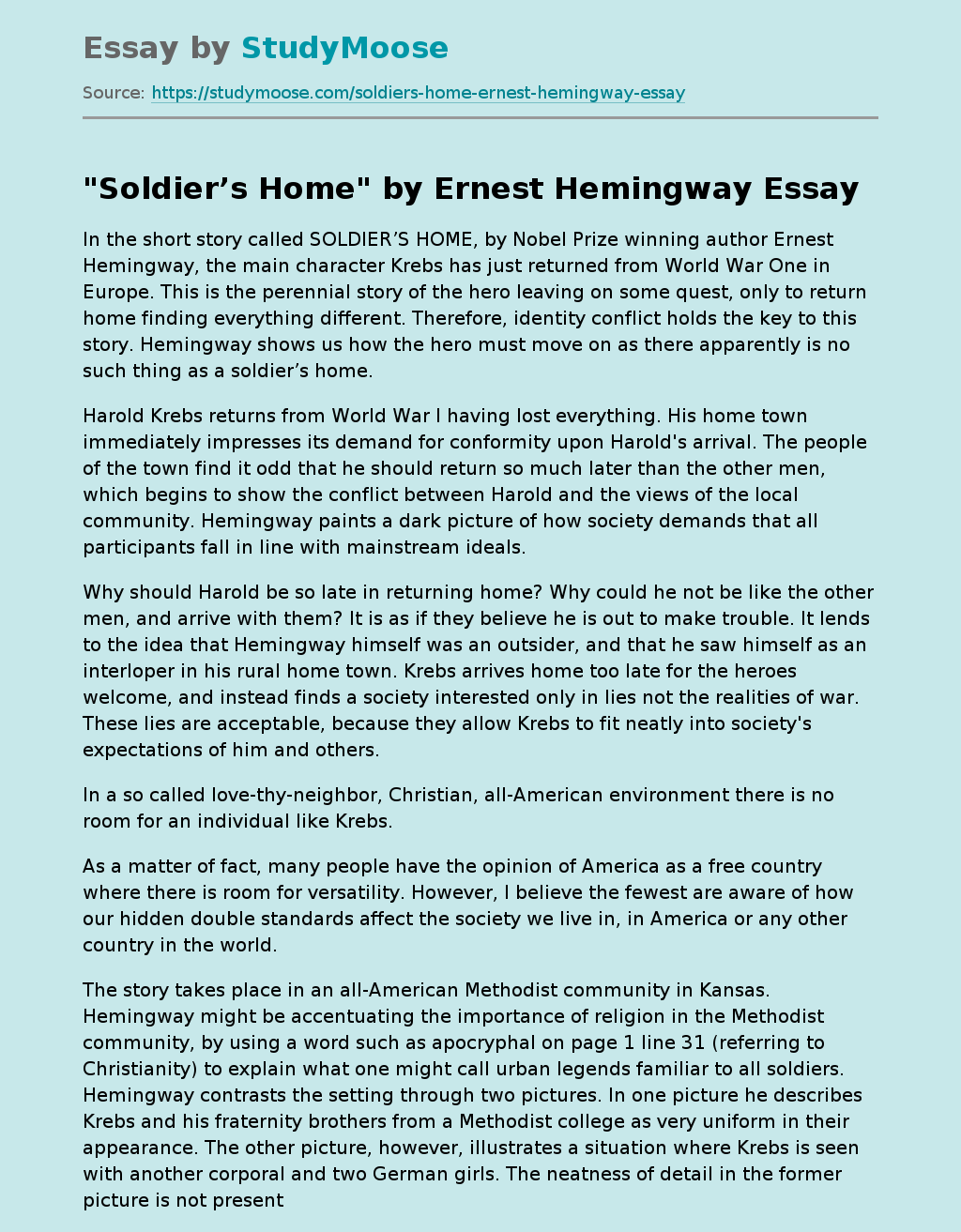