Which is the more viable energy source for Australia’s energy and needs, Wind or Solar? This is a common debatable topic within the Federal Government of Australia. Debating which specific form of energy should be invested heavily in, in hope that carbon emissions and the use of coal will be reduced in the future (Clean Line, 2013). It is believed that the dominance of coal will be challenged by renewable energy e. g. Wind and Solar. Renewable energy is fast, clean, affordable, efficient, reliable and ultimately infinite in that both Wind and Solar are an endless effective energy source.

Don't use plagiarized sources. Get your custom essay on
“ Solar Energy and Wind Energy ”
Get custom paper
NEW! smart matching with writer

This form of energy releases no carbon emissions thus resulting in a cleaner environment, that also helps create jobs and stimulate local economies (Clean Line, 2013). Throughout this investigation the social and environmental relevance in relation to geology will be highlighted as well as which Alternative Energy of Wind and Solar will be a more viable option to be heavily invested in as well as relating it to ‘Australia’s energy consumption and/or needs’.

Specifically for this investigation we will be determine both advantages and disadvantages of Solar Panels and Wind Turbines these are the most popular resource and infrastructure that relate to Wind and Solar energy. This process will decrease the possibility of biasness throughout this investigation. Wind energy is an example of a cost-effective ‘Alternative energy’ with potential to compete with other energy sources of coal, gas and nuclear power ultimately being a more efficient and viable option where no carbon emission will be released into the environment.

Our current wind resources and infrastructure is the result of the vast improvement and growth of technology in our current generation (Clean Line, 2013). These resources can be seen in South Australia where almost half of the nation’s Wind Power capacity is created. The most effective South Australian wind farms in terms of capacity (MW) are located in Lake Bonney and Hallet. (Pitteloud J, 2010) State / Wind Energy is a type of Alternative energy that has been used for long time. Wind Turbines is the most effective form infrastructure to produce ‘wind energy’, they are commonly used to generate electricity.

A wind turbine is made up of three blades called a rotor. As Wind helps the rotor spin, power is then sent to the generator, where wind stored where the power is turned into energy (Thomas R 2009). This process is called ‘kinetic energy’ where the power is converted into electricity; a transformer is the next step in the sequence of creating sufficient electricity, the purpose of a transformer is to increase the electrical voltage so electricity created can be sold to electricity companies which are distributed to homes.

Cost-effective. Does not require water for cooling. Protects consumers against instability of the price of Fossil Fuels. Reliable, Affordable and Clean. Highest production at night Disadvantages: The appearance of the turbines spoil the natural environment Wind turbines make noise. Have been found to kill birds that fly into them. One wind turbine can only generate enough electricity for one household Lengthy process of installation Expensive Maintenance

Overall, Wind energy in forms of ‘Wind turbines’ have numerous benefits despite a few disadvantages. However the bigger picture needs to be taken into consideration as in the long term wind energy will be a source of energy that will ultimately be infinite as wind will never run out. Wind turbines will provide a larger flexibility when compared to carbon emissions and the use of coal. This is as it is cost-effective, reliable and clean as lesser fossil fuels will be released into the environment (Energy Matters 2009).

This proves the conjecture that Alternative Energy in the form Wind energy is an efficient and viable option that has social and environmental relevance in geology thus highlighting the relationship it has with ‘Australia’s Energy Consumption’. Despite being an Alternative Energy that is cost effective, reliable and clean, their arch rivals Solar Energy is an energy source that has only been recently established in social lives and homes in the past decade. Solar Energy is also a form of Alternative energy that is similar to Wind Energy in that it is cost effective, reliable, clean and infinite.

Solar Energy is produced by two different types of Solar, these including Concentrated Solar and Photovoltaic Solar. Concentrated Solar uses mirrors to reflect sunlight to collect and convert into heat, as Photovoltaic Solar uses Photovoltaic cells (PV) where the cells are used as a conductor to convert the sunlight to electricity (Clean Line, 2013). The most common resource used upon households to generate electricity is a ‘Solar Panel’. The early days of production saw Solar Panels to be expensive upon the market; however improvement of technology has seen the prices of Solar Panels plummet.

(Energy Australia, 2013) A Solar Panel system can help you save money, and reduce your greenhouse gas emission ultimately being a more efficient and viable option where no carbon emissions will be released into the environment. Although the price of a ‘Solar Panel System’ is falling, the price is still reasonably expensive for the average Australian household. However in the long term this could be a beneficial solution to decrease greenhouse gasses (Energy Australia, 2013).

Federal governments also promote the action of buying a Solar Panel System where governments offer special enticements to support the use of ‘Alternative Energy’ for Australia’s Energy Consumption. Thus highlighting the environmental relevance Solar Energy can have a beneficial impact in our day to day lives, reducing the burning of coal which results in a cleaner less polluted society (Power Source Solar, 2008)

(Energy Australia, 2013) A Solar Panel System uses the same process of Photovoltaic Solar where Photovoltaic cells covert sunlight into electricity to power electrical appliances in your home. This process starts with the Sun which is free and available for everyone and as sunlight falls on to the cells the suns energy is then converted into Direct Current (DC) power (Energy Australia, 2013). The only exception is that at night, solar panels generate significantly less amount as there is no sunlight.

Protects consumers against instability of the price of Fossil Fuels. Reliable and Clean. Federal Government enticements Minimal maintenance Disadvantages: Solar Energy is most effective when it is sunny. Expensive to a degree Unreliable climate means it may be an unreliable source of energy. Cost of installation A single panel doesn’t produce much electricity Adequate additional energy if a long period of rain. Takes up a large area of roofs. Solar panels degrade with time. Solar Panels can become out-dated quickly

There are many advantages and disadvantages to Solar Energy in the form Solar Panels. Solar energy is an efficient and viable option as in the long term it will be beneficial solution to decrease greenhouses gases as well as challenge the dominance of coal. Solar energy is a more efficient, cost-effective, reliable and cleaner option thus highlighting the social and environmental relevance in geology and the relationship it has with ‘Australia’s Energy Consumption’. (Ryan V, 2009) Conclusion:

Wind or Solar? As mentioned there are both positives and negatives for each source however there is no doubt that these sources of ‘Renewable energy’ are faster, cleaner, efficient and ultimately infinite. The Federal Government of Australia are debating which form of energy should be heavily invested in. However either way Wind or Solar is a more viable option as no carbon emissions are released into the environment hence showing the relevance and relation these Renewable energy has on the socially and environmentally.

If you commit and join Wind or Solar power you won’t only just be saving money of the electricity bill but joining Australia’s energy revolution which will be a beneficial option in the long term. 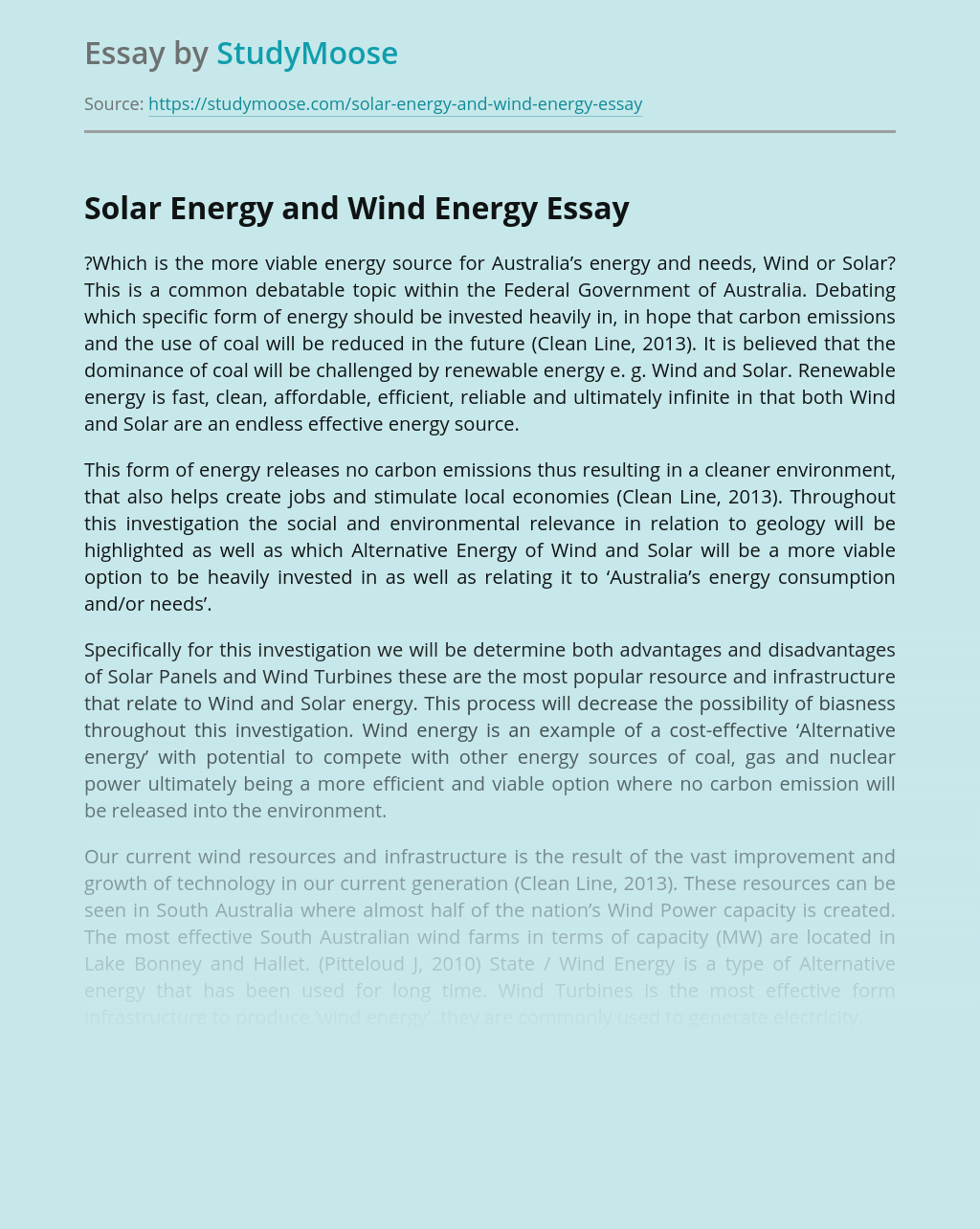