What are the factors influencing premarital sex among teenagers at the Munro College and what are the effects and possible solution?

Reason for Selecting Area of Research

Sex is viewed by society quite differently depending on the marital status of the individuals.

Don't use plagiarized sources.
Get Your Custom Essay on Social Studies SBA Just from $13,9/Page

The majority of human societies permit premarital sex, at least under certain circumstances. In modern Western societies, it is more likely to be tolerated but not encouraged. This research is to analyze the faces of premarital sex at the Munro College in Potsdam, St. Elizabeth. Research on adolescent behavior has expanded greatly over the years because of the concern with the advancing rates of premarital sex.

This paper is intended to clarify the causes, effects and possible solutions for this rising social issue at the Munro College.

Over the years, The researcher have observed at this institution that the teenagers involved are not emotionally or physically ready for the consequences that come along with sex. As a result, some young ladies become pregnant and haven’t the slightest clue where to turn next. This is only one consequence of premarital sex. “Teenagers, according to some polls, view premarital sex as acceptable as long as ‘two people love each other’”. The researcher chose this area of research because he believe it affects everyone and greatly impacts our attitude toward this issue, whether positive or negative.

What is a Questionnaire?

A set of printed or written questions with a choice of answer, devised the purposes of a survey or statistical study.

What are factors influencing premarital sex among teenagers at the Munro College and what are the possible effects and solutions to this problem? This questionnaire serves as partial fulfillment of the Social Studies Caribbean Secondary Education Council (CSEC) course as required by Caribbean Examination Council (CXC). Answers given are confidential and as such, names should not be disclosed on this questionnaire. Individual feedback received will be kept private and used only for the purpose it was collected. Please answer the following questions completely. Tick in appropriate boxes  and answer other questions briefly.

Procedure for Collection of Data

Also, an extra eight (8) were printed to be issued in the event that some assessments were not returned. Fortunately, all questionnaires were returned. Also, external secondary methods such as texts books, encyclopedias and the internet were consulted for additional information.The sampling technique that was used to carry out this operation was the systematic technique that is the researcher when to every second class to issue a questionnaire. The random sample was done by raffle. There were students between the age of 13 to 18 years of age. The types of question that was given on the questionnaire are both closed ended an open ended question. There was a total of 16 question ask 10 closed and 6 open ended.

Fig 1: Pie chart showing the major causes of premarital sex among teenagers at the Munro College.

Fig 2: Pie chart showing other causes of premarital sex among teenagers at the Munro College

Fig 3: Column chart showing the mains effects of premarital sex among teenagers at the Munro College. ‘

Fig 4: Column chart showing other effects of premarital sex among teenagers at the Munro College.

Fig 6: Doughnut wheel showing how the media can help in solving the issue of premarital sex among teenagers.

Analysis and Interpretation of Data

In analyzing the survey, cumulative data revealed that majority of the respondents were between the ages of 14 and 16 followed by the age group: 17 and 19, and the minority: 11 to 13. The survey was conducted at a single sex (female) school but questionnaires were issued to males who attend sixth form classes at the institution. Male respondents were significantly outnumbered by female respondents. Persons engaged in premarital sex counted for less than half of the respondents. The questionnaire also disclosed that a small amount of these respondents were not Christians which led more than half to believe that sex before marriage is not morally wrong. Most others believing that it is wrong had the same argument: it is against the laws of the Bible. Other reasons were that sex is special and should be put off until the right person comes along and that it was against their upbringing. Some respondents, however, insinuated that that ‘special person’ may never come along. Also, hormones are hard to control and that whatever one feels to do is their own personal affairs in which others should not interfere.

Although some respondents’ reaction was that premarital sex is morally wrong, a profuse amount tolerate the act among their peers. Only a very small number of persons believed in abstinence until marriage and the same can be said for those who encourage the act. Eminently, peer pressure was the plurality for the dominant cause of sex before marriage. Infatuation and curiosity/ignorance came in second with around the same amount of persons choosing those factors. Sexual desire and sexual maturity were also mentioned as other causes. Other causes of premarital sex were almost evenly chosen among respondents. According to the evaluation of data, many respondents believed that persons engaged in premarital sex because they do not have any knowledge of the possible consequences. Most respondents revealed that their sexual knowledge came mainly from friends and television. Others said their knowledge came from their parents, books, and other forms of media such as magazines and music.

One response that everyone agreed on was that if parents allow their child to be too “free” or if they keep sheltered, it can force them to be engaged in sex. If you tell someone not to do something, then they will want to do it even more. If you give someone too much room to do something, they will eventually do it. Therefore, there has to be a balance. Another issue raised was that of the changes in persons having sex. A lot of respondents saw changes in their peers’ attitude: they get bolder and act more mature; appearance: they carry themselves better; academic work: their grades start to drop and their social life: they “come out of their shell” and interact more with persons of the different sex. However, no one mentioned anything having to do with the change in health of their peers.

They may be unaware of the possible dangers. Unwanted pregnancies were deemed the main effect of sex before marriage as chosen by most respondents. This was followed by the transmission of sexually transmitted infections and promiscuity respectively. One person mentioned that another effect was cervical cancer. According to research, premarital sex leads to issues within future intimate relationships. Most respondents agreed with this statement. A few were undecided and some disagreed. The feedback revealed mainly that sex before marriage can lead to depression. This is because of unwanted pregnancies, unease from contracting sexually transmitted infections and guilt from disobeying their parents and more importantly, God’s word. This can cause persons to isolate themselves within later relationships and may cause intimacy issues between partners.

Also, the concern of trust was great among choices. It may influence persons to believe that their partner is being dishonest in the bond; mainly because the partner views the issue of premarital sex as ‘just sex’. If this is the second party’s attitude toward sex, then that person could be involved in outside relationships without regret. Another effect of premarital sex was bad marriages. This was the second least favored choice among students.

However, studies show that major effects such as pregnancies can thrust persons into ‘shot gun’ marriages where these marriages hardly ever work out because the persons involved, perhaps, were not even in a relationship and did not share a mutual love for each other. Some, but very little persons also believe that once engaged in premarital sex, it may become overrated and they may not view it as special when they get married. Fortunately, most respondents believe that parents can solve the issue of premarital sex through parent-child communication. At the same time, more believe that media cannot help in finding the solution to this ever-growing issue of premarital sex.

The major cause of premarital sex among teenagers at the Munro College is peer pressure.

The main effect of premarital sex at the Munro College is unwanted pregnancies.

It is believed widely at the Munro College that the issue of premarital sex cannot be solved. Because of the technology that is available in today’s society.

Sex abstinence education can be a very effective method of prevention for premarital sex if done correctly. This includes aiding teens in identifying sexual temptations, avoiding or removing these temptations completely, teaching them to refer to the Bible for inspiration, and giving them alternatives such as placing them in sports or other extracurricular activities. Parenting is a personal commitment. Parents cannot always depend on schools and churches to teach their children about sex. Children live what they learn therefore if the parental belief is that adolescent sex is appropriate, the adolescent will too and will act on that belief. When talking about sex with teens, the approach of the parent has to be one that is understanding and open minded, but at the same time focused. 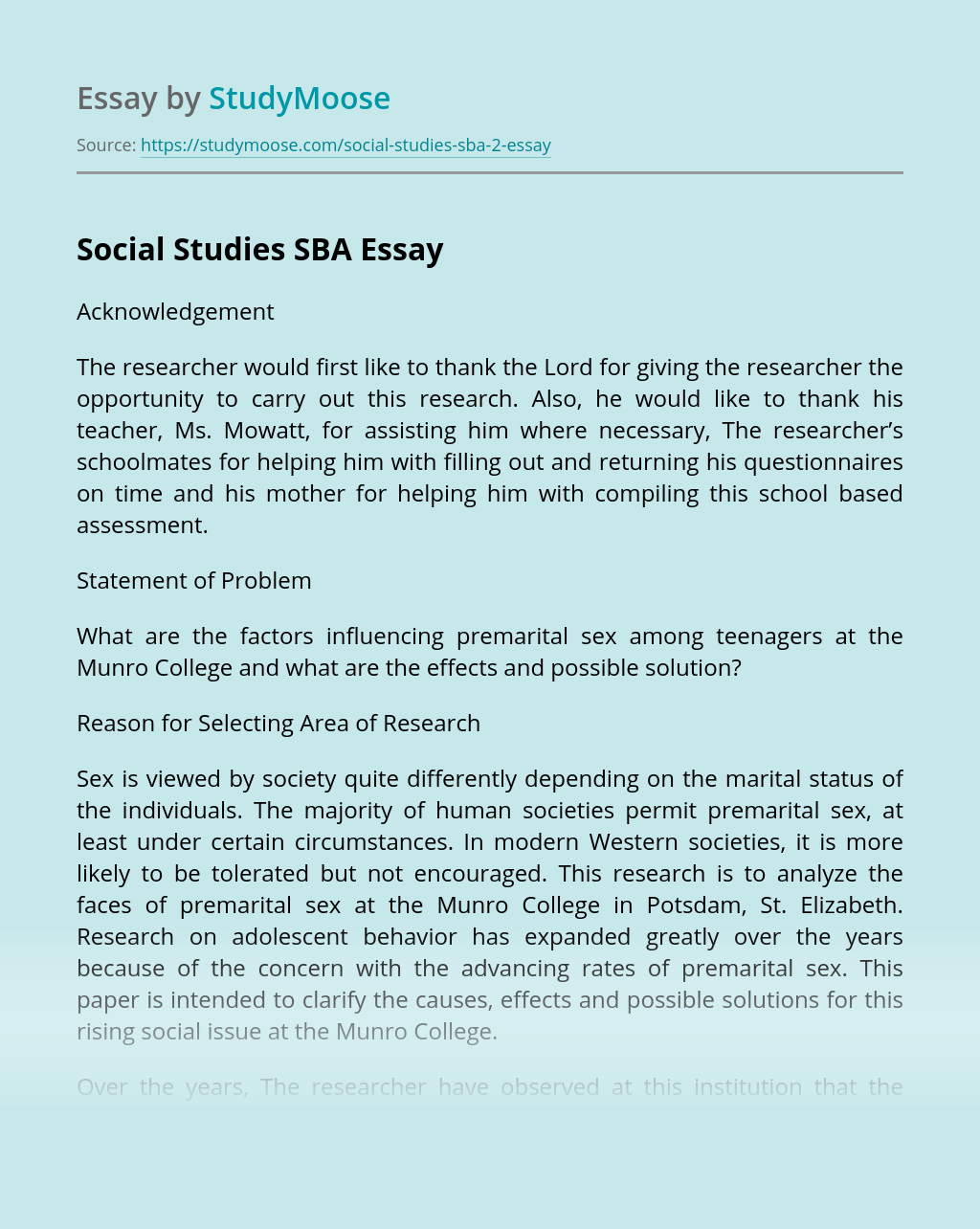