“Social inequality is a more pressing socio-economic challenge than poverty in contemporary South Africa.” South Africa is one of the most unequal countries in the world, but not the poorest (with reference to income). We can see that the inequality in South Africa has worsened over time by looking at the country’s Gini Index score. In 1996 the score was 0.66 and in 2008, 0.70. The score has also deteriorated in terms of population groups: the score went from 0.54 to 0.62 between Blacks and from 0.

Turn in your highest-quality paper
Get a qualified writer to help you with
“ Social Inequality in South Africa ”
Get high-quality paper
NEW! AI matching with writer

43 to 0.50 between Whites (The World Bank, 2012). Countries such as Japan and Denmark have index scores around 0.25. The difference is quite visible. This essay will define poverty and inequality, discuss the measures and consequences of poverty and inequality, and discuss why inequality is a more pressing socio-economic challenge than poverty. Poverty can be defined as the failure to achieve certain basic capabilities and the inability to live a valued life. Basic capabilities include life, health, education, emotion and affiliation (Nussbaum, 1990:143).

However, in the context of South Africa, no official definition has been adopted.

It is important to note that income is not the best measure for social relations. Social inequality is known as the biggest socio-economic issue in South Africa. According to the Oxford Dictionary of Sociology, social inequality can be defined as “Unequal rewards or opportunities for different individuals within a group or groups within a society.” (Scott & Marshall, 2009). There are various types of social inequalities in contemporary South Africa. This includes life cycle and population, education, income and poverty, and health, nutrition, sanitation, disability and AIDS.

Especially with regards to the current South African political system, the process of equality for all is a long, slow one (Wilson et al, 2012:13). In order to understand poverty and inequality, and also to understand why inequality is a bigger issue than poverty, we have to look at statistics.

In 2008 34% of South Africans and 78% of people in Swaziland lived on less than $2 a day. However the Gini index score for South Africa was 65 (2005) and 50.4 for Swaziland (2001). (The World Bank, 2012) This is a clear indication that poverty does not mean that a country is unequal. Also, we have to keep n mind that the history of South Africa, with regards to colonialism and apartheid, will always have an effect on the amount of inequality that exists in the country. Stewart et al (2007) asks a very relevant question, “Should we expect definitions and measurement indicators applied in one type of society to be transferrable to other societies?” This statement will now be answered by looking at how we measure inequality and poverty and what the social consequences of these socio-economic issues are. Social inequality is measured mainly through the Gini coefficient, a statistical measure of income inequality.

The coefficient works in the following way: a score of zero means all individuals earn the same and a score of one if a single individual had all the income. This means that a higher number means less equality in terms of income. The score for South Africa in 2008, as previously mentioned, was 0.62 for Blacks, 0.54 for Coloureds, 0.61 for Indians and 0.50 for whites. In terms of area it was 0.56 for rural areas and 0.67 for urban areas. The overall score was 0.70. (Leibbrandt et al, 2010). Another measure of social inequality is capabilities or, in other words, the power and ability to do something. The measure looks at capabilities in terms of education, health, disability and social power. Inequality in general has had little change in the past 8 years, inequality between groups is declining and inequality within groups is rising (Leibbrandt et al, 2010). Poverty is mainly measured in the following two methods. Firstly, the monetary system/approach is a general acceptance of a value and measure of wealth in a specific country or area.

It can also be used in exchange and as a basis to compare things like education systems, for example (Stewart et al, 2007:7). The monetary system/approach is only valid in the following ways: “whether utility is an adequate definition for well-being, whether monetary expenditure is a satisfactory measure of utility and whether a shortfall in utility encompasses all we mean by poverty.” (Stewart et al, 2007:8). The latter should be placed in the context of the country that is being looked at. The ‘welfare indicator’ is used in the monetary system when data is being analysed. It is argued that monetary poverty is better measured by the data of consumption. Consumption is a closer measure of income in the long run (Stewart et al, 2007:10).

The second method is the capability approach (CA) or maximisation of utility. This refers to the maximum that a person is capable of or able to do. The pioneer of this approach, Amartya Sen, states that development should be seen as the growth of human, rather than the maximisation of utility. This approach measures well-being and not income (Stewart et al, 2007:15). According to CA, well-being is the freedom to live a valued life. Even though the monetary system is an effective way of measuring poverty, I think that the capability approach is a more effective way of measuring poverty because of the following reason: Just because an individual does not have a lot of money, it does not mean that he/she is not capable of doing the maximum. It is true that resources become limited when an individual is stuck in a poverty trap, but a person’s income is not as important as their well-being. Inequality and poverty in South Africa have social consequences. It threatens social cohesion.

This means that the inclusivity of communities is very poor. Secondly, it creates ethnic conflict. In other words, it turns into a ‘battle of the races’. Thirdly, crime and insecurity levels are rising. Sociologists are very intersted in the impact of inequality on crime rates because it has such a huge influence on society, especially in a country like South Africa. The crime levels usually go up with the unemployment rate because people are trying to survive. Crime rates are usually higher when especially income inequality is present. Inequality in the workplace can create the issue of insecurity because there has been a lot of change over the past ten years in terms of inclusivity or exclusivity. The denial of creativity and talent is also a huge consequence. The reason people waste their talent is because they are stuck in a ‘trap’ of poverty and inequality. They are not motivated to excel in their lives because they believe they have nothing to live for but to, for example, stand at a traffic light and beg.

After looking at statistics and research done in the field, the opening statement of this essay will now be proven. Inequality is definitely a more pressing socio-economic issue than poverty in South Africa. Firstly, South Africa is one of the most unequal countries in the world but not the poorest. Firstly, South Africa is unequal in terms of education. In the white communities which are mostly urban, pupils have better teachers, better textbooks and more resources (internet, libraries). In the black communities in South Africa, which are mostly rural, the resources are very limited. Some schools do not even have teacher who show up and some pupils do not even own textbooks. Internet and library access is very limited. This prevents pupils from excelling in their education. However, we do see a connection here between poverty and inequality because in this context a person’s income can have an influence on the standard of education they receive.

Despite this, the government should offer free, standardised education for pupils of all races, cultures and backgrounds. The area they live in and their parents’ salary should not determine the level of educational resources they receive. The same goes for health care. Citizens of South Africa pay thousands to afford good quality healthcare. The monthly premium is determined by a person’s income. The higher the income, the higher the premium. On the other hand, people who cannot afford medical aid, have to make use of the services the government has to offer. In South Africa, state healthcare are in most cases not very good. Thirdly, a country like South Africa’s past should not have an effect on the quality of people. The country has been a democracy for ten years. Unfortunately, the running government is trying to justify apartheid by actually making inequality worse.

No equality exists in the workplace, education, income and health. Inequality is more pressing than poverty because it keeps individuals from having opportunities and to maximise their abilities to do something in society. Poverty is also pressing, but the individual has access to aids that can help them maximise their capabilities. In conclusion, this essay has defined poverty and inequality and also discussed the social consequences it can have. The measurement of poverty and inequality has been discussed and statistics have been used to argue the opening statement. This essay has proven, with reference to research and statistics, that inequality is a more pressing socio-economic issue than poverty in South Africa. 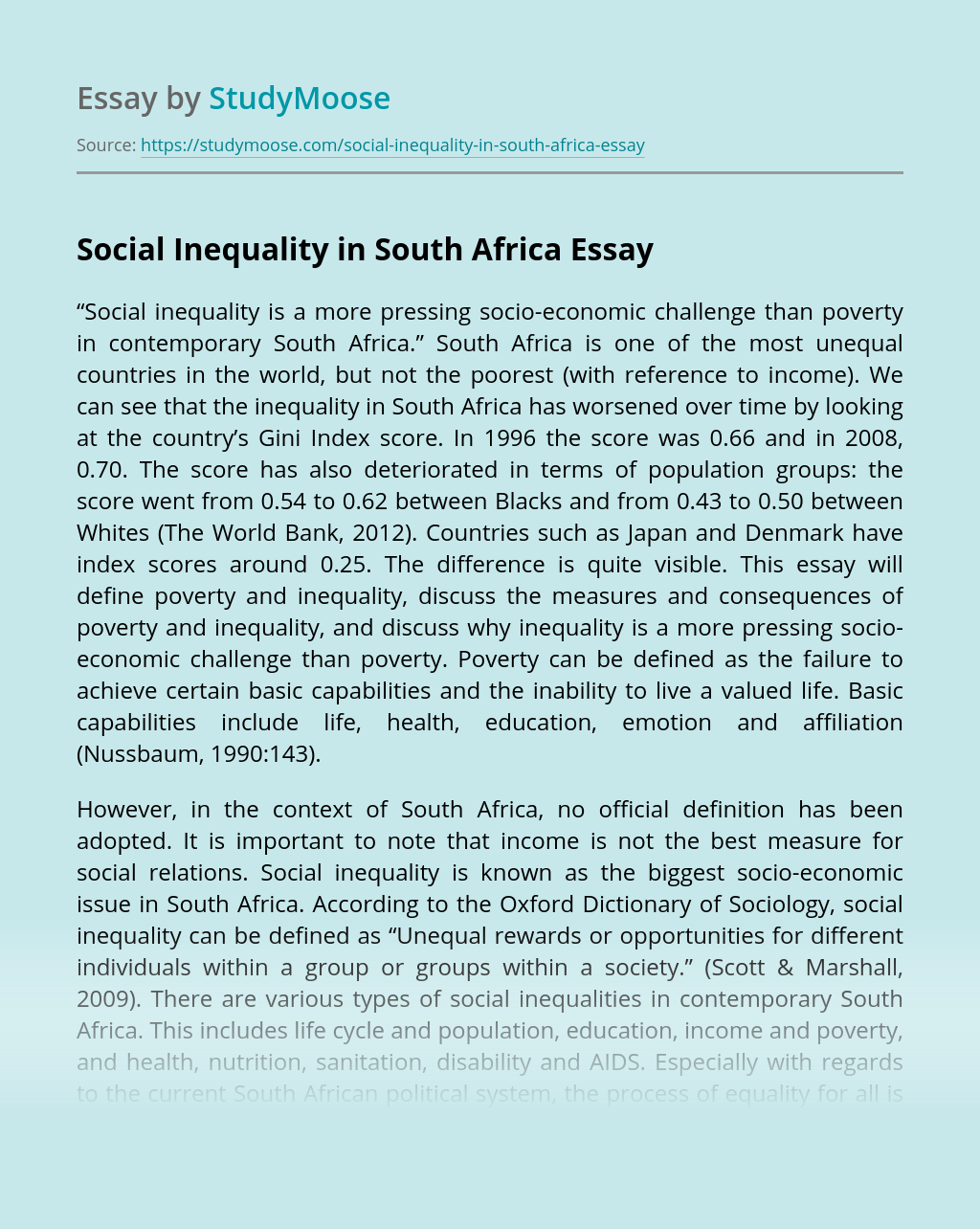 Turn in your highest-quality paper
Get a qualified writer to help you with
“ Social Inequality in South Africa ”
Get high-quality paper
Helping students since 2015
Stay Safe, Stay Original