Don't use plagiarized sources. Get your custom essay on
“ Social ANxiety and Social Support ”
Get custom paper
NEW! smart matching with writer

The authors further argued that social supporters or a persons resources closest to him act as agents in challenging his or her behavioral and emotional problems once diagnosis have been made, contributing to a more effective rehabilitation program. The third reason is the several psycho social factors have been found to effect health and well-being through the disruption of social relationship. Social support has been defined as the recognition that leads a person to believe that he is cared for, loved and valued.

( Taylor, Sherman, Kim, Jarcho, Takagi, & Dunagan 2004; Baker, 2010) Cohen and Sayme (1985) defined it more simply as the sources provided by other persons. Social support may be viewed as having a negative and positive impact on health and well-being. Usually, it is in the form of assistance that is provided by the members of the family, friends, neighbors and others. Harter (as sited in Kovacev and Shute,2004) defined it as the positive regard one receives from others. Generally, the family is noted to be the most important support system in a person’s life.

Nowadays, however, the absence of parents dew to death, separation, abandonment or working away from home is observed among families. As a consequence, the traditional family structure of a father, a mother and a child does not match the classic model of a complete family. In fact, Harland, Reijneveld, Brugman, Verloove, and Verhulst (as sited in Elmaci, 2006 emphasized that divorce, separation and death of the parents have been found to cause behavioral and emotional problem of among children. Other studies pointed to the significant of social support to the appearance, course and duration of physical and psychological illnesses (Elmaci,2006). It is then observed that social support system plays a significant rule in protecting people against psychological pains brought about stressful day-to-day life experiences. A part from the family, the school is often sited as an important support system. Sharma (2012) reported that school environment plays an essential function in adolescents development and progress. As adolescents spend most of their time attending to their studies and school activities, heir relationship with administrators, teachers, parents and fellow students are established and fostered. The total development of their personality becomes more rounded as the continue their social relationship with this people. The adolescents stage is remarked as the time of storm and stress in which majority of adolescents encounter ups and downs as they relate to their social relationships. (Gines, Dizon, Obias, and Vendiel, 1998) for adolescents it is helpful and comforting when they know that there are people who care, understand, and love them in times of stress and problems. Normally if a person is liked, accepted, and has a number of social support, he or she is not socially anxious or inhibited. In contrast, if a person is not liked and has a few social support, he becomes somewhat social anxious or inhibited. Fernandez (2008), a practicing psychotherapist in the Philippines observed that many clients referred to her are adolescents with symptoms of social related anxiety. This observation brings to light the fact that adolescents indeed experience some form of social anxiety resulting from their social environment. Social anxiety is defined as the state of apprehension, tension and worry in expected or in actual social situation. Socially anxious individuals might find it difficult to interact with other people around them that impede their social functioning. To some, one-on-one or face to face interaction might encourage an increase level of anxiety, while for others, social interactive situation like for example performing in front of other people are not anxiety-producing situation. Siegel and La Greca (2009) reviewed the reason why social anxiety among adolescents is important to study. First, social anxiety is linked wit behavioral and social inhibition that obstruct the establishment of successful and intimate relationship with others. Second, a higher level of social anxiety maybe an indication of social phobia disorder that appears during adolescent stage. Third, a high level of social anxiety any result to other serious disorder like major depressive disorder and alcohol substance abuse. Deepshika & Bhanot (2011) note that it is during adolescents that well-being decrease aamd psychlogical problem increase, making adolescents more vulnerable to emotional distress. Therefore, it is important to assess the kind of social support that adolescents are recieving to help them overcome any emotional distress they are encountering, Elmachy (2006) stated that the more social support receives from family, friends and society, the more likely the person will show physical health and less psychological symptoms. In Western cultures, a person is generally viewed as independent, someone who separates himself from others and chosen to pursue his own will (Taylor, et, al, 2004). This is in the contrast to Asian who value connectedness and or relatedness to other people. Fernandez(2008) reported that for Filipinos, in particular, goal and identity are conical based and independent. When Filipino adolescent perceive that their parents are not supportive of them, this create feeling of anxiety. It is therefore important to examine filipino adolescent perception of social support in overcoming social anxiety. Reddy, Rhodes, and Mulhal (2003) remark that the transition of adolescents to middle school is a crucial journey among American students. The occurences during early adolescence like puberty and identity search mark the stage for decrease in academic, behavioral and emotional adjustment (Reddy, et al.,2003). The study further said that it is during early adolescence when motivation, performance and self-esteem decrease, whil depression, anger, and anxiety increase. One may say that these changes, particlar among adolescents, are existing and have a complex impact on the adolescents personal, social and academic outcome. Students dealing with issues that affects their capability to do their best can be supported by guidance and counseling. The guidance counselor/staff are encouraged to facilitate guidance program activities that inrease opportunities for the students to reach and explore their full potential development; that is to assist students to have problems that interface with their healthy personal, social , o academic development. (sited in Seyoum, 2011) The purpose of this research is to examine the role of social support on adolescents’ social anxiety. This study will center on the Filipino high school students, specifically in Saint Mary’s University Senior High School. It is considered an important issue to explore further because of its serious effects to health. This study hopes to gather students’ data that allows for an evaluation and understanding of the students about social anxiety and its causes and effects. 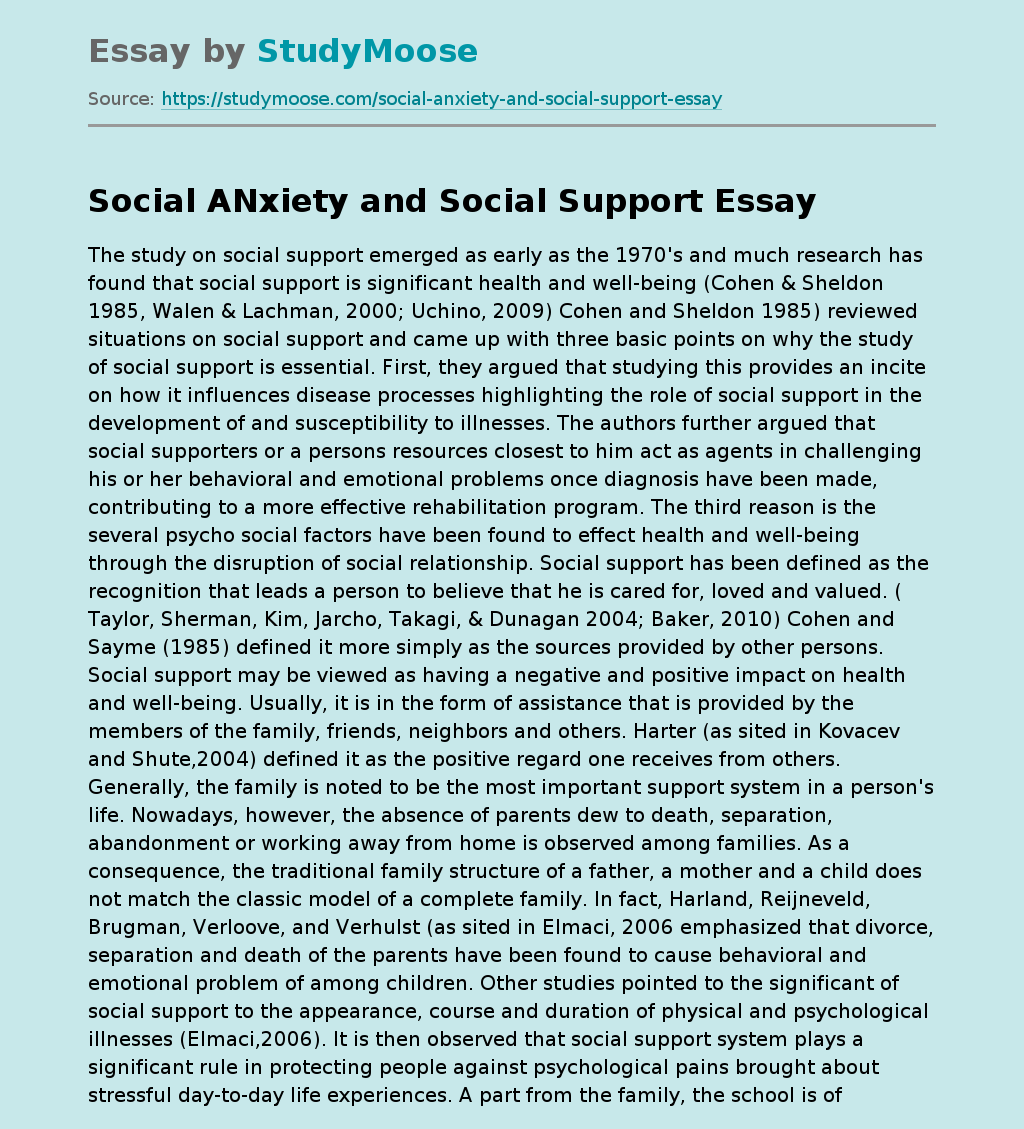