Smartphones in our lives

Don't use plagiarized sources. Get your custom essay on
“ Smartphones in our lives ”
Get custom paper
NEW! smart matching with writer

Social networking sites can be used as a tool to keep in touch with friends and to communicate and interact with people, no matter where they are. As a consequence it has become very popular particularly amongst teenagers to interact and connect with others online, even though there is evidence showing that these connections are less emotionally satisfying, which leave them feeling isolated.

(Miller, C. 2019). However, it should be mandatory in schools to educate students on the correct use and safe access to social media.

It is essential for children and teenagers to learn about the consequences of social media, as it is a likely damaging and destructive environment, which can lead to a variety of issues including mental illness, such as depression and anxiety, addiction, and cyberbullying.

The average teen spends nine hours a day using electronic media, according to a survey by Common Sense Media.

That survey also found that half of teenagers felt addicted to their phones and 78 percent checked them hourly or more. (Pellissier, H. 2018). Many teens usually spend sleepless nights on social media. The disruption of sleep has many different effects, like cases of insomnia, mood swings and increases in food indulges and sugary cravings. Some people state that if children are old enough to have a social media account or phone, they should also be able to make sure they use it responsibly. According to the National Alliance on Mental Illness, it states that for people between the ages of 15-24 suicide is the third leading cause of death due to cyberbullying.

Over 69% of people who commit suicide have been diagnosed with mental illness due to cyberbullying. In addition, 95% of all teenagers ages 12-17 are considerable users of the internet and 80% of those teens are social media users.

From these statistics alone its undeniable that a huge portion of our youth can easily become victims to cyberbullying and even worse, being victims of depression or suicide. Do we not owe it to 69% of youth that sadly end their lives because of online threats and harassment? Do we not, as an institution have a duty to protect our children? We must take initiative now! It is much needed that we stand together against these threat against our upcoming generations. This is why it is crucial for our education system to incorporate the safe use and consequences of social media as part of the scholar curriculum.

In the other hand, social medial is also a highly effective way of being well informed of what is happening around the world, it is a useful tool to keep in touch with family or loved ones and it gives people the flexibility to interact with others. However, a huge number of young people tend to overshare private information and personal pictures of themselves to people they have barely met! Imagine that, your photos, your address, your phone number, your card details, all at the mercy of an unknown individual who can potentially share this information with others. There is nothing you can do about it nor stop it. You will never be able to fully eradicate it. Therefore, I strongly believe that by educating our young people and bringing awareness of these potential dangers to them, we can help reduce cases of illegal information sharing and privacy violations.

Now, we are all aware of the addictive nature that social media has. According to neuroscientist, Mark Goulston, there are certain brain hormones such as oxytocin and dopamine that are located in the pleasure centres of your brain and are released when individuals actively use social media sites. Although, social media is a psychological addiction and not a substance one, brain scans reveal that there are similar impairments of regions of the brain, especially in the degradation of white matter, that those with some kind of drug dependence usually have.

These regions control emotional processing, decision making and attention, Social media is extremely addictive as it provides immediate and satisfying reward with small effort. Your braing automatically begins to crave it more and more as you desire these chemical stimulations. Just like a drug, am I right? Some users even say that they find difficult to control the amount of time they spent online and can’t log off. I think it’s evident enough that even though social media can stimulate our brain and makes us feel great, its harmful for our real-life relationships and it distances us from the connections that surround us, affecting our ability to interact to people face to face.

As an institution and as in part of society, we must take the initiative to prevent this from happening to our children. If we teach them how to avoid this from happening to them the harm caused would be less. We are still on time to change our generation, we can be the generation to make an impact. We are the ones shaping and creating our own future, it is our responsibility to act now and make a change. We always tend to say our society is messed up, but have we ever stopped to think that we are the society? We are the ones that will have to take leadership and be in charge of our future by being different, by taking smart decisions such as teaching the proper and safe use of social media in schools, which will for sure have an impact for the rest of our lives.

Smartphones in our lives. (2019, Nov 15). Retrieved from https://studymoose.com/smartphones-in-our-lives-essay 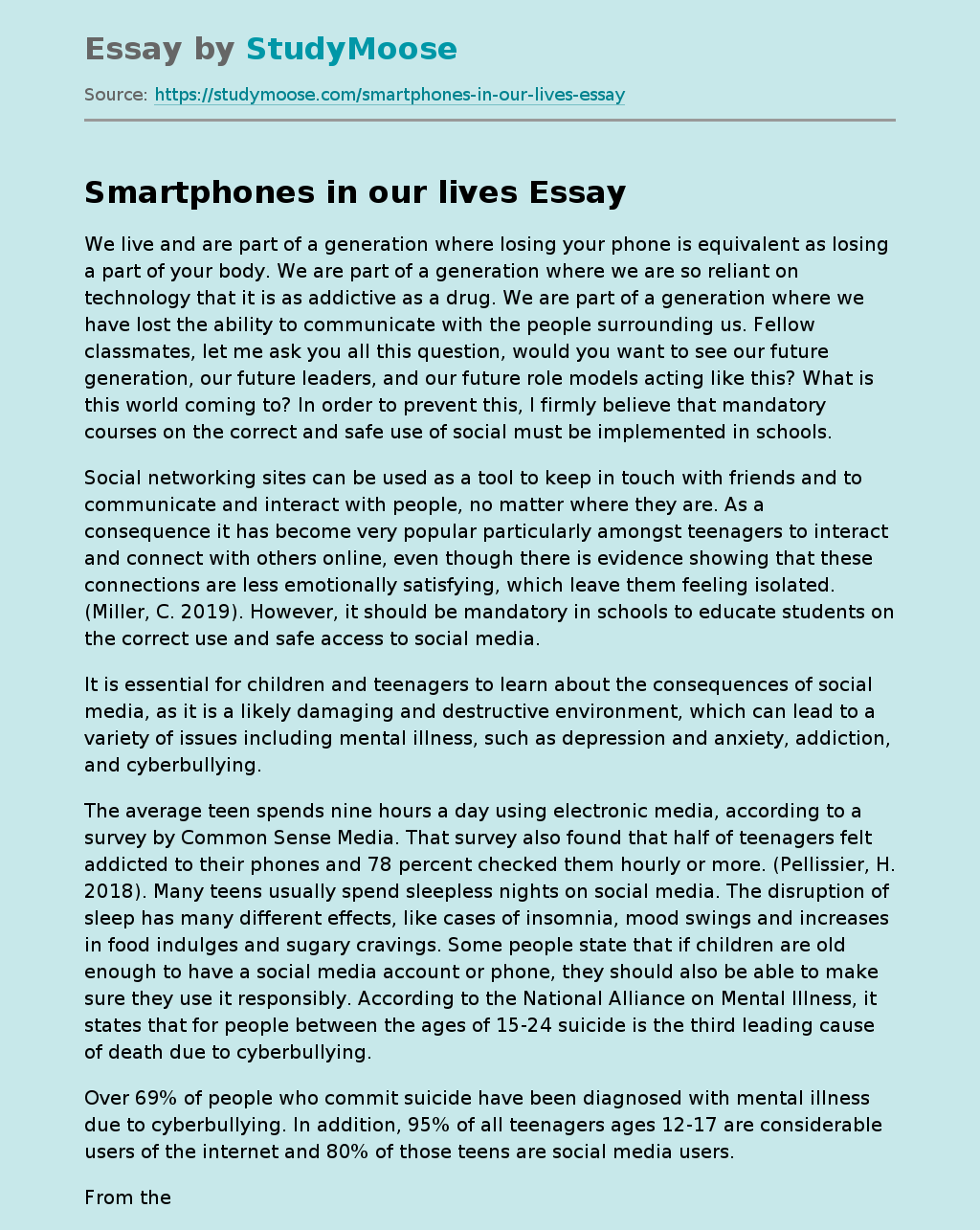