Smartphones in the Classroom?

The topic of Smart phones being used in class is a well debated topic especially for the classroom’s of today. Some teachers believe that it’s just a distraction and should be put away. Other teachers believe that it’s just another way for students to “cheat” on the various assessments that they will receive. Some teachers also believe that when given the option to use smart phones that students will just abuse the idea and be on the phone more than during class work.

Don't use plagiarized sources. Get your custom essay on
“ Smartphones in the Classroom? ”
Get custom paper
NEW! smart matching with writer

There are some teachers that permit the students to use smart phones in some class room activities and the students end up learning a lot from the activity and actually like doing it at the same time. There is also a term for it called “BYOT” (Bring Your Own Technology). This is also a great idea because a recent survey says that over 80% of kids have Smartphone be 8th grade. So there is no problem of anybody not having a phone.

The students of today are in dire need of a new and more modern classroom activity. The usual and boring paperwork speeds up the time that it takes to lose a child’s attention. So when you put the Smartphone’s into the picture the child will pay more attention increasing his/her attention span giving the teacher/speaker more time to give out the information he/she is trying to.

Another reason smart phones should be used in class is because they can cut down on school supplies. Since most smart phones have the applications notepad, calendar, and many more.

With all these applications on the Smartphone and the students always having the phone on them it would completely obliterate the everyday problem of students being unprepared for class. This would then cause all the students to be prepared for class and ready for all the notes, important dates, etc. and be able to store them on the device that they always have on them. This would also cause kids to be able to frequently study. Even though the idea of Smartphone’s is great and has many advantages it does have a few downfalls. For instance students may feel amicable and decide to send another student the answer to a test.

Also some Smartphone’s had a very transient battery and might need to be charged frequently. Another downfall is that the paperwork that the teacher/speaker gives the students might seem too evanescent since the students are so use to using the phone for all their work. Even though these problems seem very major but they have very easy solutions and will not affect the classroom environment. In the article “Gadgets Go To Class” (paragraph two) it states a very good point where it states “Putting a new laptop at every desk can cost hundreds of dollars per student, so tapping into the tech that kids already have seems like a no-brainer.

” Which is true sense students already have these “state of the art” devices and the school only has “ancient” computers and don’t have enough money to buy more up to date devices. This would also eliminate the problem of everybody not having a computer because there are not enough computers. This would allow every student being able to engage and counter the activity instead of having to share because there aren’t enough computers or devices. The use of Smartphone’s in the classroom environment is going to be a must in the next couple of years.

Since schools don’t have the money to keep up with the constantly upgrading technology, the students will just have to be able to bring them their selves. The article states (Paragraph 3) that some districts such as Meriden, Connecticut and Allen Texas have starting using the “BYOT” plan. The “BYOT” plan has strict policies of when and where the cell phone can and cannot be used. This makes sure that the teacher still has control over his/her classroom so that no problems shall arouse on whether or not the students will have too much power.

In Conclusion the BYOT plan should be initiated in all school districts because it broadens students learning and modernizes the classroom without the school spending a single penny. Their fore its economically and will improve classroom functionality. Also the BYOT plan takes out the need for textbooks, notebooks, agendas so if the students have a smartphone, laptop, tablet, etc. he/she will always be prepared for class. Again the BYOT plan seems like the best choice for all classrooms and should be enforced throughout all the school districts.

Smartphones in the Classroom?. (2016, Sep 28). Retrieved from https://studymoose.com/smartphones-in-the-classroom-essay 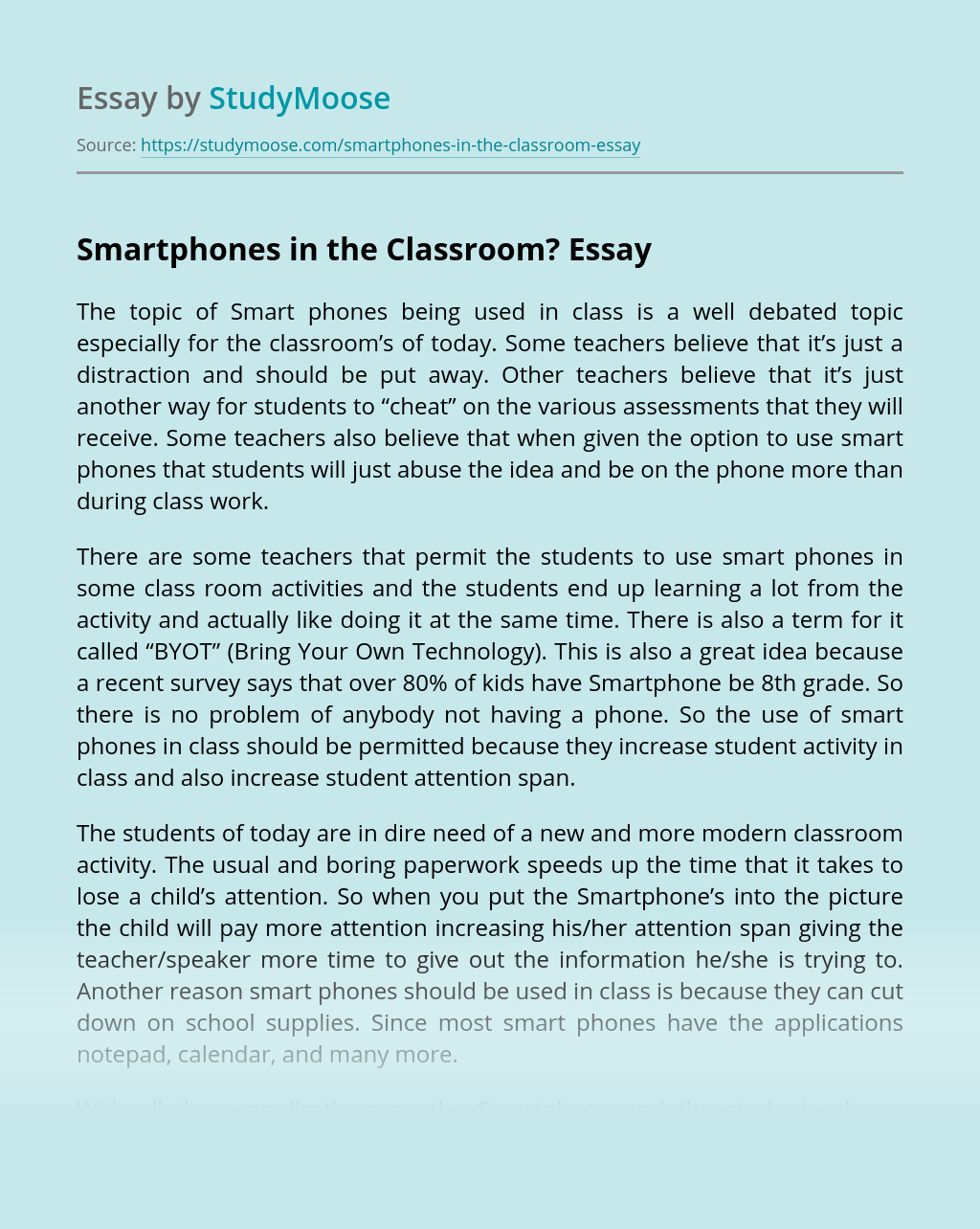