For my book analysis, I chose to read Audre Lorde’s “Sister Outsider” the book is a collection of her best Essays and Speeches. Audre Lorde is a black lesbian feminist who is in my opinion after experiencing her writing and poetry a potential role model to all. Audre Lorde uses many forms to explore race and sex issues and the anger, guilt, and fear that may result from internalizing a corrupted society.

This book is the textbook feminist text that is truly empowering for all women.

Don't use plagiarized sources. Get your custom essay on
“ Sister Outsider: Essays and Speeches ”
Get custom paper
NEW! smart matching with writer

Several themes stick out in Lorde’s essays, I found her lack of trust in America’s value system to stick out above all. She believes our current system props up racism, sexism, homophobia, and a laundry list of other heinous crimes. I personally agree with Lorde and the way she approached it was genius. There was a quote in there that rang this theme true ‘I speak here of poetry as a revelatory distillation of experience, not the sterile wordplay that, too often, the white fathers distorted the word poetry to mean—in order to cover a desperate wish for imagination without insight.

’ Just the way she suddenly approaches the fact that America in its core was erected by slave-owning white men. Bringing to attention the institutionalized racism that we have held since day one.

Lorde explores the idea of intersectionality so clearly and gracefully, going into this book I expected this as we read one of her works early on in the semester “There Is No Hierarchy of Oppressions” she explores the idea that we can’t address just one form of hate when we need to address it all as one large ideology.

Truly to me thought all the pieces in Sister Outsider Lorde seriously bring new ideas to the table and challenge our social norms in both subtle and vibrant ways. For example, through the writings, you’ll notice ‘Black’ is capitalized while ‘American and ‘Christian are usually not. Lorde is clearly in my eyes challenging the ideas embedded in our core values, for a country that claims to promote freedom of religion and supposedly promotes diversity we have a lot of systemic issues that make it seem wrong to be anything other than a white, Christian, American.

Something that is also embedded in our culture as a country is money, this isn’t just America it’s everywhere but the pieces in Sister Outsider Lorde explore a little bit into the country’s economic system in the fact that our societal norms hold us back from exploring ourselves. We have to have money to physically survive meaning that we have to have some form of income. Making people spend most of their lives working, she brings up the idea that minority groups are especially held captive to that. She references that minority groups were economically powerless at that time meaning they have less time to be them. Audre believes we are encouraging economic division and keeping minorities’ powers to a minimum.

Going into this book I knew the work is mostly referencing the 70s and 80s but the most upsetting thing about that is not a lot has changed since then. Sure a few very basic human rights were restored but the system and culture haven’t changed much at all. We are seeing a great push as the lack of tolerance has seemingly finally been a large topic of conversation, but the ideas Lorde wrote about are still issues today. In Lorde’s writing, you can feel the intensity and even anger at times. The essays and speeches in “Sister Outsider” make it clear that Lorde’s anger is a callback to what she sees, fundamental injustices inherent in the society of her time but it still can be translated to the current day.

Audre Lorde uses many forms to explore race and sex issues and the anger, guilt, and fear that may result from internalizing a corrupted society. But this book for me was eye-opening and inspiring. Lorde’s work brought me closer to the ideas of intersectionality and its necessity as well as the corrupted society we still live in the current day. If this book did something for me it makes me want to talk more about these topics. Audre Lorde’s raw emotions and pure intelligence was jarring in the best way possible for me. This book was truly an experience for me and I’m glad I was able to explore it. 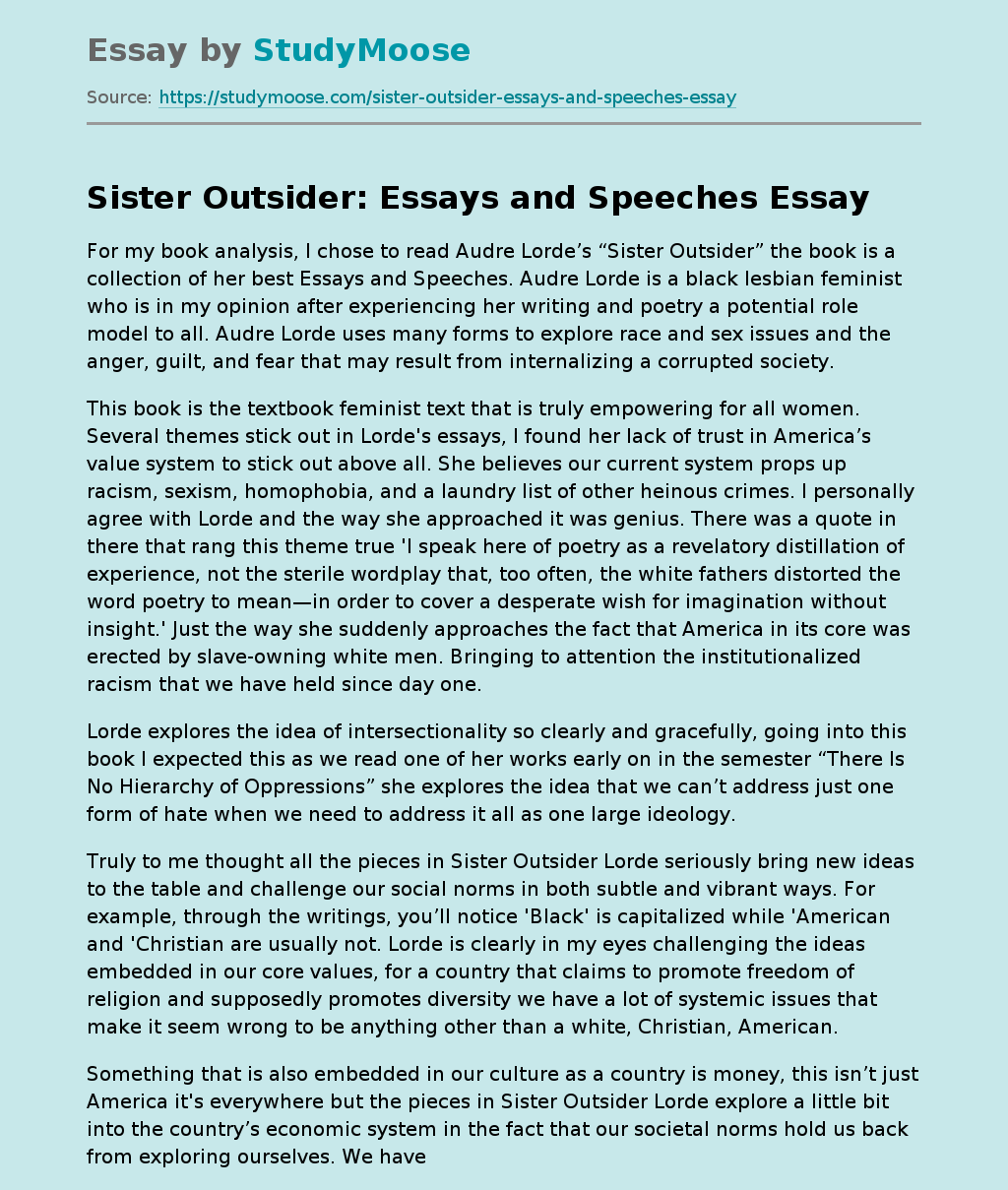