This discussion paper focuses on the character of Sir Thomas More in the play “A Man For All Seasons”, written by Robert Bolt in 1960. This paper will explore the character of More: his religion, his occupation, his conscience and the way in which they are brought into conflict. It is these aspects of More’s character that ultimately lead to his demise and thereby offers a moral message for the reader.

Thomas More’s religion is the core influence on his decisions he makes throughout the play.

Don't use plagiarized sources. Get your custom essay on
“ Sir Thomas More: A Discussion Paper ”
Get custom paper
NEW! smart matching with writer

It is More’s Catholic views that hold him back from approving King Henry’s plans to divorce Catherine, in order to marry Anne Boleyn. We gain a sense of the strength of More’s faith when he states to Norfolk that ‘the service of God is not a dishonour to any office’. More is trying to explain that being a pious religious man does not conflict with working as one of the King’s senior advisors.

More’s refusal of Roper’s plans to marry Margaret is another decision, purely influenced by More’s religion. He insists that as long as Roper is Lutheran, or a ‘heretic’, he will not be allowed to marry his daughter. However the major issue that More has with his religious beliefs is the controversial approval of divorce. More’s stance is aligned with an interpretation of the Bible that prohibits marriage to the widow of one’s brother. This deeply-held theological belief comes into conflict with his duties as a statesman.

More’s occupation directly conflicts with his personal beliefs when the King asks him to approve the divorce. More is described as ‘honest’ and that he is ‘known to be honest’ by King Henry and this is why the King seeks his approval of the divorce. The King wants to use More’s reputation as a man of principal to approve of the divorce. However for More to approve of the divorce he would have to betray those very principals. This puts More in an awkward position, stuck between his political position and his true beliefs. By telling More that ‘your conscience is your own affair, but you are my chancellor’, Henry clearly expects More to conform and approve. However the strength of More’s morals outweigh his position of office and force him to resign the chancellorship.

Caught between the King’s expectations to approve, and his religious moral position, More becomes a prisoner of his own conscience. It is ultimately More’s adherence to his conscience that allows him to be charged with high treason and eventually, his execution. Despite the charges that were laid against him and the torture he was subjected to, More would not ‘abandon his deep-rooted belief in the Catholic Church’. The King’s desperate yet failed quest for More’s approval concludes with More in literally a life-and-death situation. The King ‘wants either Sir Thomas More to bless his marriage or Sir Thomas More destroyed’, revealing the King to be a very shallow character. Henry does not want anyone, like More, opposing his marriage plans so if More does not approve, he must be killed to ensure Henry does not appear to be undermined by one of his most senior advisors.

The message to the reader here is about conscience – how much would you be prepared to sacrifice to hold true to your conscience? This question to the reader is reinforced in the alternative ending written by Bolt, where the Common Man reflects on More’s death and questions whether the sacrifice was worth it. More’s religion and occupation conflict, and cause chaos within his conscience. A Man For All Seasons is less a story of King Henry VIII’s formation of the Church of England, but more about a man’s struggle to stay true to his conscience in a world of compromise and pragmatism. 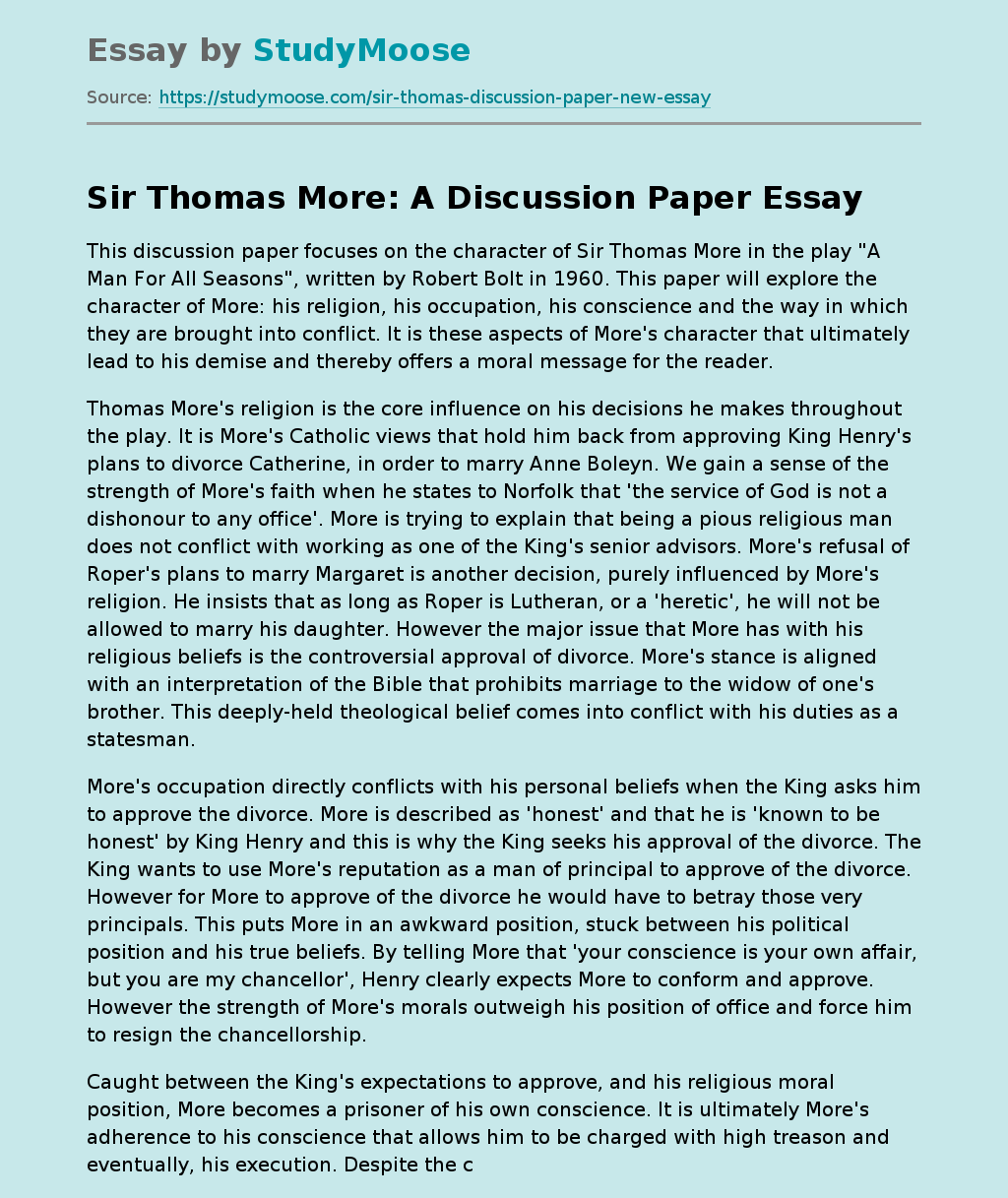