Knights, in time, have evolved and become something much different from that of what they were in the Middle Ages. They have always been looked at as men who were in war and whose main duty was to protect. While this is somewhat true, they had a much broader job. It was the duty of a Knight to fight for and serve their King while following the code of Chivalry. This Code stated that a Knight should have bravery in battle but should also exhibit such qualities that shows them to be devout, loyal, courteous and generous (Gautier 42).

Don't use plagiarized sources. Get your custom essay on
“ Sir Gawain and Modern Knights ”
Get custom paper
NEW! smart matching with writer

All these characteristics are shown through the members of the Society for Creative Anachronism (SCA), a group that focuses on recreating medieval societies in the Middle Ages and whose members are actually referred to as knights. The members of the SCA often role play and have tournaments between different groups while keeping their character which is either a knight, king or queen, which is why they are the best example and representation of a Middle Ages knight that we have today.

Knights of the Middle ages first began back in the 700s in which they were warriors for Charlemagne, king of the Franks. He had a vast empire which prompted him have his soldiers ride horseback into war to cover more ground. As a reward for fighting for the king, Charlemagne would grant his knights land and in turn, the knights would continue to fight alongside the king. This set an example in much of Europe as most kings replicated this practice and for the next 700 years this took place.

As a result, it changed the lives of many families. If you were born the son of a knight you would more than likely become a knight. As time went on, some knights actually broke away and vowed to be defenders of the Christian faith. They formed several military orders that fought in different crusades, which were religious wars primarily fought between Christians and Muslims.

There were three main orders though that consisted of The Knights Templar, The Knights Hospitaller, and The Teutonic Knights. The Knights Templar originated in the late1100s. They were easily recognizable as they always wore white robes with red crosses on the front. They became famous fighters during the crusades as they always were the first to charge in battle and refused to fall back even if they were losing. One of their most famous battle was the of Montgisard. In this battle 500 knights led a small group to victory over 26,000 Muslim soldiers. This battle can be seen being replicated by the SCA on a yearly basis at the main gathering of the organization. The SCA gathers thousands to the even to show fans the true victory the Knights Templar had over the Muslim Soldiers. The next military order were The Knights Hospitaller which were founded in 1023. They vowed to protect the sick pilgrims and the ones facing poverty in the holy land, in which they succeeded during the crusades. They also wore a distinguishable suit as their robes were black with a white cross on the front. The last military order were The Teutonic Knights. The Teutonic knights, once a part of The Knights Hospitaller, were German knights. They also wore black robes with a white cross that was found on the shoulder. They were a very powerful group but were defeated in 1410 by the polish during their conquest of Prussia which took place after the crusades.

At the end of the Middle Ages, The knight was no longer an important aspect of the kings army, and for two main reasons. The first was that as countries began to develop, they no longer had the need for knights and lords to fight for them. They paid soldiers in money rather than land to do the job. The second reason was the change in the way wars were fought. The advancement in weapons, which consisted of long bows and eventually firearms made the knight and their metal armor useless against such weapons that could easily penetrate their protection. These changes ultimately led to the end of the Middle Age Knights but their stories are remembered forever, especially with the help of groups such as the SCA.

In Sir Gawain and the Green Knight, we saw several instances of a test of one knights chivalric attributes. In the story we know that Gawain is not the best example of a knight as he himself says in the story, “I am the weakest, well I know, and of wit feeblest;/ and the loss of my life will be of least any” (Sir Gawain l. 54-355). The author portrays how a knight who is not worthy is tested over several different attributes that a knight must possess. A test of one’s loyalty, courage, honor, purity, and courtesy and above all he tested his chivalry. Loyalty is the first test seen in the story. When the green knight enters the hall and challenges everyone there, Gawain is tested to see how loyal he is to his king, in which he passes. King Arthur was about to take on the challenge himself when Gawain said “Would you grant me this grace” (Sir Gawain, l 343).

Sir Gawain is also tested several times in the castle before encountering the Green Knight on his journey again. Upon arriving at the castle he makes it clear that the Lords wife is very beautiful to him, foreshadowing what is to come. As a payback for allowing him to stay at the castle, the lord told Gawain that he must give him whatever he receives while staying at the castle. So as the next three days passed, Gawain’s honesty and word were tested as the wife of Lord tried to seduce Gawain on multiple occasions in which she gave him a few kisses during the process. So therefore when the Lord asked Gawain to give him what he received he had to give him kisses each time, only failing to give up one thing he received which was the kirtle. She gave him this telling him it would protect him from death knowing that he would never possibly give this up. At the end of the story readers can see that Gawain was tested through flattery, seduction, and the flat out will to survive. Sir Gawain’s failed efforts reveal the importance of how chivalry defines a knight along with the other values that were tested. Plays about the tests of Sir Gawain are a main act that the SCA puts on. They portray a valuable lesson that the knights had to abide by and show the importance of knightly characteristics during the time period.

The word knight means boy or servant which makes sense when it comes to the development of a knight and what it took to become one. Most knights were born into the nobility and became knights because they were the son of one. Others, such as commoners, would sometimes be granted knightlihood for extraordinary military achievements. The Children that were born into the title, were taken care of by foster moms inside the castle until they reached the age of seven. When they became seven, they earned the title page and were placed under the watch of the lords. This is when they began training as they were set out to hunt with the huntsmen. They also began studying with the priests of the castle at this age.

As they get older, they eventually become assistants to knights and help them with their daily duties such as cleaning armor and taking care of animals. They would also sometimes set out on voyages with the knights and would often train with them in battle using wooden swords and shields. When the boy reached the age of 15 he became what is known as a squire. They held a ceremony for this transition in which a priest granted the new squire with his own sword. He began to train with real weapons and even got his own set of armor without having to borrow it anymore. During the Squire age, the young men were expected to master the seven points of agilities which consisted of swimming, riding, archery, fencing, tournaments, climbing, and wrestling. All of which led up to becoming a knight. At the age of 21, the squire finally had the opportunity to be knighted. This ceremony was called an accolade. The SCA holds accolades at several of their performances around the globe. They give us insight on the ceremony and how a squire is granted knightlihood. They even say the oath that would have been said at a real accolade during the middle ages, which reveals to one the amount of authenticity is put into the plays.

Although today we may not have the metal wearing, war heroes called knights like we did in the Middle Ages, The SCA gives us a great representation of what they were like at the time. They show readers the life they had and the challenges they face, all while staying true to the knightly characteristics that one had to possess. They are the modern day knights. 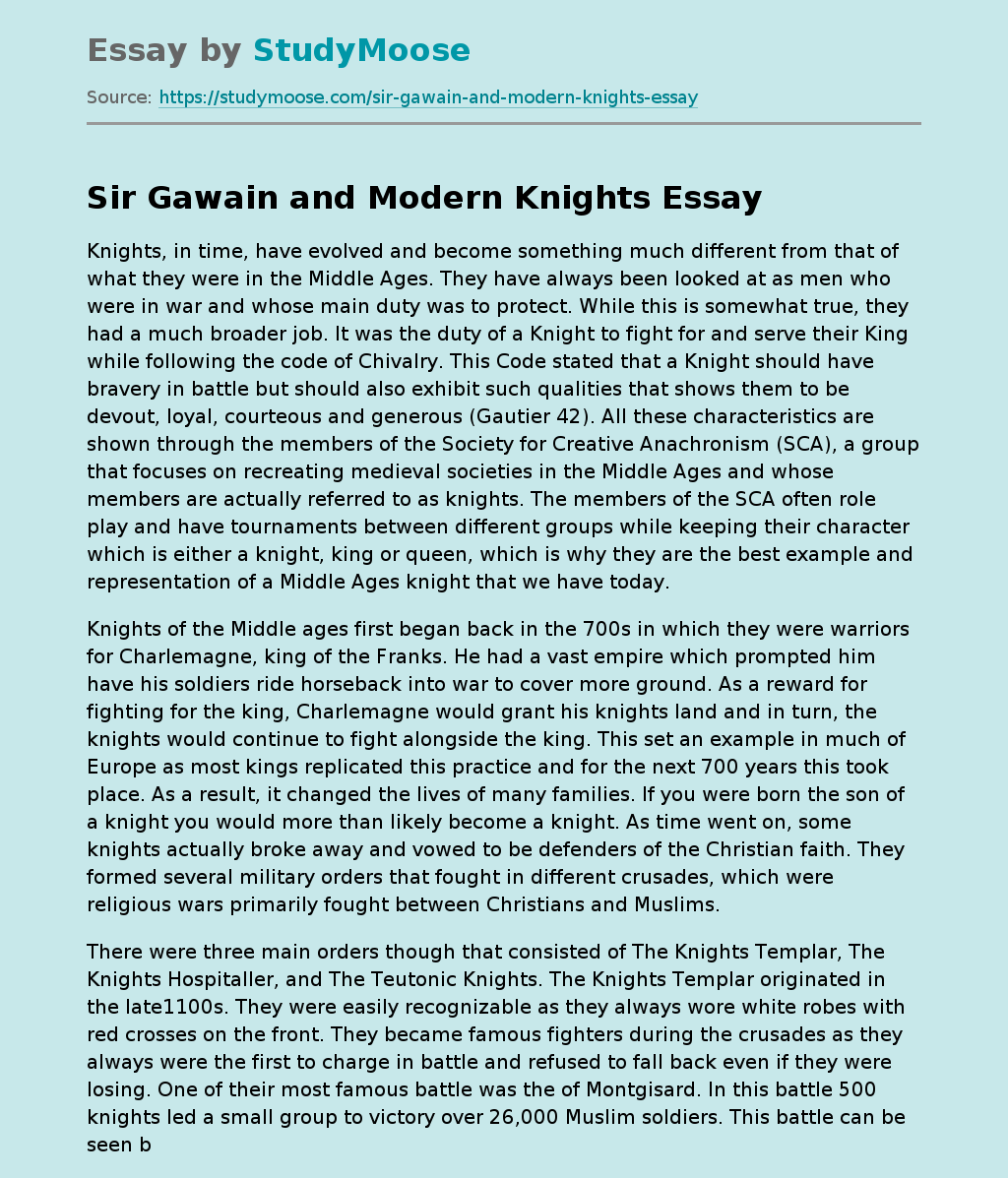