The aim of this research paper is to illuminate readers on Sir Arthur Currie’s exploits in Vimy Ridge, where this battle alone served as a lynchpin in winning the war in the Allies’ favour. An important connection between Sir Arthur Currie and the battle will be made to illustrate the influence he has had in Canada’s future on the international and cultural scene. Indeed, Vimy Ridge served as an important symbol, and it is a symbol which Currie’s genius has instigated because it was an unprecedented victory for the allied forces.

The paper will attempt to prove that Currie is one of the most important strategist during the war that helped make the Allies win because of his genius. It will close with new insight into the other side of Currie…

1.2 Background to and scope of investigation

A particular interest towards Canadian generals has sprung from researching about the First World. Indeed, it is fascinating to observe that the Canadians played a particularly important role during this war, which helped the allied forces to end the war rapidly and in their favour.

So, it was decided that research be conducted on one of the greatest Canadian generals of all time, to illustrate how Canada has come a long way from simply being a colony of Great Britain at the time, of course.

The general in question is none other than Sir Arthur Currie. He was a Lieutenant-General of the Canadian army, the first Canadian to have become a general.

Currie was chosen because of his influential presence and insight in the Great War. Considering the research conducted in order to find suitable candidates for discussion, he was the one individual who stood out from the rest of the available persons. Sir Arthur Currie’s story inspires individuals to achieve great things and surpass one’s self at all times. Hence, through his story, Canada’s story has also written itself for the better, despite his ups and downs. But this will be discussed below.

For the sake of this paper, a particular focus on Currie’s exploits in Vimy Ridge, and the subsequent impact on Canada that his achievements have instigated will be explored in detail. Also, the reputation he has gained and the legacy he has left behind cannot be overlooked, and will therefore also be elaborated on.

Thus, this paper will attempt to prove that Sir Arthur Currie’s successful involvement in the battle of Vimy Ridge served as a lynchpin to advancing his career to its highest point, and providing Canada a symbol that represents it on the international scene.

Answering the thesis of this paper will provide readers with a better understanding of how great men in Canada have part of their country into what it is at present day. It also provides the opportunity to remember those who have given everything to save their country and improve it in the process.

This paper is aimed at an audience which has, at minimum, a general insight into the Great War and the countries which participated, with at least some knowledge of the countries which were allied to Canada. Without this prior knowledge, topics, places, and some issues may confuse the reader into misunderstanding the message and the content of the paper. Hence, it is important to know a few details before the central idea of the paper is illustrated.

The first part of the research paper will provide the appropriate and basic information in order to make the readers clearly understand the context of research conducted and analyzed. This will consist of a brief history lesson of the Great War and a situational awareness of Vimy Ridge.

The second part deals with the researched content, and will consist of an introduction of to Sir Arthur Currie, dealing the pertinent aspects of his life, military career, and significance during the First World War. Then, this will provide enough information to move on to the third part of the essay.

Basically, this section will demonstrate the full event of Vimy Ridge, including the tactical and strategic genius of Currie, and relate it to the myriad of decorations and appointments that he earned during and after the war. After doing the latter, the framework for how this event and Sir Arthur Currie have changed Canada forever.

Lastly, the paper will show the reasoning behind naming Sir Arthur Currie as Canada’s greatest man of the time. 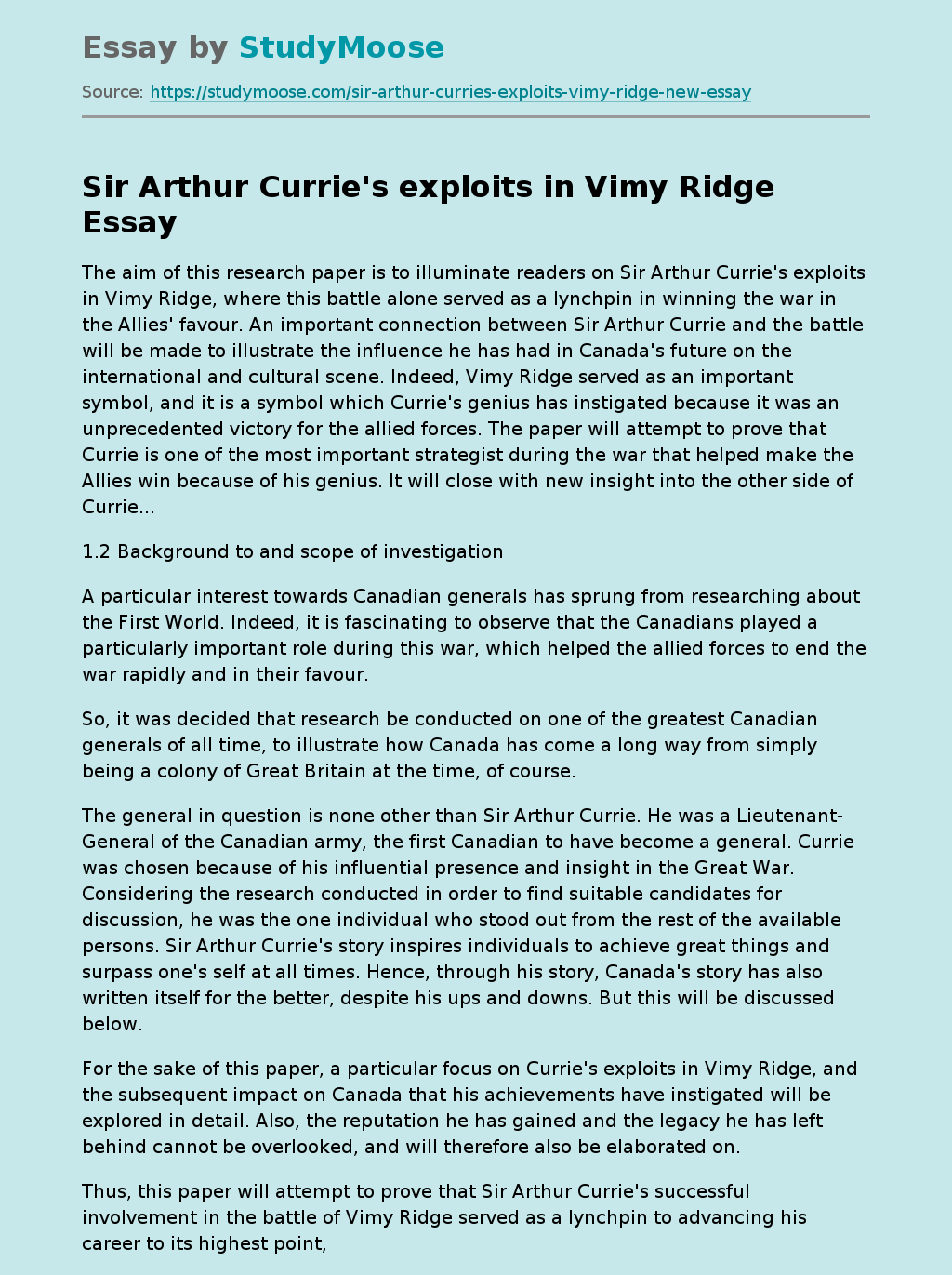