Paraphrase: Normally the nuclear family is the ideal family in American society, which consists of a husband, wife, and their children whom they had together. In today’s society there have been some radical changes in the country’s family structures. Most families now are single-parent families. Summary: Over the past couple decades; the choosing of being a single-parent family has become more common. The nuclear family is looked upon as the ideal family that now rarely happens. In today’s society the nuclear family consists of mother and step dad, or father and step mom and their children whom they had together or with someone else.

Turn in your highest-quality paper
Get a qualified writer to help you with
“ Single parent families ”
Get high-quality paper
NEW! AI matching with writer

However, children who come from single-parent homes have greater psychiatric problems than those who are from a two-parent family. In research at lease 80% of children come from fatherless homes. Summary: Children who come from a single-parent home have higher risks of poverty in their family, engage in more sexual activity, and have greater psychiatric problems. 80% of children come from fatherless homes.

3. Traditional Nuclear Family vs. Blended Family, By: Kristy Jackson. Paraphrase: In a traditional family consists of a married couple and then their biological children.

5. The Impact of Family Formation Change on the Cognitive, Social, and Emotional Well-Being of the Next Generation Paraphrase: Some people ask why Single-parent families put children at risk. Researchers have some theories to explain why children growing up with single-parents have elevated risks at experiencing cognitive, social, and emotional problems. When growing up in single-parent families, most will look to the economic and parental resources available to the children or the stressful events and circumstances to which children must adapt to. Summary: Regardless of family structure, the quality of parenting is one of the best predictors of children’s emotional and social well-being. Single-parent families find it harder to function then two-parent families. Most two-parent families are less emotionally supportive of their children, have fewer rules, harsher discipline, provide less supervision, and engage in more conflict with their children.

6. Worthen, Molly. “Single Mothers with Family Values.” New York Times. 27 Oct. 2013: SR.1. SIRS Issues Researcher. Web. 11 Apr. 2014 Summary: Since the rise of homes for fallen women and unwed mothers in the early 19th century, Christians have worried about their plight with a mixture of compassion and contempt. Today in 2014 conservative Christians see that god-fearing communities are not immune to unplanned pregnancy or divorce. Single mothers understand the family as a set of binding relationships crucial to human identity. Their commitment to traditional family values is all the stronger because they are raising children alone. Paraphrase: Un-planned pregnancy and divorce are some reasons why single-parent families have become common. Single mothers see their family as not complete; they understand the family as a set of binding relationships. When single women want a family their commitment to a traditional family values are all stronger because they have been raising their children alone.

7. Hymowitz, Kay, W. Bradford Wilcox, and Kelleen Kaye. “The New Unmarried Moms.” Wall Street Journal. 16 Mar. 2013: C.3. SIRS Issues Researcher. Web. 11 Apr. 2014. Summary: To many Americans the phrase “young single mother” usually pictures a teenage high-school dropout. But that image is now out of date. Teen pregnancy rates have been declining for decades. Today in 2014 a typical unmarried mother is a high-school graduate in her early 20s who may be very well be living with her child’s father. The tragic consequences are the same, children raised in homes that often put them at an enormous disadvantage from the very start of life. Paraphrase: In today’s society Americans believe the words “young single mother” is a women who got pregnant in high-school and dropped out. But really today in 2014 a typical unmarried mother is a high school graduate who probably lives with the child’s father. In today’s society this is more common than your average teen pregnancy relationships. Unfortunally children raised in homes like these often put them at enormous disadvantage from the very start of life.

Summary: Being a single parent leads to so many problems like Maintain a work life balance, dealing with inevitable emergencies, traveling for business, changing plans, getting personal time, finding child care for the night out, or even paying for child care. Not getting to spend much time with your child because you are a single parent could lead to problems for the child. Being a single parent can be hard to juggle, but then the thought of being a family means you are in it together. Some days might be filled with laughter and excitement, then other days might be horrible. Paraphrase: Not only does being a single parent affect the parent but of course the child. Not getting to spend any time with the mother or father, and not knowing the other parent could damage the child’s memory, or hurt them in some ways. Even though as an adult you have to maintain your work life, emergencies, traveling for work, changing plans because of the kids, trying to find that personal time, finding that child care for that one night out, or even trying to pay for child care, can still be hard on the parent and the child.

10. Young children and adolescents can respond differently to divorce, December 19, 2011 by Carl E. Pickhardt, Ph.D. in Surviving (Your Child’s) Adolescence Paraphrase: A divorce introduces a massive change into a life of a boy or girl no matter what age. When parent’s divorce that to a child is witnessing loss of love between parents, having parents break their marriage commitment, adjusting to going back and forth between two different households and their rules, and the daily absence of one parent while living with the other, all create a new challenging family circumstance in which to live which makes it hard on a child. Basically divorce tends to intensify the child’s dependence and it tends to accelerate the adolescent’s independence; it often elicits a more regressive response in the child and a more aggressive response when the child is in its adolescent stage. The child is always the dependent one, closely connected to parents who are favored companions, and really reliant on parental care. The adolescent world is a more independent one, more separated and distant from parents, more self-sufficient, where friends are their favored companion, and where their major focus of their social life now extends outside of family into a larger world of life experience. For a young child divorce shakes their trust in dependency on parents who now have become extremely undependable. They will divide the family up by “mommy’s and daddy’s” side. For a while creating unfamiliarity, instability, and insecurity, never being able to be with one parent without having to be apart from the other parent. Summary: A divorce on a child is the hardest thing they’ll ever have to go through. Divorce will make a child insecure, and confused. A child will normally put the divorce on themselves as it was their fault. It will intensify the child’s dependence on the parents. When divorce occurs in adolescent years it tends to accelerate independence, but also elicits a more aggressive response. When the child is younger they depend on their parents, but when the child is in its adolescent stage they are independent, they are more separated and distant from their parents, and more self-sufficient, where their friends will become their favored companion, where in a child their
parents are their favorite companion. 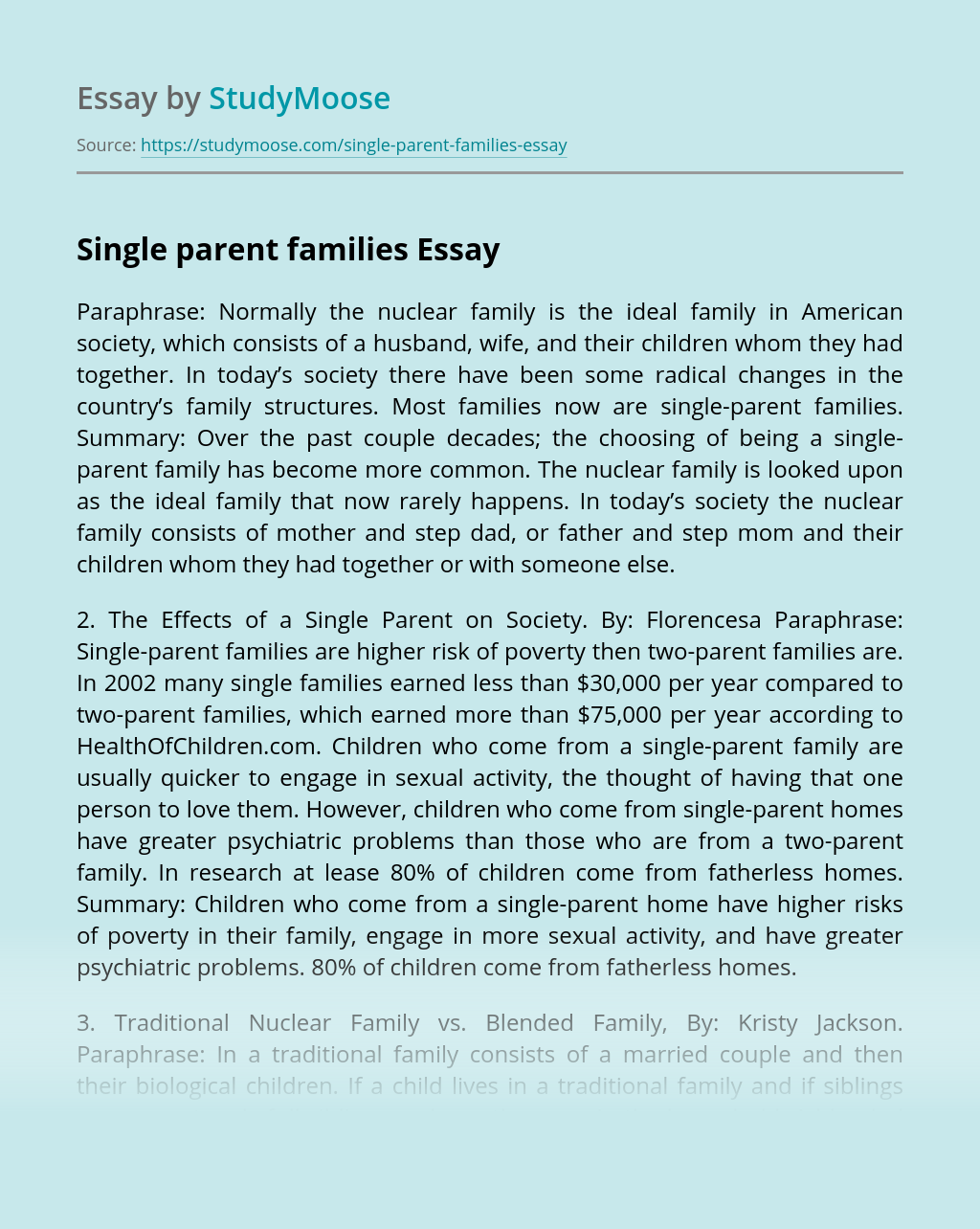 Turn in your highest-quality paper
Get a qualified writer to help you with
“ Single parent families ”
Get high-quality paper
Helping students since 2015
Stay Safe, Stay Original