In the novel Like Water for Chocolate, by Laura Esquivel, fire is used as imagery to symbolize the release of strong, intense passion by the characters of the novel. Fire as well as coldness ( which is used to describe the absense of passion) influences the way that the reader views the characters, Mama Elena, Tita, Pedro, Rosaura and Gertrudis and illustrates the love, lust and emotion that are common themes throughout the text.

Fire can be linked with two different ideals throughout the novel; one of passion and one of rebellion.

Don't use plagiarized sources. Get your custom essay on
“ Significance Of Fire In Like Water For Chocolate ”
Get custom paper
NEW! smart matching with writer

The imagery of fire represents the release of a passion so strong it can not be controlled. There are several examples of this throughout the text. For instance the first event were we see fire come as a result of passion is when Gertrudis consumes the rose quail.

“On her the food seemed to act like an aphrodisiac; she began to feel an intense heat pulsing through her limbs…she was on her way to market in Piedras Negras with Chencha, the servant, when she saw him coming down the main street, riding in front of the others…Their eyes met and what she saw in his made her tremble.

She saw all the nights he’d spent staring into the fire and longing to have a woman beside him,…her body was giving off so much heat that the wooden walls began to split and burst into flame…her pure virginal body contrasted with the passion, the lust, that leapt from her eyes, from her every pore.

”(pg.51-55) This passage describes the intense feelings of Gertrudis that she was finally able to release. The fact that Gertrudis had seen in Jaun’s eyes the longing for a woman like her, by staring into the fire. This image is used to show that he longed also for the release of passion, to experience the uncontrollable heat.

The imagery of fire in the novel also represents the escape of tradition, the use of free will to express the emotions that a character feels. Not only does the use of fire in the text have significance, the absence of fire, or cold also holds importance. Mama Elena embodies this cold that exists in the novel. Although there was once love in her life, now her life is loveless. She brings only coldness to Tita and takes away from her the only man that can release her “˜fire’. An example of this is the entrance of Mama Elena’s ghost. “A strong gust of wind banged the kitchen door wide open, causing an icy blast to invade the room…an icy shiver ran down Tita’s spine.

She turned around and was stunned to find herself face to face with Mama Elena…”(pg.172-173) Rosaura follows this cold. She marries Pedro without love and does it merely to please Mama Elena. Gertrudis, however lives through her free will, escapes the ranch and Mama Elena to fallow her passion. She has no use for tradition that she does not want to follow and this can be seen as a rebellion. Tita is caught between these two worlds of Rosaura and Gertrudis, fire and cold, however she wishes she could express her passion similar to Gertrudis. This can be seen after Gertrudis runs away with her soldier.

“Surely the heat from her body, which was inflamed by love…that was her dream.”(pg.60) Tita has the fire inside of her, however she is imprisoned by her fate, and the tradition that exists within her family.

From Esquivel’s use of fire as imagery in the text, it is easy to examine the way one views a character and whether we identify with that character or not. Gertrudis has enormous fire and passion within her that she is able to release as a result of eating the rose quail. However Rosaura represents a lack of passion, a subordinate to tradition and Mama Elena’s words.

Throughout the text Tita finds herself caught in the middle of this fire, or the coldness that is an outcome of the absence of it. Due to her fate, Tita is forced to live her life without passion, she is forced to live more like Rosaura. However, within her exists fire, a passion that is only expressed when she is with Pedro. The symbolism of fire and cold( the absence of it) creates a standard by which we judge the characters in the novel. By using passion in association with how one feels about a certain character Esquivel creates categories in the readers mind.

We are attracted to the characters that generate this heat and passion, the characters who basically live through their emotions. Because the novel is a romance, and based on the way it is written, the passion and emotion are seen as acts of intense love that one is bias towards. This is also the reason why we, as readers want Pedro and Tita to end up together, because Tita only can feel her passion and express her fire when she is with Pedro. We do not want Tita to feel cold, the way she feels when she is without Pedro due to the romance genre.

These categories of good and bad, fire and cold, cause the protagonists to lack dimension however add dimension to the character of Tita. Because the reader is inclined to sympathize with characters who are associated with fire, one neglects to look deeper and examine their flaws. We merely see everything in black and white, there are no gray areas. With Tita however, it is evident that she has more than one side to her because through the text is described the ways she can represent cold as well as the fire and passion that exists in her soul. For example, she feels a coldness when Pedro is not with her or when he dies at the end of the novel. “She would have to find some way…of striking a fire that would light the way back to her origin and to Pedro. But first she had to thaw the freezing chill that was beginning to paralyze her.”(pg.244) This quote illustrates the way that only Pedro can make her feel warm and the “˜freezing chill’ represents the absence of passion that she feels.

Significance Of Fire In Like Water For Chocolate. (2016, Jul 16). Retrieved from https://studymoose.com/significance-of-fire-in-like-water-for-chocolate-essay 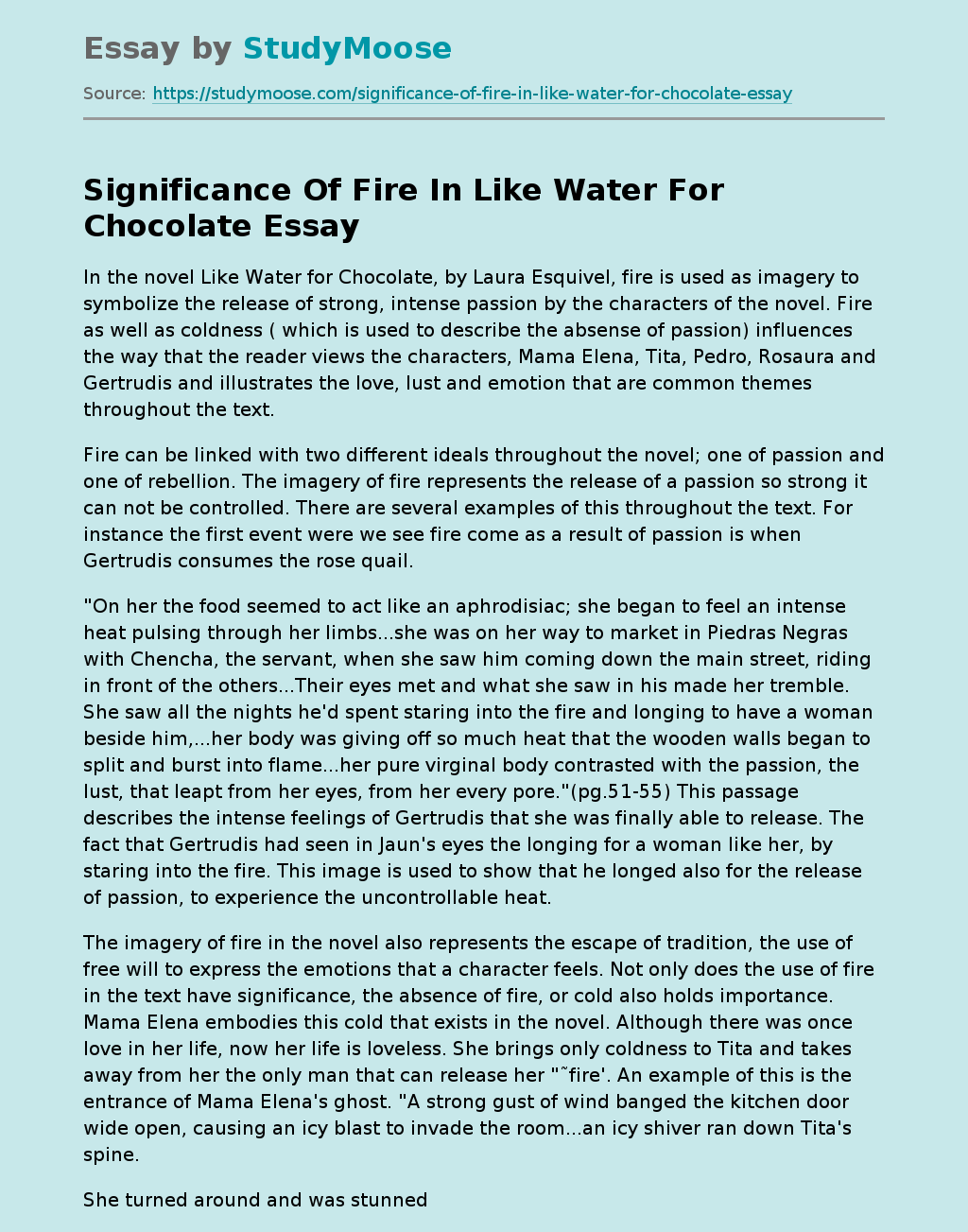