Laura Esquivel’s Like Water For Chocolate and Milan Kundera’s The Unbearable Lightness of Being are both very different novels, but within both written pieces there are similar concepts where motifs and spiritual realism are used to emphasize how character relationships influence rebelliousness. Focusing on the two protagonists and their mothers, the will of rebellion against family and family tradition is shown in both Tita and Tereza. By the authors’ use of restriction and constant surveillance within the mothers of the two girls, and emphasis on constriction both have towards their children, explains the daughter’s will of wanting to escape.

Don't use plagiarized sources. Get your custom essay on
“ Laura Esquivel’s Like Water For Chocolate ”
Get custom paper
NEW! smart matching with writer

To go in further detail, the authors’ use of character impact is shown in the form of spiritual realism, in which Tita’s mother reappears as an apparition, and motifs, where Tereza mother constantly appears in her dreams, again emphasizing the heaviness the two mothers impose on the two protagonists.

In both novels the characters Tita and Tereza are clearly influenced by their mothers.

Whilst the restriction Tita receives comes with family tradition, Tereza is forced to be equal to everyone else. Both characters disagree with the ideas thus indicating the start of a rebellious attitude. The mothers of both girls use them to vent their anger; though Tita’s mother completely disowns her, both mothers do rely on their daughters to stay with them whilst living at home. As seen when “one day [when Tereza’s] mother phoned to say she had cancer and only a few months to live”(p.

57). Tereza has already left her mother for Prague and it is seen that it was a lie and that ” Tereza’s mother had never been suspected of having the disease” (p.58) This shows that though Tereza’s mother who was cruel and harsh constantly needed Tereza near her, and that she would lie to get the thing which was her outlet for her anger back.

But with Tereza gone the possibility of looking in one’s reflection and not only seeing her old self but the woman who ruined her whole life had caused her to want Tereza back and so she can continue with the loathsome attitude and once again vent her anger and disappointment on Tereza. Same with Tita, whilst she still lived with her mother, there was always the need for her to be where Mama Elena was. As equal in harsh attitudes with Tereza’s mother, Mama Elena was cruel to her daughter but still expected Tita “to take care of [her, Mama Elena] until the day [she, Mama Elena] die[d].”(p.14) Certain places it is obvious that for Mama Elena Tita had become a tool in which she used to reenact what had happened to her on others as “she wasn’t allowed to marry”(p.125) the man she loved and that she would do the same to torture Tita though the reason was she wasn’t allowed to marry was due to Juan, her lover, having “Negro blood in his veins”(p.125) but similarly related to family tradition. This shows the reader that throughout Tita’s life she was told the fact that she “couldn’t marry and have children”(p.14) and that she couldn’t leave her mother’s side until the day she died.

Tita and Tereza both are classified as rebellious characters differently, but what they share is the will to break free from their families told not being rebellious directly. Tereza’s rebelliousness is subtle until she leaves, but whilst she is in her mother’s care, her form of rebellion was when she looked at her reflection in the mirror and trying to look past her physical appearance and look deeper at her soul. Kundera lets the reader understand that by looking into the mirror, Tereza could sense herself as freedom away from the constrictions of the human body in which her mother bound. “…she thought she saw her soul shining through the features of her face…Staring at herself for long stretches of time, she was occasionally upset at the sight of her mother’s feature in her face” (p.39) The fact that Tereza “was occasionally upset at the sight of her mother’s feature in her face” goes to show that she would always be bound by her mothers genes on the outside and because Tereza is trying to separate the body and the soul, the rebellious attitude is seen subtly. In many senses this shows that she wanted to be different from her mother, not being vulgar and “immodest” Though constantly being told that her body is indifferent to everyone else she never wanted to be the same and that is when the reader sees the signs of defiance in the action of Tereza standing in front of the mirror.

Though both characters from both novels are subtle in their actions in comparison to Tereza, Tita’s form of rebelliousness is seen through sewing but Esquivel also enables the reader to see it through her cooking starting out small but gradually growing to an out burst against her mother. “What passed for communication between them resumed when Mama Elena, who was inspecting the clothes each of the women had been sewing, discovered that Tita’s creation, which was the most perfect, had not been basted before it was sewed. “Congratulations,” she said, “your stitches are perfect-but you didn’t baste it, did you?” “No,” answered Tita, astonished that the sentence of silence had been revoked…”Are you starting up with your rebelliousness again? It’s enough that you have the audacity to break the rules in your sewing.” (p.15) The sewing scene is very important because this is when the reader is given the realisation of Tita’s situation with her mother understanding the two aren’t on good terms. The emotions within Tita’s food are first seen with Rosaura’s wedding cake. “The moment they took their first bite of the cake, everyone was flooded with a great longing,” (p.39) this shows that her emotions were flooding through the food though Mama Elena told her specifically to not show grieve on the day. “I won’t stand for disobedience,” Mama Elena told her, “nor am going to allow you to ruin your sister’s wedding, with your acting like a victim. You’re in charge of all the preparations starting now, and don’t ever let me catch you with a single tear or even a long face, do you hear?”(p.28)

In both novels the authors touch on how even after the children leave the mothers the two are still affected by them which shows the strong influence the mothers had on both Tita and Tereza. To do so the author uses motifs and spiritual realism involving the mother for instance, the spiritual figure of Mama Elena coming to Tita and then dispersing into a fireball burning Pedro because of Tita’s “sins”. “The little light, all that was left of Mama Elena’s image, began to spin feverishly…The firecracker moved fast, approaching Pedro, whirling crazy, with enough violence to make the lamp closest to him explode into a thousand pieces. The oil quickly spread the flames on to Pedro’s face and body,” (p.180) The fact that mama Elena still haunted Tita after her death shows the strength of the idea of not being let free until Tita herself sets herself apart claiming stating “I won’t put up with you! I hate you, I’ve always hated you!’ (p.180)

Though Tereza doesn’t say this directly to her mother, as she finds happiness between her and Tomas, the peace between them supposedly removes her mother from her dreams. Though there is no direct quote, Kundera just stops mentioning the mother as the story progresses and shows the change in which Tereza takes place. When given in depth about her dreams and her visions where she was “ready to dismiss the crew of her soul from the deck of her body; ready to descend to a place among her mother’s friends and laugh when one of them broke wind noisily; ready to march around the pool naked with them and sing,” (p.56-57) It shows that she is still conscious about her body though she has left her mother’s home and is with Tomas and by still separating her “soul” from her “body” goes to show that her mother had a great impact on how she viewed herself even after she was separated from her. Kundera takes this in tact and uses it to help bring forth the idea of rebellion and constriction because as stated earlier Tereza was always disgusted with her physical form relating it to her mother stating that “she was occasionally upset at the sight of her mother’s feature in her face” (p.39)

All in all within both books the characters of Tita and Tereza are both oppressed by their mothers and by being so, rebellious attitudes to family and it’s tradition start to grow and continue to throughout the two books until that bubble in which they had been trapped in is broken. The use of spiritual realism in the form of Mama Elena and motifs in which Tereza’s mother appeared as a dream emphasise this and bring the reader to come up with this conclusion

Laura Esquivel's Like Water For Chocolate. (2020, Jun 02). Retrieved from https://studymoose.com/laura-esquivels-like-water-chocolate-new-essay 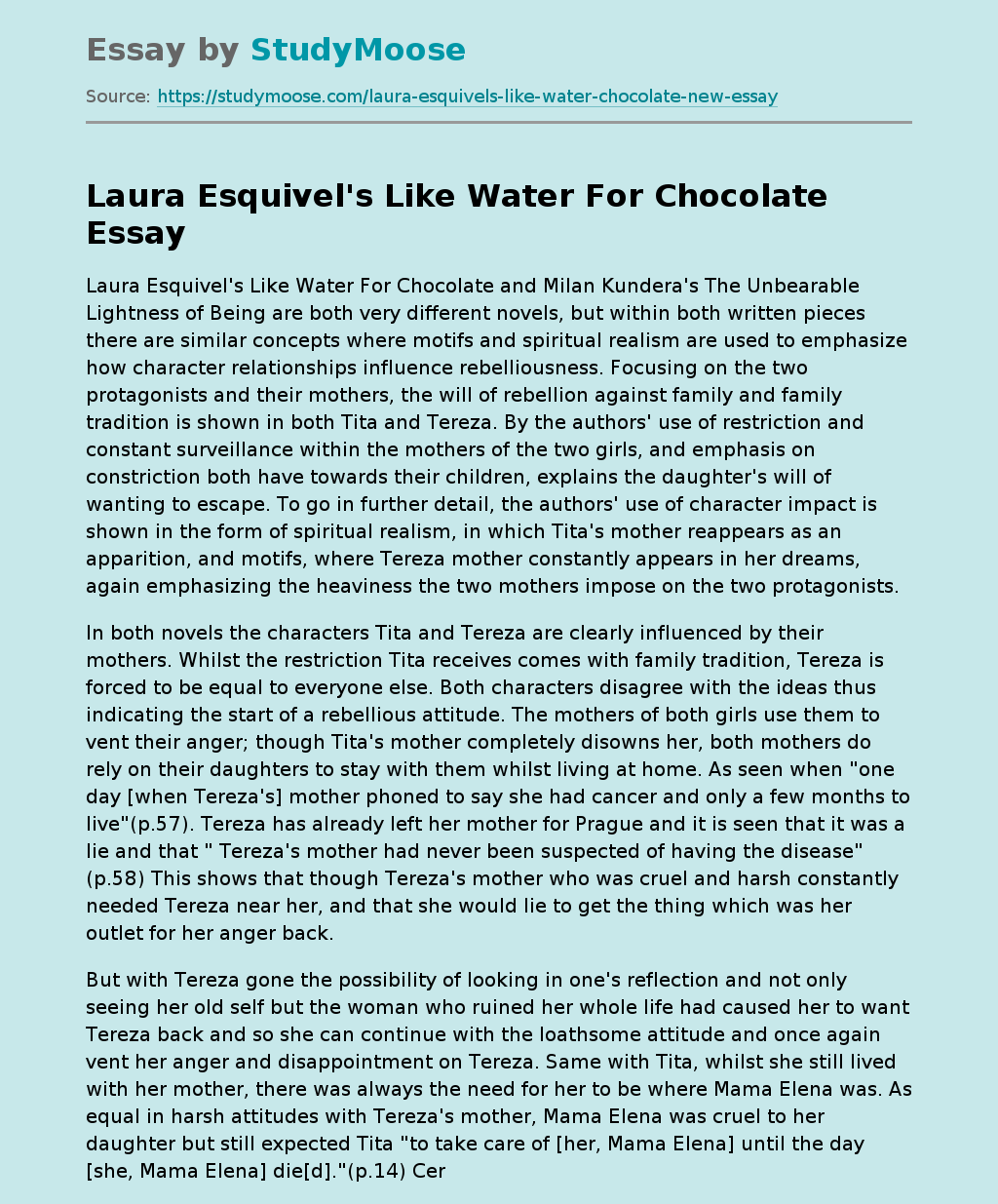