"Like Water for Chocolate" & "Chronicle of a Death Foretold"

“Like Water for Chocolate” & “Chronicle of a Death Foretold”

Have you ever been threatened by societal influences that dictate the way you lead your life? Portrayal of society insensibly places an important role in our lives because we often allow ourselves to be governed by the general public’s perspectives and criticism. How we see ourselves is not nearly as important as how we are seen in the eyes of the beholder. For example, teenagers habitually parade their new electronics such as a phone or a MP3 player because those material things are what appear to define themselves in the eyes of other.

Don't use plagiarized sources. Get your custom essay on
“ “Like Water for Chocolate” & “Chronicle of a Death Foretold” ”
Get custom paper
NEW! smart matching with writer

Thus we periodically seek the help of an outsider to identify ourselves. However, these influences could positively boost your ego or turn you into a victim of society. As Laura Esquivel keenly points out in Like Water for Chocolate and Gabriel Marquez’s Chronicle of a Death Foretold, the protagonists in both novels are turned into victims of society due to an array of societal influences.

In both stories, the significance of family duties, honor, and guilt have influenced Tita de la Garza in Like Water for Chocolate and Santiago Nasar in Chronicle of a Death Foretold.

The array of similarities that connect both stories

There is an array of similarities that connect both stories. One of which is the vital family duty that the protagonists in Like Water for Chocolate and Chronicle of a Death Foretold are asked to maintain. Tita de le Garza has a responsibility to fulfill for as long as her mother is alive.

The family tradition mandates that the youngest daughter is responsible for taking care of her mother. According to this tradition, Tita is not allowed to be married due to her role. When Tita seeks love and happiness elsewhere away from home she was lucky to find it within Pedro.

However, luck was not always on her side. When Pedro comes to ask for her hands in marriage, he was denied. As a result, Tita once again fell apart but Tita has no one else to blame but her cursed and unfortunate destiny of being the youngest daughter, having to take care of her mother until the day her mother dies. In turn, Angela Vicario’s situation in Chronicle of a Death Foretold was quite identical. Angela is the only daughter in the Vicario family and she is expected to get married as a virgin. As society is portrayed in the novel, women are expected to be virgins and pure until they are married.

The shared degree of guilt that both novels present

With this in mind, Angela’s familial duty is to maintain herself as a virgin until she is married. Nevertheless, Angela failed to fulfill her family duty when she conducted a premarital sexual relationship. As a result, her family is dishonored under her name. As the story descends, an additional significance is manifested. Readers can see the shared degree of guilt that both novels present. In Like Water for Chocolate, guilt arises from many angles. One of which presented by Esquivel is the cruelty that Mama Elena, the antagonist, places upon her daughter, Tita.

Since the day Tita was born, her life was confined in the kitchen where she utilizes her cooking talents to fulfill the needs of others and sometimes seek contemplation within herself. After her marriage with Pedro is denied, she was asked to prepare her sister’s wedding with Pedro. Tita gets beaten every time she attempts to speak her mind due to the level of obedience that Mama Elena has established in the De la Garza family. As the head of the family, Mama Elena dictates the way Tita’s life should be. Although the idea is not revealed in the novel, one can sense the guilt that Mama Elena should have felt.

An act of victimization

All the troubles she has caused Tita soon turned into an act of victimization and Tita, once again is a victim. Likewise, Chronicle of a Death Foretold presents the similar significance of guilt yet it is presented differently. After Angela Vicario was dishonored, she was asked to disclose the name of the man who abducts her virginity. Without a doubt, she blamed the responsibility on Santiago Nasar, who is completely innocent. Yet Angela did it because no one would dare to harm Santiago with his reputation. However, Angela is quite wrong. Once her brothers found out, Santiago was their next victim.

The death of Santiago Nasar is caused by Angela’s wrong accusation. In the long run, guilt is once again the mother of victimization. Aside from guilt and family duty, the characters in the novels were also victimized by the code of honor. Mama Elena in Like Water for Chocolate is a very strong female character that praises family tradition that carries a great deal of honor. Being the head of the family, Mama Elena instills obedience in her daughters. Though her daughters wanted to rebel, they did not because they respected and honored their mother. Furthermore, it was how society was portrayed- children are compelled to obey their elders.

Chronicle of a Death Foretold is not very distinctive from this particular scenario. The dilemma derives from a lie disclosed by Angela Vicario that dishonors the Vicario family. When Angela was asked who took her virginity, she revealed that it was Santiago Nasar. After the Vicario brothers heard the shameful news that their sister’s virginity was hauled by Santiago Nasar, they immediately wanted to give him a punishment that he deserves. The death of Santiago served two purposes: it is intended for Angela to get her code of honor back and moreover, it is the only way for the Vicario family to get their honor back as well.

All in all, one could clearly see that it is not difficult to be victimized by society. How society is portrayed has a big impact on one’s personal identity. If one is not strong enough, one will be victimized by portrayal of society because human beings strive to be perfect in the eyes of others yet not our own. As we have seen the manifestation of guilt, honor and family duty and their significance in our lives presented by Marquez and Esquivel, we can see how portrayal of society plays a big part when it comes to identifying ourselves.

Tita was victimized because she allowed her mother to dictate her life. Moreover, she could not marry the person she loves all due to the family tradition that Mama Elena established. In the corresponding novel, Santiago Nasar is also victimized by a lie that caused him to be murdered. Although it was an act of cruelty, it was needed for the Vicario to obtain their code of honor and blend in with the Utopian ideal of society. It is not easy to control our destiny but it is possible. Be strong to yourselves and you will not be a victimized by portrayal of society.

"Like Water for Chocolate" & "Chronicle of a Death Foretold". (2020, Jun 02). Retrieved from https://studymoose.com/comparative-study-9220-new-essay 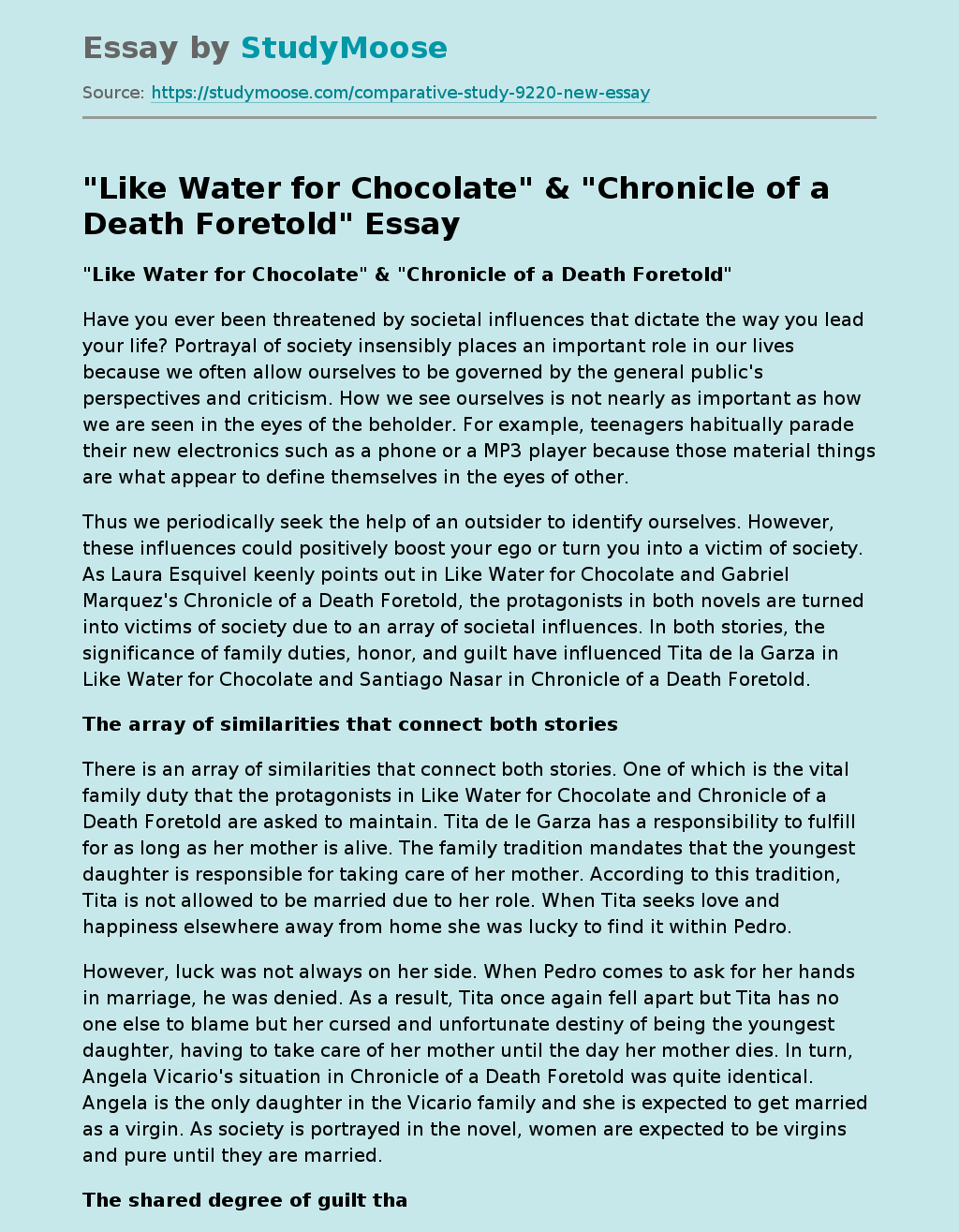