The main point that Michael Moore is portraying in his documentary is that the North American health care system does not have the best interest for it’s customers in mind.

The corruption of the health insurance companies go beyond the denial of treatment for its patients. Moore builds a strong argument for the healthcare systems of other nations such as Canada, and France. He builds a very convincing argument, however; Moore plays on the emotions and uses pathos to strengthen his arguments rather than reason. Many of the examples that Moore uses in his documentary are very dire cases of helpless families that are refused treatments from their health care providers.

Instead of choosing examples that the average Americans may face, Moore uses extreme cases to play on the emotions of his audience to more effectively get his point across.

He uses many dramatic effects such as interviewing family members of a patient that is not being granted treatment to more fully add emotion to the documentary. Moore also uses cases of elderly patients and veteran further add dramatic effect. Overall, Moore persuades the audience on his argument as opposed to using reason to convince his audience. His style is effective for playing on the audience’s emotions by using dramatic effect. The documentary supports its arguments using emotions to persuade rather logic and reason to convince.

The purpose of Michael Moore’s gut-wrenching documentary Sicko was to inform the audience of the corruption of the North American health care system. It also persuades the audience that a socialistic system of health care is more beneficial to the patient. Moore’s documentary contains multiple examples of the corruption of the health care providers in America. For example, a firefighter was denied coverage by his health insurance after he was injured rescuing people in 9/11. There are many other cases featured in the documentary of insured people being denied coverage. Moore also shows the political side of the health care providers.

He explains that healthcare companies sponsor politicians that will be beneficial to their companies if elected. Moore uses this information to inform his audience, however; throughout the documentary Moore compares the American capitalistic health system with other countries’ socialistic systems. After informing the audience of a patient being denied treatment, Moore gives an example of the free healthcare in other countries. For example, Moore shows a man visiting Europe that broke his arm and was treated for free under the socialistic healthcare system. Michael Moore’s purpose in making this documentary was to inform and persuade the audience of the corruption of the American Health care system.

This documentary was very interesting for me. The healthcare system in America is controversial right now and it is a topic I am still trying to understand myself. While this documentary did clarify some confusion for me, it did not remove it all together. Moore was very convincing in his arguments, but they were flawed. He is biased toward the socialistic healthcare system and did not portray any negative effects or circumstances with the socialistic system. The documentary contains extreme examples of patients not being insured that are not that relate able as an audience member. Sicko by Michael Moore is a moving and poignant documentary, but it is also biased and his persuasion tactics are easy to identify. 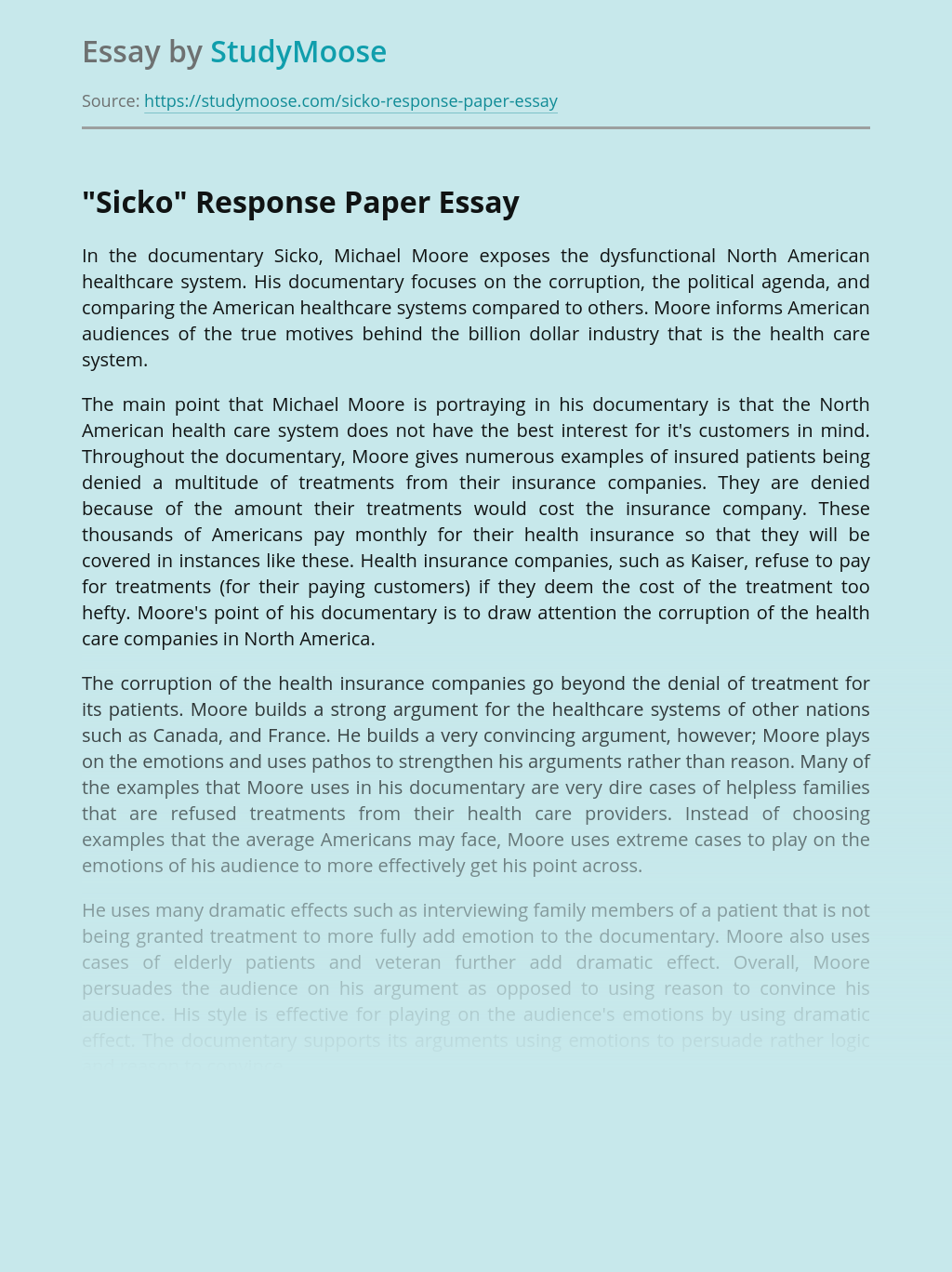