The short story ‘A Worn Path’ by Eudora Welty emphasizes the importance of patience and persistence. The protagonist of the story, a very old African-American woman, Phoenix Jackson is presented by the author as a study in perseverance, stamina and life in the face of hardship and death. The story is rather deceptively simple and deals with an old woman’s journey on foot through the woods of Mississippi to the city of Natchez, motivated by the need of medicines for her ailing grandson.

However, structured upon this journey motif, the story has a rich veneer of symbolism that turns Phoenix Jackson an everyman, while her journey, transcending every boundary becomes the very emblem for the eternal human quest through the wildernesses of life. The landscape that the protagonist has to cross to reach her destination is at once evocatively beautiful and hauntingly dangerous, threatening at every moment to jeopardize the journey.

The old and worn out woman is acutely aware of the dangers and hardships that lie in her way and as she walks steadily she mutters under her breath: “Out of my way, all you foxes, owls, beetles, jack rabbits, coons and wild animals… the big wild hogs out of my path.

Don’t let none of those come running my direction. I got a long way. ” Her feet feels chained as she negotiates a particularly steep uphill path and gets entangled in a thorny bush that looks harmless from the distance.

As soon as she overcomes this other impediments follow: narrow logs across a creek, ghosts which turn out to be nothing but scarecrows, dog and his white master crosses her path.

But she braves it all with a determination and patience that bespeaks of the invincibility of the spirit that burns within her breasts. The solitary journey of the protagonist through the wildernesses is further complicated by her old age, her acute physical exhaustion and her failing vision.

However, walking against these innumerable odds, Phoenix Jackson emerges victorious with the aid of her sheer fortitude and capacity for self-sacrifice for the sake of her grandson. Even when a bounding black dog pushes her over into a ditch, Phoenix Jackson does not lose her infinite patience. In fact lying by the roadside in a ditch, incapable of getting up on her own, she seems quite happy and soon loses herself in a dream and goes on talking to herself.

After being rescued, she calmly declares the rationale of her journey to the hunter who advises her to go back home: “I bound to go to town, mister,” said Phoenix. “The time come around. ” The protagonists zest for life is revealed in her intense awareness of every natural object around her and the wilderness seen through her failing eyes, takes on a dream-like quality; a dream in which every object quivers with symbolic or allegorical significance.

The real journey transcends its limits to reveal a religious pilgrimage or a quest with Phoenix Jackson as the lonely knight whose only true weapons against adversities are her infinite patience and persistence. Interestingly, the story is actually set during the Christmas season, suggesting that the protagonist is out on a pilgrimage where her endurance and fortitude will be tested to the extreme. The theme of patience and persistence is also reiterated in the mythological significance of the name, Phoenix, a bird that rises again and again from its own ashes asserting the victory of life over death.

It is to be noted that it is not only the natural world that poses an obstacle for the old protagonist, but the society too that refuses to giver her the due respect. Thus we see the White man condescendingly concluding that she is going to the town merely to see Santa Claus or the nurses at the great big building dismissing her as a case of ‘charity’. But all these barely touches the old lady, who has surely earned the medicine a thousand times over; the medicine that is given away to her as ‘charity’.

She once again walks out into the street starting her long journey back home through the wilderness. Thus it might be concluded that Eudora Welty’s A Worn Path is a powerful assertion of the victory of the human spirit against all conceivable odds. The victory is undoubtedly hard earned, neither does it promise much spoils (the old woman is rewarded with a paper windmill and medicine for her grandson at the end of her almost epical journey). But it is a victory of patience and persistence. The battle too is worth fighting whatever be the spoils. 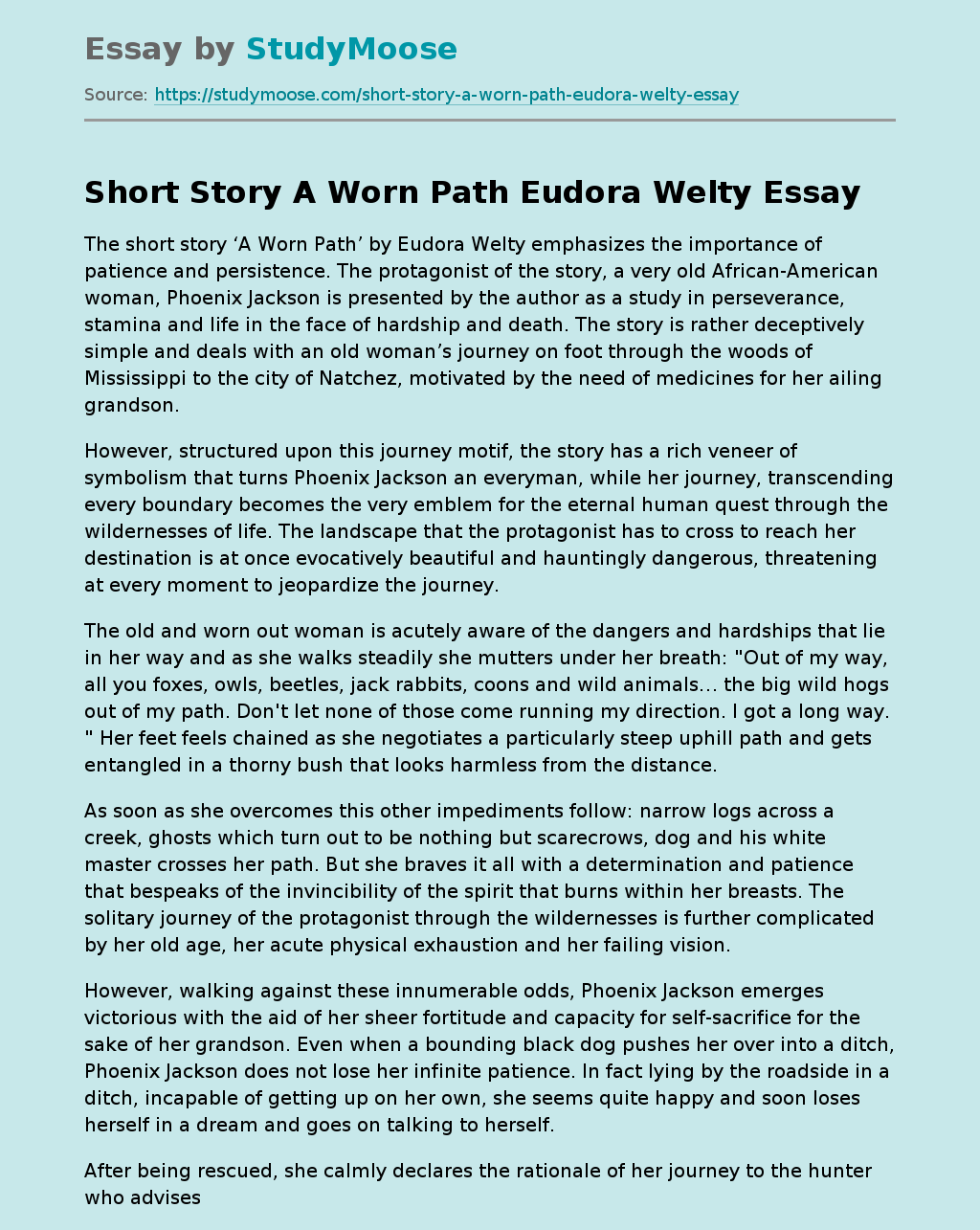