When looking at the graphs to show how the Shirley tomato plants grew, it is clear to see how each plant differed according to the feed used. Plants 1 and 2 were fed with Tomorite, plants 2 and 3 with Bio and plants 5 and 6 were controlled (only the nutrients found in the soil). From the ratios, we can see that Bio has three times the amount of nitrogen as Tomorite. In addition, Tomorite has double the amounts of phosphates and potassium as Bio. Soil naturally has a certain amount of nutrients but there are also other elements found within it that may affect the results.

Below is a table stating the ratios of the nutrients.

In the graph (fig.1) to show the internodes length for every plant, there are regular patterns of which they follow. In plants 1, 2, 3 and 4, the top internode has the largest length, the middle internode is slightly lower than the highest and the bottom internode has the shortest length.

Overall, plant 4 had the largest internode length; this may have been caused by the ratio of nutrients. The Bio feed had equal amounts of potassium and phosphates but over double the amount of nitrogen.

Nitrogen is needed for the synthesis of proteins, enzyme formation and for growth of leaves and the stem. Nucleic acids produce proteins, carry genetic information (DNA) and nitrogen is found in chlorophyll (for photosynthesis). A lack of nitrogen causes stunted growth and yellow older leaves. It appears that an excess amount of nitrogen has resulted in long internodes and less room for flowers.

As explained earlier, nitrogen helps in protein synthesis, so more plant material can be formed; this is why the Bio fed plants grew the tallest.

The results shown on the graph show how the amount of NPK (nitrates, phosphates and potassium) can alter the growth of internodes. The table below shows the average of the plant’s results and the percentage difference compared to the control feed.

In the graph (fig.2) to show the yield of ripe fruit on The 18th of July, we can observe the huge differences between the plants due to their feed. Plant 1 has the most ripe fruit, while plant 5 had the least. This may be because plant 1 has a higher a ratio of phosphates and potassium in comparison to the probably low ratios in plain soil.

During photosynthesis, glucose is produced and phosphorous is added to activate it before it is broken down in respiration. Fruits store glucose, which is why they taste sweet. A shortage of phosphates would cause poor root growth and purple younger leaves. Phosphates are one of the nine minerals and essential elements (macroelements) required in relatively large quantities for adequate growth.

Phosphates are also a constituent of plasma membranes called phospholipids. Phosphates are important in respiration, photosynthesis and ATP production. ATP (adenosine triphosphate) is required to release quick energy from glucose; it is an energy carrier for the cell.

This energy is used for metabolic reactions and ATPase enzymes cause ATP molecules to lose a phosphate group and release energy. 30.7 KJ of energy is released to power chemical reactions. The extra phosphate can be reused to make ATP during phosphorylation.

Potassium activates the enzymes needed to catalyse the synthesis of ATP, so phosphates and potassium are related in the same process. Potassium helps enzymes in photosynthesis and respiration to work. A shortage of this nutrient can cause yellow leaves with dead spots. Therefore, the combination of phosphates and potassium help plants fed on Tomorite to produce the most flowers, which then develop into fruit and produce the biggest yield.

There is a pattern with in the graph as plants 1 and 2 grow the most fruit, then plants 3 and 4 and finally plants 5 and 6 have the least. The plants that had a type of feed had a stronger yield. Below are the averages of the plants and the percentage difference compared to the control feed.

Another way to use the above data is to find the percentage difference to the controlled plants (no feed).

The plants that did have the most trusses were fed with Bio and Tomorite. These feeds had a higher concentration of nutrients than the soil this explains the findings.

Lastly, I will look at the graph showing the number of flowers set on the 11th of July (fig. 4). Plants 1 and 2 are the highest overall, this could be expected as the feed (Tomorite) was made especially for tomatoes. Plants 1 and 2 had a sufficient ratio of nitrogen, phosphates and potassium. Plants 3 and 4 were also had quite a high number because of their balance of nutrients, whereas plants 5 and 6 were lower.

The students originally predicted that Tomorite would produce the heaviest yield and have shorter internodes with more flowers per truss. This is because they thought that phosphorous and potassium would encourage the flowers and not result in excess internode and leaf growth as with the Bio feed. Their hypothesis also stated that they predicted the control to be the same at the start but then slow down as the bag runs out of nutrients.

My hypothesis was much like the students prediction, as I believed that Tomorite would produce the best plant as it had the most suitable ratio combinations of nutrients. My results support the initial prediction as we can establish from the graphs that Tomorite had the highest number of flowers, a decent height, the greatest yield, a good internode length and sufficient number of trusses. 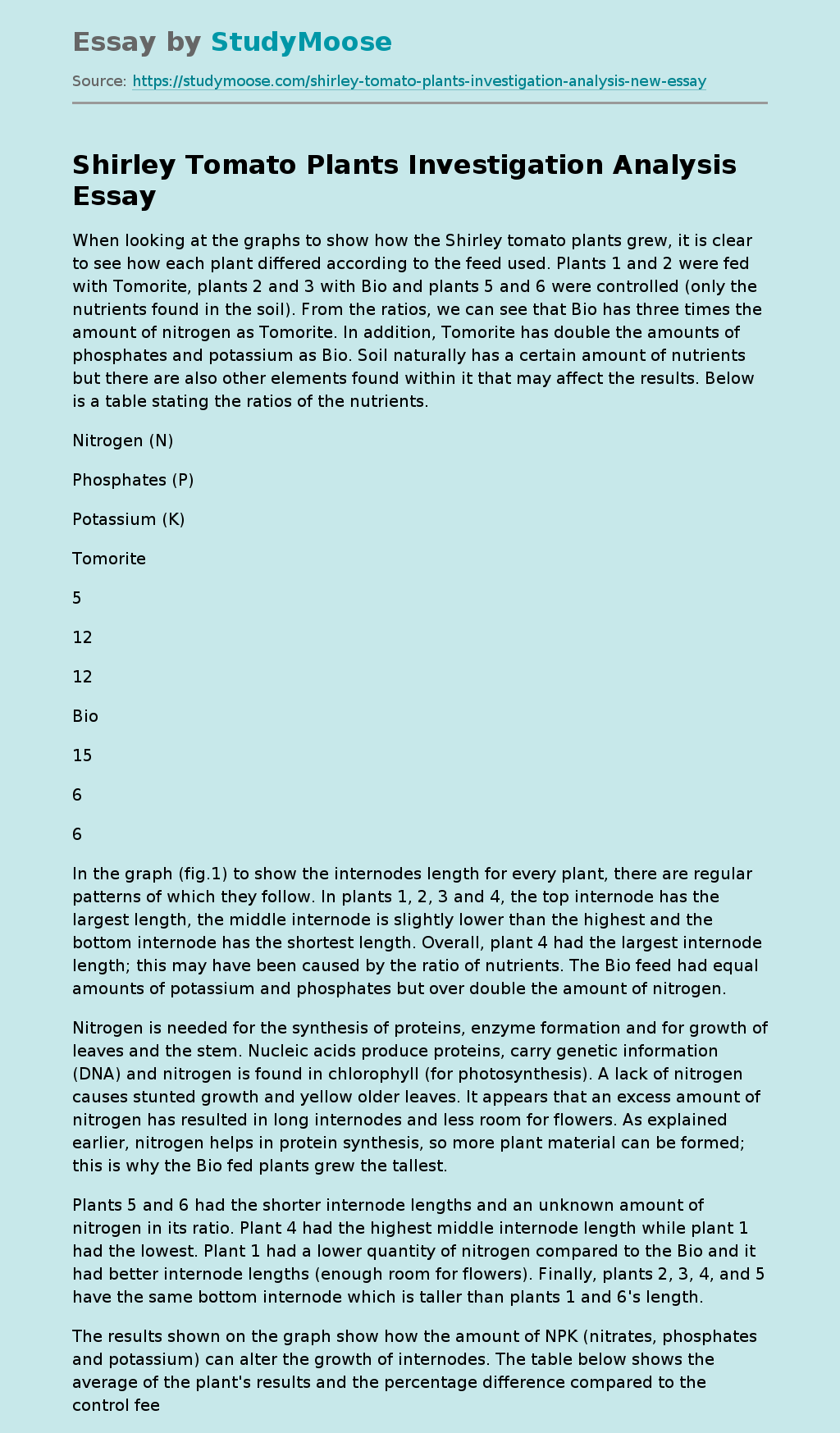