Miyamoto is a Japanese game designer, famous for his well-known works such as Mario, Donkey Kong, The Legend Of Zelda and much more, therefore he works in the Product area. The New Mario Game – Designed by Miyamoto One of his well known designs is the worldwide-known Mario, the lovable heroine was originally created by Miyamoto. This character was then adopted into 3D – 2D platform games, escalating into a movie and to what it is now. Miyamoto is also the designer of Wii series; this is a picture of him illustrating the Wii U.

Miyamoto talking about the Wii U Within early childhood, Miyamoto grew up in a small country town of Sonobe, in Japan. The young boy had no access to a television, thus spending more time on exploring the rural area of his town. One day, in his usual adventures, he discovered a large series of caves. As a curious child, he lit a lamp and ventured inside. In elementary stage, Miyamoto had interest in conjuring objects that would surprise or shock everyone.

Considering this interest, he began to have thoughts about becoming a puppeteer or a painter, soon later he started creating and making toys. After graduating within five years, Miyamoto studied in the area of Industrial Design, in Kanazawa Munici College. Miyamoto’s Quote that explains and highlights his imaginative thoughts and beliefs At the age of 24, he requested his father to organise a meeting with an old friend from the company of Nintendo, Hiroshi Yamauchi.

Yamauchi then asks for a few designs, after being surprised by the male’s work, he recruited Miyamoto into the company, taking place of the first staff artist.

His hobby from early age brought him to this stage, if he did not discover the countryside of his town; Miyamoto would not have developed the desire of creating something that could affect the world. This also distinguished him from many other game designers was that, he never exactly played video games when in young age, spending more time on other activities.

One of the works accomplished by Miyamoto was as mentioned earlier, Mario. This famous and loved character is depicted as a plumber, revealed in an interview with the Game Hunters in New York, that Mario wasn’t originally a plumber. Mario (Right) Luigi (Left) Miyamoto begins to state that the technology back then was not as advanced as today and also not as much room to apply the details needed. Due to the limited size of the screen, he was only able to design a character with a big nose and moustache. The back ground was a construction site; therefore Mario was made into a carpenter.

In 1983, the game had a character named Luigi and the game stage was set underground, thus the decision to make Mario a plumber instead. A statue of Mario in a game shop, indicating how popular the character designed by Miyamoto has become Another moderated design that was applied to the small character was the red hat. Miyamoto reveals that this was to the efficiency of the technology available back then, the red hat was purposefully placed on the character to avoid having to animate the hair, drawing the eyebrows.

The addition made the process and designing more easy and convenient. A question asked was that, if Miyamoto was Japanese, then why were the brothers (Mario and Luigi) Italian? The game designer finally replies that, ever since young age, he was a boy who was interested in foreign comics. Thus, this can be implied that his childhood memoirs influenced his design. A design philosophy conveyed in his designs is to give balance and equality to two factors.

The two factors are the sense of familiarity and the new features within a game. As well as challenging the player, without until to the extent of forcing them to their absolute limit. This is an important philosophy for Miyamoto. The current design trend is the Nintendo 3Ds, and due to the works of Miyamoto, Nintendo has evolved and become more popular. As the game has become world-wide and most well-known in the Nintendo district. Some even believe that Nintendo depends too much upon the Japanese designer. 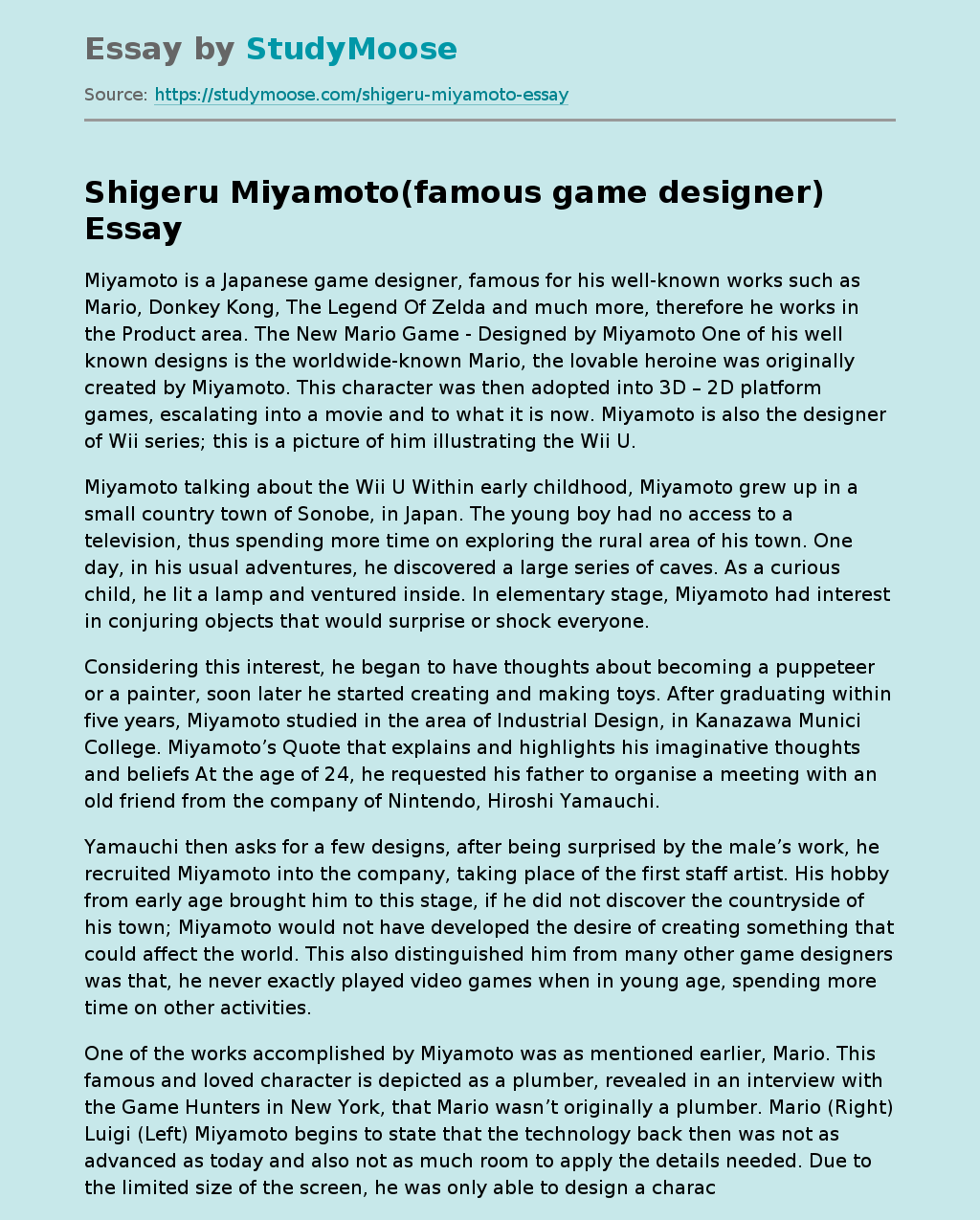